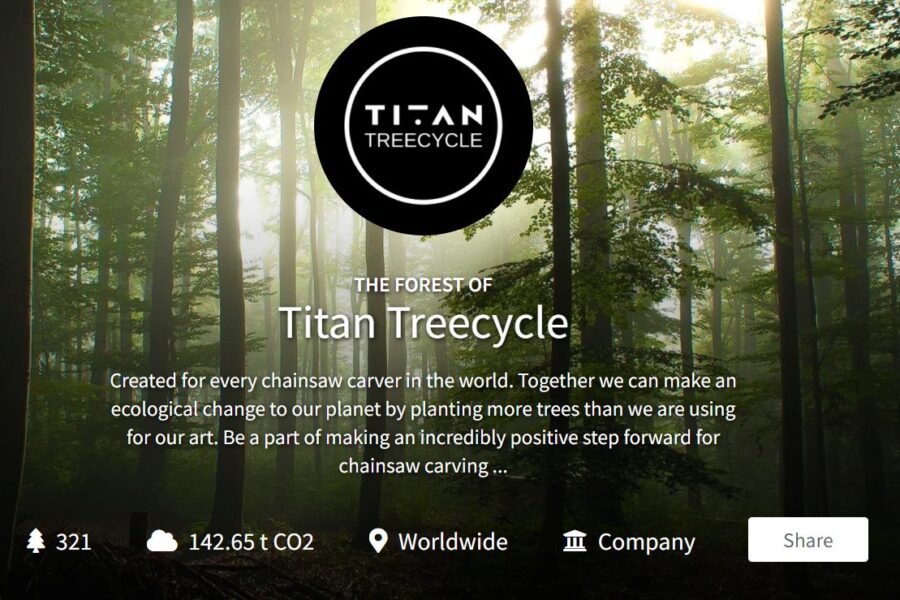 At the start of November, Simon announced he’d joined ‘Team Titan’, and become part of the Titan Treecycle initiative, but we have never explained what that means! We thought we’d use this week’s blog to explain a little more about the project, and why it’s such an important initiative… 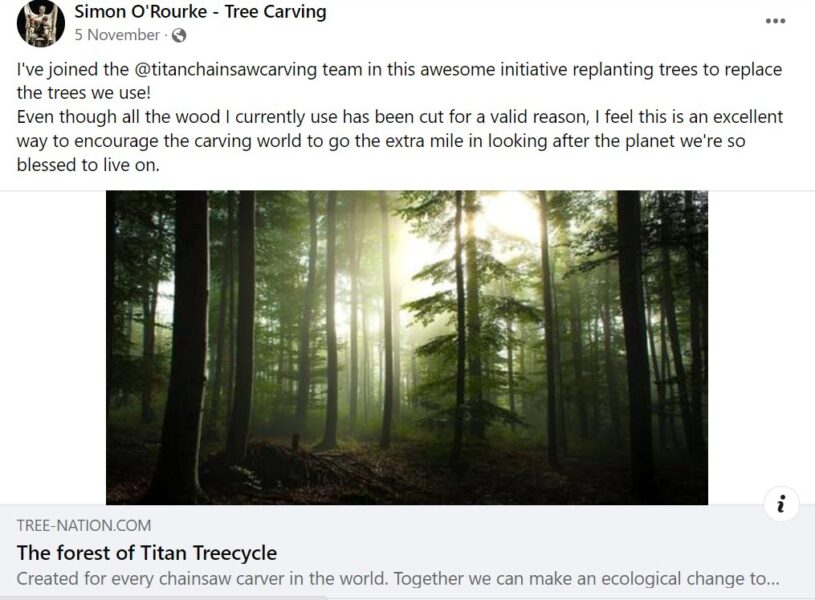 Before we talk about the Titan Treecycle initiative, let’s back up a few steps and start with Titan!

He wants to support, encourage, inspire, and help new carvers – people with an interest to try carving. He also wants Titan to be a place where beginners come alongside pros, somewhere knowledge and inspiration can be shared. 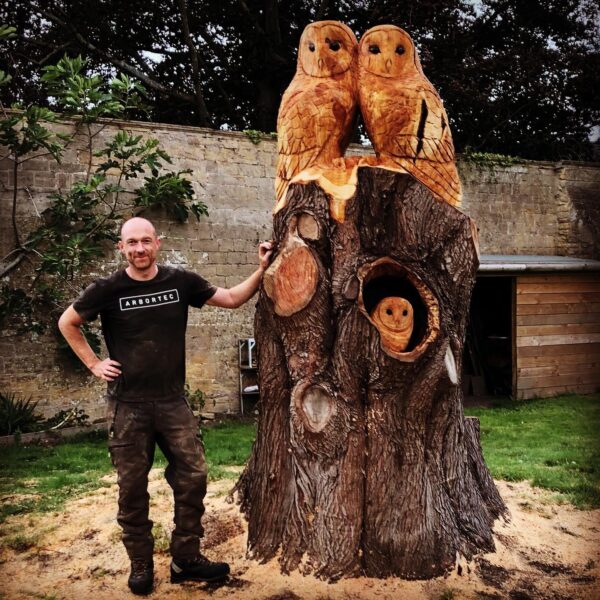 Matt Crabb is the founder of Titan Treecycle initiative
Photo taken from his Facebook page.

To help form that community, Matt has formed a team of world-class chainsaw carvers as ambassadors of the brand. As a team, they will also work collaboratively on large-scale carving projects. Simon is honoured to be one of the team, along with Matt, James Elliott, Mike Jones, Michael Tamoszus, Ryan Villiers, Res Hofmann, Simon Archer, and Hikaru Kodama.
Exciting as this is, Matt also has a bigger out-reaching vision, and that’s where the Titan Treecycle Initiative comes in… 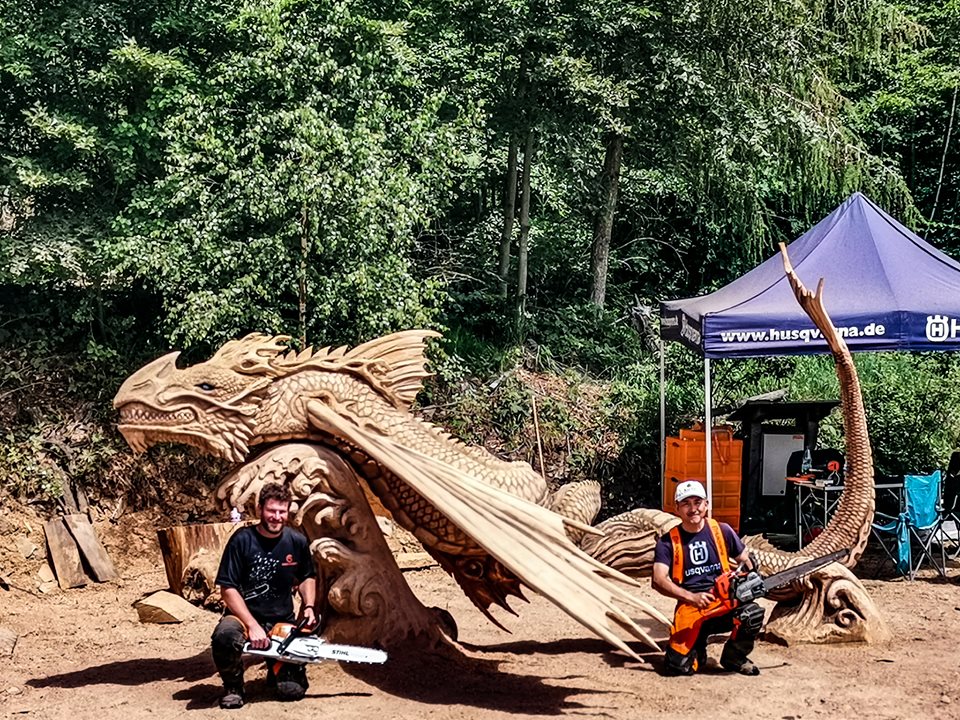 The Vision Behind Titan Treecycle

Matt is highly aware of the situation with climate change and the desperate need for big change in the world (an awareness Simon shares). As a result, one of his goals is to ensure Titan runs as completely carbon negative. What a fantastic goal! This lead him to an organisation called Tree-Nation, and the Titan Treecyle initiative came from that contact.
Tree-Nation has a goal of reforesting the world. They want to use technology to make tree planting easy and provide support, advice and solutions to citizens and companies to help them transition towards a sustainable future.

Matt decided to use Titan and the team’s ever-growing online presence in the chainsaw carving community, to promote an initiative for every chainsaw carver to replant more trees each year than they use. So he started Titan Treecycle.
Titan Treecycle is a ‘Forest’ or project, within Tree-Nation. Chainsaw Carvers can donate money towards the forest, and Tree-Nation uses that money to plant trees in one of their reforestation projects. If every chainsaw carver in the world joined this action, it would make a monumental change to our carbon footprint.

“It should become the norm. We [chainsaw carvers] use up trees to carve luxury items with carbon-emitting tools. Lots of carvers travel around and fly across the world to compete etc. It would be so so easy and at very little cost per individual to offset all of this. If we as a trade could set about this positive change, then perhaps our example can be used to show other trades and industries the way forward.“

Looking at the Titan Treecycle Forest page, so far (December 2021) the group have planted 321 trees and offset 142t of carbon dioxide. A great start in only a couple of months!

The forest page provides updates and accountability for members and supporters

Simon and the Titan Treecycle Initiative

It’s fairly well known that Simon only uses trees that are dead, diseased or dangerous for his sculptures, and never cuts trees down specifically to carve. So why join Treecycle?
In his words:
“Even though all the wood I currently use has been cut for a valid reason, I feel this is an excellent way to encourage the carving world to go the extra mile in looking after the planet we’re so blessed to live on.” 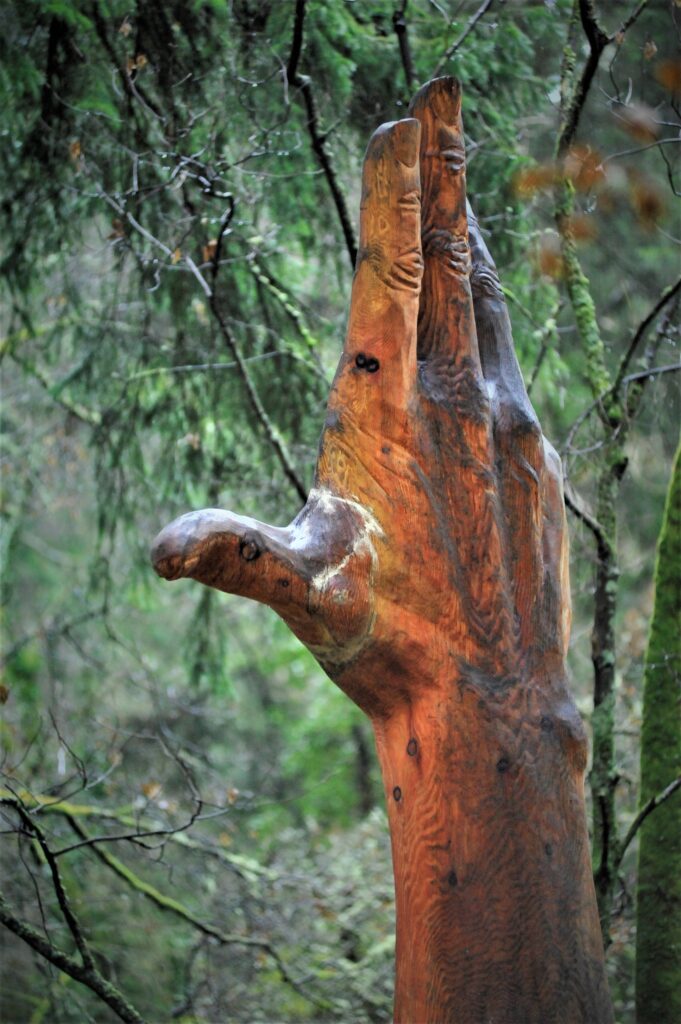 The Giant Hand of Vyrnwy stands in the Lake Vyrnwy estate. The sculpture is one of Simon’s most famous examples of transforming a storm-damaged tree

Remember we mentioned collaborative projects? The Titan team are planning to meet up in England in April this year to collaborate on (matt’s words!) “the biggest and most spectacular chainsaw carving project on earth!”

At this stage we can’t say anything more, but it promises to be epic!

There haven’t been many occasions before this where a large collective of elite professional artists have collaborated together in such a big way. As Matt says, “It’s going to be a very special project and a huge step forward for the wonderful art of chainsaw carving“.

Simon is excited about the collaboration, and of course, we’ll be sharing about it here! 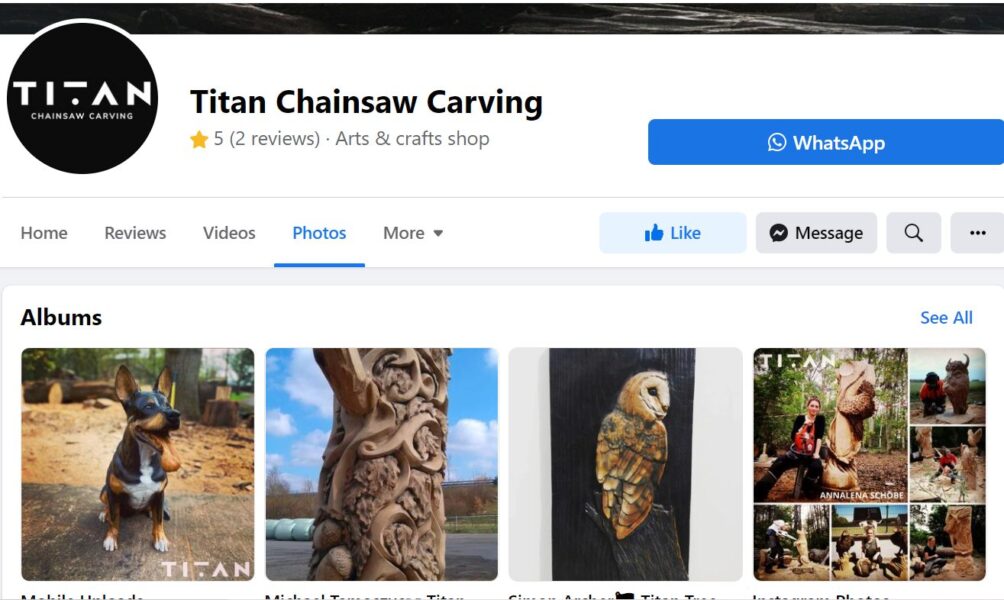 You can follow the progress of the Treecycle team on their Forest page, and find out more about the work of Tree-Nation at www.tree-nation.com 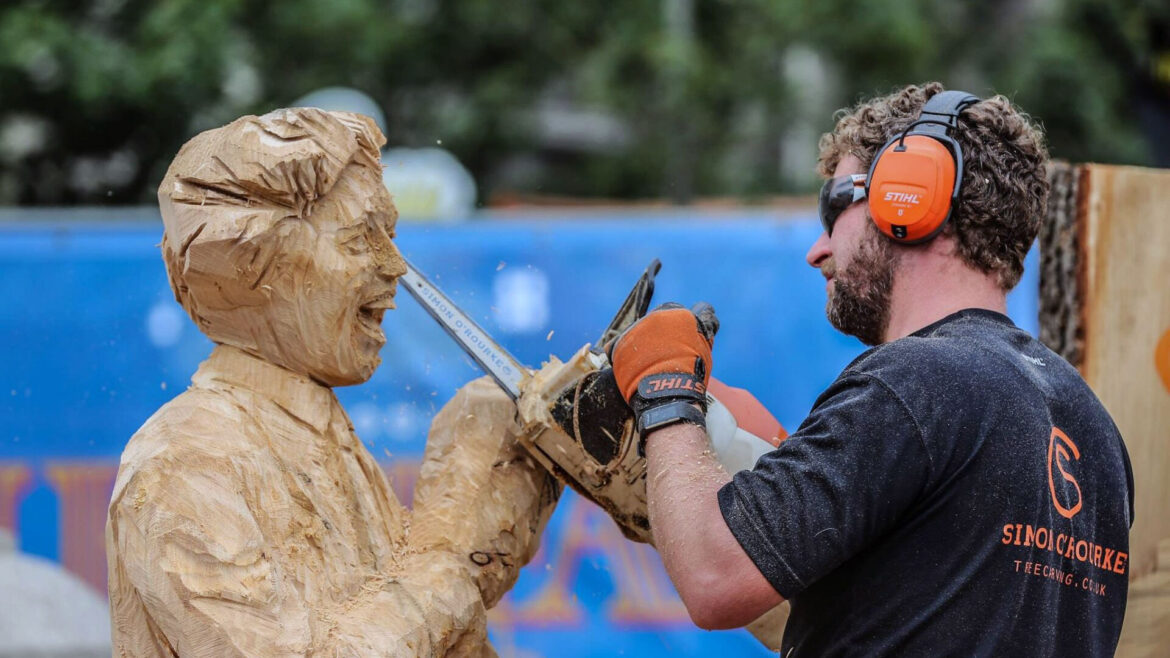 The Impact of Creativity and Art on Mental Health

This week was Mental Health Awareness Week. Although the focus was ‘nature’, we’ll be highlighting the benefits art has on mental health… 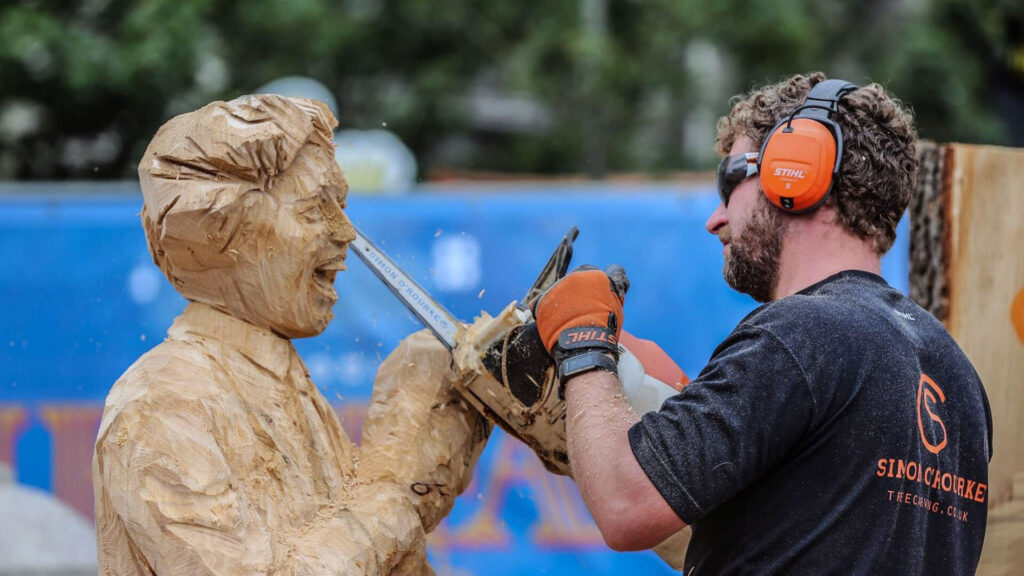 The Impact of Creativity and Art on Mental Health: The Benefits

There’s growing agreement in the world of mental health professionals about the way art can benefit people. The Mental Health Foundation website states that it can help with ageing and loneliness. Their research shows being involved with arts helps boost confidence, and leads people to be more engaged/present/mindful as well as more resilient. Creative arts can also help create community, and alleviate anxiety, depression, and stress. 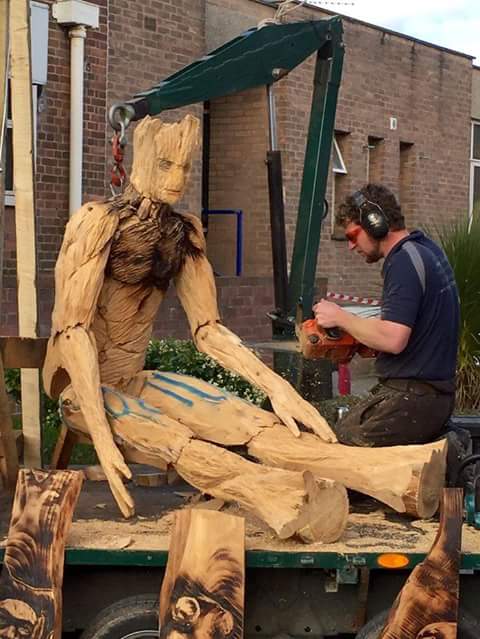 The Impact of Creativity and Art on Mental Health: Application

Obviously ‘arts and creativity’ covers a wide range of skills, hobbies, interests and possibilities. So what exactly are we talking about? Well, in terms of ‘arts’ we mean anything creative! Sketching, painting, sculpting, music, dance, baking, writing….the list goes on! Pretty much anything that involves creating!

But what does it look like? There are a few different ways we can go about using the arts to improve our mental health. These are just a few applications…

Simply take time to create for the sake of creating something that brings you pleasure – whether that be the process, the product, or both. Whatever your craft, just do it and enjoy it! 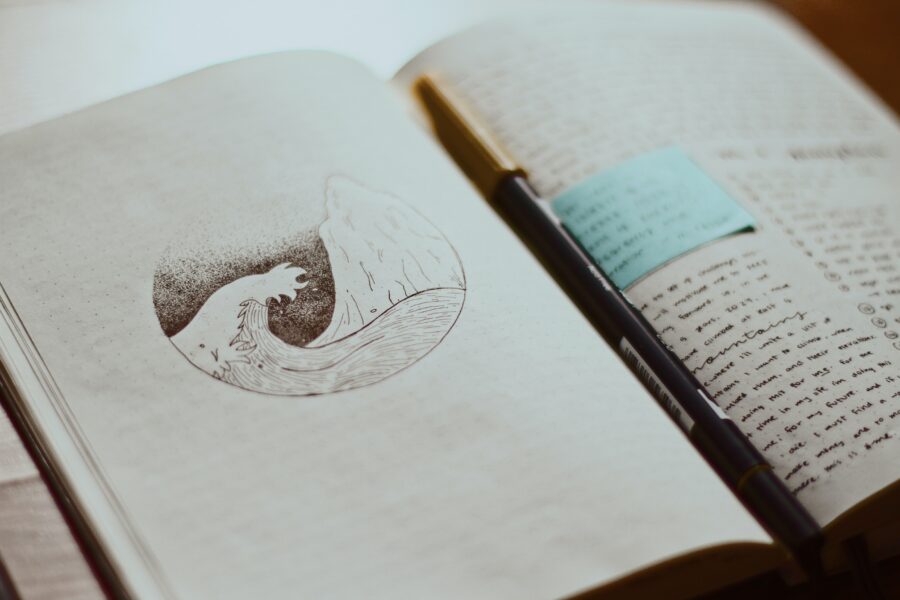 Photo by Noémi Macavei-Katócz on Unsplash

Creative journalling has grown in popularity a lot in recent years. And it’s no wonder!
Taking time to journal creatively (writing, sketching, vlogging…there’s no limit!) improves mental health in and of itself. But it also leaves us landmarks so we can see growth and progress, helps us tell our story, aids us as we process, and can help reveal patterns so we learn both our stressors and the things that bring us joy.

Lastly, formal art therapy. This area is a growing speciality, and there is an increasing number of art therapists available. Always make sure though that you find someone who is accredited and works in association with a supervising body. The British Association of Art Therapists (BAAT) is the best place to start if you are looking to explore this form of counselling. 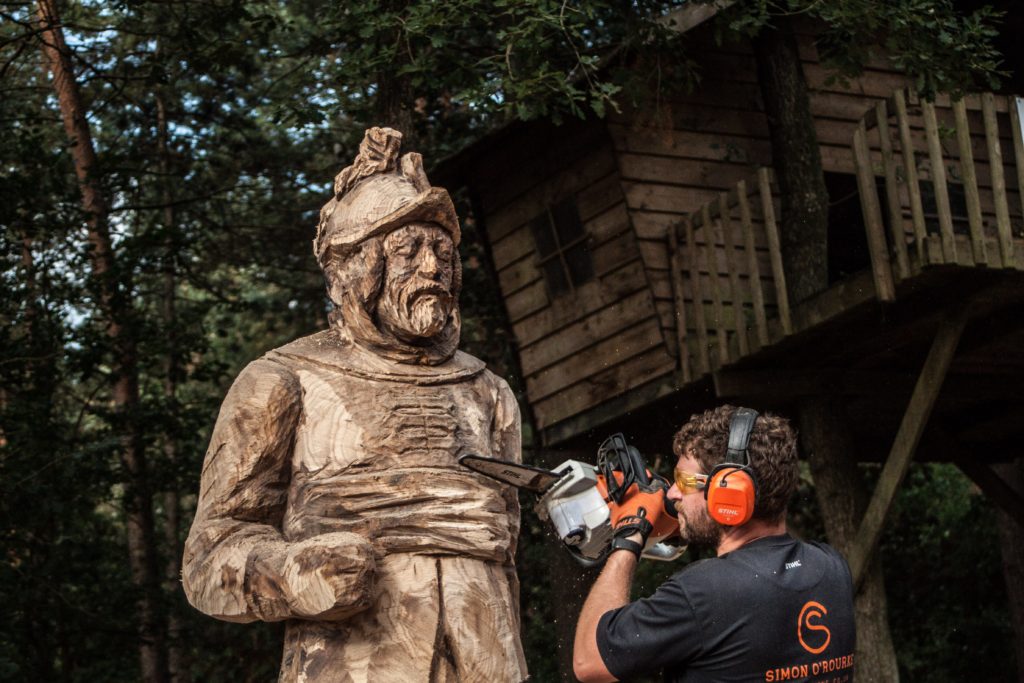 The Impact of Creativity and Art on Mental Health: Simon’s Story

The opportunity to create has helped Simon over the years. In his own words…

“I find working with wood very cathartic, although the chainsaw is such a loud and aggressive tool.
I’ve also found that returning to my roots as an illustrator and creating artwork using pen and ink is relaxing and helps me to focus. I have had times though when I’ve really struggled to be creative and it can be pressure when income depends on completing work within a certain timeframe.”

If you can relate to that and sometimes struggle to be creative (whether that’s because it feels forced or something like feeling overwhelmed by the mess or effort), Simon has learned it’s OK in those times to walk away for a little bit. Go off and do something else you love, like gardening or walking or play a computer game and then come back to it. A ‘not now’ doesn’t mean ‘not ever’! 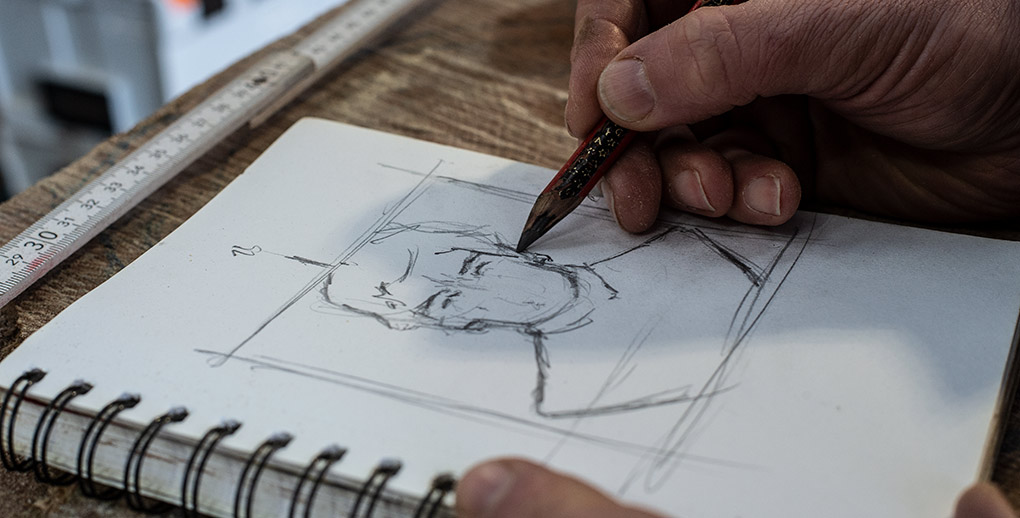 “Over the last 20 years of sculpting, I’ve had numerous ups and downs and have sometimes felt like giving up entirely. It can be difficult sometimes even with a job I love to see past the need to generate income, and I think that happens for anyone. I’ve found it really important to slow down even if it means a drop in revenue for a time. It’s so important for overall health to take time to recuperate and allow yourself to breathe.
I’m not very public with my emotions and feelings and not great at being open with people, but I’ve found that taking time to create something just because I want to, not because someone is paying me to do so is one of the best things. It allows me some freedom to enjoy the creative process without time constraints.” 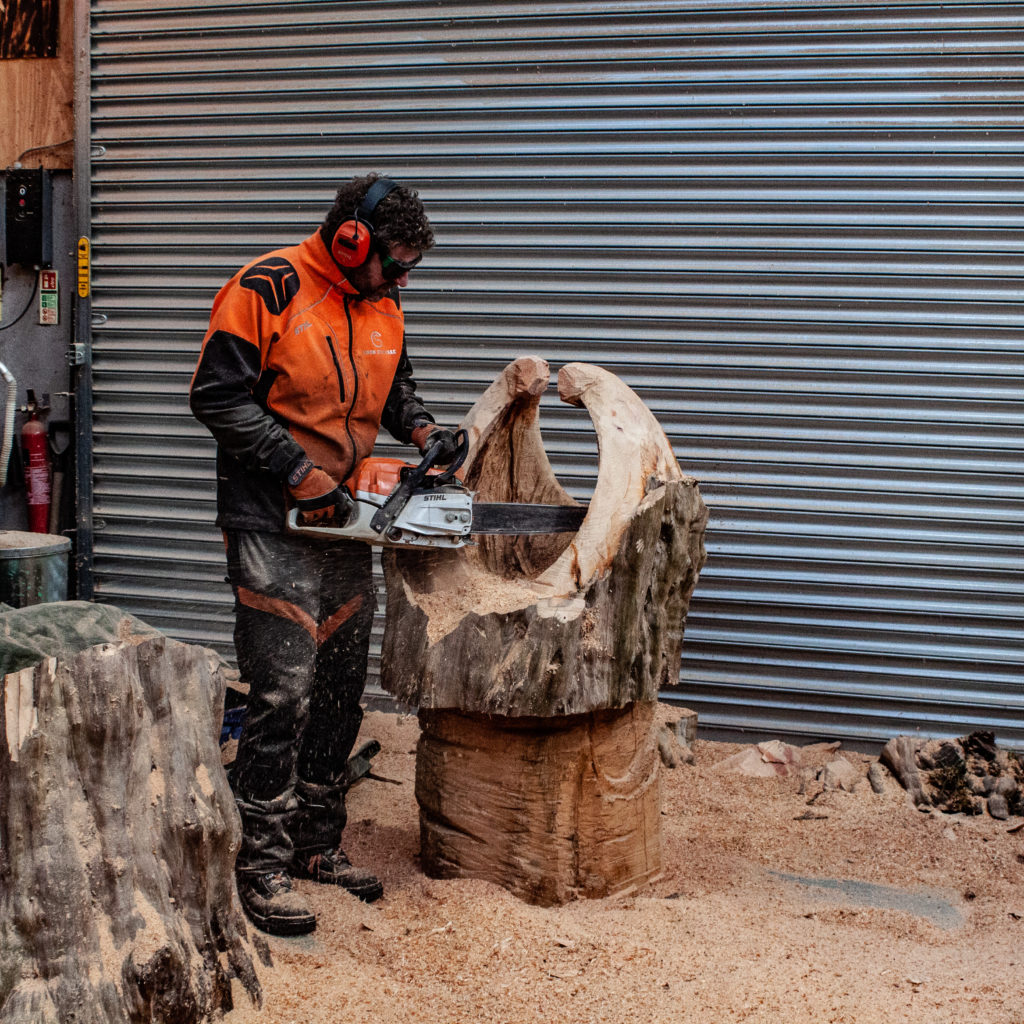 The Impact of Creativity and Art on Mental Health: Final Thoughts

If this has piqued your interest, we definitely recommend finding out more, or just pulling out a camera, pen, pencils or even playdough and having a go! Or perhaps you have a story to share about how engaging in the arts has positively impacted your own mental health. We’d love to hear it!

And as always, to commission a sculpture, connect with Simon via the form at www.treecarving.co.uk/contact/