What else could we blog about on this Jubilee weekend, but the Wellington Heath Jubilee sculpture?!
As the BBC reported, the sculpture actually commemorates not just one, but two jubilee celebrations. A doubly suitable subject for this weekend’s blog! 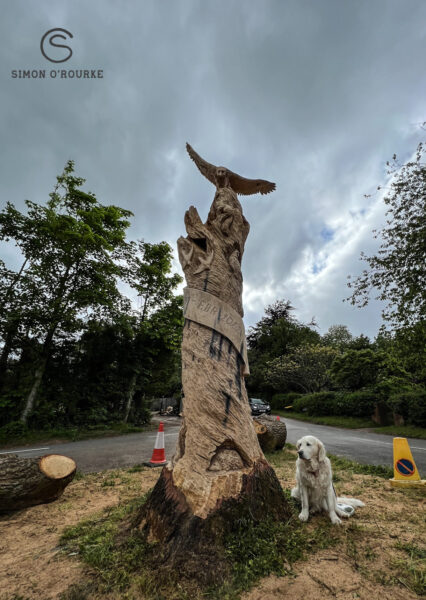 Poppy gives her seal of approval to the Wellington Heath Jubilee Sculpture!

How exactly does this one sculpture commemorate two royal jubilees?
The oak tree was initially planted in 1897 to celebrate Queen Victoria’s diamond jubilee (60 years). Sadly, it died about two years ago. The parish council wanted to turn it into something meaningful rather, and suggested something to mark Queen Elizabeth’s platinum jubilee.The villages jumped at the suggestion, and so the idea was born! When they contacted Simon, the story and history behind it captured his attention – as well as the chance to create a large public piece in a lovely village! 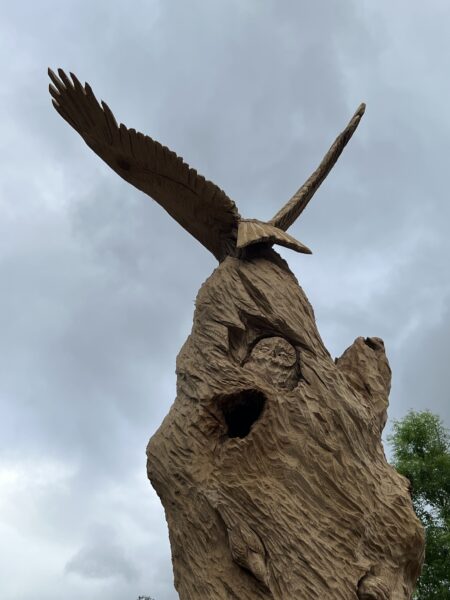 The sculpture is one of Simon’s ‘Wildlife Pillars’ that have been proving quite popular recently with followers on social media. In fact, wildlife has been one of his most requested subjects, whether individual animals, pillars like this one, or his trails at Meadow Park, Fforest Fawr, Page’s Wood and Picton. There’s no room for boredom though! Wildlife is an infinitely varied, beautiful theme and Simon loves to explore the textures and shapes that make up the forms of animals. 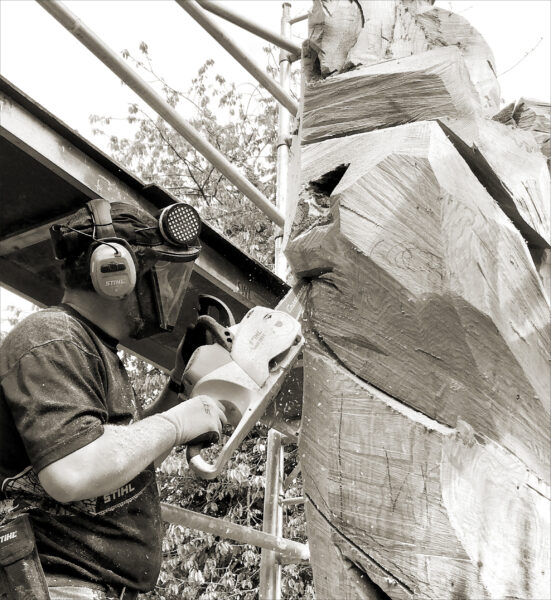 Simon O’Rourke at work on the Wellington Heath Jubilee sculpture

For this pillar, Simon’s brief was to include animals from the local area. In particular, the client wanted a large bird of prey at the top, which they decided would be a red kite.

The only anomaly is a small monkey!
The story behind this is that Wellington Heath is (perhaps a little bizarrely!) known locally as monkey island. Once you know that, the monkey makes much more sense! 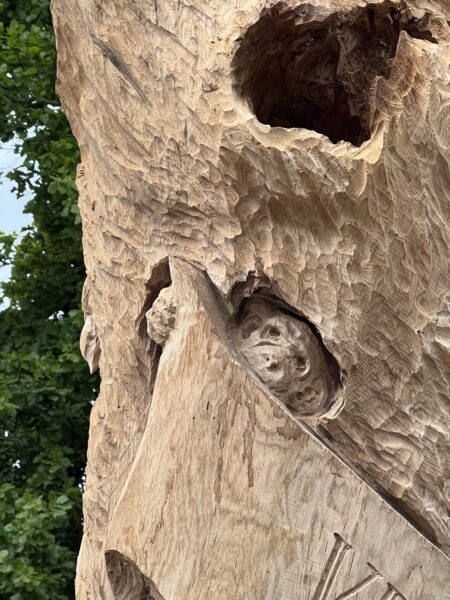 As well as the wildlife, the sculpture features a scroll. As well as giving it a more regal feel, it reads VR 1897 – EIIR 2022, reminding people of the occasion behind the sculpture. 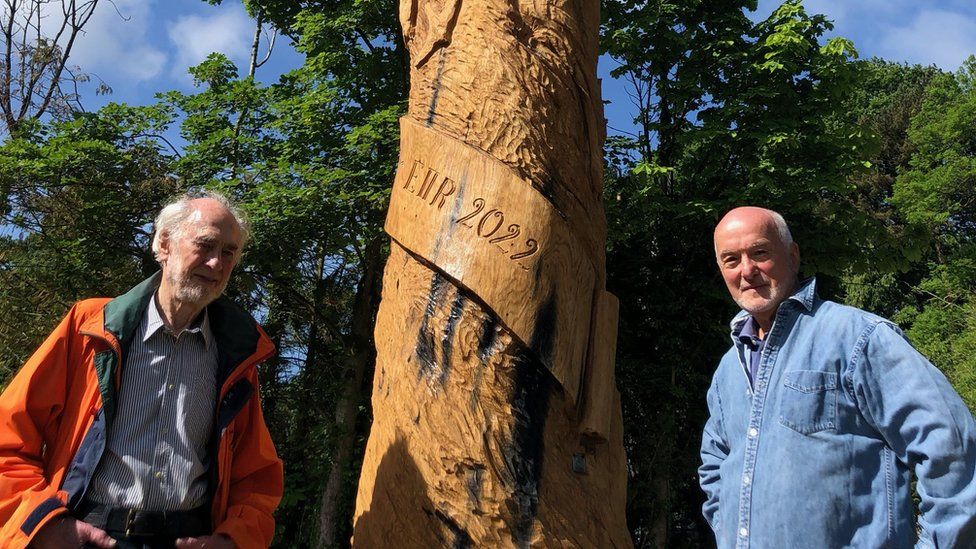 Peter Constantine and David Darwood were both involved in commissioning the jubilee sculpture. The banner gives a regal touch as well as showing what it commemorates. Photo credit: BBC

The Wellington Heath Jubilee sculpture took about five days to create, including assembling and taking down the scaffolding. As is typical of using a natural material, the tree threw Simon some surprises!

There was a surprising patch of rot in the top section which he had to work around. That meant changing the position of the kite, and adding the second wing rather than using two existing branch stubs as planned. 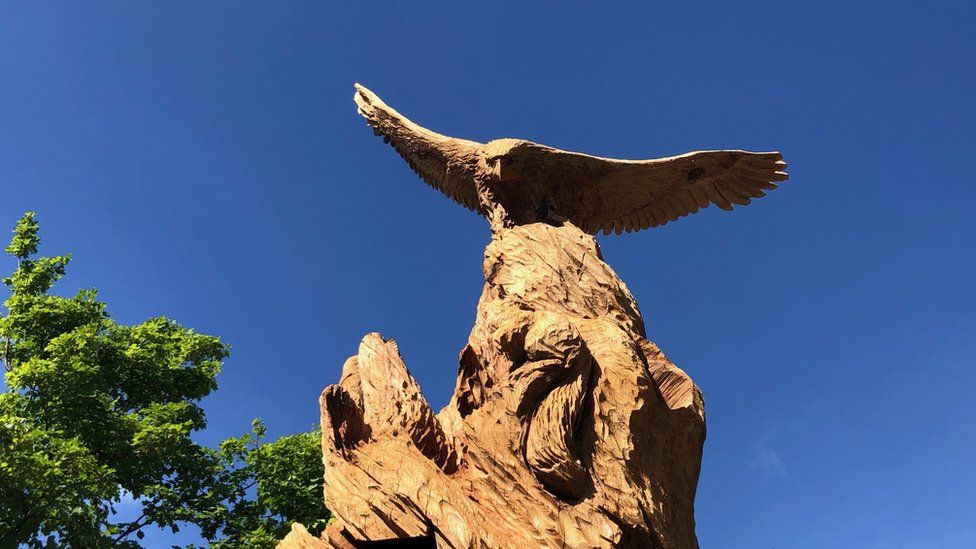 There were also pockets of rot in old branch wounds around the tree. Simon was able to hollow those out though to leave nesting spaces for birds and bats in the hope that the local wildlife will still find the tree a useful place!
Finally,  another challenge was the number of nails he hit! Over the years the tree had been used as a local place for nailing notices.  Metal fragments are NOT a chainsaw’s friend, so this meant Simon spent a lot of time sharpening the chainsaws!!! 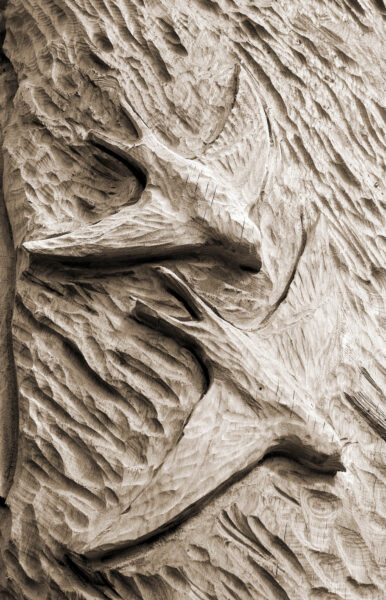 Swallow details in the sculpture

The final sculpture stands around 5m tall and is hopefully something people will enjoy for many more years. We’re sure that when it was planted, nobody envisioned that one day it would become this sculpture (after all, chainsaws at the time were very basic and only used for surgery!) but it’s nice to think they would also be proud of it. 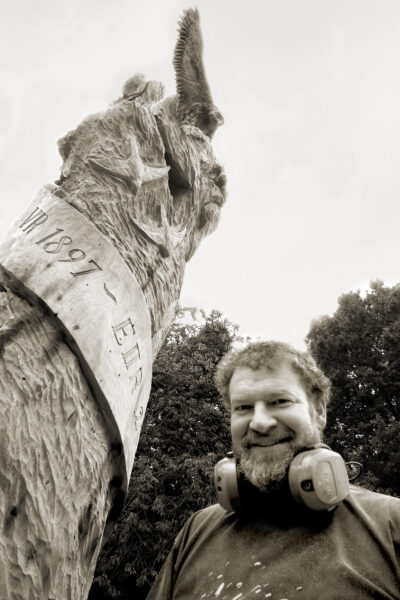 It’s not too late to commission a jubilee sculpture for your own community!