Those of you follow Simon on social media will have already seen his stunning Marbury Lady sculpture.
The sculpture is inspired by a ghost story associated with the former Marbury Estate. People in the area frequently claim to have seen this ghost, as she haunts the park. The most recent sighting is reported as being last year! Simon has carved many figures from books, movies,  myths and legends, but we think this is the first time he has carved a ghost!
We had another reason too for wanting to share her story. The Marbury Lady sculpture is carved from a  tree that died due to salt poisoning. We wanted to share a little more about it to highlight the issue, and hopefully help prevent unnecessary damage and death to other trees. 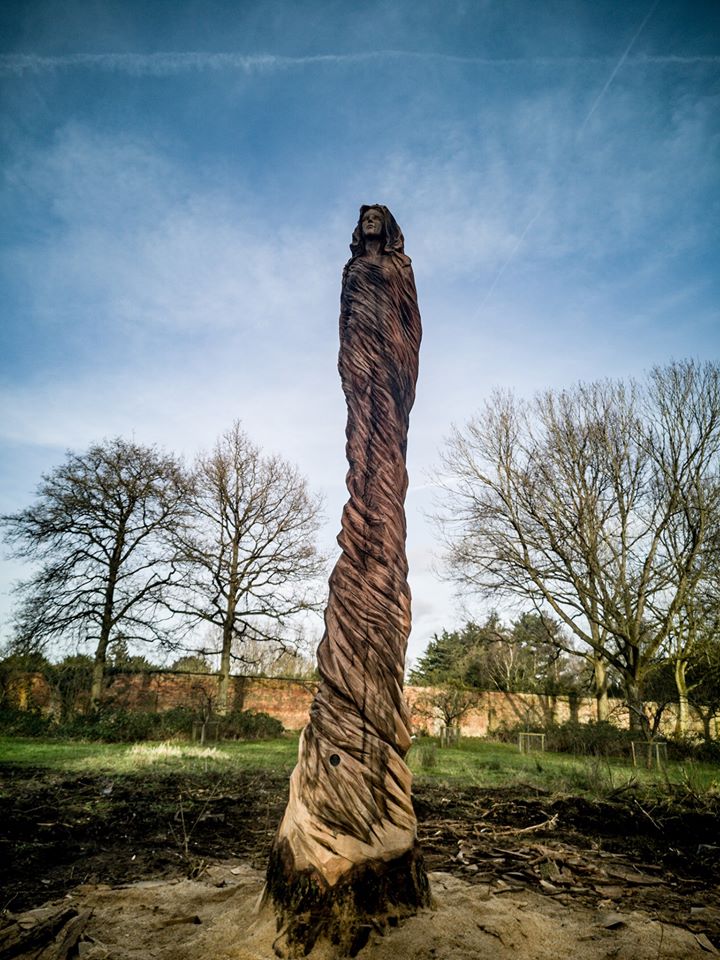 The Marbury Lady viewed from the road

Marbury Hall was a country house in Marbury, near Northwich. Several houses existed on the site from the 13th century, which formed the seat of the Marbury, Barry and Smith-Barry families, until 1932, and the story behind the mysterious Marbury Lady is connected with James Smith Barry, who inherited the hall in 1787.
The buildings have all fallen into disrepair though and no longer exist on the site. It is now woodland known as Marbury Country Park.

For any interested in visiting, it’s a great spot for a walk. You can wander along the mere with splendid views over the water to the church at Great Budworth, or explore the arboretum (the avenues of limes are quite well known) and community orchard. There is also a play area and swimming pool.

The park is cared for by The Friends of Anderton and Marbury (FOAM). They not only look after the park, but have a busy programme of walks, talks, conservation tasks and events. If you are thinking of visiting, it’s definitely worth checking out their website to see what they have happening. It was FOAM who commissioned the Lady of Marbury sculpture, after the death of several of their trees due to salt poisoning. 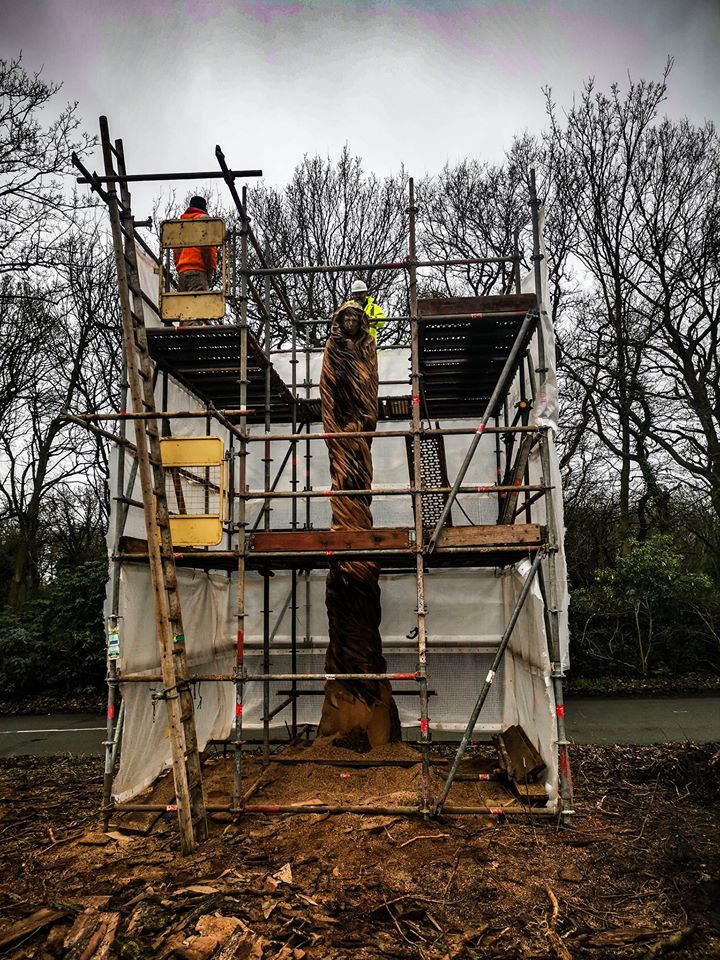 At work on the sculpture

So what is salt poisoning?
Basically if a tree is exposed to too much sodium, it stops the flow of potassium and magnesium. In turn, this stops the tree making chlorophyll. For those who can’t remember their high school science, that’s the ‘green stuff’ needed by plants to turn light from the sun into energy (photosynthesis)! Salt is so effective n this, you can actually use it to intentionally kill a tree –  or any plant!

Salt damage is extremely common, especially in urban areas in the winter when we use salt to de-ice the roads. Spray from the roads hits the tree, as well as being absorbed/spread through running water, and melting ice and snow.

Early sign to watch out for are the edges of the leaves turning brown. At this point it is still possible to reverse damage and prevent death through leaching – basically just adding water to the soil. Good drainage is a key factor too in preventing and curing salt poisoning. If you need to know more, we found this helpful article on reducing the salinity of soil that you might find interesting.

In the case of Marbury Park, the trees were damaged by salt leaking from a split brine pipe.
However, rather than remove them, FOAM decided to give them new life, and commissioned Simon to create something…. 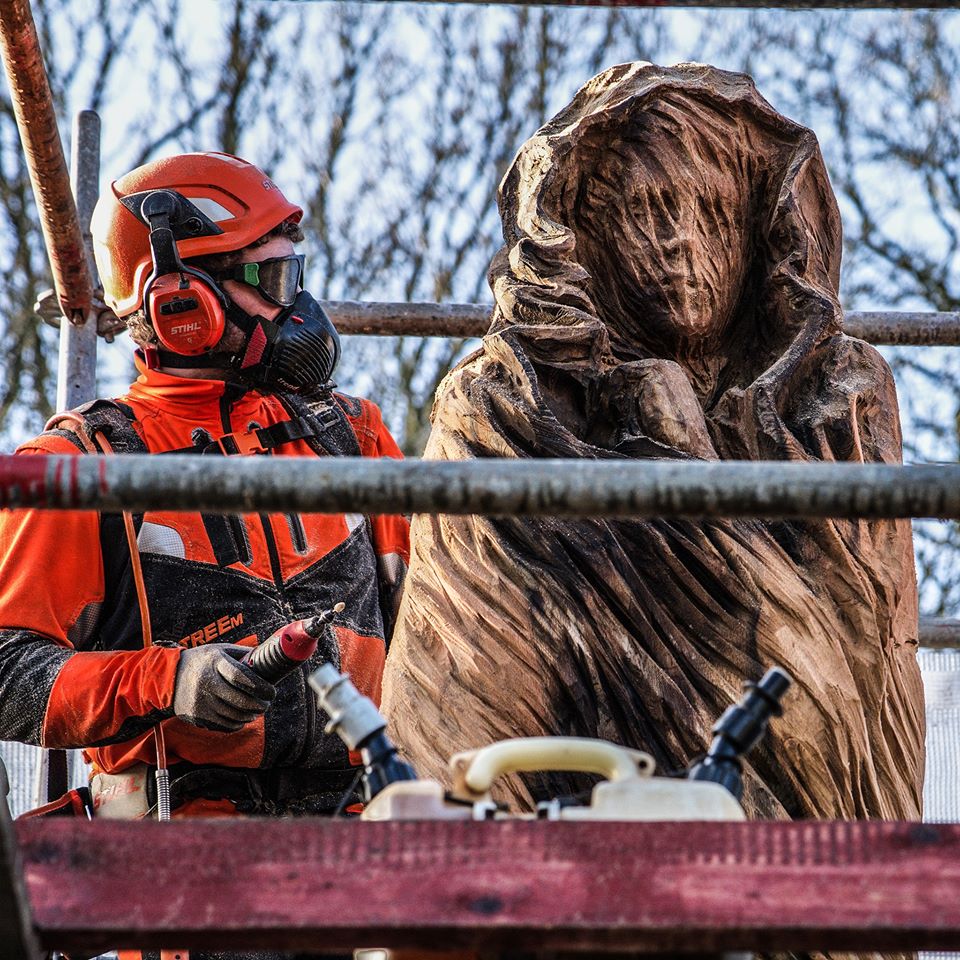 The Story of the Marbury Lady

FOAM wanted one of the damaged trees to represent something of the Marbury Park history. There are several ghost stories connected to the area, but the most well known locally are the variations of The Marbury Lady.

The version Simon chose to tell is of the Egyptian lady. Smith-Barry traveled extensively, and spent much of his time in Italy, Greece and the Levant. It is said that on one of his travels he met with a lovely Egyptian girl. He fell madly in love with her, and when he had to return to England, he told her he would send for her to follow him and make her his wife. As in all good romances though, there was a third person involved, and this is where stories begin to vary. Some say there was an arranged marriage, others a scandal with a housekeeper. Either way, Smith-Barry failed to send for his Egyptian lady….. 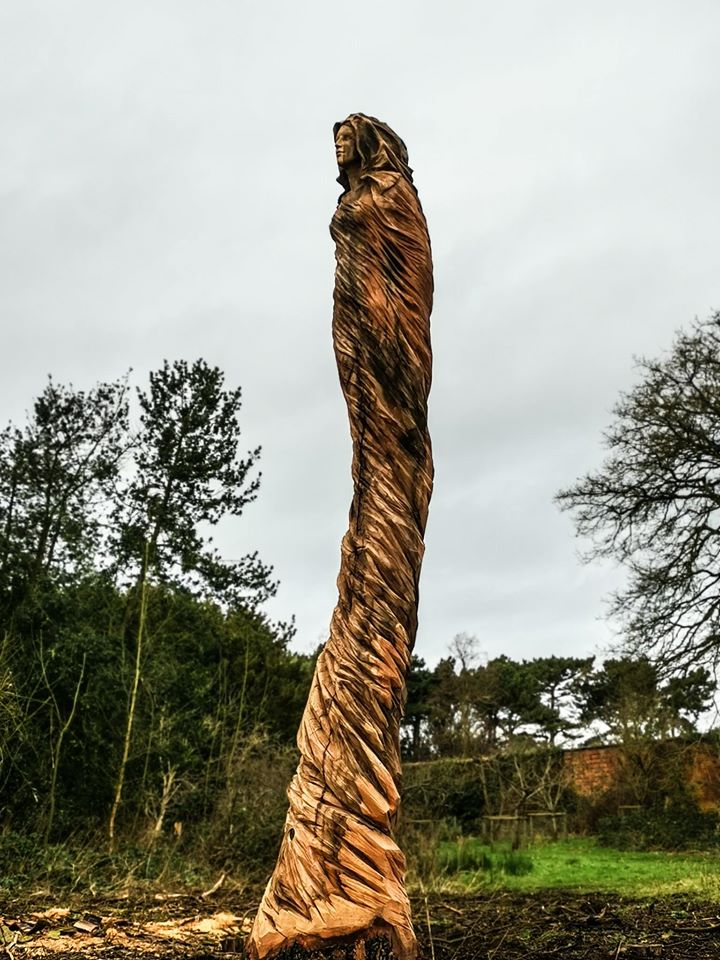 Some time later it is said that the Egyptian lady came to England. Again, stories vary at this point. Some say she worked as his housekeeper, others that he kept her as a mistress. They all agree though that she asked that when she died, her body be embalmed and kept in the hallway at Marbury Hall. When Smith-Barry died some years later, the family didn’t really want what they considered to be a mummy in a coffin! They arranged a burial, and moved the body to a nearby church. What they did not expect however, was the hauntings that would follow!

In the years (decades now!) that have followed, there have been reportings of sightings of a lady in a white veil, and well as tales of strange sounds and happenings. Whether you believe in ghost stories or not, she makes an interesting subject for a sculpture…. 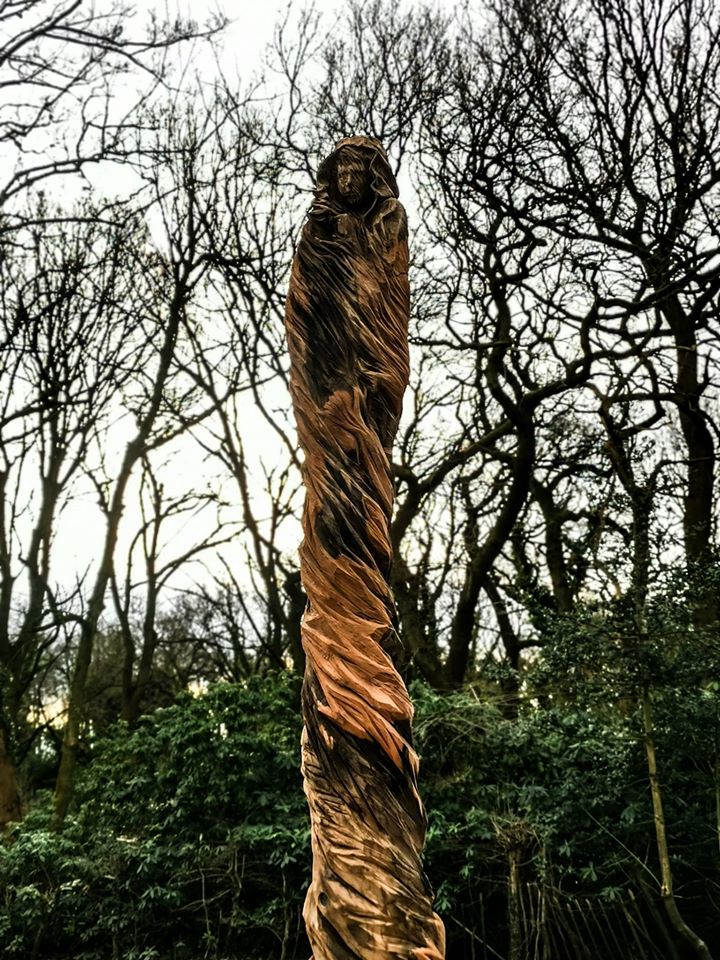 Simon decided to depict the Egyptian lady in his sculpture. However, always creative, he carved her as both a living person AND the ghost! He sculpted the face that faces the road to show the girl alive. Her face is smooth, her expression regal, and proud. The orchard view shows her eyes closed, hands clutching her chest, giving the story of her sad demise. Her face is also covered with fragments of veil which reflect the accounts of sightings of The Marbury Lady.
As well as depicting her in both life and death, Simon did this because he wanted to encourage people not just to view passively, but to physically engage with the sculpture. In carving her this way, people have to physically move round to the other side of the sculpture to see the full story. 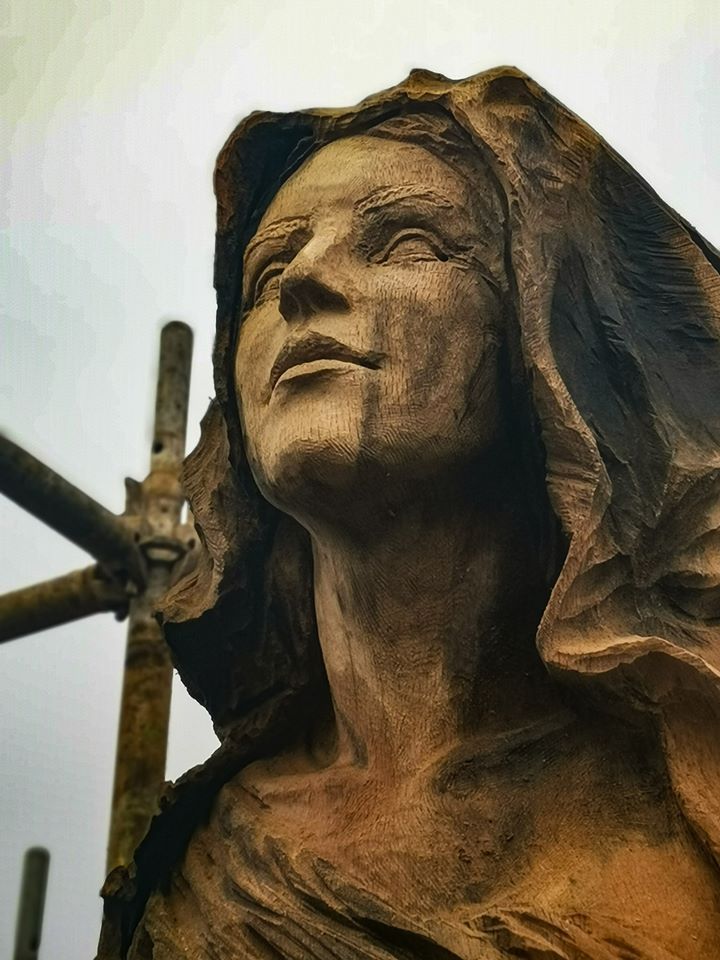 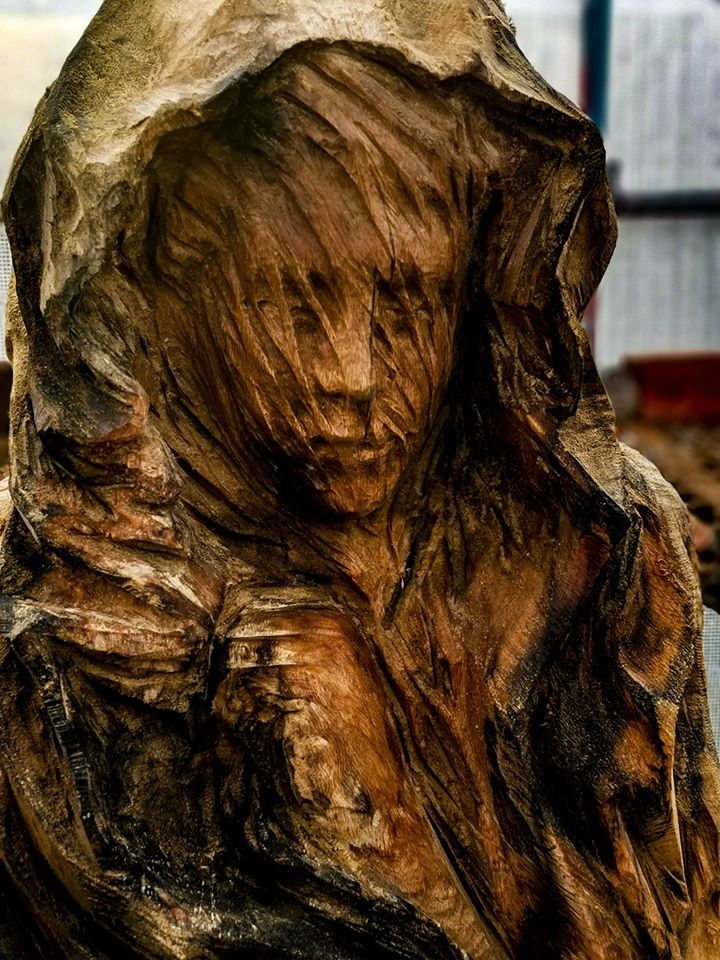 The side depicting the ghostly Marbury Lady

A Test of Skill

Simon had been looking forward to this project ever since it was approved last year. She wasn’t without her challenges though. To begin with, their is the challenge of carving a standing stump, rather than a piece of timber in the workshop. With a piece of timber, it may be tricky to source another ‘perfect’ piece….but it can be done. With a standing stump that is being transformed, there is only one chance! No room for mistakes! 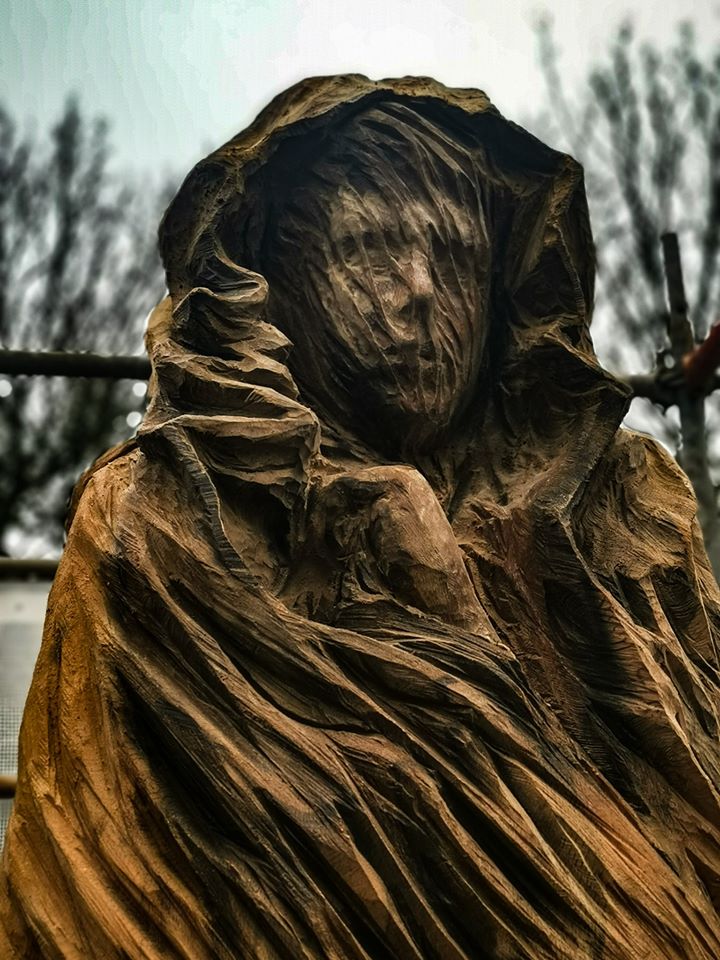 The other distinct challenge (and a first for Simon on a commission) was the veiling over the ghostly side. When painting or drawing, it is possible to draw the whole face, then ad the veil over the top. Even in sculpting with clay or similar, the veil is added. In the case of tree carving, Simon could only take away. That meant not only using technical skill and tool like the golden ratio to envision the correct proportions and expression, but being able to do so whilst also imagining where and how the veiling would fall, and taking into account having to leave that behind. 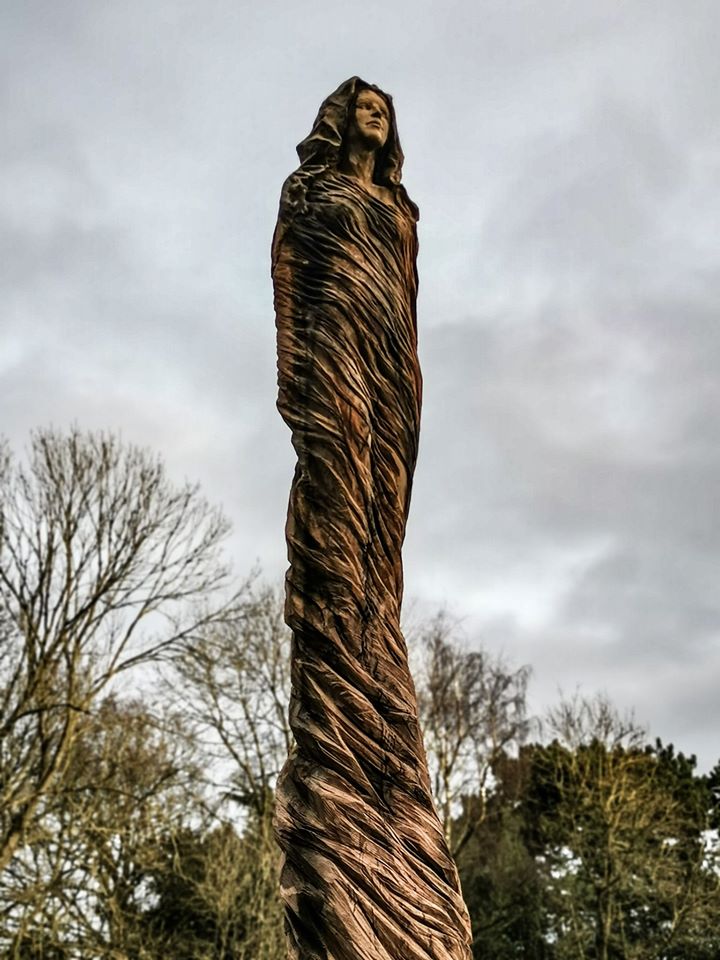 Tools of the Trade

As always, he cut as far down as he could with his larger Stihl chainsaws, before using manpatools angle grinder followed by the saburrtooth bits (especially the large flame bit) to finish the detail and texture. We’re sure you can imagine too, working at the top of all that scaffolding, the cordless saws with backpack for holding the battery pack (Stihl) were essential!

Looking at the finished sculpture though, you can see Simon rose to the challenges, and created something absolutely unique, relevant to the area, and enthralling for the viewer. Thank you to Filmage.co.uk for the video!

Here's the time lapse video of the Marbury Lady! Thanks to filmage.co.uk for the excellent editing!

We think this is one of Simon’s best examples of sculpting female form, and certainly stands alongside his Spirit of Ecstasy, Angel at the Pool of Bethesda and Viking Raid. Which are your favourite of Simon’s female sculptures? Why not comment below and let us know?!

And, as always, if you have a damaged tree that you would like to breathe new life into, email [email protected] to talk about some possibilities.

On Working with Acton Health and Safety