The Great Resc-yew (rescue): Two Towers and a Dragon

Two Towers and a dragon.
Sorry, nothing to do with the movie! Although if you enjoy Tolkien, you could read our blog about Simon’s Lord of the Rings sculpture.
Rather these two towers and a dragon were straight from Simon’s imagination. As well as telling a story, they are actually also a happy ending in themselves! Read on to find out more about ‘the great resc-yew’… 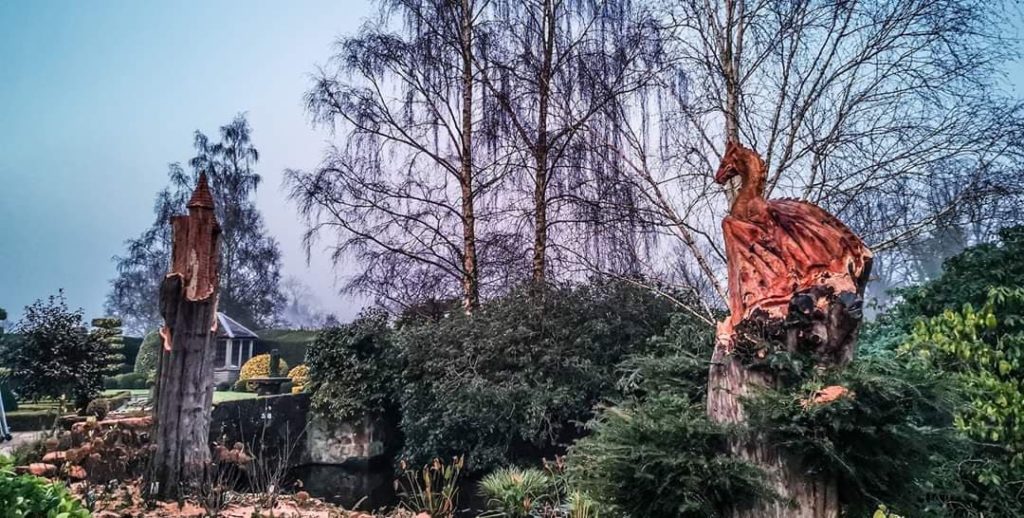 These stunning sculptures began their life as yew trees (now the ‘rescue – rescyew puns make sense!) which had become problematic. Yew is a fascinating and beautiful wood which grows in all kinds of shapes and patterns. They are some of the oldest trees in the country, are great for making all kinds of things. This ranges from carving household objects and art to furniture. Most famously though, they have the reputation of making the best long bows! However, that wild beauty can sometimes cause problems for the landowners.
In this case, they were growing too close to the house.

Initially, the owners had the tops removed, but it turned out that wasn’t going to be a good long-term solution. Rather than remove them completely, they decided to turn them into a different kind of beautiful – a Simon O’Rourke sculpture! All projects have their points of fun and excitement, but one of the things Simon enjoys about this kind of commission is the sense of giving life and purpose back to something that had either died, was damaged, or could no longer remain as it was. Even better when it’s something as fun and unique as this fairytale sculpture!

Incidentally, if you have trees which are becoming problematic, read our blog about Treetech, a tree surgeon we work with and recommend to give you an evaluation! 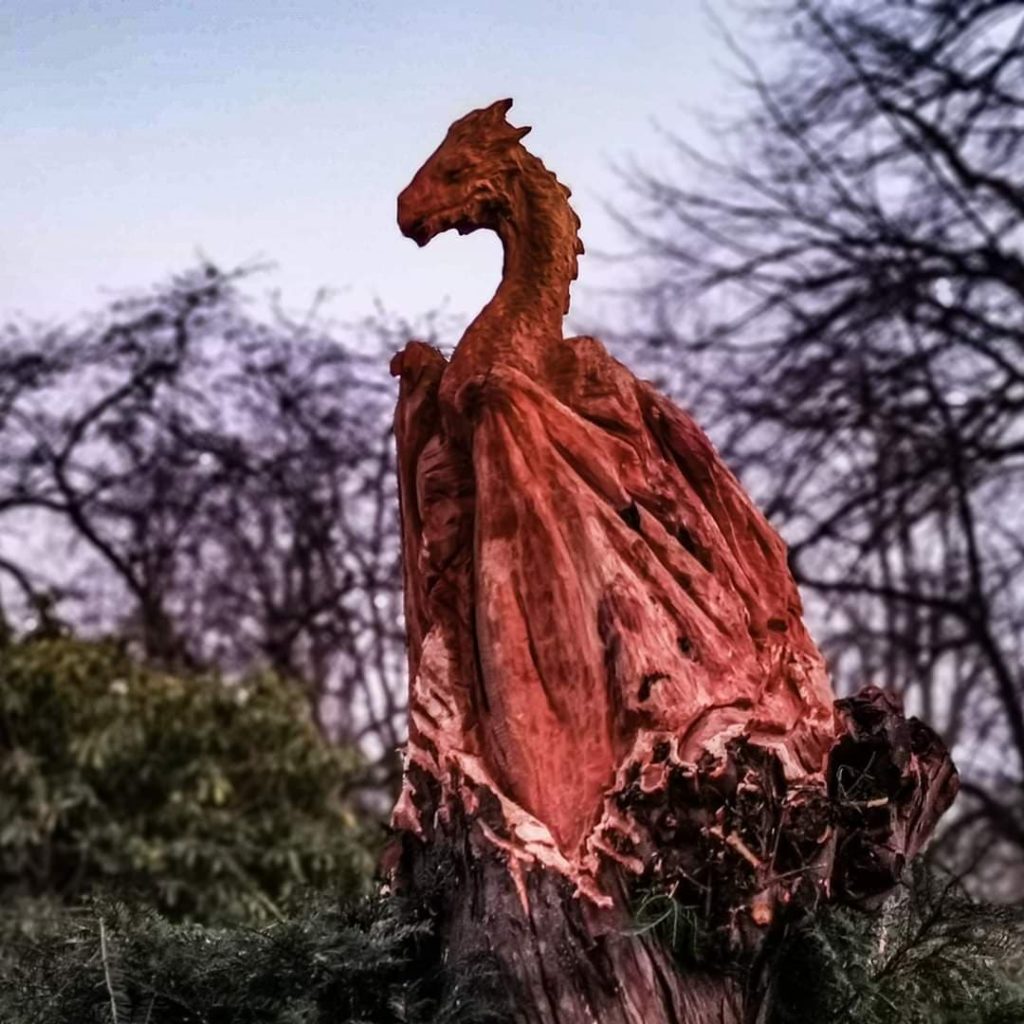 After chatting with the owners about what they would like, Simon went to work, employing not only his skill, but his creativity and imagination to create this scene from a story Tolkien or C S Lewis would be proud of!

Simon kept some of the bark to allow the trees to blend in more with the rest of the garden. This also adds age and authenticity to the towers, as if they are something from an long-ago, far away adventure. He created the initial shapes using Stihl chainsaws, then used his Manpa angle grinders and chainsaw bars, and Saburrtooth bits to create the details and added texture. The beautiful natural patterns within the yew combined with Simon’s deeper cuts that mark the stone and tiles, to create the feel of ancient stone towers that have been weathered over the years. 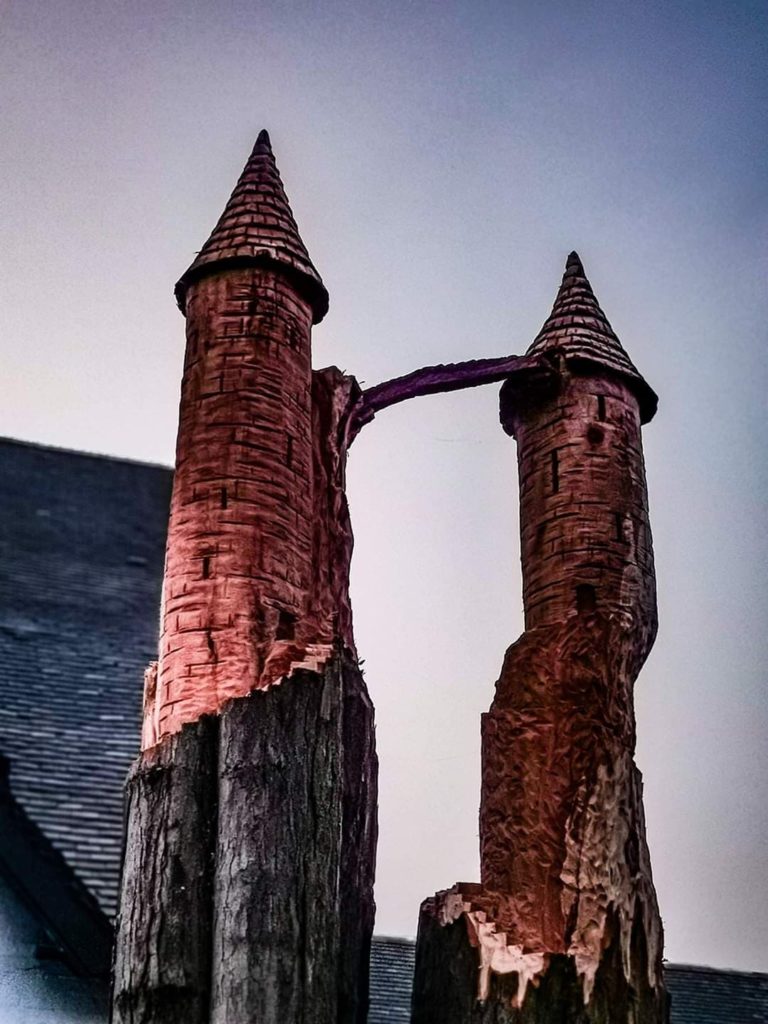 Choose Your Own Adventure

One of the fun things about a sculpture like this, is it not only looks great, but sparks the imagination. This is something that is important to Simon in every sculpture he creates, and even shares in his biography that he wants “people to feel like they’ve experienced part of a story”

In this story, with the two towers and a dragon, the castle is under threat from the dragon. As we look at him, we see he is quietly watching, formulating his plan, and resting his wings, which although relaxed at this moment, are clearly powerful and large.

But what happens next?

Simon has set the scene and created a stunning piece of art, but the rest is up to you.
Can the towers withstand the attack?
Who or what is within them to attract the dragon?
Who will be victorious and how?

We think it would be wonderful to spend a summer’s evening in this garden – perhaps after a BBQ with a glass of your favourite drink in hand – inviting family and friends to tell the rest of the story. What do you think happens next? How would you end this great resc-yew story? Why not comment below and let us know!

As always, if you feel inspired by this week’s featured carving, you can talk to Simon about commissioning something unique for your home and garden. Contact us on [email protected].

Our Affiliates: Working with Treetech