The Giant Hand of Vyrnwy

In 2011 Simon carved what would become known as The Giant Hand of Vyrnwy. Simon wasn’t very well known at the time, and social media was only just in its early days. The hand gained some press coverage and attention, but it faded quite quickly. Recently pictures of the hand were re-shared on Facebook and Twitter, and it’s gone viral! Simon is getting lots of shares, comments and questions, which is incredible. Many people have never heard the story behind the sculpture though, so we thought we would revisit the story behind the Giant Hand of Vyrnwy. 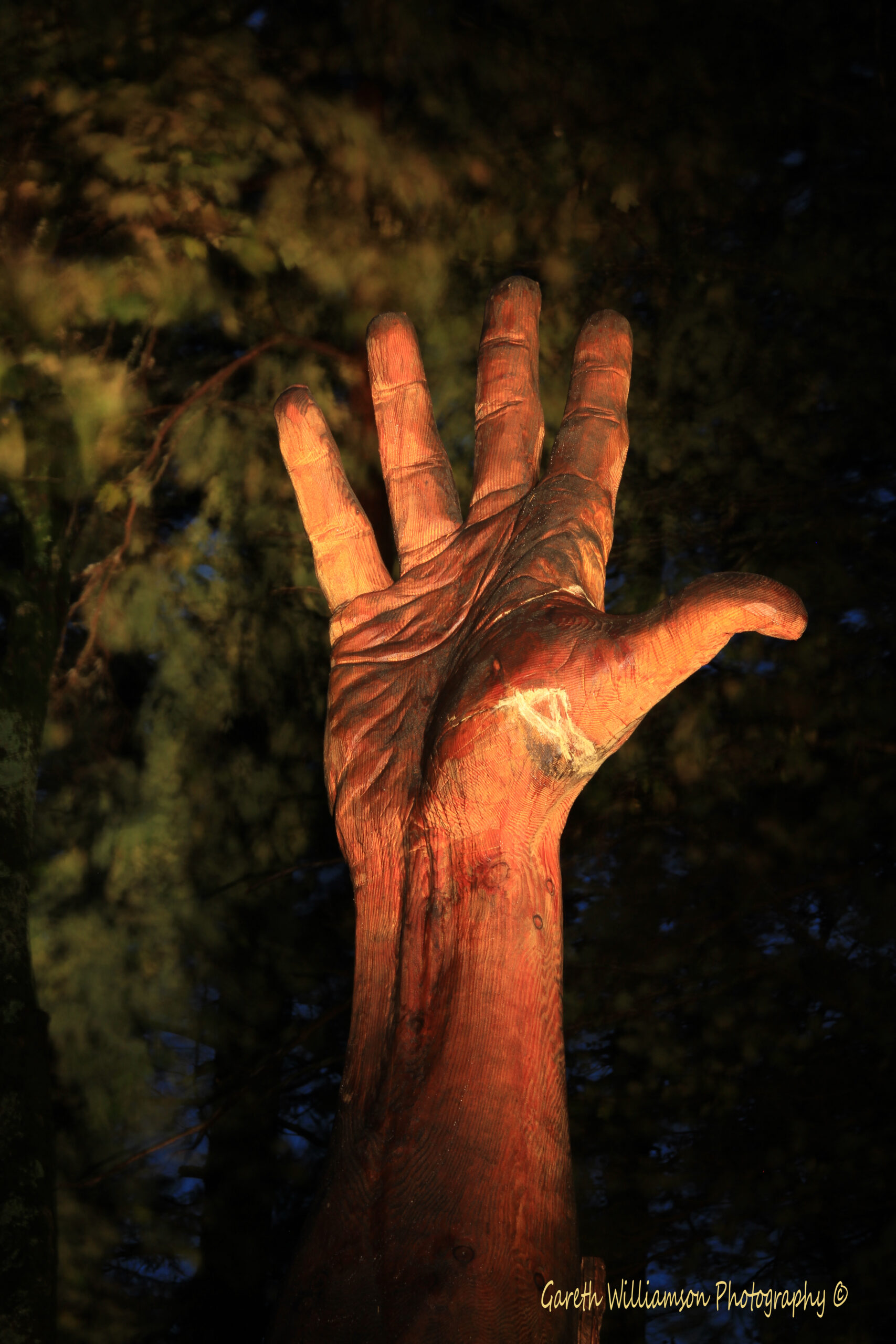 The Giant Hand of Vrynwy by night

The Giant Hand of Vrynwy: About Vyrnwy

The history of Vyrnwy itself is controversial. Viewers of ‘The Crown’ may have heard it mentioned recently in season three of the popular Netflix show when Prince Charles visits the home of his language teacher in Aberyswyth. The topic is clearly painful, and it’s suggested that the Prince was deeply moved by the story.
Years on, less people are aware of its past, and nowadays the area is now known for its beauty and wildlife. And no wonder! It’s just on the edge of The Snowdonia National Park, set in the middle of the beautiful Berwyn Mountains. There is a 24,000 acre RSPB Reserve, with viewpoints and hides around the Lake to observe the amazing variety of birds and scenery, and lots of opportunities for walks, cycle rides, and adventure activities. 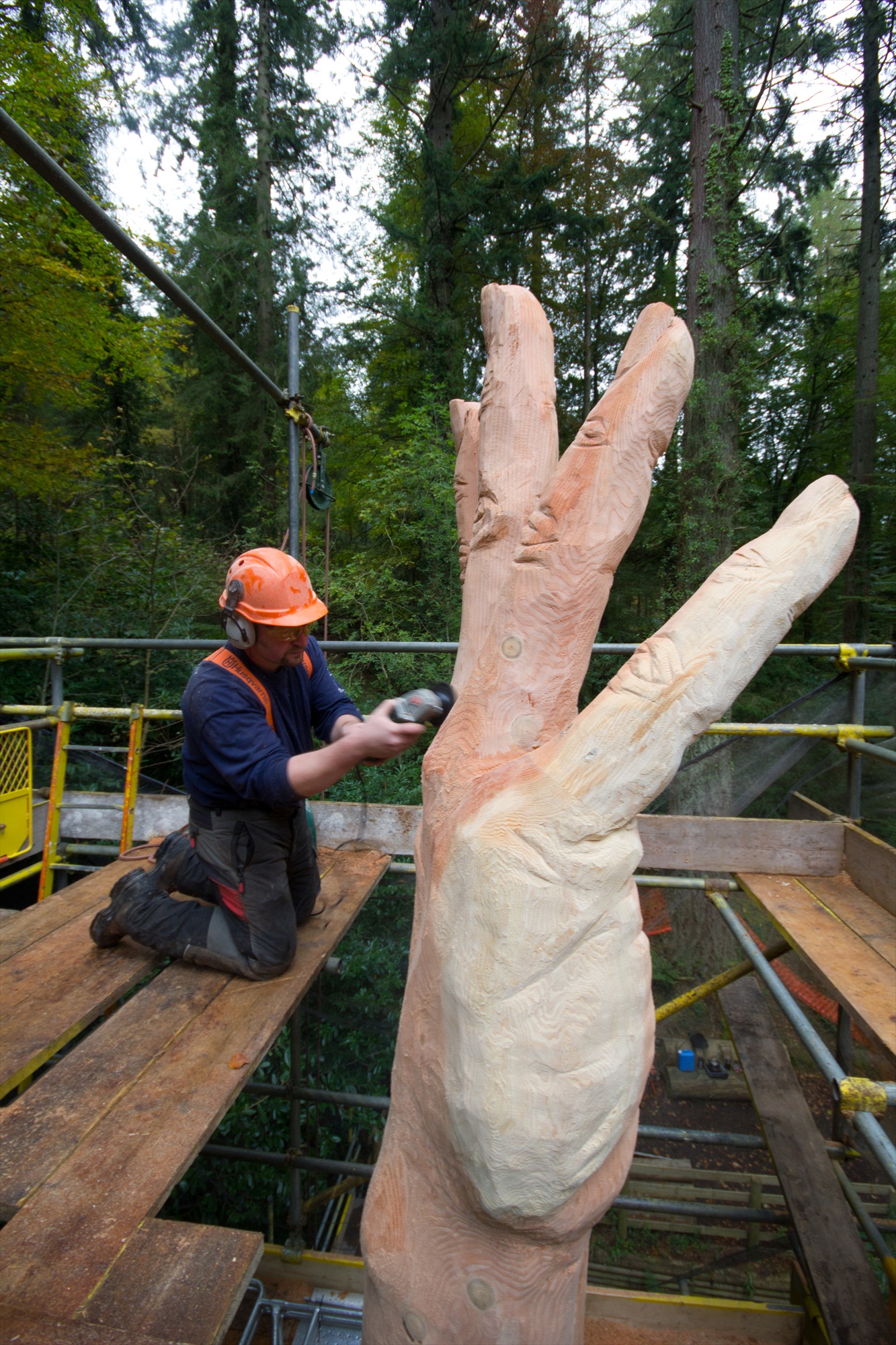 The Giant Hand of Vyrnwy: The Commission

Simon’s commission to create the hand came about in a very roundabout way. One evening he watched an episode of Countryfile that featured Wales’ tallest tree. He learned it was damaged and needed to be felled. He then heard elsewehere that they were leaving a 50ft stump, and were looking to convert it into a piece of art. It seemed like a great opportunity, not just to create a sculpture, but to create something with a message. After a bit of research, he connected with the Forestry Commission and was given the brief for the project. He added his proposal to those from the other artists, and waited… 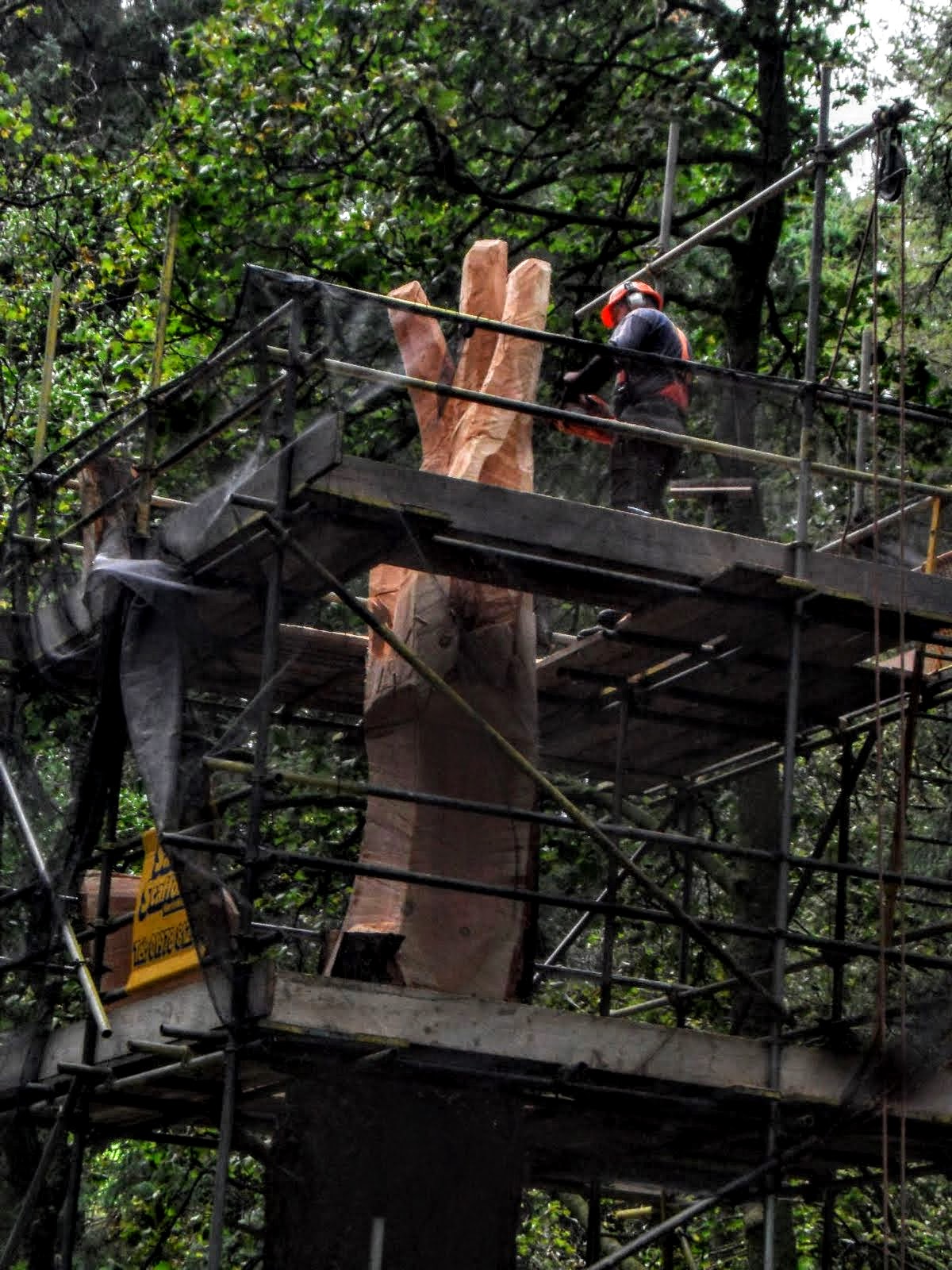 Simon’s vision for the tree, was for it to not just be a sculpture, but for it to be an environmental statement in its own right. Having learned that the tree had been known as one of the ‘Giants of Vyrnwy’, Simon was inspired to create a giant hand.
He wanted it to be coming out of the earth, and reaching upwards; making one last attempt to reach the sky. He wanted to show the hand stretching and straining; fighting to reach its full height. This is why Simon highlighted veins and creases, and why there is visible tension and power in the hand. It reflects a battle against not only the elements, but also damage humans have done.
The changes in colour and tone of the wood have emphasised those features, so the sculpture tells its story more loudly now than when it was made. 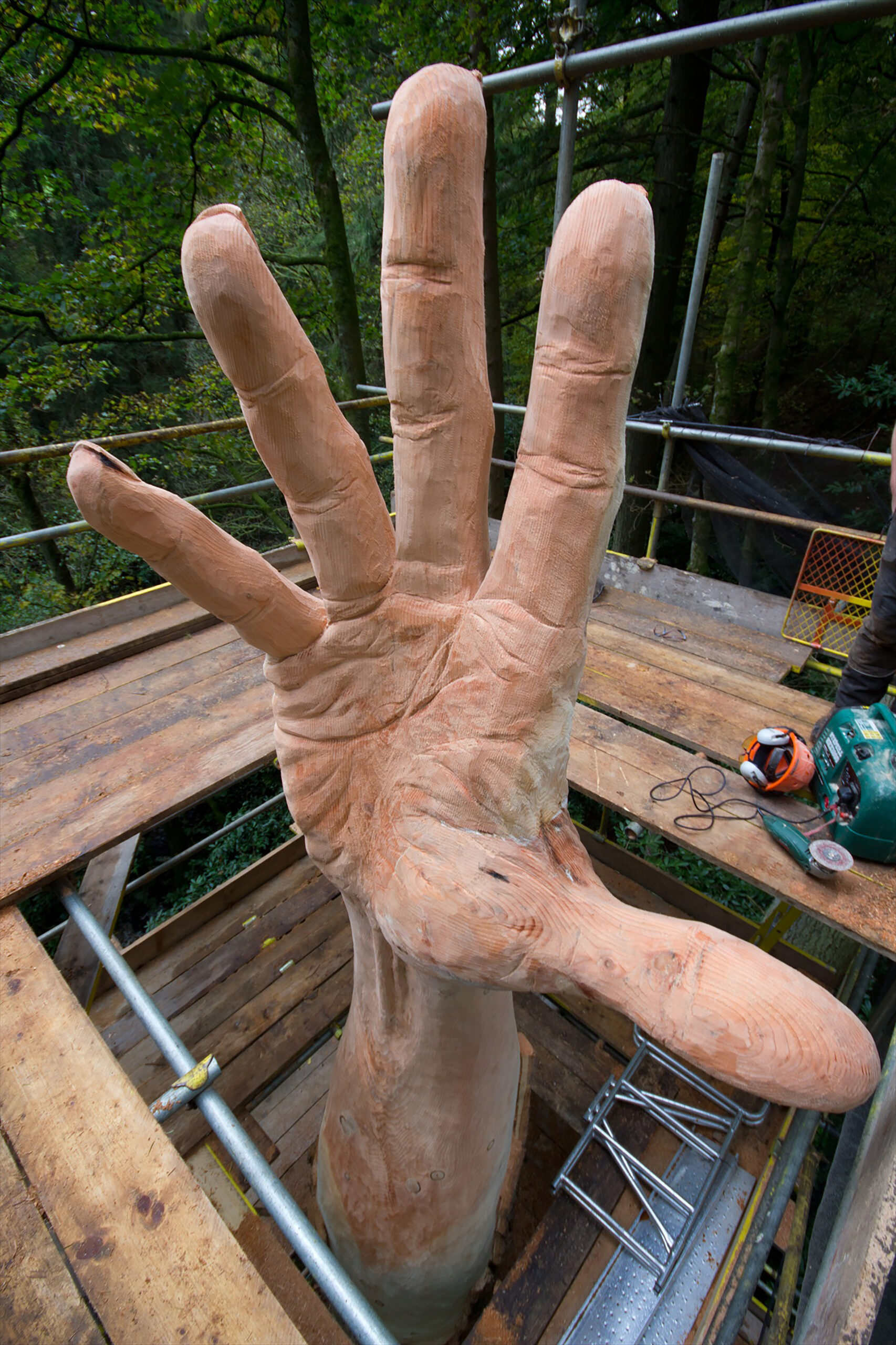 This close up shows the details Simon added to reflect the strain of the tree’s final reach for the sky.

The Giant Hand of Vyrnwy: Creating the Sculpture

Simon started work on the hand in October 2011, and it was definitely a challenge! Even today, it is the largest-scale work he has completed! In photos, it can be difficult to really understand the scale of the sculpture. The sculpture is also viewed from 30′ away too, so although up close the size is impressive, it can be hard to appreciate.
To help give some context, Simon used a scale of 1:10 when he worked out the size and proportions. This means that the length of the hand from wrist to fingertip is around 2.25m. Or 90″ in ‘old money’!!! An average male in the UK is 1.75cm (69″), so the hand itself is nearly 50% taller than the average person!

The wrist is the entire width of the original stump, and the hand is carved in the top. Simon did need to add onto the stump too, to create the thumb and little finger stretching beyond the width of the wrist. 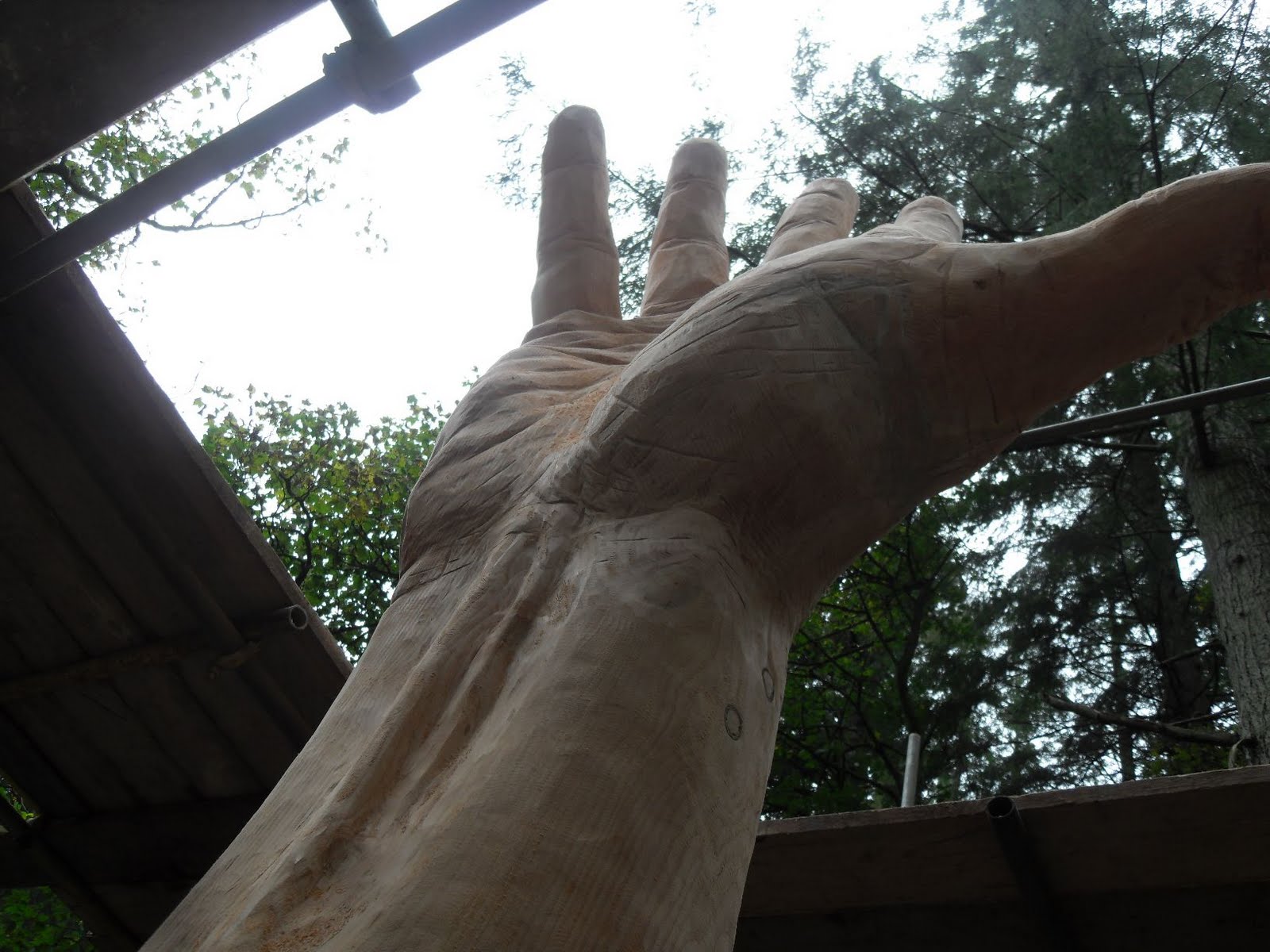 Viewing the hand from below helps give a sense of the scale, as well as showing the details like popping veins

Winning this commission was an amazing opportunity for Simon. Not just as an artist, but also as someone who wanted to share an environmental message. That message seems even more poignant now in 2020 when we are even more aware of climate change. Simon believes that the environmental factor is partly why the hand has had more attention lately.
His hope is that the juxtaposition of a hand coming from the tree stump will cause people to think about our connection and relationship with the earth. That being witness to the tree’s battle for growth will cause us to think. That we will be conscious of the footprint we leave behind. And that we will remember our duty of care for the planet.

Listen to more from Simon himself here:

Revisiting the Giant Hand of Vyrnwy: Your Thoughts!

Over the years since he made the hand, Simon has heard many comments from people who were moved by the sculpture. Thank you to those who have taken time to write or comment. We appreciate all the feedback.
Simon is always interested to hear about the impact of his work. And so, we want to invite you to share your story!
If you have seen the hand in person, or via social media, would you take a few moments to let us know what you think? Not just a like or a share, great as they are!
What did it say to you? How did it make you feel? What message did you take from it?
Let us know by emailing Simon on [email protected], or through his Facebook, Instagram or Twitter.

And for now, enjoy a few more of these little-shared photos of the Giant Hand of Vyrnwy… 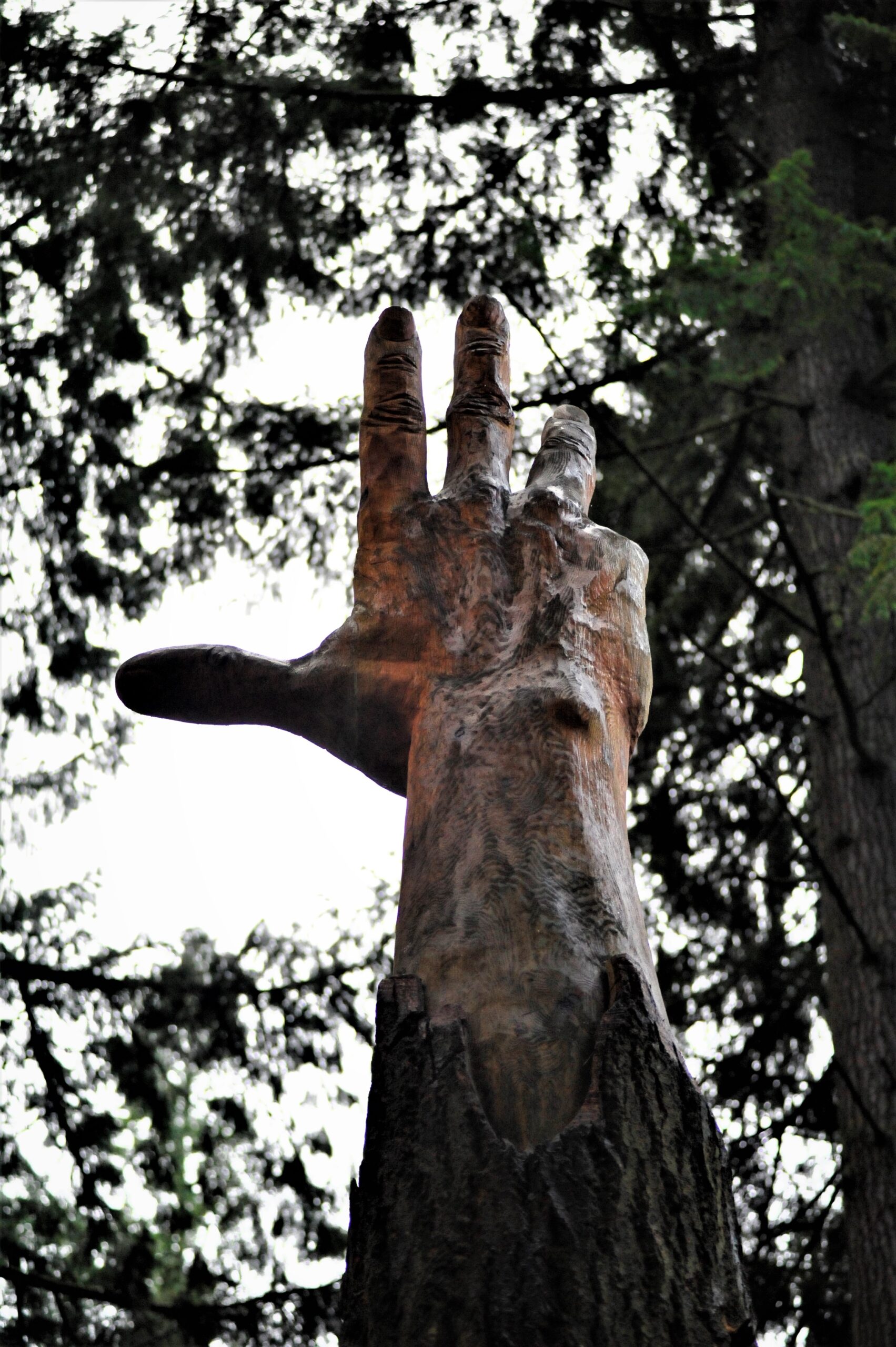 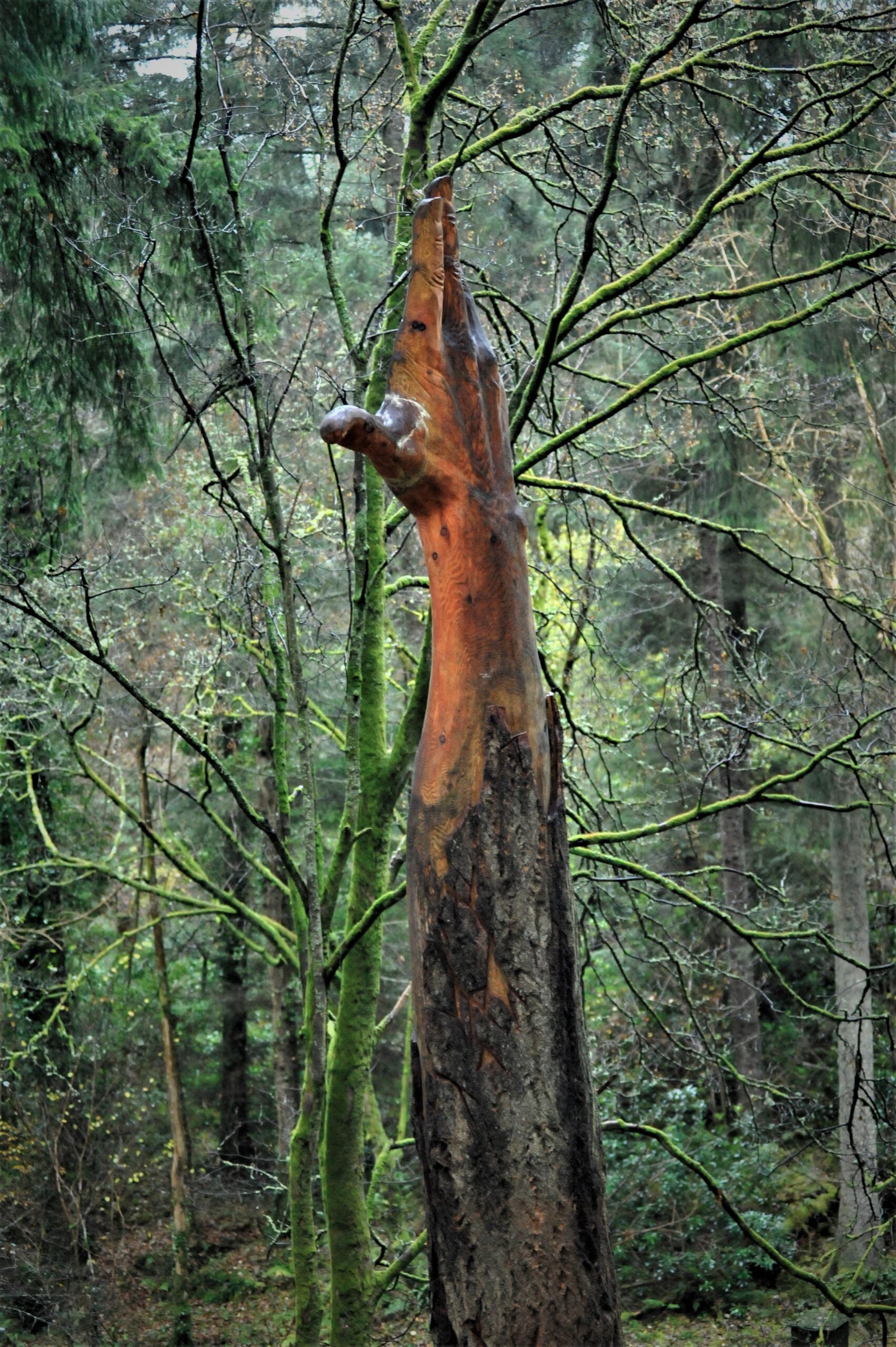 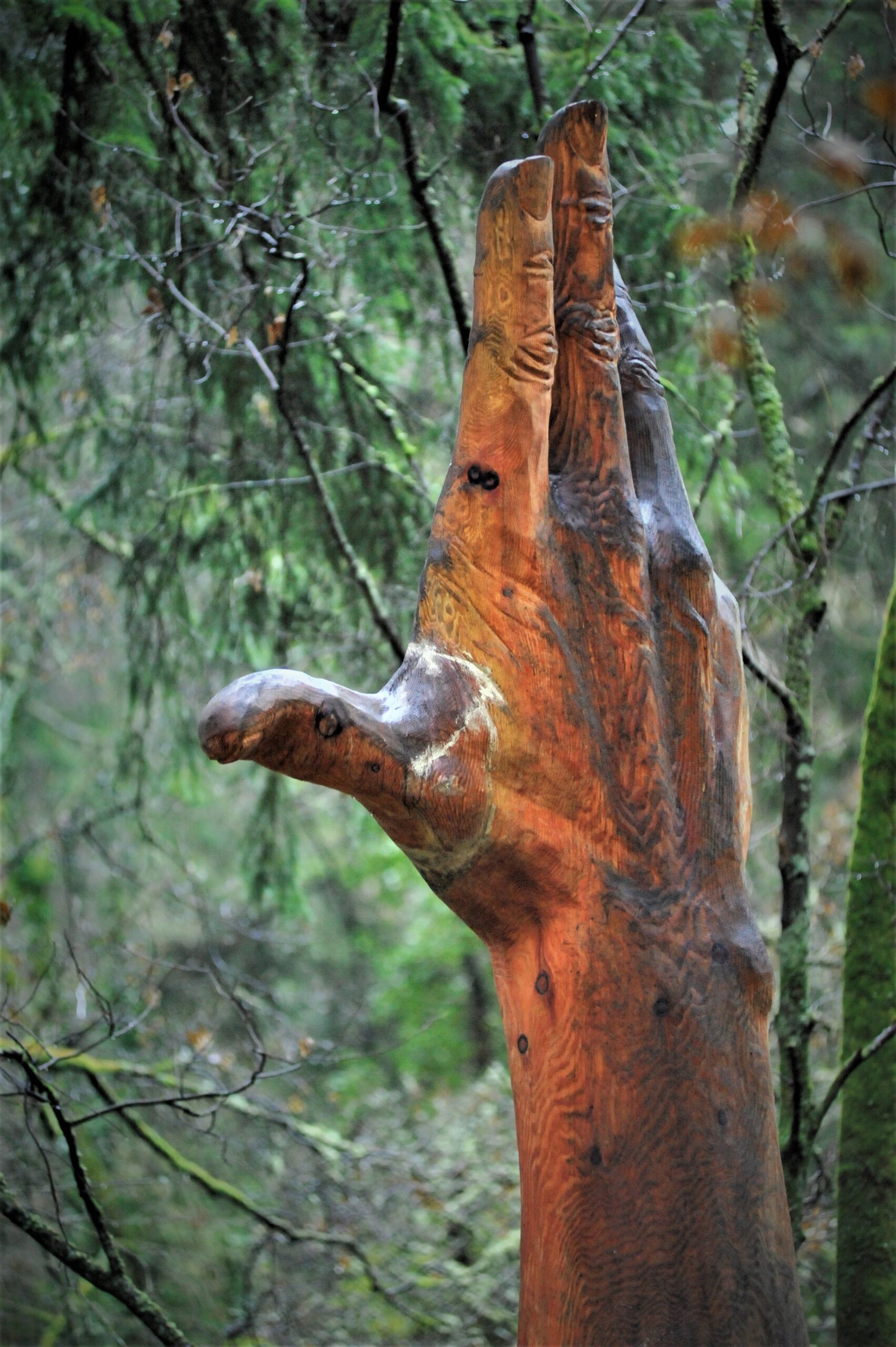 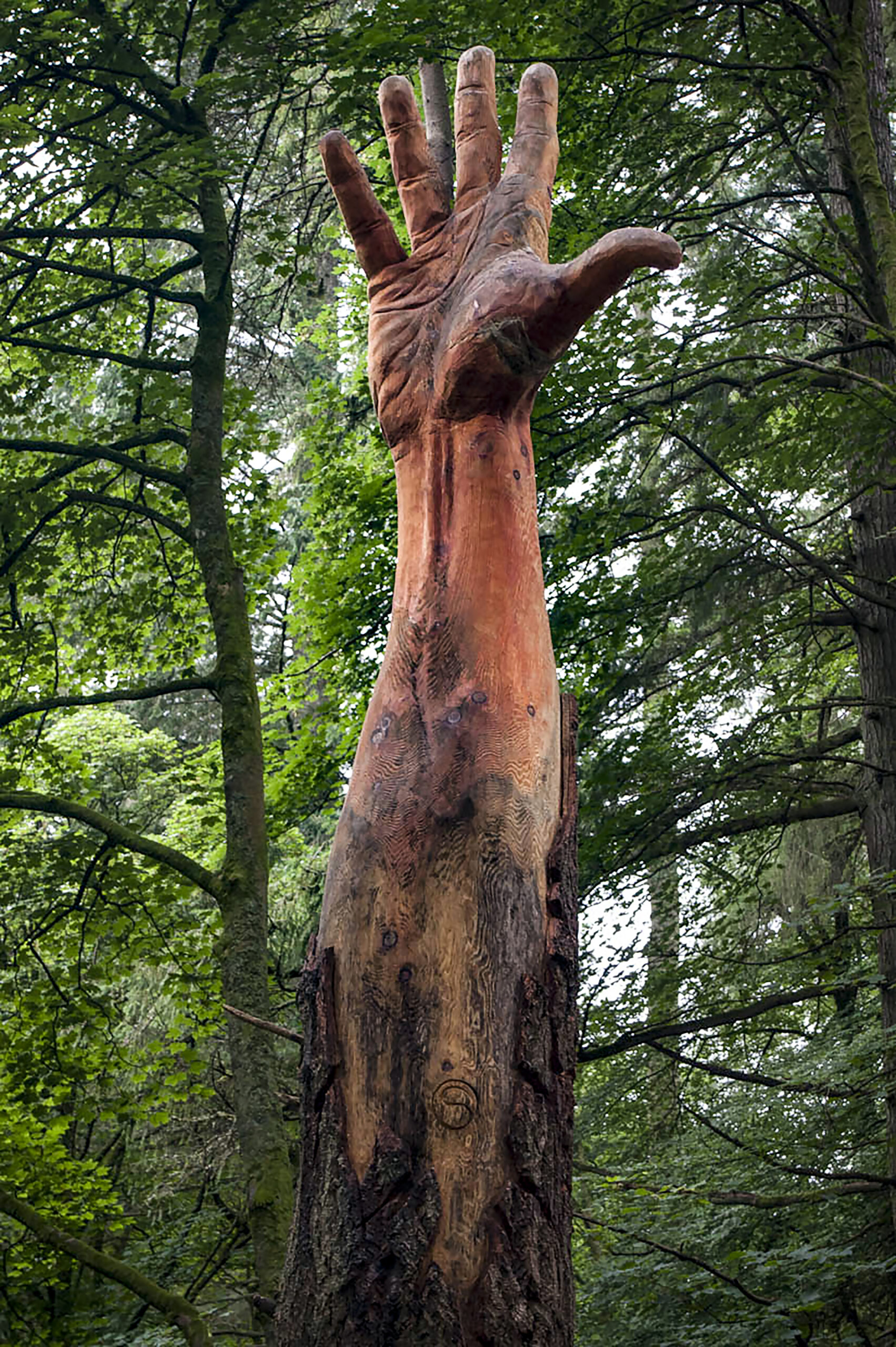 FAQs: How Long Will My Wood Sculpture Last?