Viewing Our Lady of Pen Llyn

One of the beautiful things about art, is that while the artist may have a vision or message, it speaks to people in different ways as they view. Our recent sculpture Our Lady of Pen Llyn is no different, so we wanted to share some thoughts others have had, and invite you to comment too. 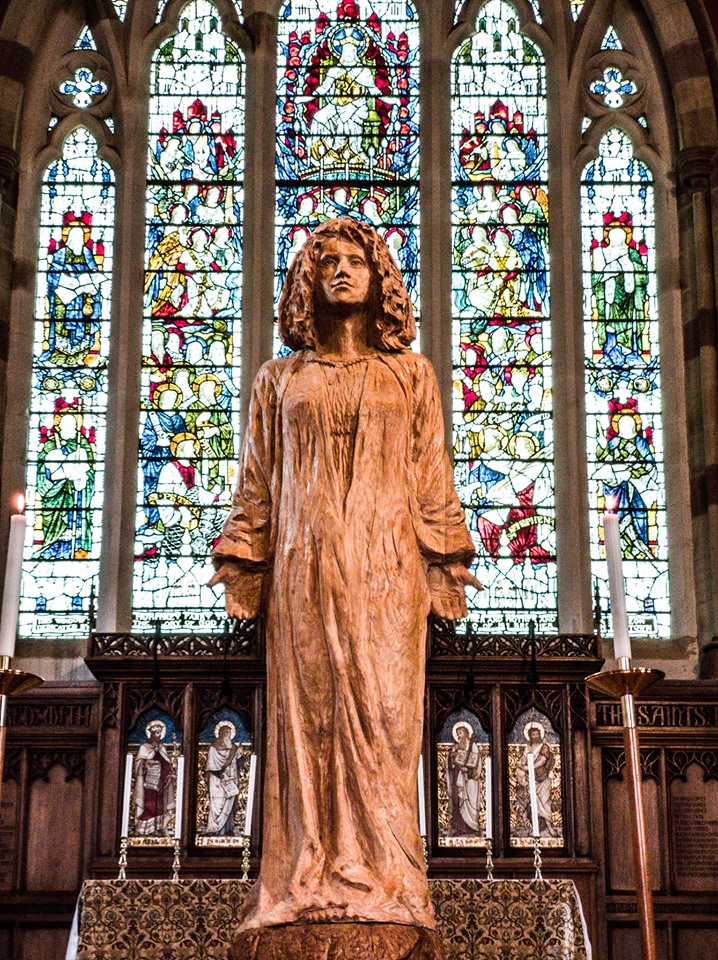 Reflecting On The Sculpture

One viewer has commented on the serenity of her expression, and a kind of wisdom and depth in her eyes.
Father Huw Bryant (the man behind the redevelopment project that led to the commission) has shared some of his thoughts in the statue description found at the church:

“One of the main features of the statue is Mary’s open handed pose. The Open Hand Image represents a hand open to give, as well as open to receive. Mary gave herself fully to the will of God, and she received the Holy Spirit. She gave the world her Son on the cross and she received the consolation of Joy in the resurrection. She lived with those hands open, open in trust, open in faith. Something we can emulate, to live with open hands, to not only give, but to receive as well. Out of living with open hands comes fresh new growth.  Living with open hands is an expression of an open mind, open heart, and open will.  Not only does living with open hands bring forth beauty but it is also the source of the passion of compassion. The flames of love are not stifled but are fanned into all-consuming, all-embracing, all-inclusive, unconditional love.” 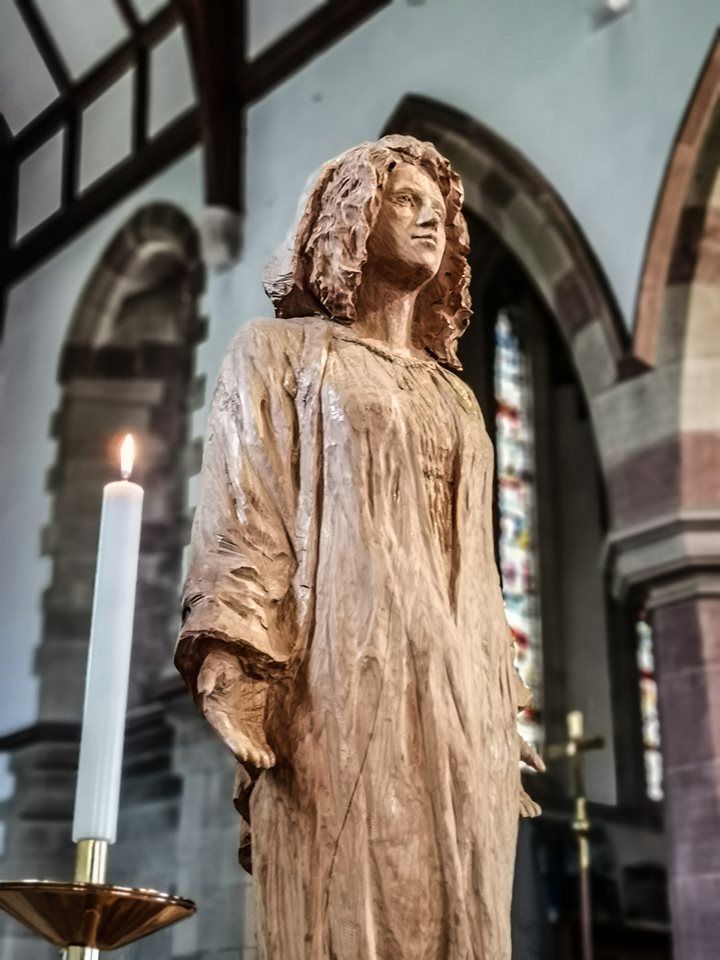 A Fountain of Grace

Another feature worth contemplating is the plinth which is carved from Welsh Oak. It is designed to represent a fountain on which Mary sits. This is a representation of the Holy Well on Uwchmynydd and links to the vision of her, unique to that place. The fountain is that fountain of grace which Mary unlocks for us through her Yes to God as she bares our Christ into the world. A fountain, like that well on Uwchmynydd which is open for us today, for all to drink from it’s pure waters and thirst no more.” 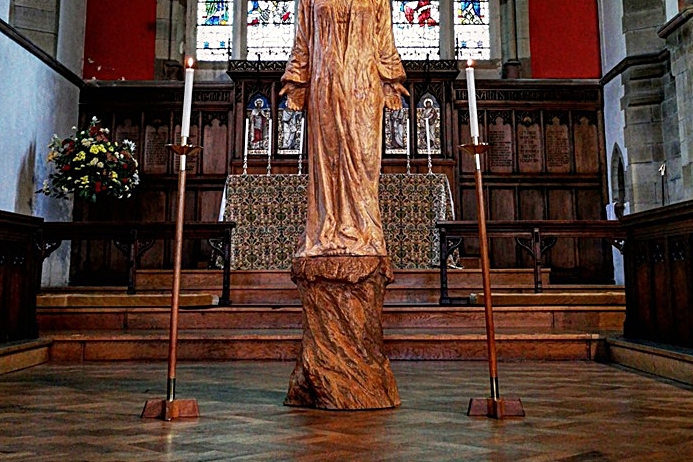 Close up of the plinth mentioned by Father Huw

Of course, photos often don’t do justice to a piece of art. For those who would like a better visual, but can’t see the statue during her tour, our friends at Public-Art UK have created this fantastic 3D image for you to see.

Our Lady of Pen Llyn by Simon O’Rourke
by public-art.uk
on Sketchfab

We’d love to hear your thoughts about our sculpture, and what aspects speak most to you. Why not leave us a comment below?

We’re sure you can’t have missed that this week was the anniversary of 9/11. Certainly my social media feeds were full of people paying tribute to all the servicemen and law enforcement (human and canine!) who had willingly sacrificed their wellbeing, and even lives, to try and save others.
Whilst it is always sad to remember, it is also a beautiful thing to pay respect and honour, and here at Simon O’Rourke Tree Carving, we were honoured to pay tribute ourselves last weekend to another group of servicemen: The Heroes at Highclere.

For readers outside the UK who may not have had the same media exposure, September 1918 marked the beginning of the end of the First World War. This would culminate in the Armistice two months later. In this centenary year, as a country we are taking time to honour the men and women who have selflessly served our nation. This fantastic event was one of many  that will happen over this year, and we are glad to have paid a part.

The Earl and Countess of Carnarvon of Highclere Castle (many of you will recognise it as ‘Downton Abbey’), chose to open their grounds for “Heroes at Highclere”: a charity weekend, honouring  those who have served and fundraising for charities related to our armed forces.  The reason we were there was because part of the weekend was the unveiling of a sculpture Simon created….

It was an incredible experience to be there in person at Highclere during the event. As well as getting to unveil the sculpture, we were also able to take time to enjoy the exhibitions, planes, food, good weather and wonderful atmosphere. We also met and talked with the families of the brave soldiers who lost their lives when their planes came down on and around the Highclere estate during World War 2. It is always a privilege to receive a commission with this level of meaning. Even more so this time because it is housed in such a beautiful, prominent, and iconic setting as the Highclere Estate!!

As well as the airman sculpture, Daniel, our carpenter and workshop manager, did a beautiful job of creating 3 benches based on the tail plane of a P38 aircraft; one of the types of aircraft that crash landed on the Highclere estate during World War two.

This actually ended up being the perfect combination. Partly because meant it included more of the planes that had crashed on the estate. In turn, this meant more of the families felt represented in the tribute. On the day of the unveiling we actually met the family of the pilot of the B17 who had sadly died in the crash. They were visibly moved seeing their family’s history displayed in this way. It was humbling to meet them and we felt honoured that they loved the benches.

As well as the joy of seeing the completed pieces in their new home, and the fun of being able to take part in the heroes weekend, participating in this way also leaves us humbled and thankful for the men, women and animals in our armed forces and law enforcement. We hope that others who visit the castle and see our Airman and benches, will not only enjoy the artistry, but also take a moment to pause and reflect on their significance…

You can see the airman on the lawns overlooking ‘Heaven’s Gate’ at Highclere Castle for the foreseeable future. (Admission charges apply, please see the Highclere website for details)