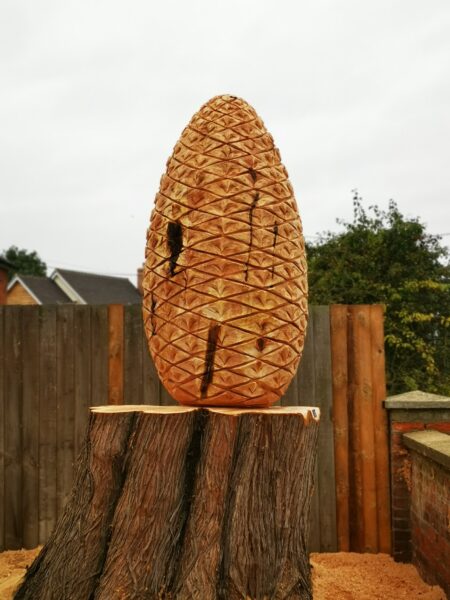 Last week Simon created something very different to his usual style: a giant pinecone sculpture! Did you see it on Facebook or Instagram? It definitely caught his followers’ attention, with comments including:
“Amazing”, “unbelievably awesome”, “wonderful” and “in awe”.  Read on to find out the story behind the sculpture…

Simon’s client had a Monterey Cypress tree with a tree protection order on it. However, it was shedding branches close to the road. It was a danger to traffic in the area and needed to be cut back. Simon’s client took the necessary steps and received permission to cut the tree back for safety reasons. Please note, if you have a tree with a protection order that has become dangerous, it’s important you take the right steps to get that order amended or revoked.

The client used tree surgeon Harry, from Dedham Vale Tree Surgery, a tree surgeon who sometimes works with Simon. When Harry heard that the client would like to turn the remaining stump into a feature, he recommended Simon. The client made contact and commissioned the giant pinecone sculpture. 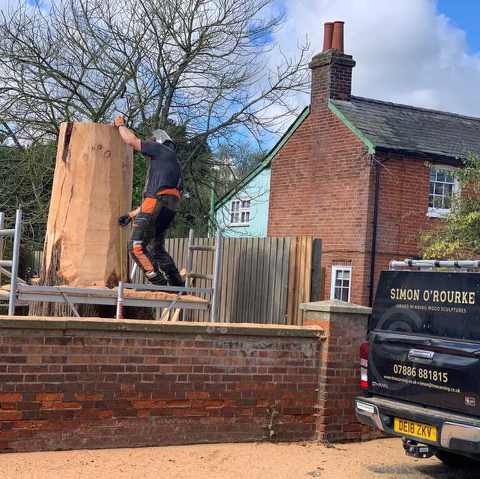 Simon at work on the giant pinecone sculpture

Choosing a Subject for Sculpture

Sometimes the choice for a sculpture subject is deeply personal. Sometimes it’s symbolic. Other times it’s historic. Or represents a passion, hobby or quirk. This time, however, the choice of a pinecone was really very simple. The client wanted the sculpture to stand out as a feature, and continue the legacy of the rather impressive Monterey Cypress when it had been at its peak. The stump is surrounded by other pines and firs, so the client had the idea of a giant pinecone sculpture! 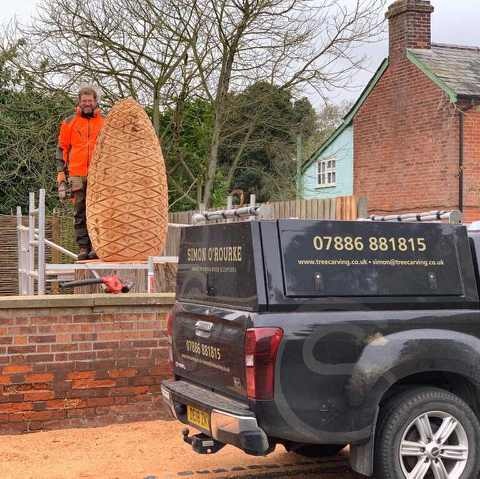 Simon with the sculpture in progress

Simon found it helped with the shaping to draw a circle on the top and mark the sides with horizontal lines at specific measurements.

Once the cone shape was done, he then divided up each row around the shape into sections and drew the diagonal lines in. It was only then that he could start cutting the pattern!
He used the cordless MSA200 saws to create the general pattern, then used Manpa cutters to create most of the 3D spines on the cone.
Finally, it was onto Saburrtooth burr discs on the angle grinder to round off all the edges and get it looking tidy. 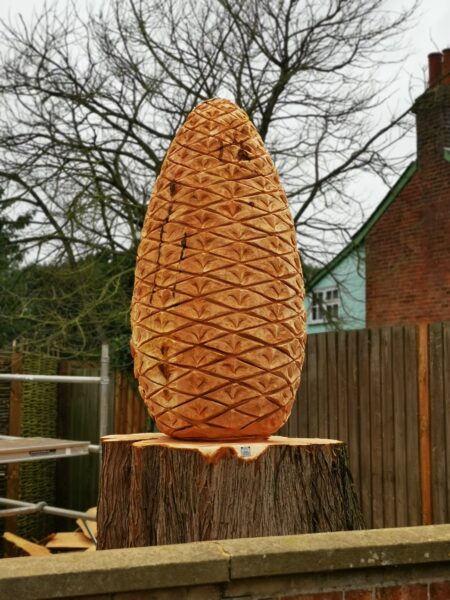 The final piece is bold and striking and definitely meets the requirement of being a key feature piece. The client wanted something that would be a fitting replacement for the beautiful tree that had stood there before, and the pinecone sculpture is certainly that.  It stands around 6′ tall and (if you’re a cypress lover!) will also smell amazing for a while yet! Simon’s client is extremely happy with the finished piece, describing it as ” a piece of art”.
Do you have a diseased or dangerous tree that you would like to turn into a sculpture?
Contact Simon using the form at www.treecarving.co.uk/contact.
Recent Posts
Login to Simon O'Rourke
Reset Password
Enter the username or e-mail you used in your profile. A password reset link will be sent to you by email.