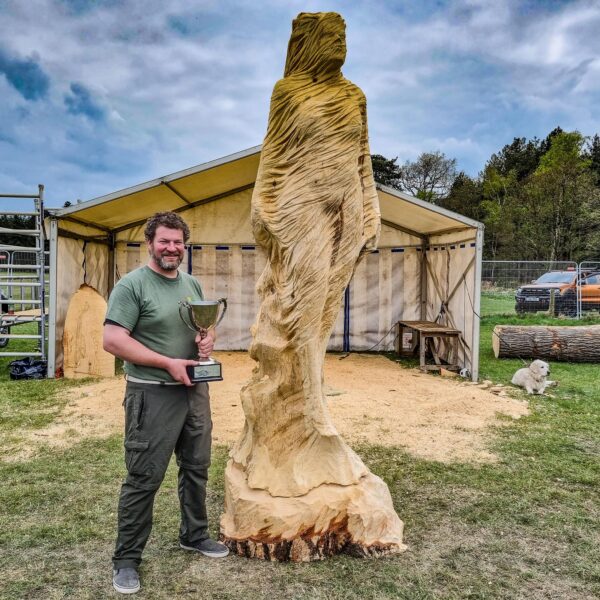 The May bank holiday weekend marked a return to competitive carving for Simon after a four-year break. And he didn’t just compete! His sculpture ‘Ascension’ was spectacular and he earned the title of 2022 Sandringham Cup winner. 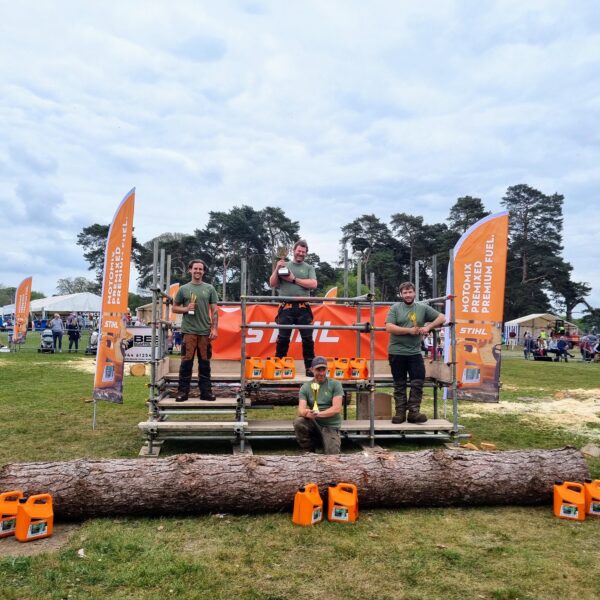 Before talking about the sculpture that made Simon the 2022 Sandringham Cup winner, what is the Sandringham cup?!

The competition is part of The Sandringham Food, Craft & Wood Festival. This year 15 chainsaw carvers from around the UK took part, and each had three days to produce a carving of a design of their choosing. Logs were chosen via a draw, and competitors had the weekend to create their sculptures.

Judging then took place on the final day, with the top placing sculptures going up for auction.

The competition is organised by Mark Earp of Hebsta Chainsaw Art, who did a fantastic job once again in getting it all up and running and keeping the carvers organised! 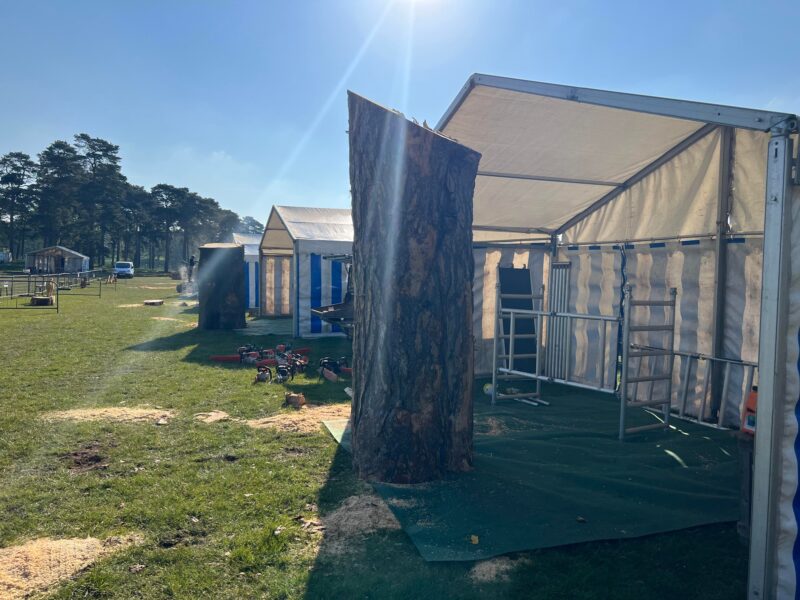 The timber chosen by Simon for his 2022 Sandringham Cup sculpture.

Choosing a Subject for the 2022 Sandringham Cup

Simon chose a piece of Corsican Pine for his sculpture in the draw. That was the timber sorted, but how did he choose his subject?

One of the things he likes about the Sandringham Cup is that carvers are free to create anything they want. Large scale human form sculptures are one of Simon’s favourite things to carve, so that was a natural starting point.

Prior to the event, he’d been experimenting with ‘wind blow’ sculptures, but on a much smaller scale. He wanted to create something similar on a larger scale to challenge himself – and carving drapery and creating a figure under cloth is definitely a big challenge!

And for those curious about the scale, ‘Ascension’ is about 9′ tall! 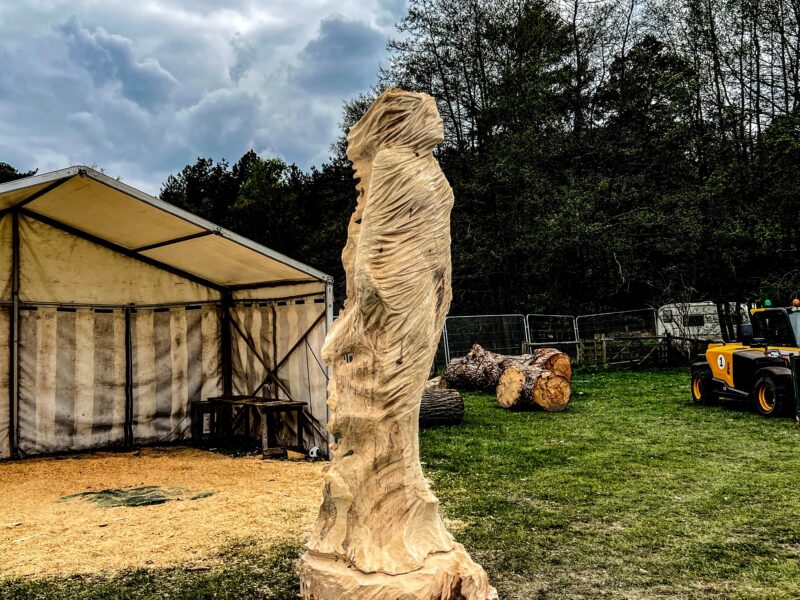 After just over two day’s carving, Simon finished his piece ‘Ascension’. The ethereal, veiled figure captivated people as soon as she was revealed on social media. And it’s unsurprising given she’s not only beautiful but intriguing…

There is no figure inside the cloth, just the impression. This is a reflection of how temporal we are as humans.

The figure is ascending, but the veil has a slightly restrictive feel. This indicates the things we clothe ourselves in; the masks we wear, and the impression we give others. That other people only see an impression of who we are, with the person inside remaining hidden, known only by themself. 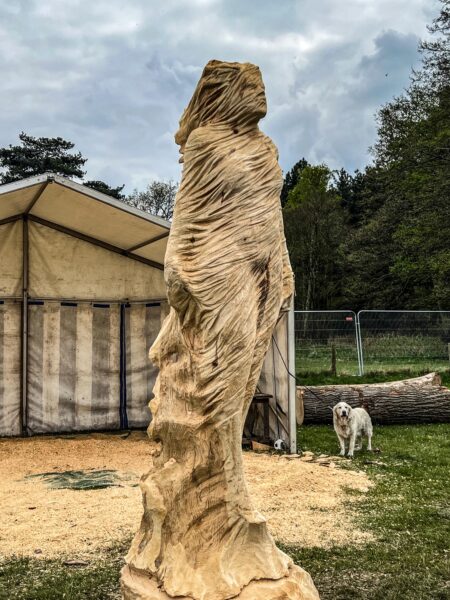 Tips for Other Carvers

Of course, followers of Simon’s work will recognise this style of ‘shrouding’ and mystery from another large scale work, The Marbury Lady. He’s known to excel at creating drapery and movement through his sculptures too, as seen in other works like The Angel at the Pool of Bethesda, The Narnia Treehouse Fairy, The Oak Maiden, and these English Open Chainsaw Competition entries from 2019.

So with this being something of a trademark, what tips can other carvers pick up for creating their own sculptures?

“Making wood look like flowing cloth is always a challenge, you have to really feel what the cloth would be doing when the force of a wind pushes it against a form. The other major challenge is creating the detail of the face as if it’s behind a veil. Think about the form underneath, and carve the shape with an extra layer on it, then start working into it revealing the shape underneath.“

Final thoughts on the 2022 Sandringham Cup

Obviously being the 2022 Sandringham Cup winner was a bit of a highlight of the weekend.

For Simon though, chainsaw carving events are about more than the competition. It was an opportunity to challenge himself, and to create something he wanted to create rather than a specific commission. The chainsaw carving community is a fun one, so Simon also enjoys being able to connect with friends and make new ones within the community. And, as this event was the one that Simon describes as ‘kickstarting his career’, there’s a touch of nostalgia too.

If you’re a chainsaw carver unsure about competing or joining events, there are massive benefits to the community and experience, so definitely go for it and enter! 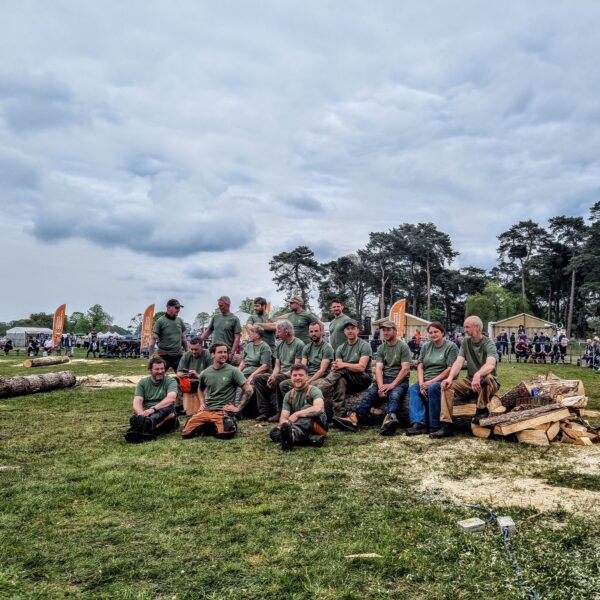 Where is ‘Ascension’ Now?

Although there was an auction for the top pieces (shout out to other winners Mike Jones, Jake Swanson and Matt Crabb), Simon’s reserve wasn’t met. This meant he got to take Ascension home with him, and enjoy her for himself.

At the moment The Leader reports that he’s happy to have Ascension for now and it’s nice to have her ‘home’. However, if you are interested in owning Ascension, Simon is potentially open to selling her. You can email him on [email protected] if you’re interested.

Lastly, thanks to Stihl and Titan Chainsaw Carving for their support of Simon in the 2022 Sandringham Cup.

And if you would like to own your own chainsaw carving sculpture by Simon, please contact him via www.treecarving.co.uk/contact.