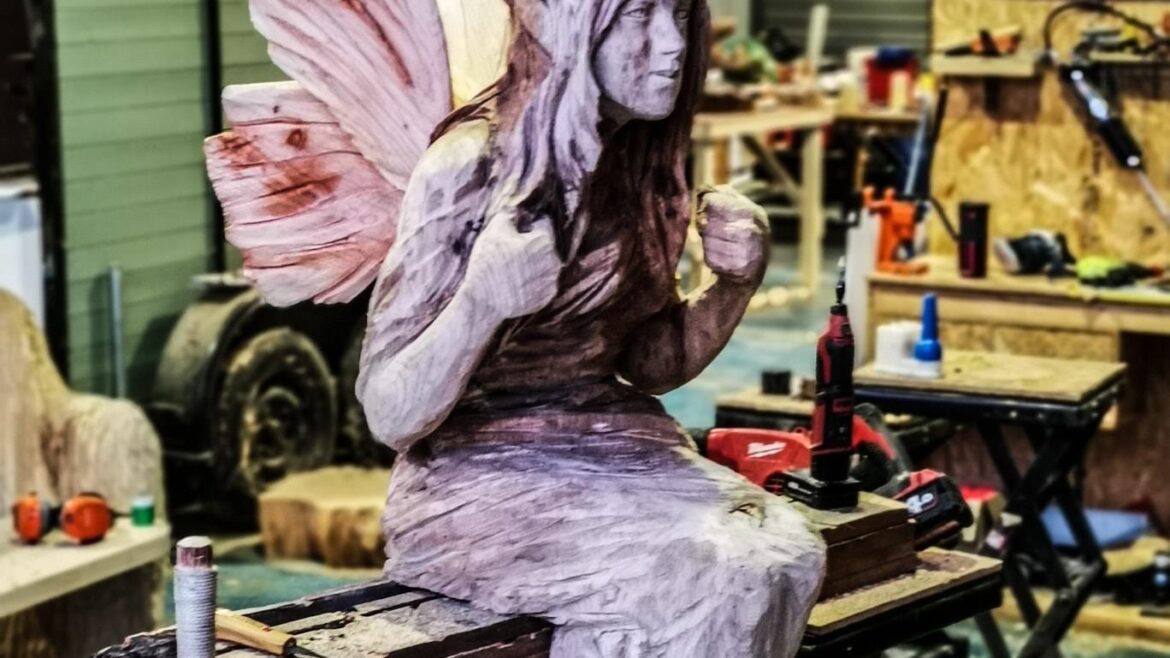 Happy New Year! We hope that despite the turbulence, it has still started well for you.
After last week’s reflection on Simon’s sculptures from 2020, we thought this week we would look forward to this year. Simon already has some exciting 2021 sculpture commissions lined up.

One of Simon’s upcoming 2021 sculpture commissions is a leopard. After a year of lions it’s nice to have a continuation of the theme, but with a bit of a change. The challenge with this one is that it will be lying down, and fixed into a real tree. Part art, part engineering!

In the category of ‘animals’, Simon also has an upcoming commission for a horse bench which we look forward to seeing. 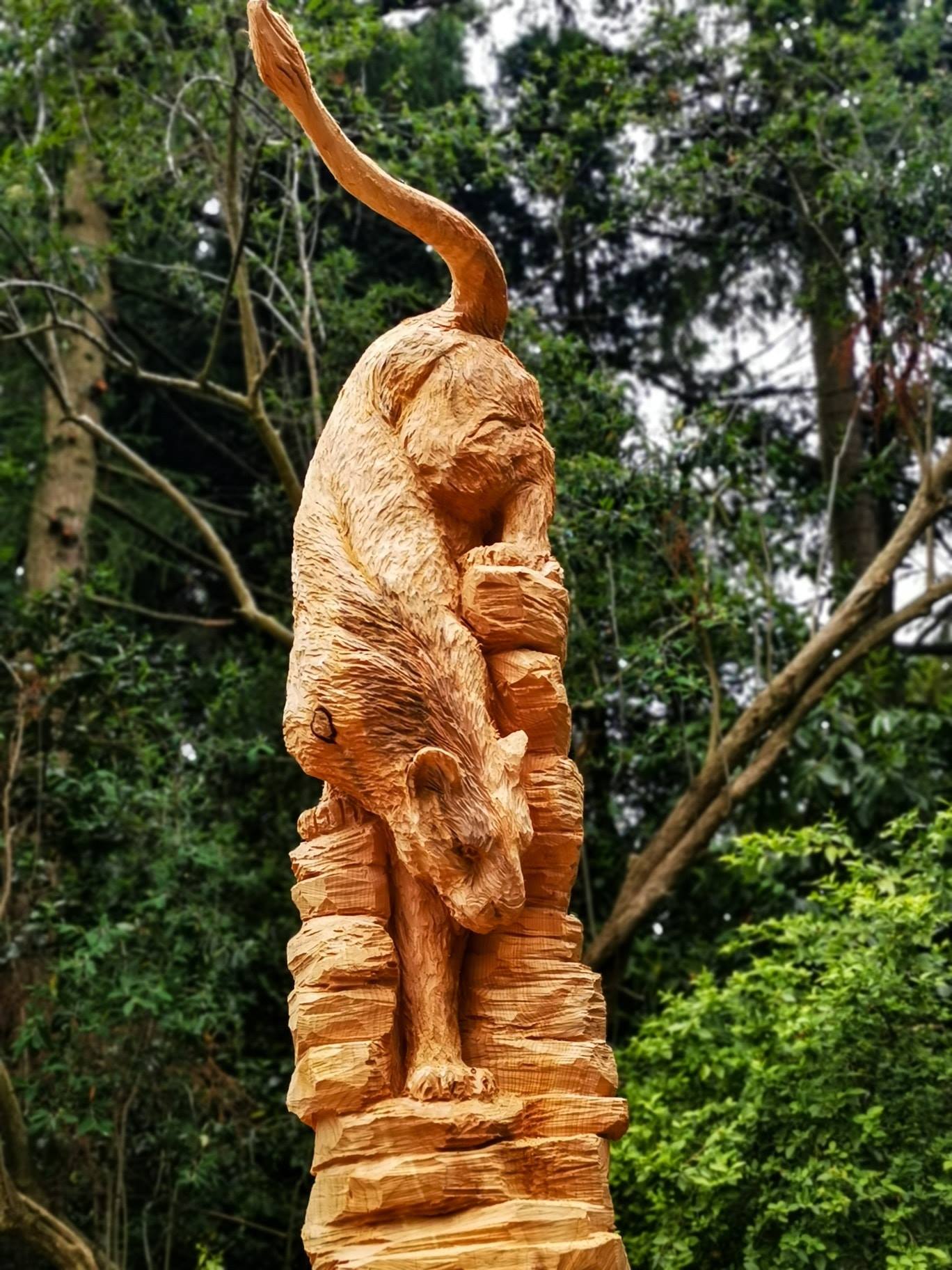 In 2021 Simon will also be adding to his works already at Poulton Hall, Wirral. During 2020 he created the fabulous Monkey Puzzle Ent and Gollum sculptures. This year he will undertake a commission of Shakespeare sitting on a bench, which fits in with the literary theme that flows throughout the grounds. 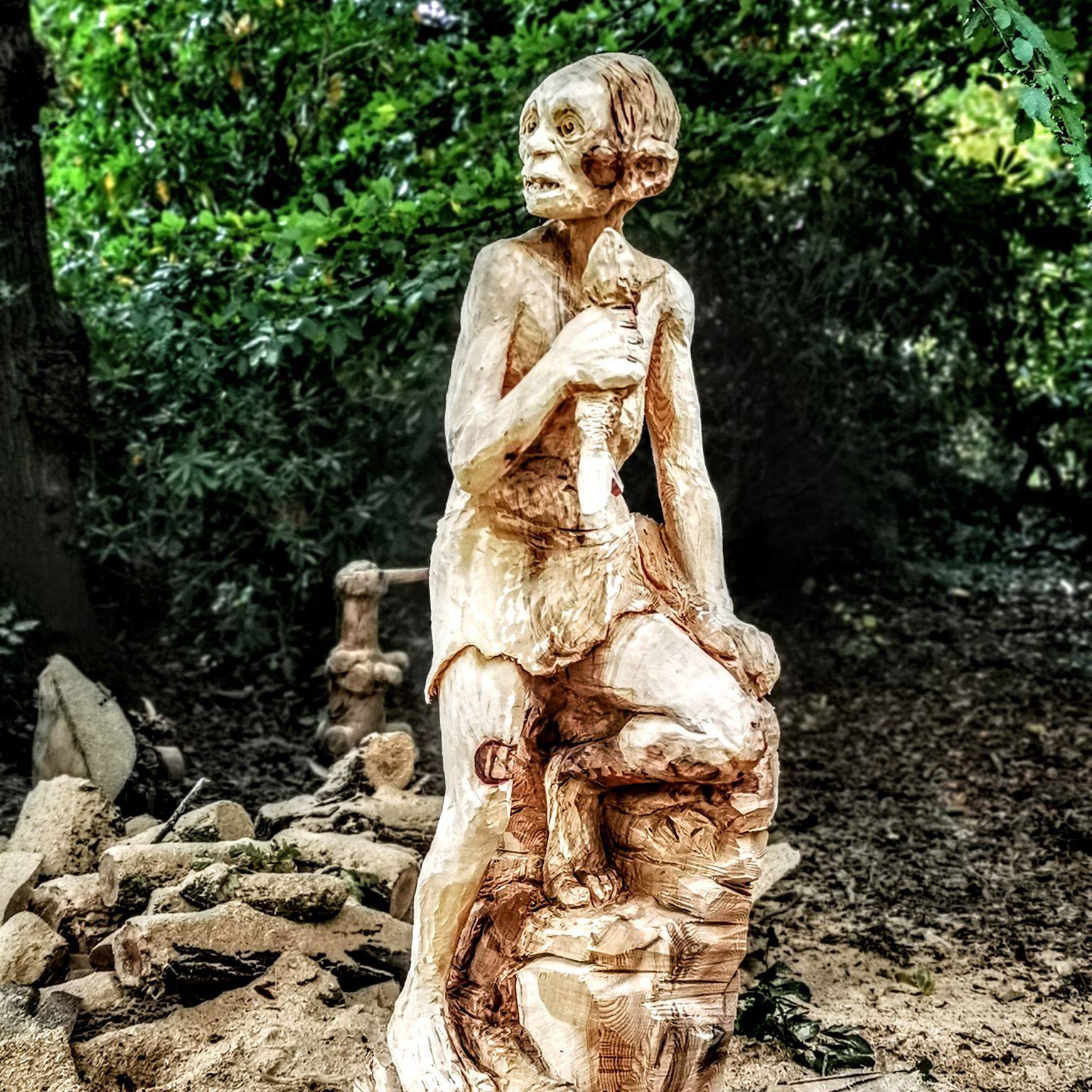 With Netflix releasing their Narnia series this year, we can expect to see a lot of references to C S Lewis and the mystical world he created. In a complete coincidence, Simon actually already has a commission for a Narnia sculpture! He’ll be making Lucy with the lampost for Cedar Hollow, Oxford. The owner already has other Narnia sculptures – very fitting as it is next door to where C S Lewis once lived! The guest house is also going to have a Lord of the Rings area. Simon has actually already created an elf on a swing which will be installed there. If you follow us on social media, you might have spotted it already.

You can also expect to see another Ent in the near future too. After seeing the Ent at Poulton Hall and the incredible Oak Treefolk (Father and daughter at a property in Surrey) we can’t wait to see this next Ent! 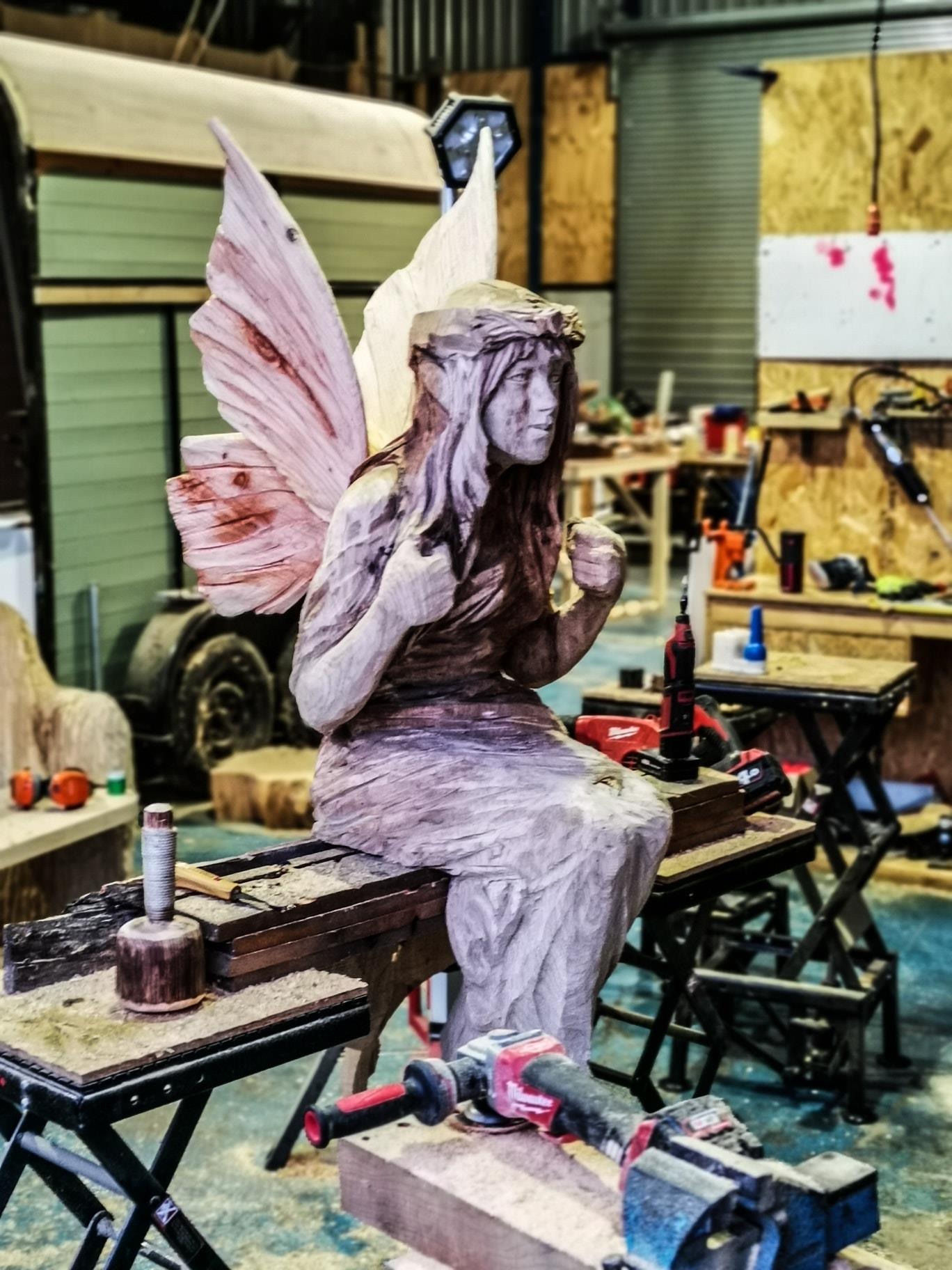 The Cedar Hollow Elf in progress in Simon’s workshop

Your Own 2021 Sculpture Commission

Simon is super excited about all of these projects, and we can’t wait to share them with you as they are completed.
The good news is, he is still taking commissions for 2021. So, if you are interested in commissioning something whether it be a pet portrait or full sculpture trail, get in touch! The best way is via the form at www.treecarving.co.uk/contact/.
Until then, we’d love to know, what else would you like to see Simon create this year?
Drop us your answer in the comments! 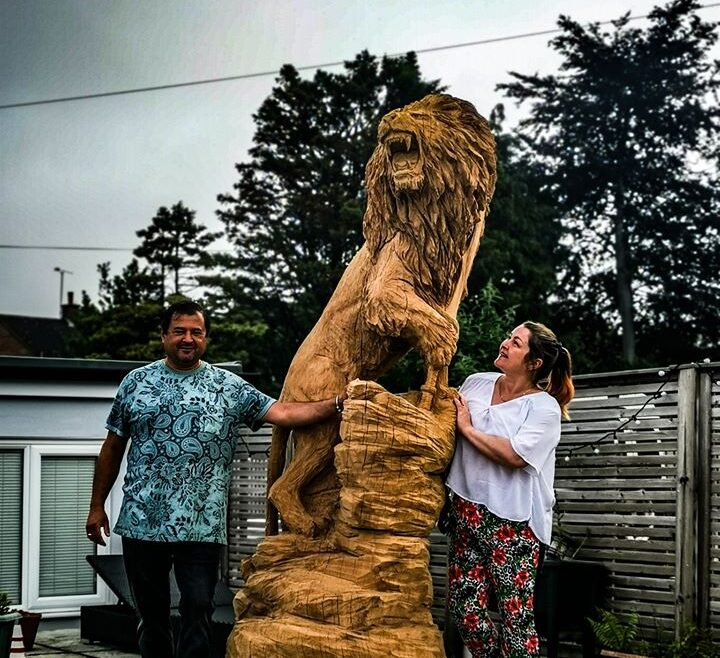 Back in February Simon began posting photos of a Lion sculpture Ihewas working on. Last week he was able to deliver and install the finished piece. Keep reading to find out more about the Sri Lankan Lion sculpture! 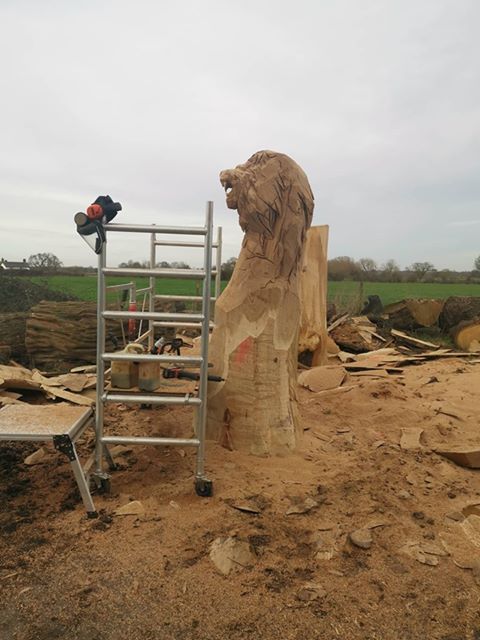 Simon was first contacted by this client at the end of 2019. She was looking for a unique and significant gift for her husband’s retirement after 32 years working in the NHS. They had seen and admired the Dragon of Bethesda and initially reached out to ask about something similar.
Initially they talked about a lion-dragon combination. This would certainly have given lots of room for Si’s imagination! 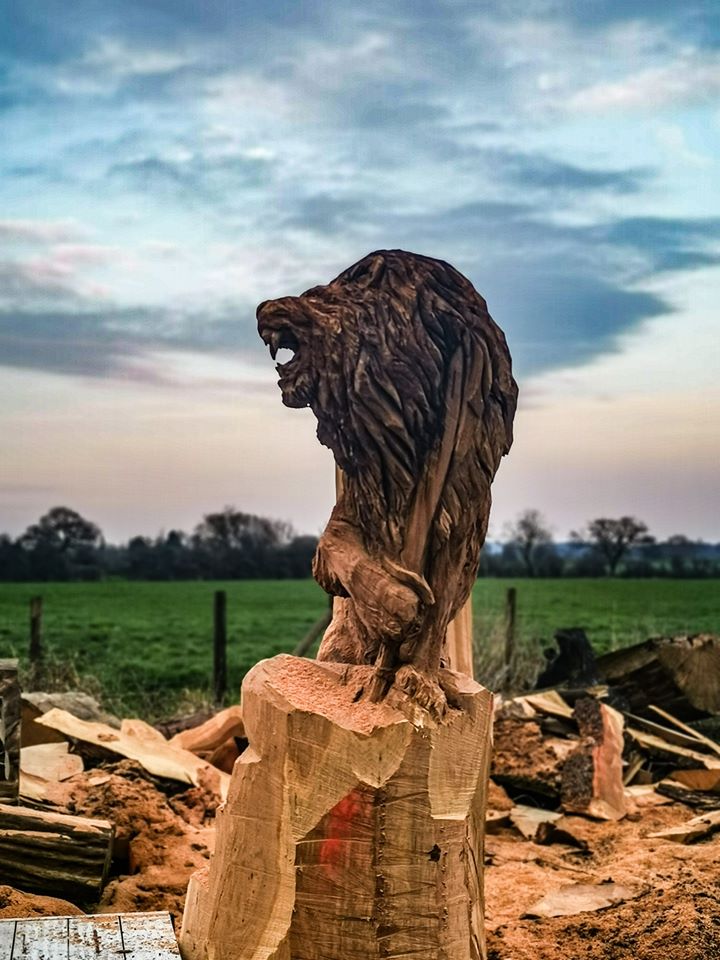 Evolution of an Idea

Deciding a final design is often a conversation though, and progression of ideas. This commission was no different. Early on, the client assessed their garden to see if they had any trees suitable to be carved as they stood. This is a great starting point, and it saves the step of sourcing timber. The shape, size, and unique characteristics of that tree are then the starting point for a design. In this case, there were no trees suitable though. The client realised too that they would rather have a free-standing sculpture so it could move with them if they ever moved.
We sourced a large piece of oak from JRB Tree & Timber Services, and work began! 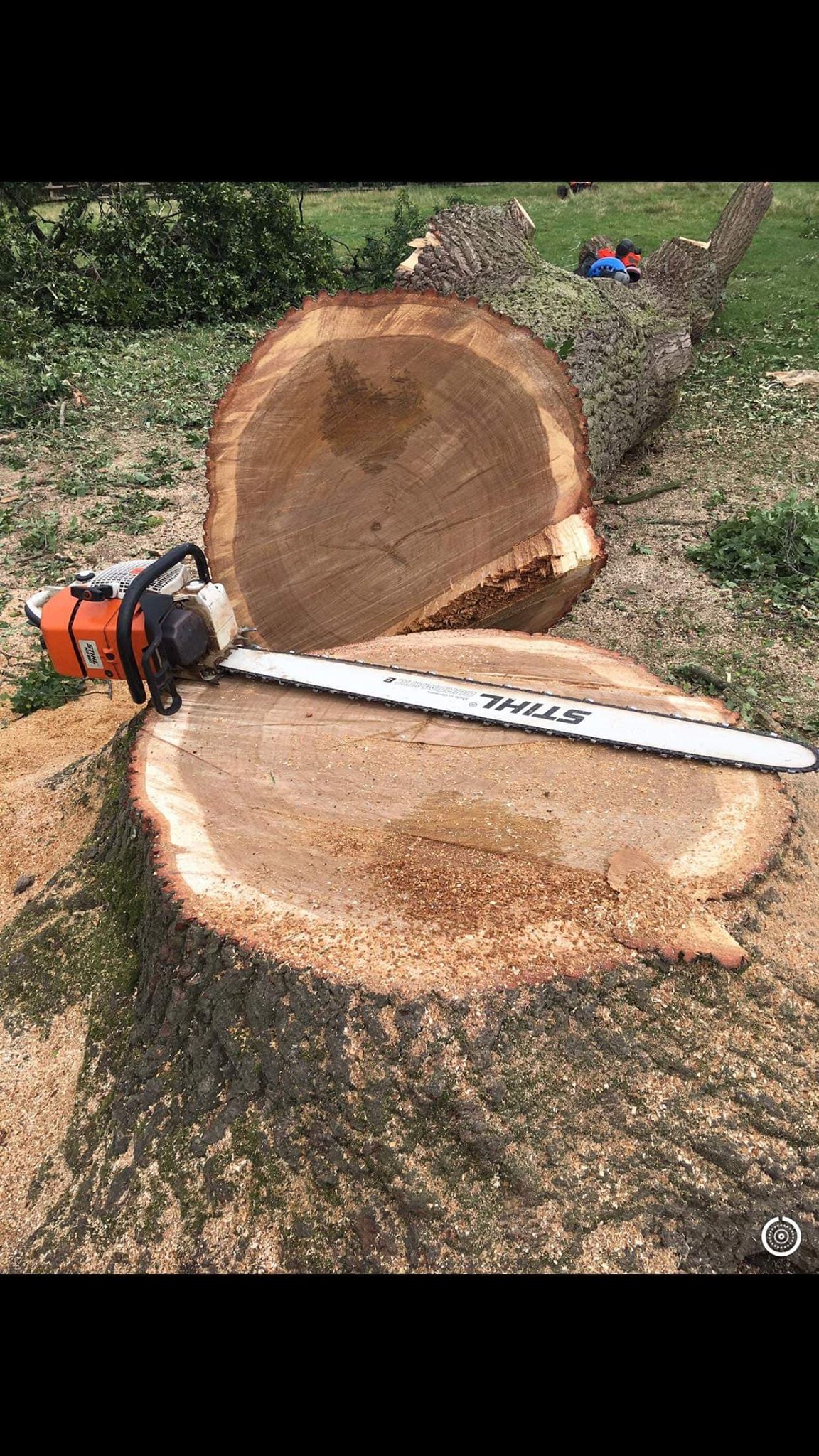 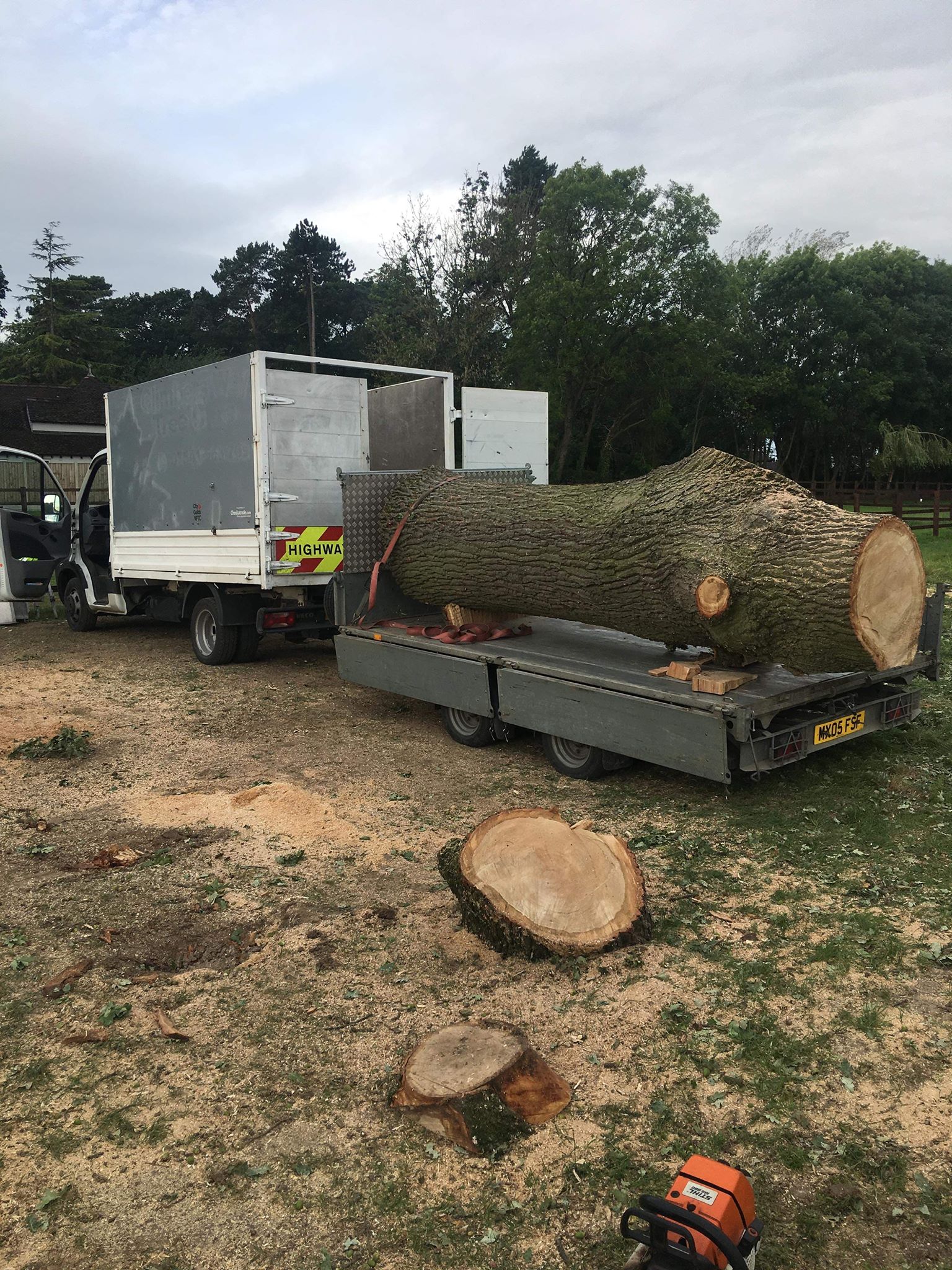 Ready to be brought to the workshop!

The client had come back to Simon at this point and settled on the idea of a Sri Lankan lion sculpture. Her husband is half-Irish, half-Sri Lankan and is proud of his heritage. The flag of Sri Lanka features a lion, and he even has a tattoo of this lion on his shoulder! This gave Simon a great starting point.

The lion on the Sri Lankan flag has been around since around 500bc and was seen carrying a sword from around 160bc.  The lion represents strength and bravery, and the ethnicity of the Sinhlaese people, so Simon’s lion sculpture needed to reflect that same strength. No cute and cuddly Disney Simbas for this sculpture! That pose, the clear muscle and the pose are striking and awesome, in the true sense of the word. A definite depiction of the bravery and strength the lion represents. And carrying a sword makes it clear this is the lion of the Sri Lankan flag.
By the way, if you enjoy learning about the history and symbolism of flags, you can find out more about the symbolism in the Sri Lankan flag on this blog. 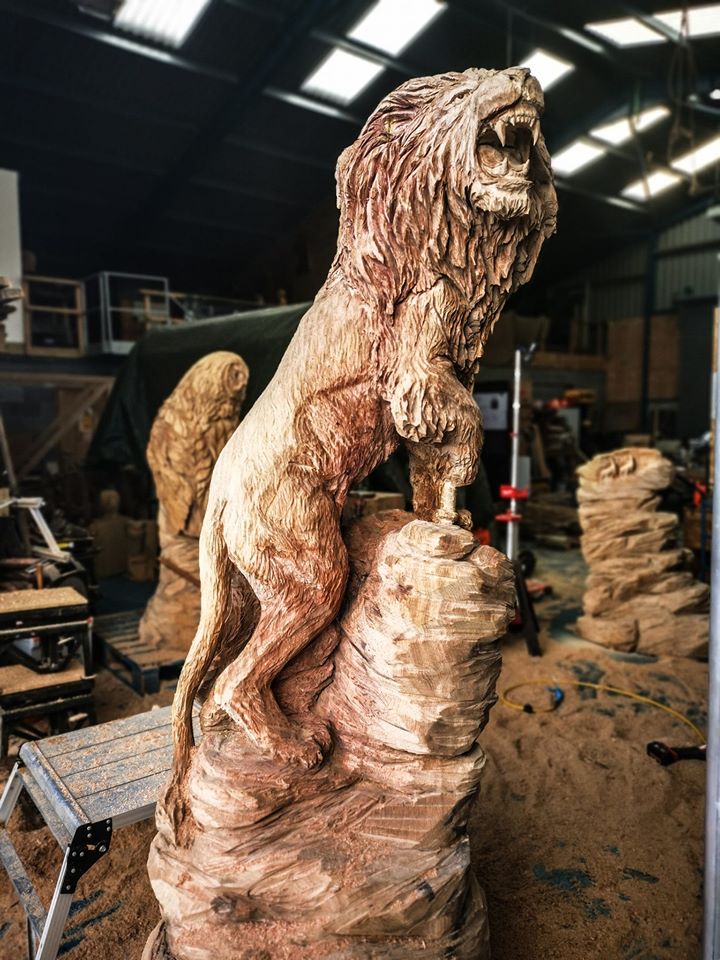 The finished lion in the workshop

As you can see from the previous photos which show the lion in progress, Simon began with a rough outline of the lion. The first areas he started cutting detail into were the mane and face. This is important, as they were to be the focal point of the sculpture. Starting with them makes it easier to ensure the rest matches them,  rather than making the focal point fit something that is less important in terms of focus. By carving them first, Simon really can make sure that everything else about the sculpture compliments and directs the viewer’s gaze towards the ‘main feature’.

Gradually he was able to add more details, with attention being given to even the tiniest aspect of this Sri Lankan Lion sculpture. Check out his lion dentistry with the Saburrtooth coarse flame bit…

A bit of careful dentistry!

In fact, Simon used the full arsenal of power tools on this commission! Here he is using the Manpa Tools Multicutter tool with the triangle head to create the lion’s fur. For those wondering where to get their own, Manpa Tools are not easily available in the UK, but Simon sources them through www.chainsawbars.co.uk. We thoroughly recommend Chainsawbars as a company too, as you can find out in our blog  Collaboration with Chainsawbars.co.uk.

Seven months on from the first conversation, and Singha the Sri Lankan Lion sculpture (named after the Sinhalese people and meaning ‘Lion’) is in his new home. He looks magnificent in place. Most importantly though, the couple love him, describing him as ‘absolutely wonderful’ and ‘fabulous’.
32 years of service to the NHS is no small thing. This Sri Lankan lion sculpture is a wonderful gift to recognise that service and honour their heritage. 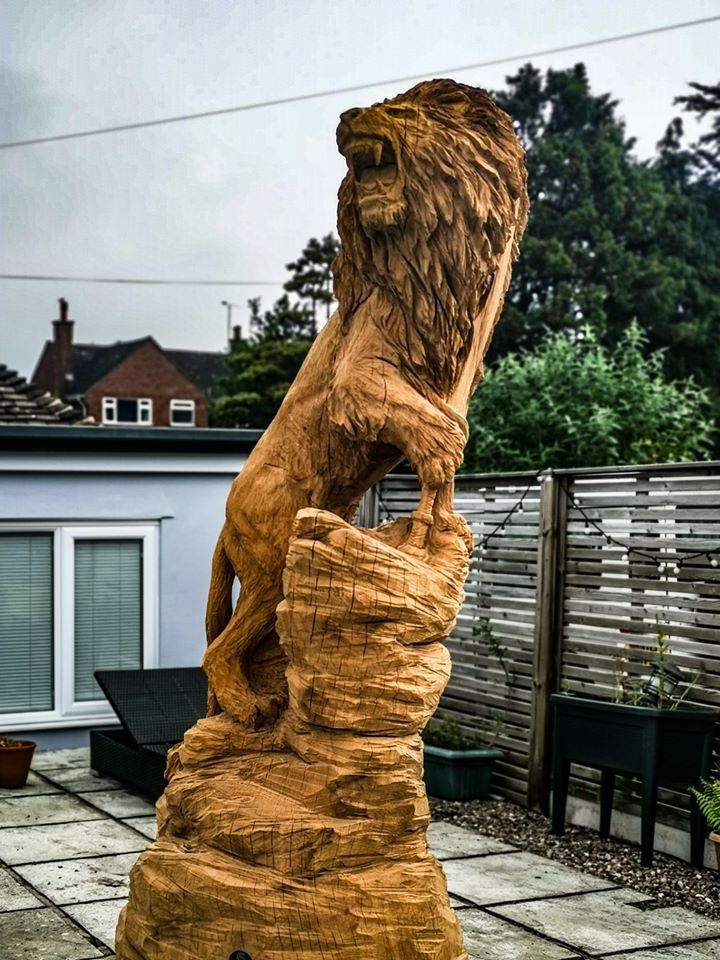 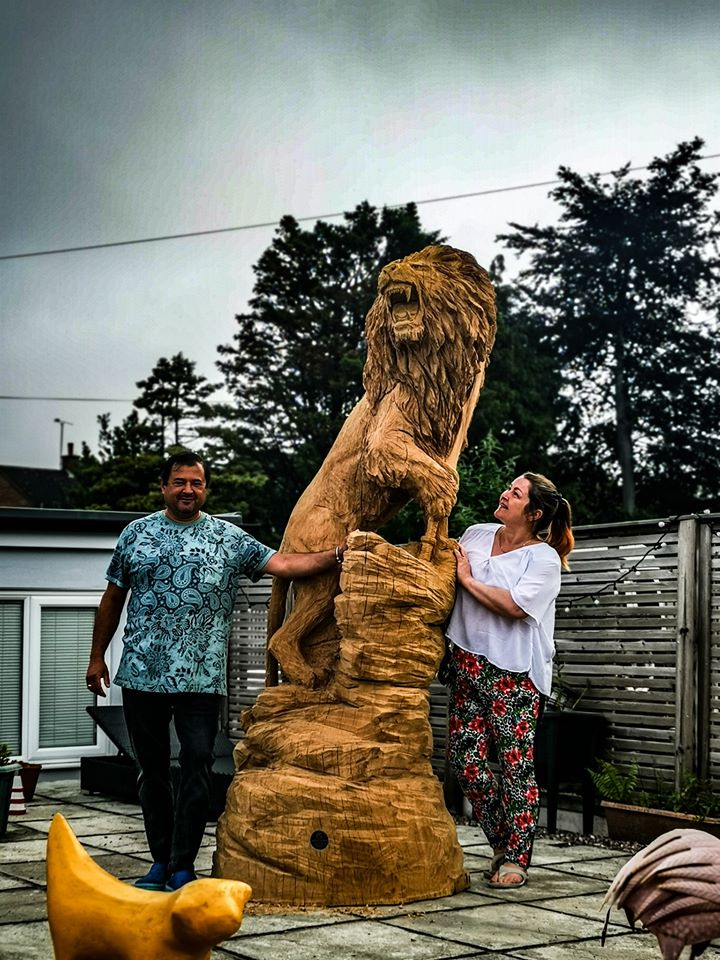 The client and her husband with Singha the lion

If you are looking for your own unique, significant, and personal gift, we would love to hear from you. Contact us via the form on www.treecarving.co.uk/contact/ and Simon will get back to you to chat about design and costs.