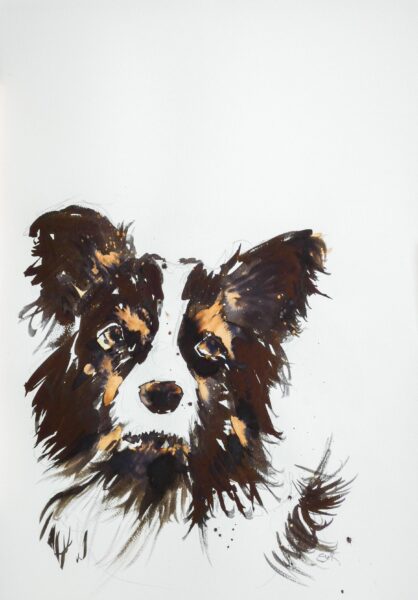 Illustrators that Influence his Work 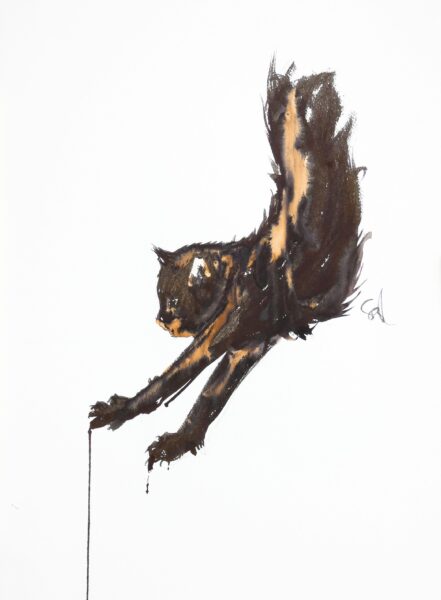 An ink and bleach painting by Simon, reflecting the ‘blotchy’ style of Ralph Steadman

Victor Ambrus was a Hungarian-born artist known for illustrating history, folk tales, and animal storybooks. In Simon’s words: “I love the inky tones and the textures he was able to achieve. In particular, the book Blackbeard had me studying every picture for ages – there was so much detail!” 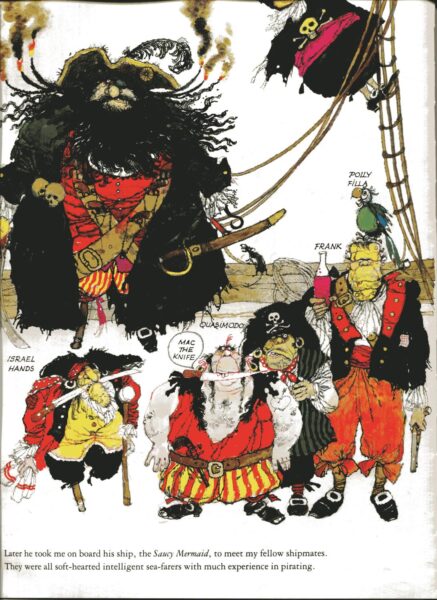 We’ve mentioned before that Albert Uderzo was an illustrator Simon loved. And not just the illustrations! As a child, Simon enjoyed reading Asterix books and escaping to the world of Uderzo’s famous viking. Later, as an artist, he explains that “[Uderzo’s] ability to create so much character from a few strokes was amazing, and I’ll always love the Astérix books.” Asterix and Obelisk from the Uderzo books that have influenced Simon.

Our third illustrator that has influenced Simon is Arthur Rackham. Simon says that “[he] will always be a firm favourite, timeless fantasy characters and beautiful silhouette work.”

Arthur Rackham is probably one of the lesser-known names in Simon’s list of illustrators that influence his work. He was an English book illustrator and is recognised as one of the leading figures during the Golden Age of British book illustration. He’s known for his robust pen and ink drawings, which he combined with the use of watercolour.

Rackham’s 51 colour pieces for the early American tale Rip Van Winkle were actually a turning point in the production of books since as it featured the accurate reproduction of colour artwork. His best-known works also include the illustrations for Peter Pan in Kensington Gardens, and Fairy Tales of the Brothers Grimm. 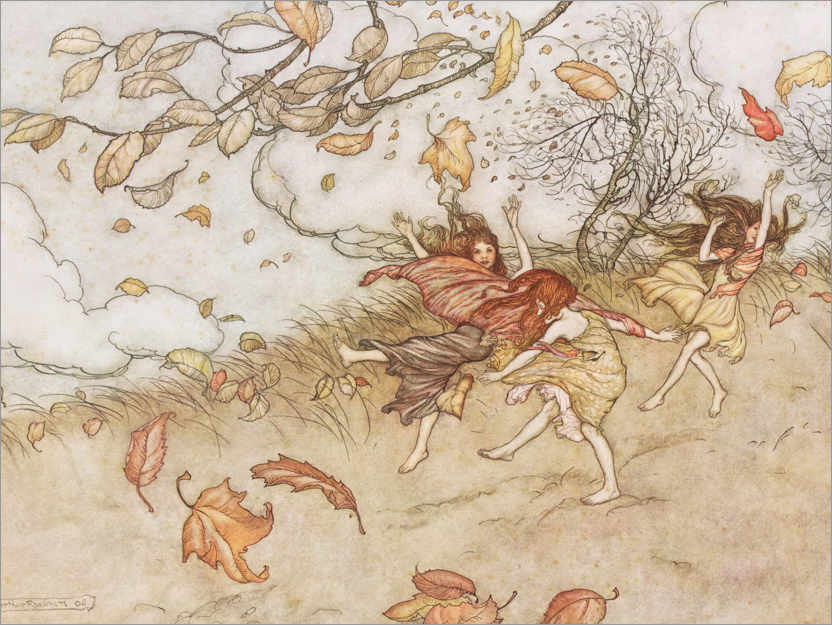 An example of Arthur Rackham’s work in Peter Pan

Another illustration we have mentioned before as being an influence on Simon, is Herge, the creator of Tin Tin. Simon always admired his clean lines,  although he could never emulate them! As Simon says, “I’ve always been more at home with a sketchy style.”!
This ‘sketchy style’ is carried over into his sculpting which he describes as being more impressionist in style and uses rustic rather than refined textures. 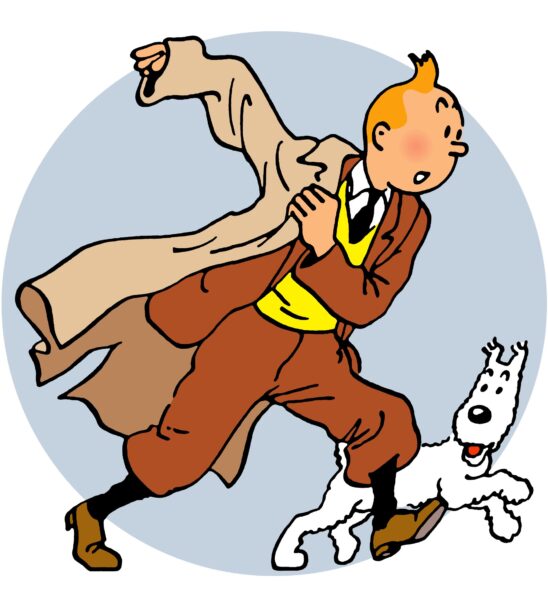 Tin Tin was another childhood favourite of Simon’s that he later came to appreciate as an artist too.

And speaking of having a ‘sketchy style’…
What-A-Mess (the dog created by Joseph Wright) has a place in the hearts of many who grew up reading about the loveable, accident-prone Afghan hound. And, as well as liking the character, his creator, Joseph Wright is an illustrator who has influenced Simon:
“The what-a-mess books always fascinated me with the extra characters in the drawings that had their own narrative going on independent of the story.”

Have you ever noticed the background characters in a graphic story? 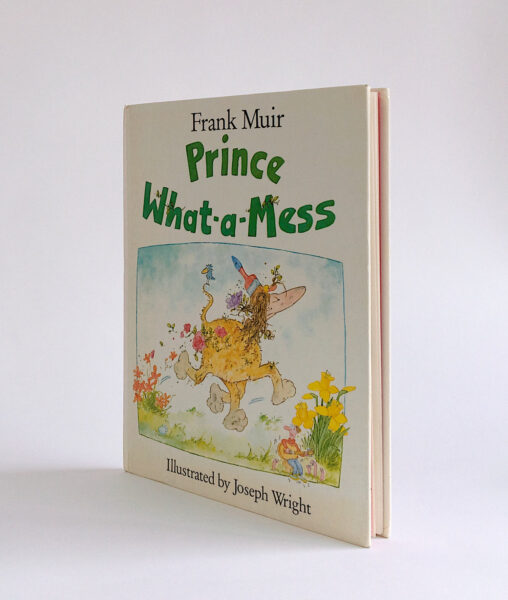 The background characters in What-A-Mess with their own narrative fascinate Simon.

The last of the illustrators in Simon’s list of illustrators that influence his work is a bit of a departure from the others: Ralph Steadman.
Steadman isn’t known for his work on children’s books. Rather, he is known for his political and social caricatures, cartoons and picture books, and his partnership with American writer, Hunter S Thompson.
In Simon’s words: “The blotchy splashes of Ralph Steadman are brilliant too. I do try to emulate that with my ink and bleach drawings.” 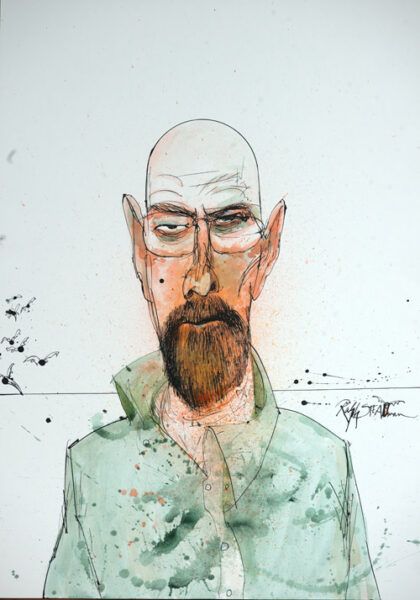 The timing of this blog about illustrators that have influenced Simon fits nicely with an upcoming project. In our blog about the Picton sculpture trail, we shared that the clients, Simon and his wife Liz shared a dream to publish a book about Fudge, the trail’s canine protagonist. And it’s happening!

Liz authored the sculpture trail story, and has written the book about the adventures of Matt and Rachel’s  Dachshund,  Fudge. Simon is the illustrator, using some of his original sketches for the Lower Farm sculpture trail as the basis for the book.

The book will be released later this year (fingers crossed!) and will help raise funds for Alder Hey Children’s Charity and Dementia UK.  Watch this space for details! 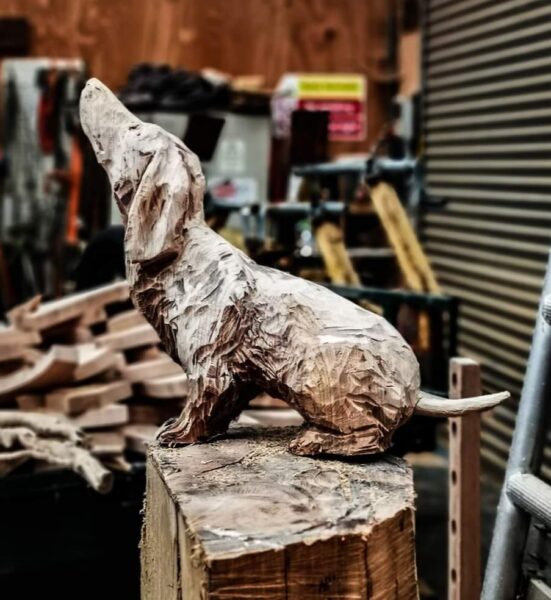 Fudge the Dachshund, the protagonist of the Lower Farm Sculpture Trail

Who are your Influences?

Who are the people who have influenced you in your field? Drop a comment and let us know!

And, (although it’s a very different topic to the blog!) if you would like to commission a sculpture, contact Simon using the form at www.treecarving.co.uk/contact/.