There’s something very poetic about this week’s featured sculpture, where a phoenix arises from a Douglas Fir.

Unlike many commissions where a tree is damaged or diseased and a customer wants to turn it into something beautiful, in this case there was nothing wrong with the tree. Rather, it had simply become too big for its location, and couldn’t stay where it was planted. This isn’t uncommon. Lots of people plant trees in gardens not realising how big they’ll get, and they become a potential hazards. There are plenty of ways to transform the story of that tree though if that happens, including commissioning a unique piece of art! 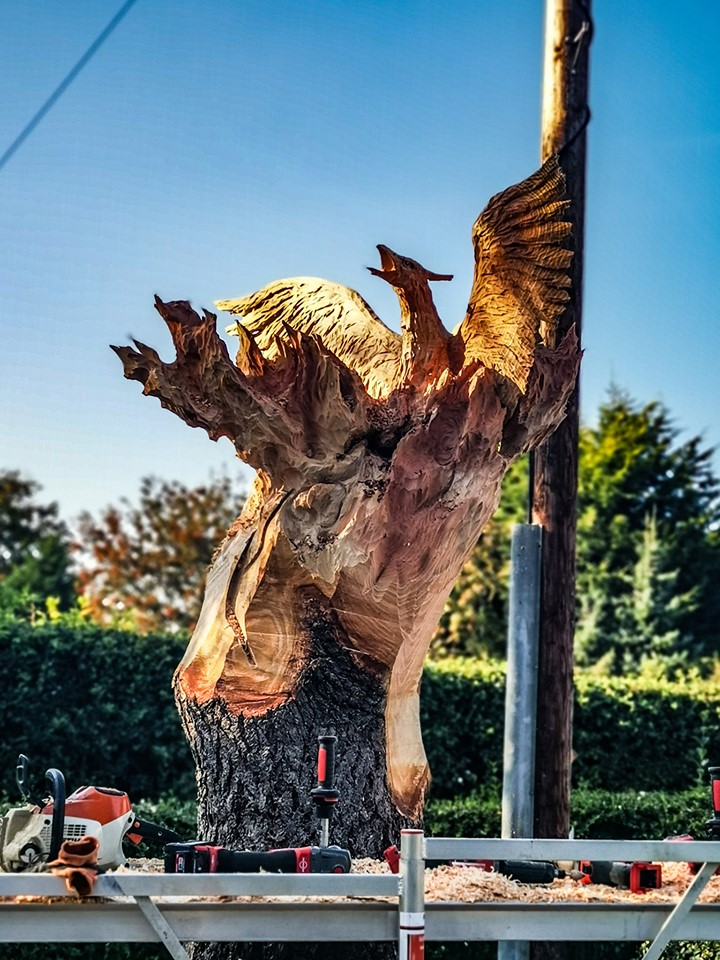 The Legend of the Phoenix

The phoenix is a bird which has come to represent new life. More specifically, it has also come to represent the birth of something beautiful out of the end of something else. Greek and Roman mythology says this long-lived bird dies in a show of flames. Then, out of the ashes from the fire, a phoenix arises in a majestic show. It then seems fitting that a tree that has seen the end of its natural life, would give birth to this stunning phoenix sculpture. The parallels don’t end there. Legend also says the phoenix dies and regenerates after 1000 years of life. Did you know that’s also the possible life span of the Douglas Fir?! As an evergreen tree, the Douglas Fir can also represent eternal life – as does the phoenix because of its legendary cycle death and regeneration. 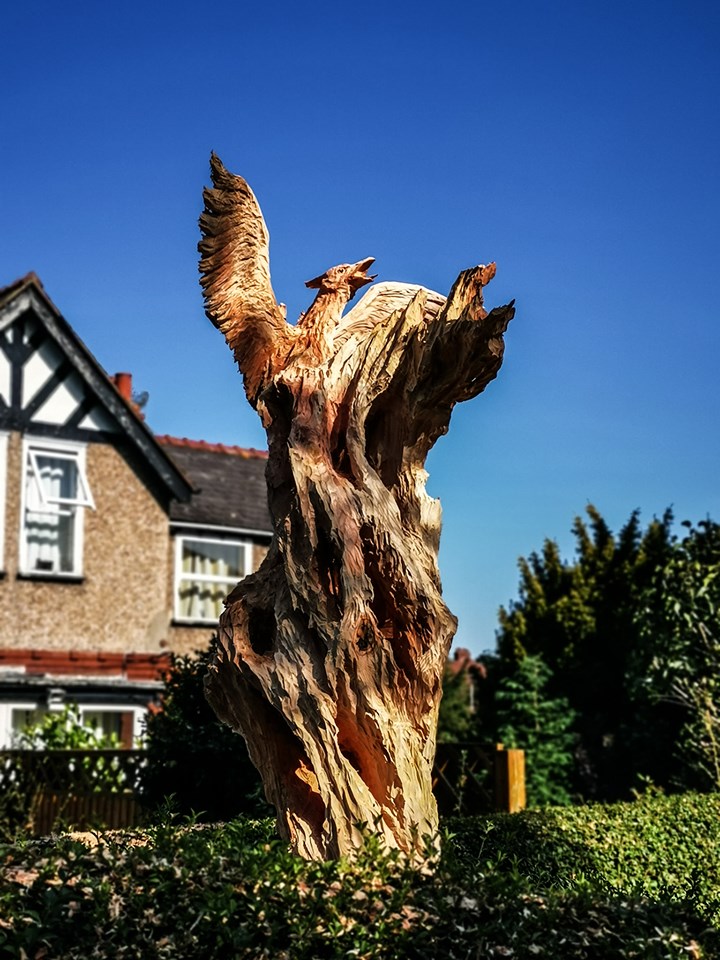 This particular fir  had an interesting shape that Simon needed to work with. Trees always come with their own sets of twists, knots and potential for future cracks, and Simon has to constantly adapt his design as he discovers those. The shapes and textures work so well in this sculpture though, you would never know it hadn’t been specifically and intentionally designed that way!

The twists and texture from the very base of the trunk to where the phoenix arises mimic the movement of the flames that legend says consumed the first bird. These get more intense, closer together and more detailed as they travel up the trunk, until they become actual flames. Their shape is also reminiscent of the sun, which is also closely tied the the legend of the phoenix.
From the centre of these flames, Simon’s stunning phoenix rises, with its wings unfurled as if about to take flight. Stray feathers carved into the trunk further down, enhance this sense of movement, as they seem to have dropped from powerfully flapping wings.

Are you as fascinated by the flames as we are? We think their texture and shape is magnificent, and creates a wonderful organic-looking flame for the phoenix to rise from.
Simon had to use a few different tools to create that look. Firstly, his Manpa Tools belts and cutters. Simon was recently sponsored by the company and is enjoying their products to take some of his sculptures to the next level. He also used gouging attachments gifted to him by The Harry Cane. These attachments were devised by Harry Cane to attach to the Stihl MS170 (Stihl’s recommended entry level chainsaw) or MSE170, and are ideal for ‘gouging’ as well as to add another level of depth. Anyone wanting to get their hands on one for themselves can visit The Harry Cane shop at http://theharrycane.de/shop.html 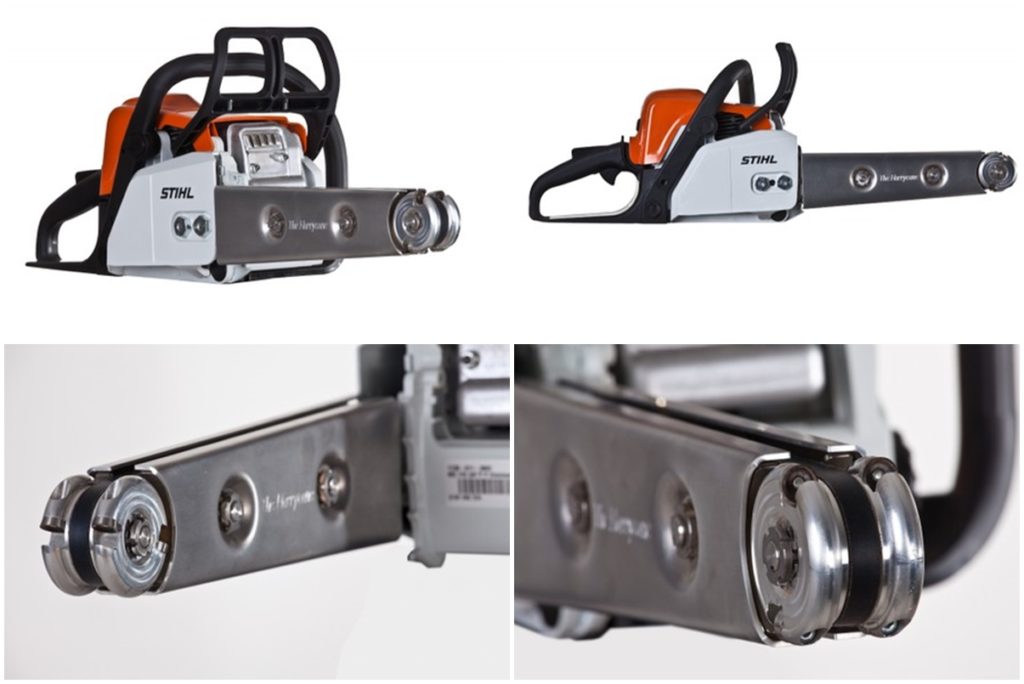 The Harry Cane attachments on the Stihl MS 170

You probably know the Douglas Fir better as a ‘Christmas Tree’. Whilst we use several species to decorate our homes over the season, the Douglas fir is the most common.

The tree is native to the Pacific Northwest in the US (the alternative names might have been a giveaway).  It was brought to the UK by David Douglas in 1827 and is considered naturalised in the UK, Europe, South America and New Zealand.

Douglas fir is extremely versatile, and can be used for lumber, food, drink and traditional medicine. It is also frequently used ornamentally in trees and park, and is useful to wildlife as food and shelter.

The only remaining US Navy wooden ships are made from Douglas Fir. 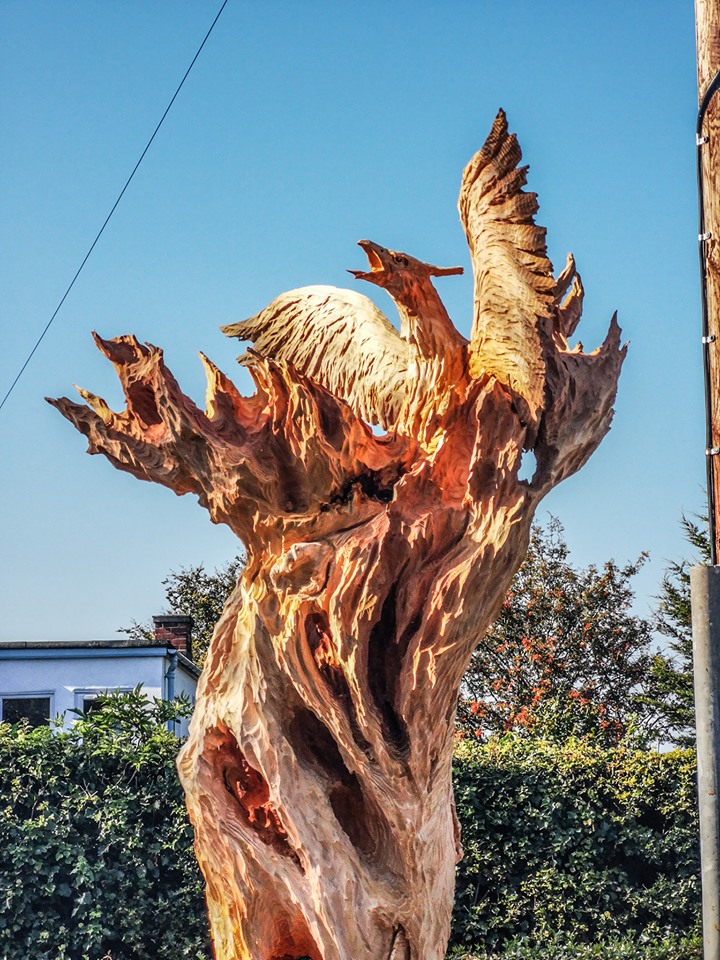 We hope you enjoy learning more about the trees Simon works with. We also hope you love the phoenix as much as we do. More importantly, as much as the owner does! We leave you this week with this testimonial from a very satisfied customer.

As always, if you find yourself in the same situation as this client, contact Simon on [email protected]  to talk about ways of giving it new life.