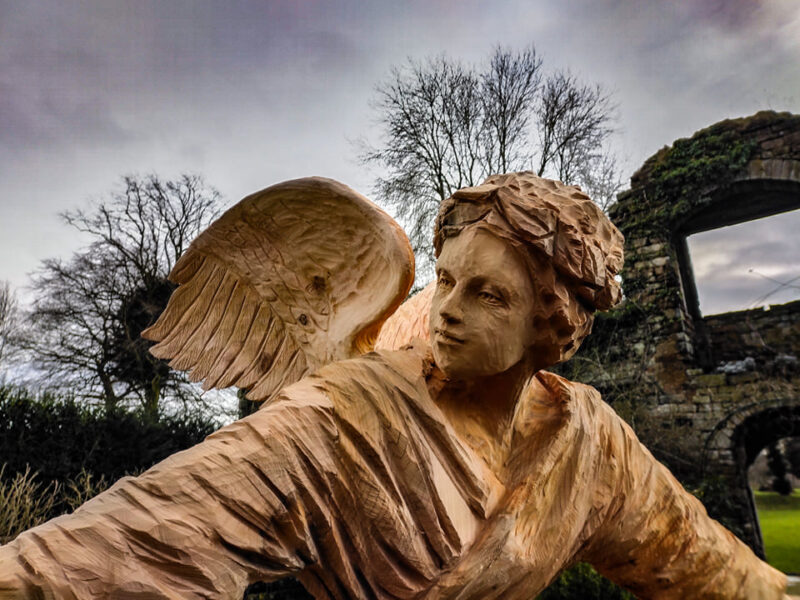 This week Simon installed his Love Leading the Pilgrim sculpture at Biddulph Old Hall. It’s been popular on social media, so we wanted to share more about the sculpture and the story behind it. It’s fascinating! A big thank you to client Brian Vowles for his input on the blog this week. 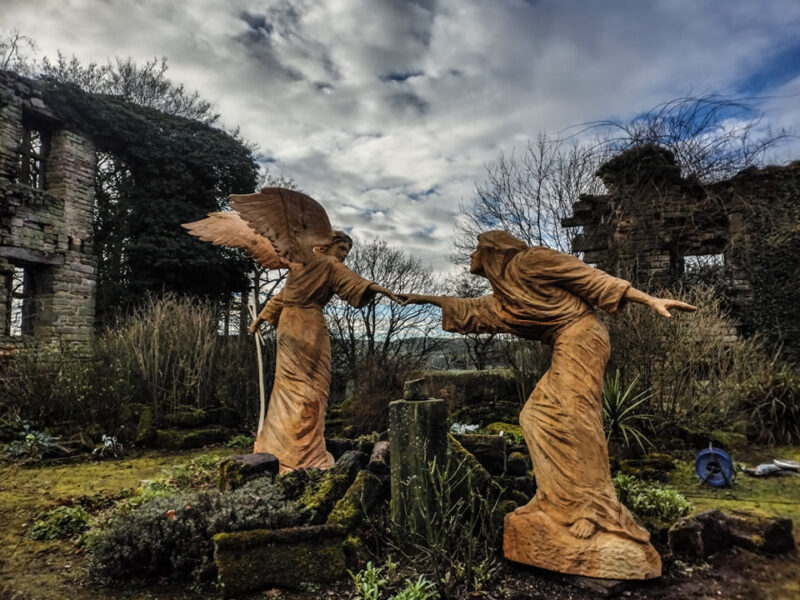 Regular readers of this blog will realise they’ve met this client before. Several years ago Simon made a sculpture based on a Bateman painting, The Pool of Bethesda. The sculpture was commissioned by the current owners of Biddulph Old Hall near Stok-on-Trent, and it was featured as a case study in Simon’s blog about the value of a chainsaw carving sculpture for historic property and is one of his most popular pieces.

Towards the end of the blog, Nigel shared that they were delighted with the angel and were saving up to commission a sculpture based on Love Leading the Pilgrim. So needless to say, this sculpture has been a long time in the making! 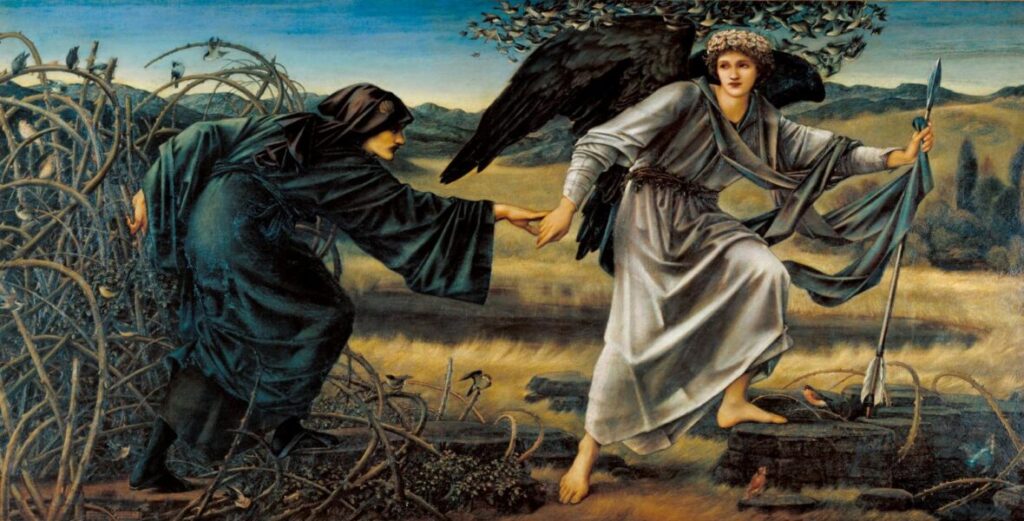 Biddulph Old Hall is an ideal setting for these very classical sculptures. Originally a mansion constructed 1530-1580, it came under siege by Parliamentarians in 1644. Later owners added other structures in the 17th, 18th and 19th centuries, but nobody rebuilt the original mansion. Its upstanding ruins remain to this day.

The Biddulph family sold the property to James Bateman in 1861, and his son Robert lived in the habitable part until his death in 1922.

For those wondering about the subjects of both sculptures, this is where the link comes in!

Robert Bateman was the leader of a group of second-generation Pre-Raphaelite artists.  As the owner and resident,  he painted most of his best-known paintings in the studio at Biddulph Old Hall. This included The Pool of Bethesda; the inspiration for Simon’s first sculpture. 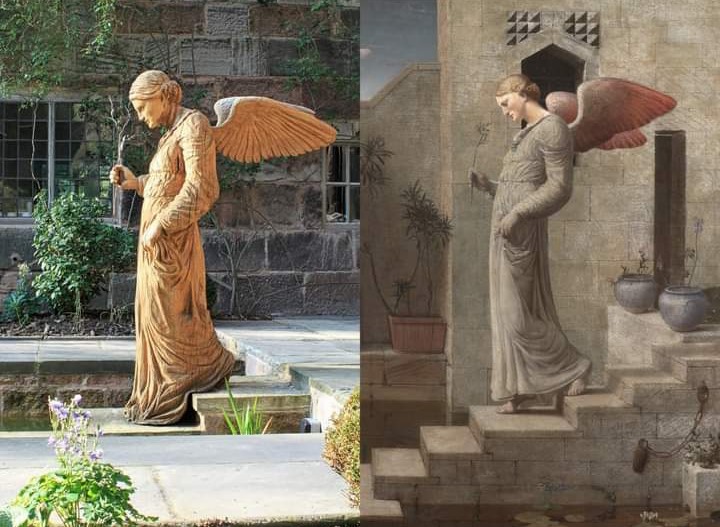 Simon’s Angel at the Pool of Bethesda and the Bateman painting it’s based on.

The Link with Burne-Jones

So how did the clients get from Bateman to Burne-Jones? Bear with us!

We know the artist Edward Burne-Jones was an inspiration to and influence on Bateman throughout his career. It appears that inspiration also extended beyond the canvas! One of Bateman’s projects was creating a romantic garden among the ruins of the mansion. That garden was essentially a ‘Briar-Rose’ garden, reminiscent of The Legend of the Briar Rose by Burne-Jones. 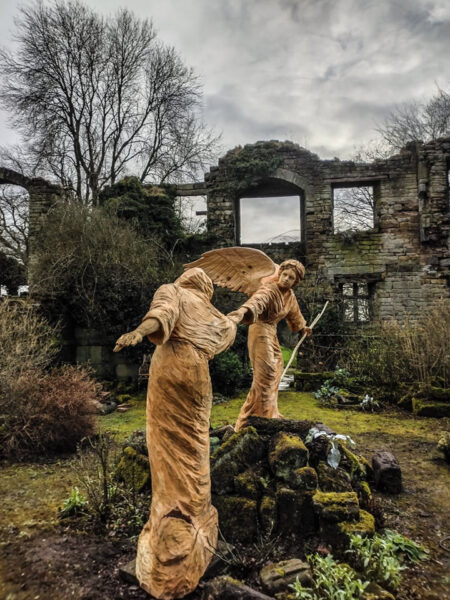 Fast forward to the 21st century… Brian and Nigel found images of Bateman’s garden and wanted to recreate the same ambience in their garden design. The garden they’ve created replicates the style and wildness of that garden, but without slavishly following Bateman’s planting. Largely because the plans no longer exist!

There’s a small courtyard among the mansion ruins, and Nigel and Brian wanted to commemorate the completion of the restoration with a sculpture in the centre.
With all the connections between Bateman, Burne-Jones, and the garden, Burne-Jones’s magnificent paintings ‘Love Leading the Pilgrim’ was a fitting choice for the sculpture.

The angel in Simon’s Love Leading the Pilgrim sculpture

This next paragraph is for those who love ‘it’s a small world’ coincidences and connections!

As Brian and Nigel were researching the painting, they came across a tapestry in the William Morris Museum. It was designed by Burne-Jones and features the same subject of Love leading the Pilgrim. That tapestry was then turned into an embroidery kit by Morris & Co.

In a massive coincidence, Nigel’s great, great, great Aunt (Lady Margaret Bell) bought the kit and embroidered it for her home! Another family connection they hadn’t known about!

The Burne-Jones tapestry Nigel and Brian discovered during their research.

After years of saving and waiting, Nigel and Brian were finally able to commission the sculpture in September 2021. Sadly Nigel passed away not long after they had commissioned the piece. So now the finished sculpture is dedicated “not only to Robert and Caroline, but also to Nigel’s legendary vision, and to celebrate his life and the magnificent restoration of Biddulph Old Hall that he inspired.” 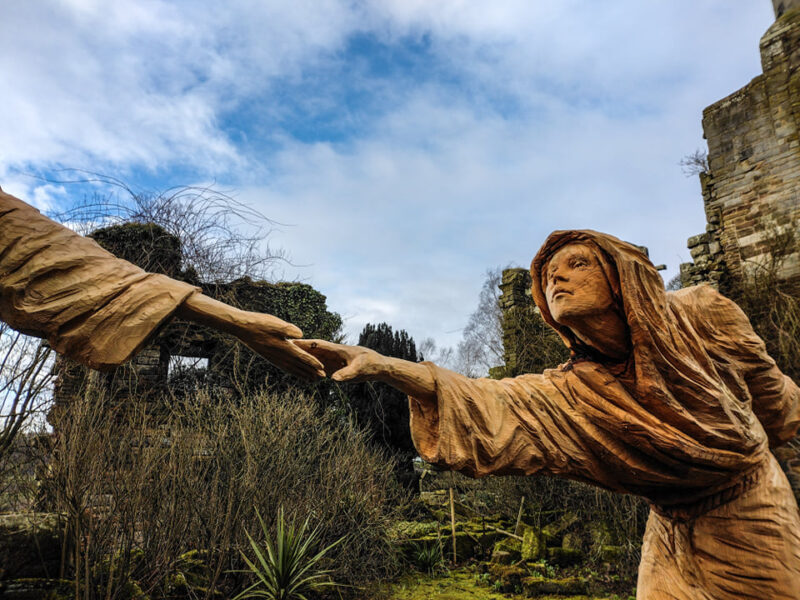 Every commission comes with its joys and its challenges. For Simon, as well as being able to create something that honoured the history of the place, he found it fun to create something based on the painting. It gave him plenty of opportunities to create in a style he loves, and use his drapey skills to the max!

Social media comments have been SO encouraging with one follower commenting…

“The subtleties of gesture and expression couldn’t be topped in any medium – and you’ve done it in wood!”

However, what matters most is what the client thinks… 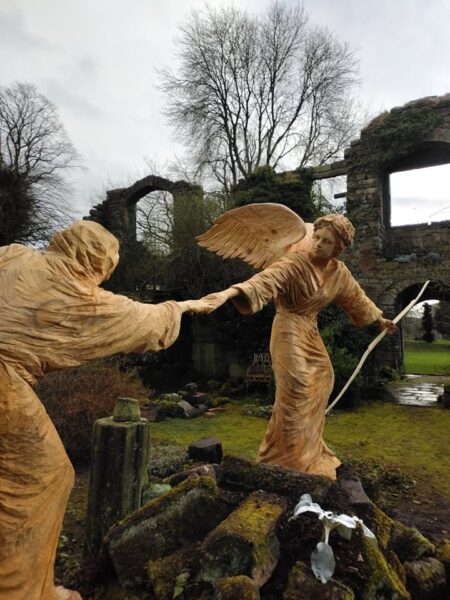 “Simon’s skill in transcribing the 2-D image from the painted canvas into a vibrant, sinuous and arresting sculpture is quite awe-inspiring. Nigel and I always had confidence that Simon would do the commission justice, but it is a triumph beyond my wildest dreams. It is such a fitting memorial, not only to Robert & Caroline but also to Nigel, whose passion for this place could not be better envisaged than in these two statues. They epitomise the struggles we faced together as we sought to restore Biddulph Old Hall and its gardens and grounds, and could not be more perfect.”

As we mentioned earlier, massive thanks go to Brian for his assistance with this blog. He’s a wealth of information and although we couldn’t include all the story or details, it was a fascinating read.

If you would like to know more about Biddulph Old Hall, there are many articles around. We especially enjoyed THIS ONE in House and Garden though.

As always, if you would like to commission a sculpture for your home, business or community, contact Simon using the form at www.treecarving.co.uk/contact/.