Sporting Sculptures made by Simon

by  This week on Twitter we shared a portrait of sporting legend Bill Shankly that Simon made. He was one of four famous Liverpudlians that Simon created live at the Pierhead in 2018. Afterwards, the sculptures were all auctioned off for children’s charity, Variety. It got us thinking about other sports figures Simon has carved in the past and inspired this blog! And so, we hope you enjoy revisiting these sporting sculptures made by Simon over the years… 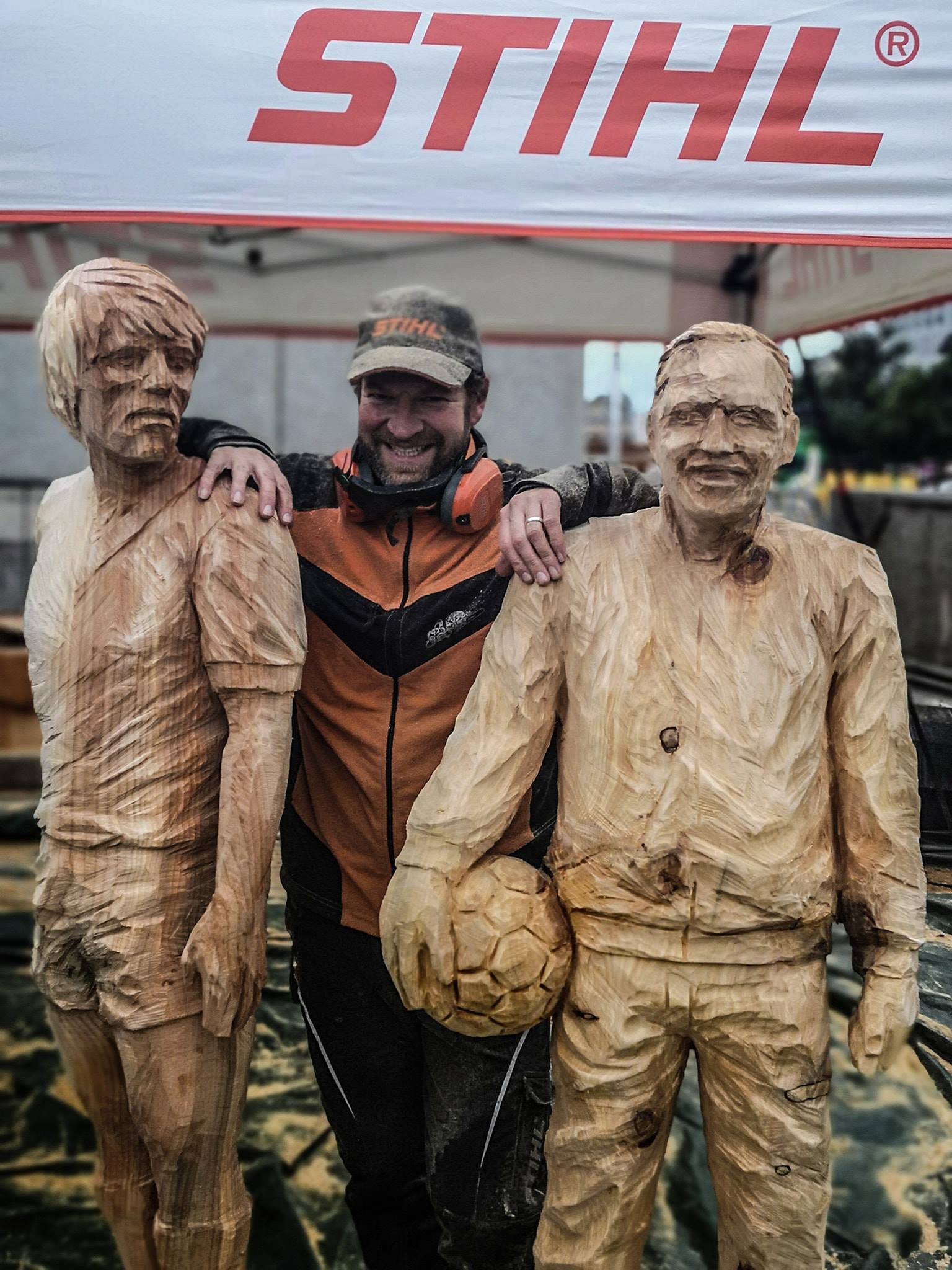 Simon with his portraits of Kenny Dalglish and Bill Shankly

Sporting Sculptures Made by Simon: Queen of the South Footballers

Staying with the football (soccer for our international readers!) theme, our first flashback is to the Queen of the South players from 2019. This sculpture was installed outside the Queen of the South ground in Dumfries and represents three generations of football. Each of the players represents a different era, achievement, and contribution to the club. We think you’ll agree that each one is a fantastic likeness to the person… 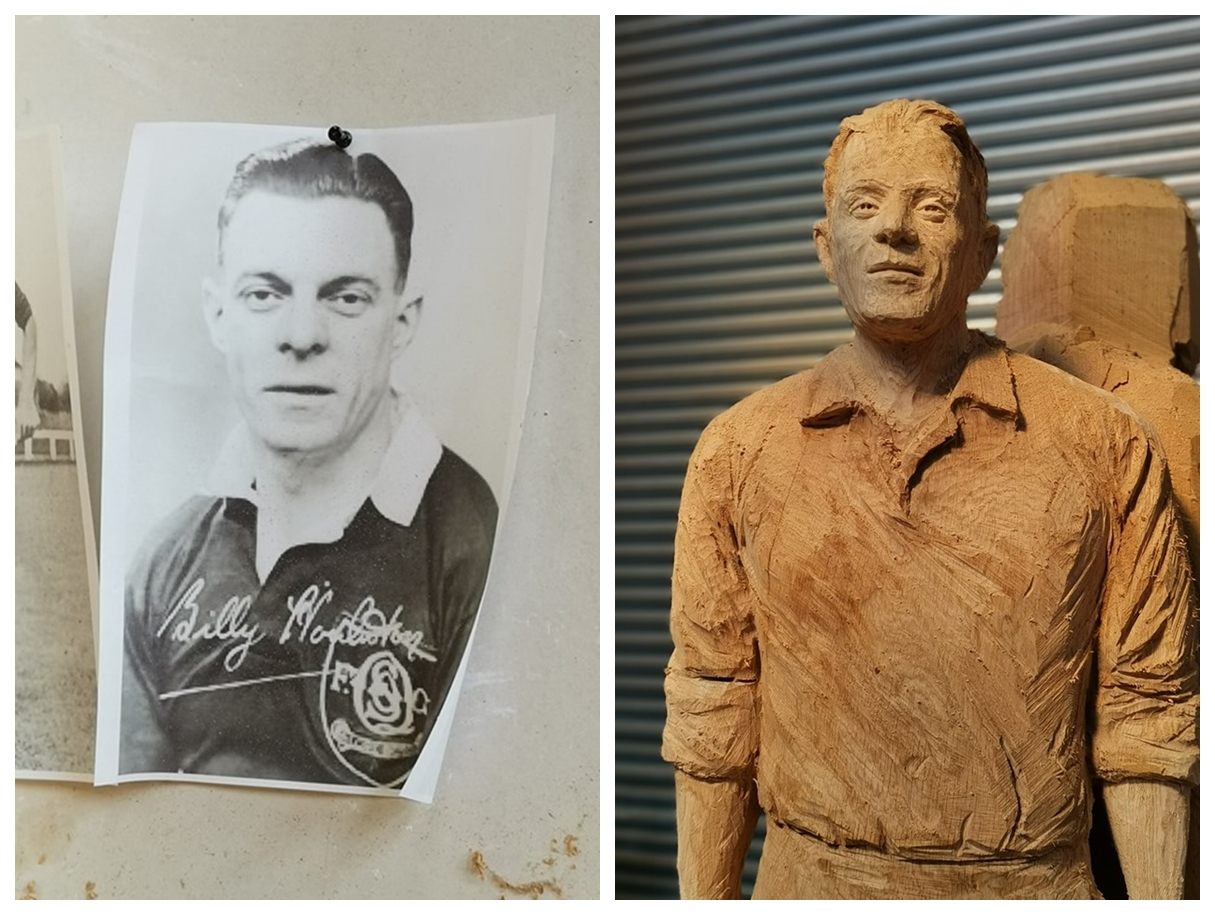 Making the sculpture definitely had its challenges though! Originally, the hope was to create the sculpture out of a single piece of oak. However, as Simon began to work, he discovered a large crack in the timber. He initially thought he could overcome that by turning the piece upside down. BUT! Once he also factored in the Scottish weather, he realised that crack was going to cause problems. Thankfully he found another suitable piece of wood to use and attached that sculpture to the other two. Despite this hiccup, the club, fans, and players were all delighted with the finished sculpture. If you would like to know more about the story behind this sculpture, why not read our blog: Queen of the South Legends Unveiled? 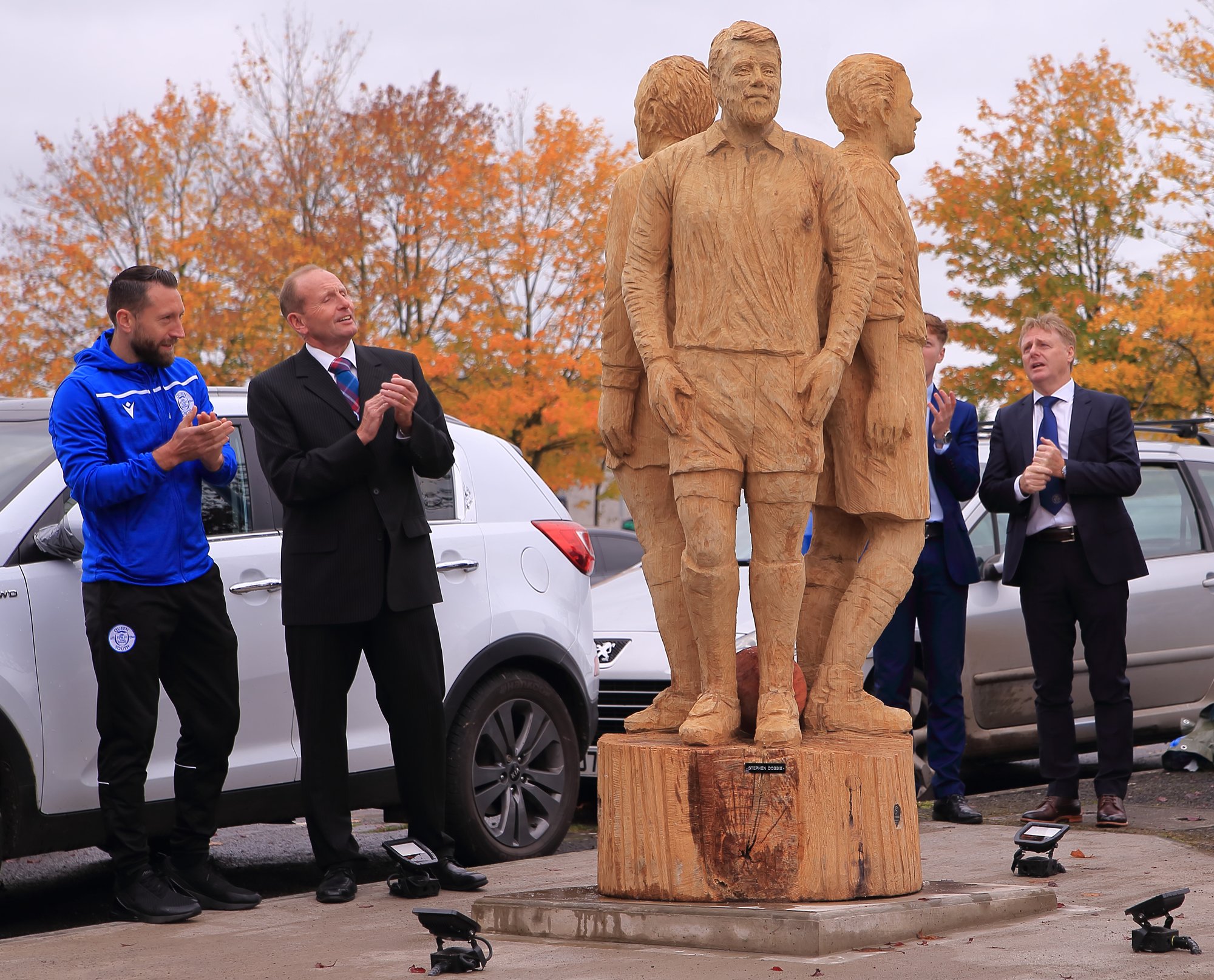 Stephen Dobbie pictured at the unveiling with his likeness

Moving on to another classic British sport now, we bring you Simon’s vintage cricketer!
The cricketer has had lots of attention in the past. Whenever we share the photos it’s definitely a popular sculpture! Contrary to what people expect though, it isn’t actually based on anybody in particular.
It was a commission from Hopkins Homes in 2019, and they just wanted ‘a vintage cricketer’. The company was building a housing estate on the former site of Norfolk County Cricket Club and felt the sculpture would be a meaningful addition to one of the green spaces. The site certainly had a lot of history. Five first-class and 13 a-list matches were played there during its time as a cricket ground!
Simon researched what the sport looked like during the 19390s, and created a sculpture of a player recognisable as being from that era.

For those who would like to see the cricketer in situ, we recently found a website with photos of varying sporting sculptures – and the cricketer is there!  Visit http://www.offbeat.group.shef.ac.uk/statues/STUK_Anonymous_50.htm to have a peak! 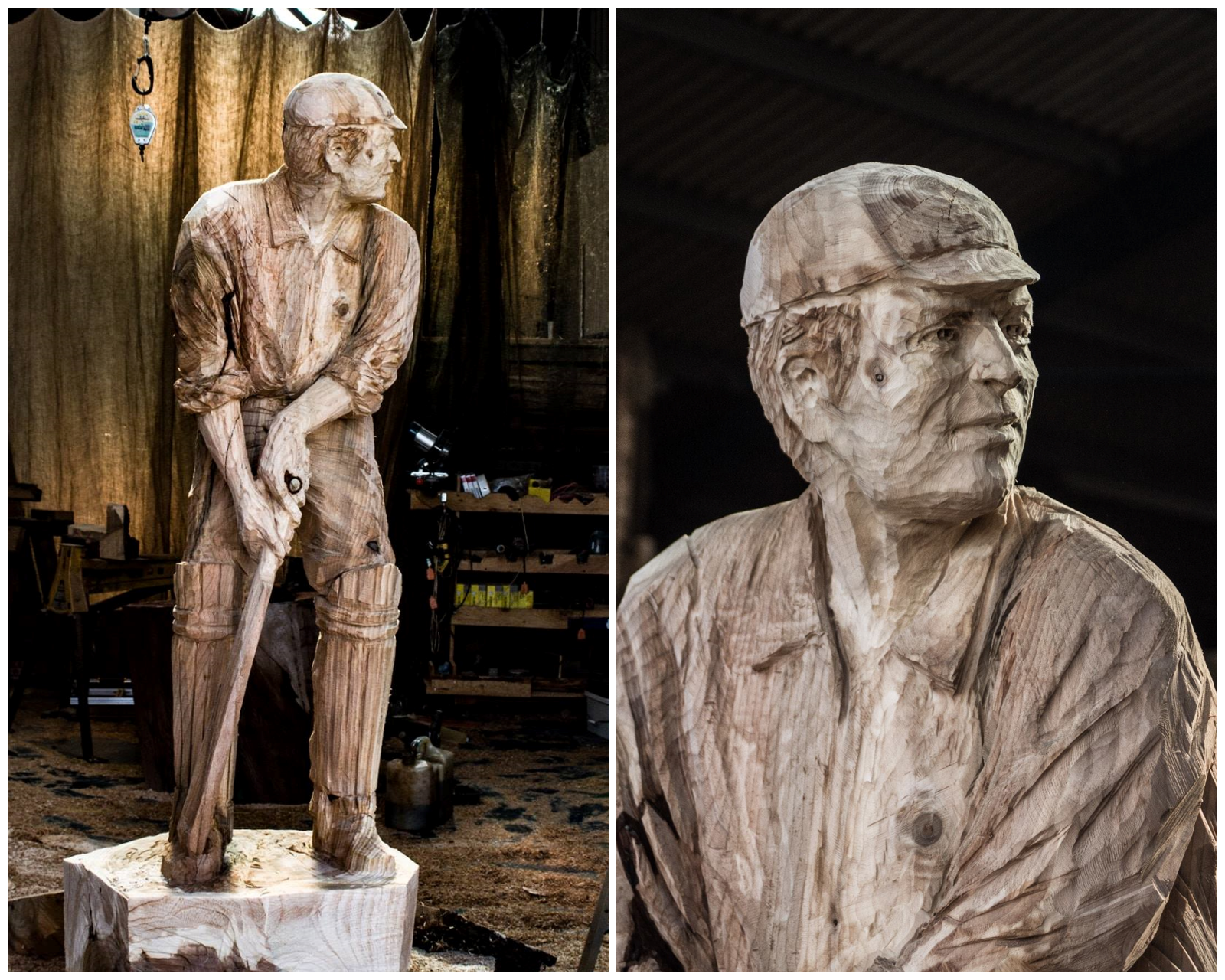 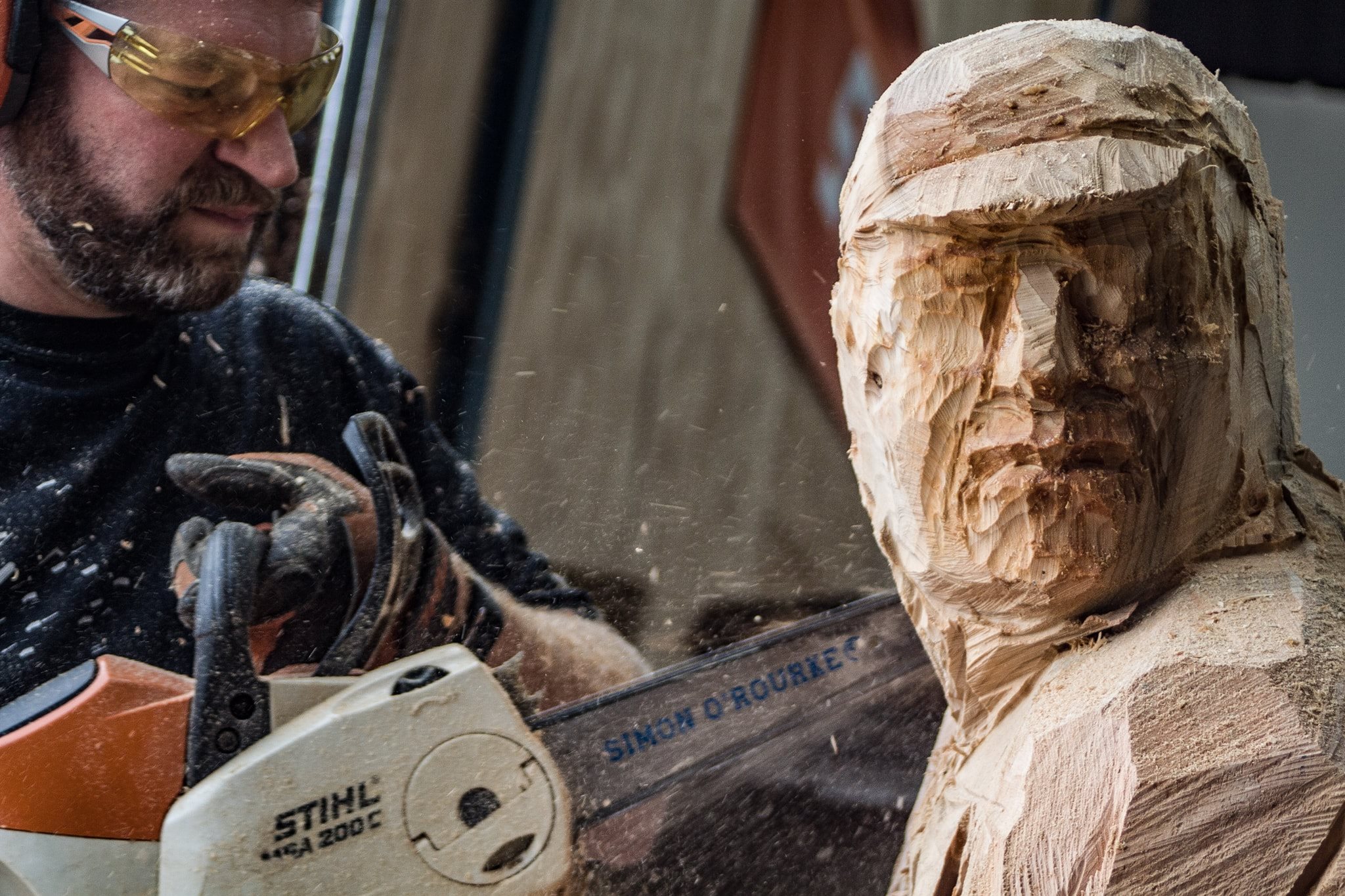 Sporting Sculptures Made by Simon: Jockey

The next of our sporting sculptures flashbacks is a very different sport. Horse racing!

Simon created this sculpture in 2015. Like the cricketer, it isn’t based on anybody in particular, but one of Simon’s employees thought it looked like Norman Wisdom! What do you think?! 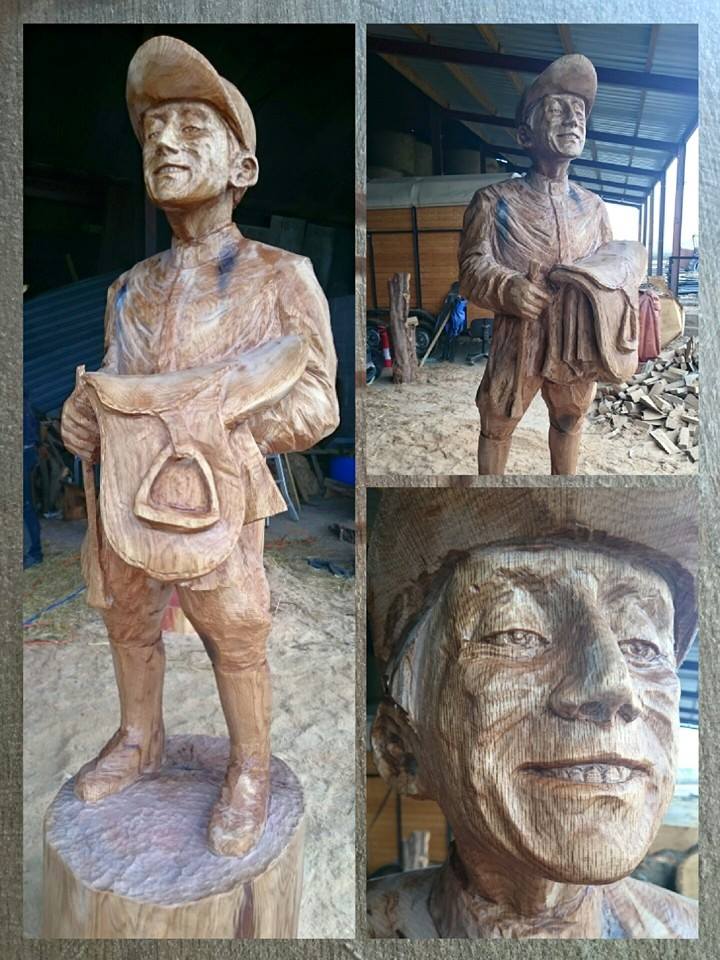 Did you know skateboarding was going to make its debut in the Olympic Games in Tokyo this year? Even though The Games didn’t happen, we think it means we can definitely include this sculpture of a ‘Skater Chick’ that Simon made in 2010. You can find her in Eirias Skate Park in Colwyn Bay, North Wales. As always, Simon invites us into a moment in a bigger story with this sculpture. We love that she is ‘mid trick’ and that the movement Simon has created throughout the clothes and with his attention to anatomy, really shows the energy, passion, and skill of this fictional skateboarding girl. 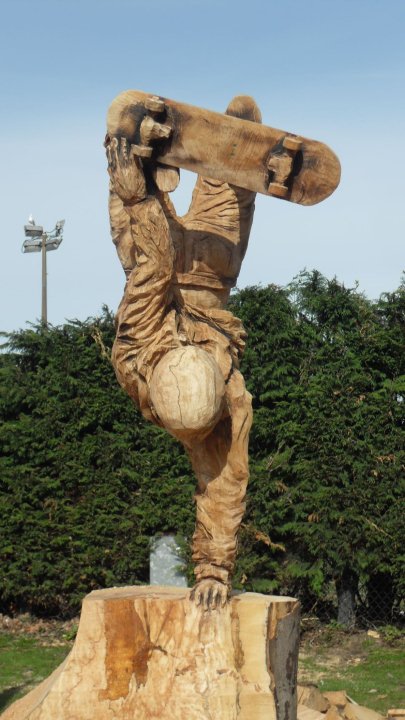 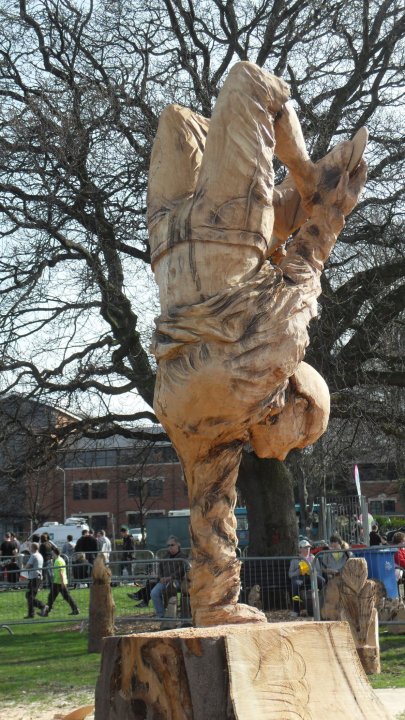 Sporting Sculptures Made by Simon: Timbersports

Did you know Timbersports is a thing? There’s actually a world championship where people from around the globe compete against each other. The athletes compete in the use of axes and saws in manners typical for ‘lumberjacks’. Stihl founded the world championship in 1985 and it grew over the years. It now includes six different disciplines, and collegiate and rookie leagues. As you may expect, this year’s championship was cancelled. However, we look forward to a return in 2021!
Anyway, back to the sculptures! 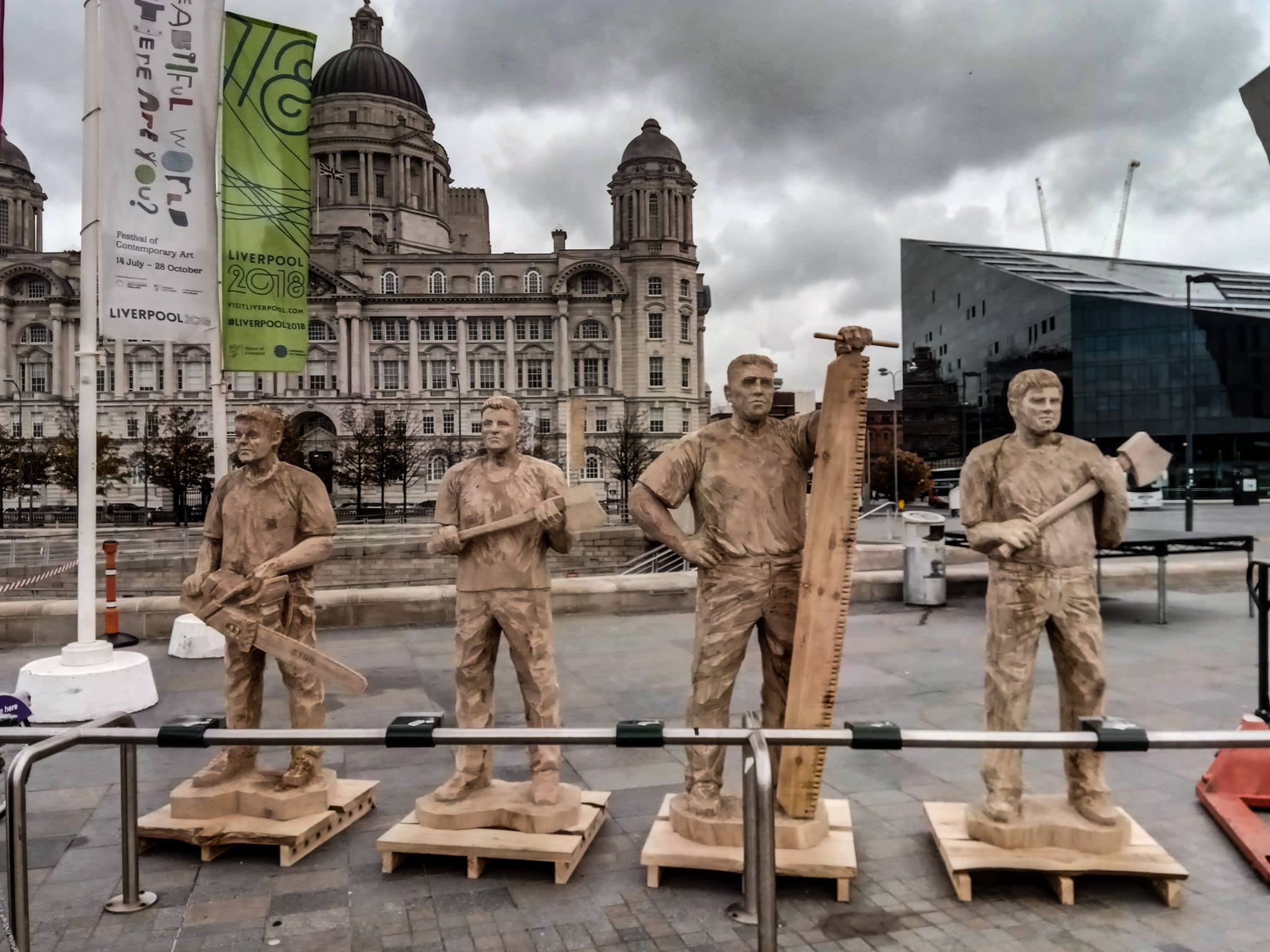 In 2018 the Timberpsports championship was held in Simon’s hometown of Liverpool. Stihl commissioned him to create life-sized sculptures of some of the participating athletes. The sculptures stood in the entrance and greeted spectators as they arrived. So fun!
Once again these sculptures show Simon’s ability to create an accurate likeness and tell a story in his portraits. Jason Wynard definitely seems to approve of his! 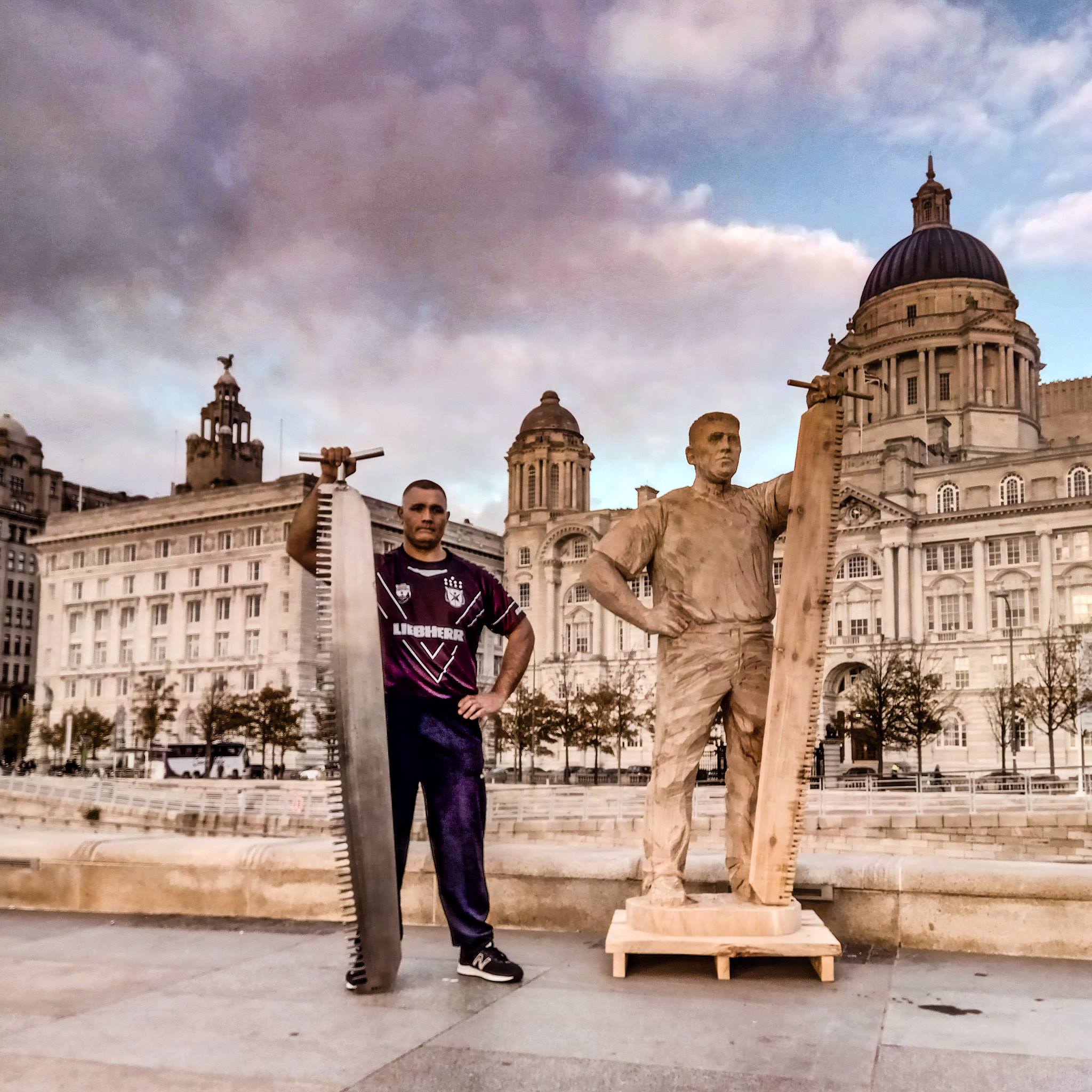 Commissioning a Sporting Sculpture by Simon

As you can see, sporting sculptures can make a perfect addition to a sports ground or an event. They help tell stories of a place and honour the people who take part. They can connect generations too in the love of a hero, team or sport. And they always make a fine attraction!

Bizarrely for someone who lives in Wales, Simon is yet to create a rugby sculpture. Could you be the first?! Or maybe you’re more of a tennis, swimming or even cheese rolling fanatic?!

Whatever the sport, if you would like to commission a sporting sculpture, we would love to hear from you. As always, although you can reach us on social media, we recommend filling out the form at www.treecarving.co.uk/contact/. We’re looking forward to hearing from you!