Sculptures of Myths and Legends

Mythology and folk stories have been the subject of several sculptures Simon has made. Each time there is a challenge for Simon. He needs to create something recognisable and something that tells the well-known story. At the same time though, he also wants to bring something fresh or unique. Creating sculptures of myths and legends helps preserve a culture, and aids us in passing down the stories that shaped a nation. It’s a lovely thing to be part of!
In this week’s blog, we invite you to join us as we revisit some of the sculptures of myths and legends that Simon has made… 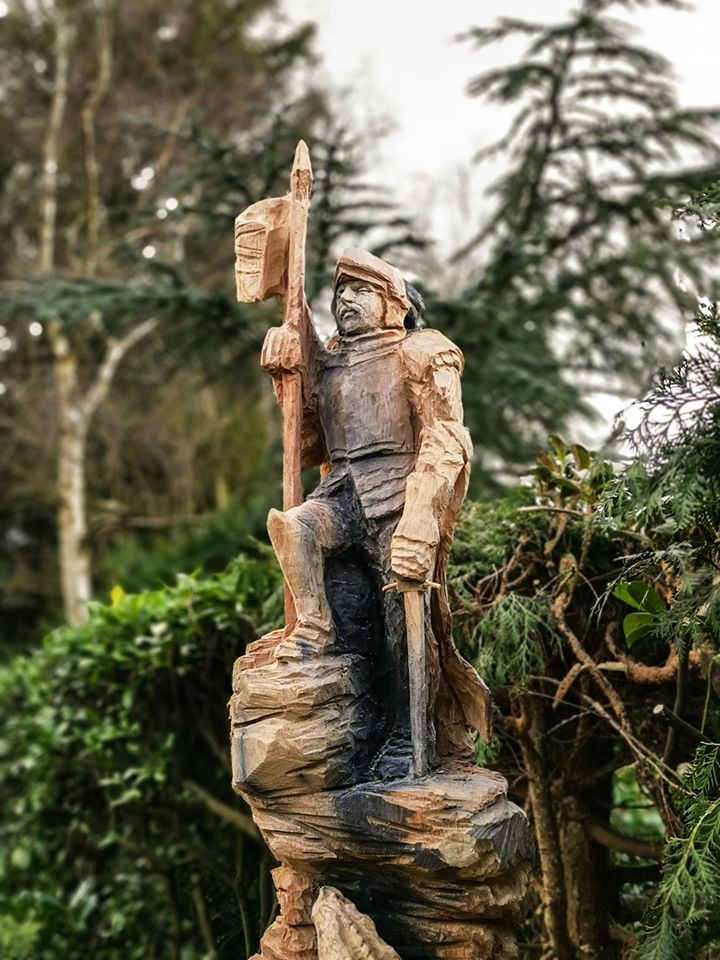 St George and the Dragon

St George and the Dragon is the most recent of Simon’s sculptures of myths and legends. The client had a stump in her garden and contacted Simon to see what he could make of it. Many sculptures of St George show him either doing battle with the dragon or victorious after the fight. The client didn’t want anything too macabre in her garden though – understandably!!! So, in this case, Simon depicts George before the battle. We see him standing in his armour with weapons ready, as the dragon creeps up the stump towards him. If you would like to know more about the choice of St George, or the process of making the sculpture, visit our St George and the Dragon blog. 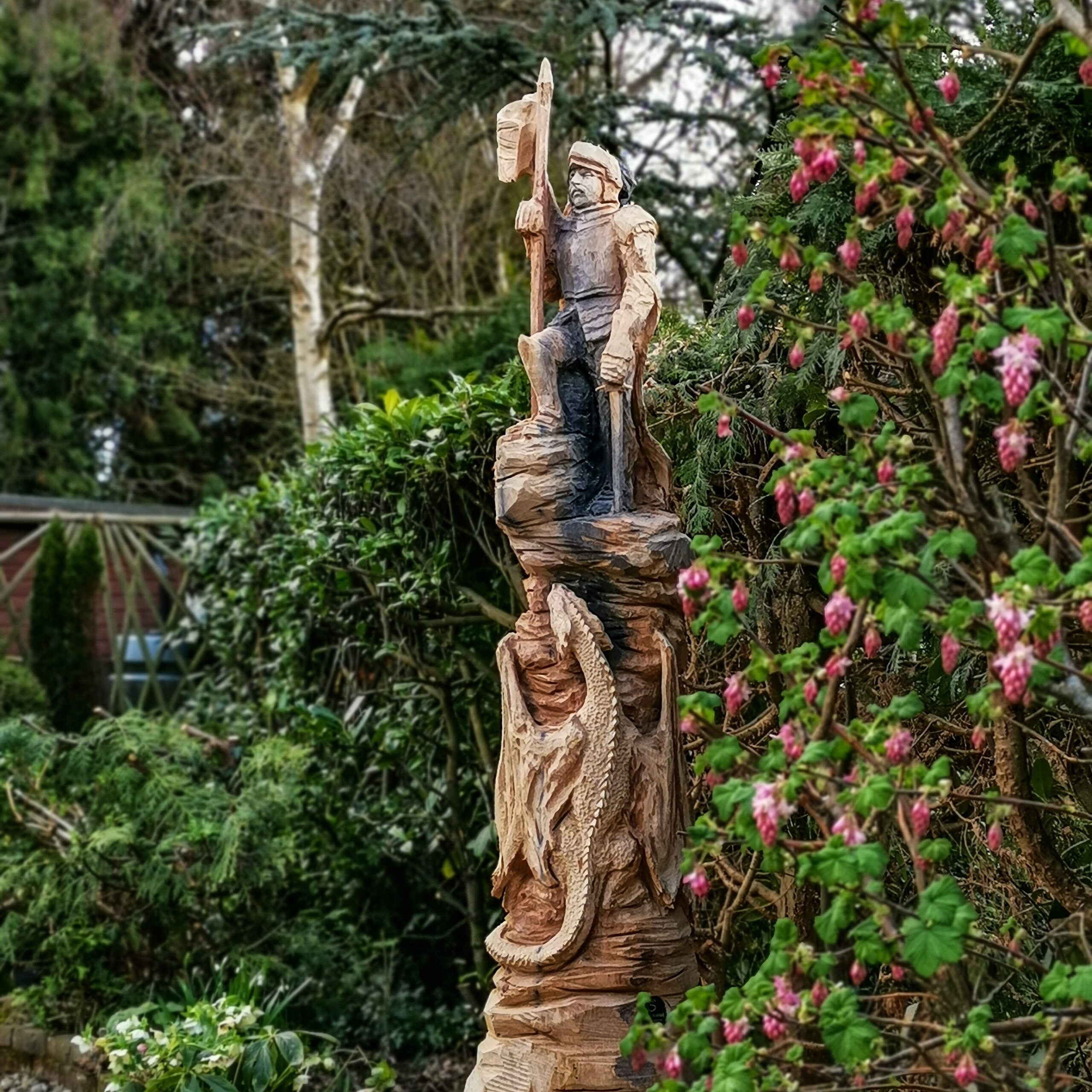 The next of our sculptures of myths and legends takes us to Eastern Europe. Svantevit is the Slavic god of war, fertility, and abundance. It was created for the exhibition at Putgarten, Germany in 2018. With his four heads, he is immediately recognisable to people familiar with Slavic mythology. He is also carrying a horn and sword which are an important part of the stories of Svantevit. Simon makes his mark though with his detail in the faces and texture in the clothing. The drapery in the cape in particular adds some lovely movement to this 3m sculpture. 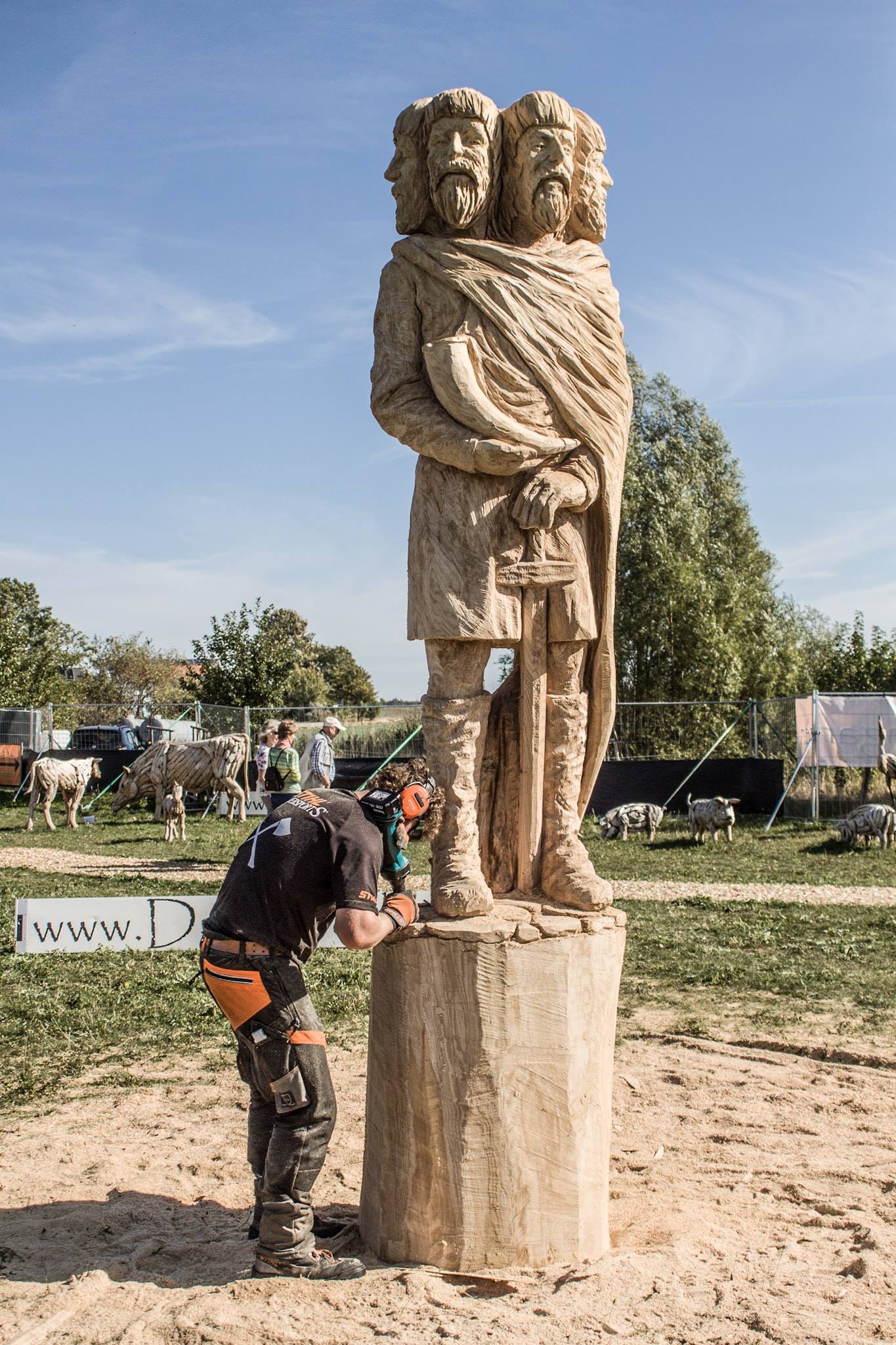 The Hydra from 2019 is the next of our sculptures of myths and legends Simon has created. Initially, this sculpture was going to be a flock of birds or an animal rising from the ground. When Simon arrived on-site though he found the tree was unsuitable and chose to create the Hydra instead. The devil is definitely in the detail as they say with this one though. Look at all that scaly texture and the individual teeth! Definitely a legendary sculpture!!! 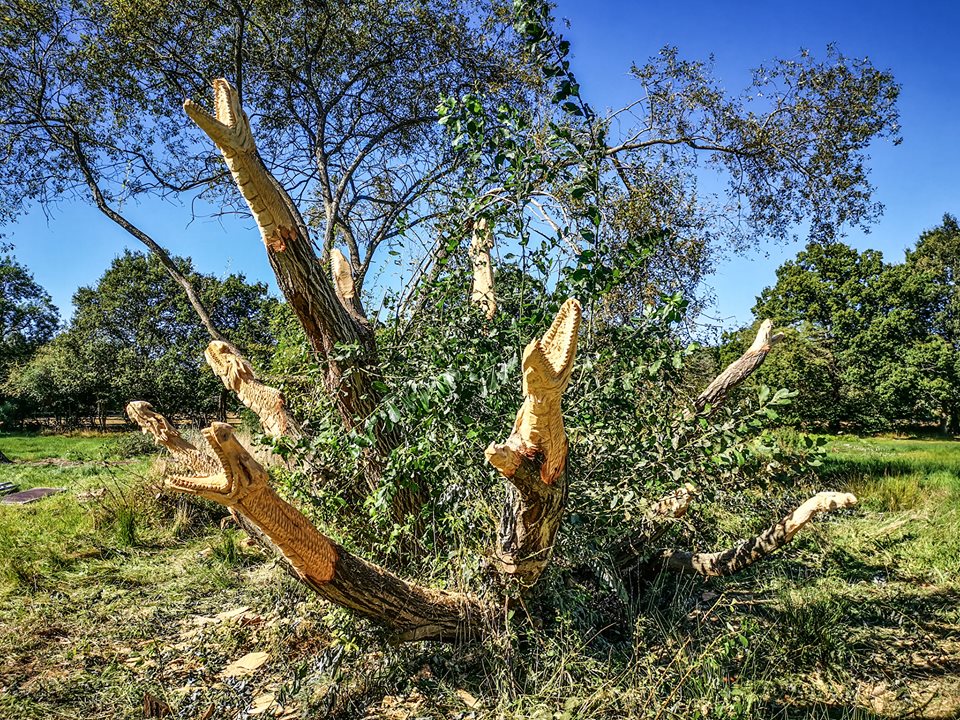 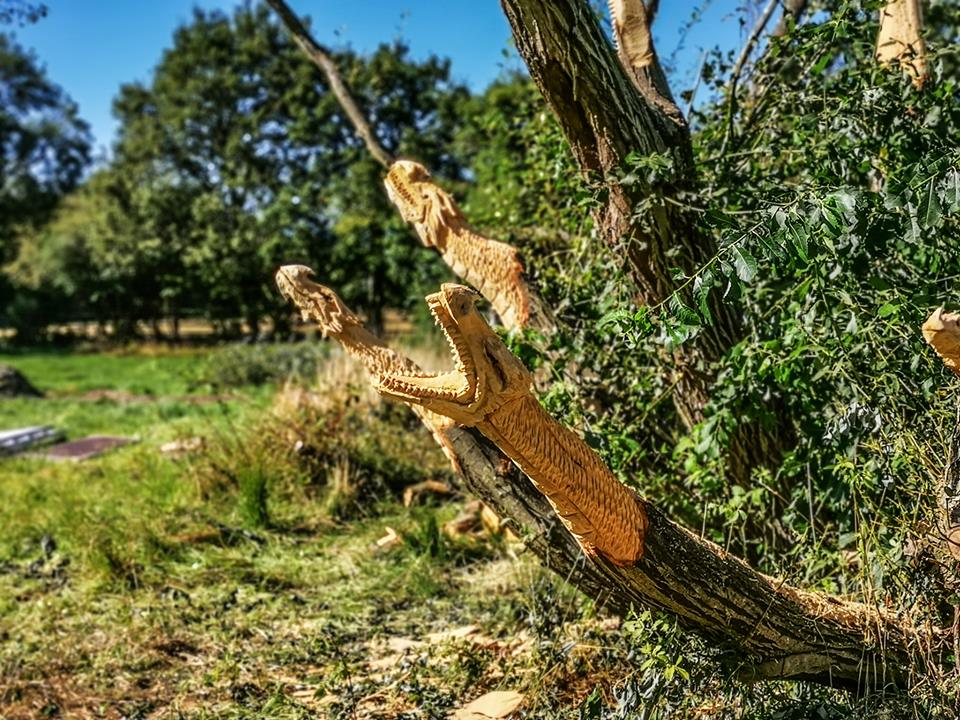 Close up of the heads showing the detail and texture.

From Eastern Europe and Greece, we come much closer to home for the next of Simon’s sculptures of myths and legends: Lancelot and Guinevere.
Simon created this sculpture at an event in 2010, and it beautifully depicts the romance between the two characters. Even if we had never heard the story of Lancelot and Guinevere before, we get a sense of that story through the characters’ pose and facial details. Their eyes alone tell a story! Although not as textured as Simon’s later sculptures, we also love the hints of movement in the clothing which add to the realism.
Simon named this sculpture ‘Forbidden Fruit’. This sense of the romance being taboo or forbidden is enhanced by his choice to show the characters beneath a fruit tree, which hints at the story of Adam and Eve eating the forbidden fruit in the book of Genesis. 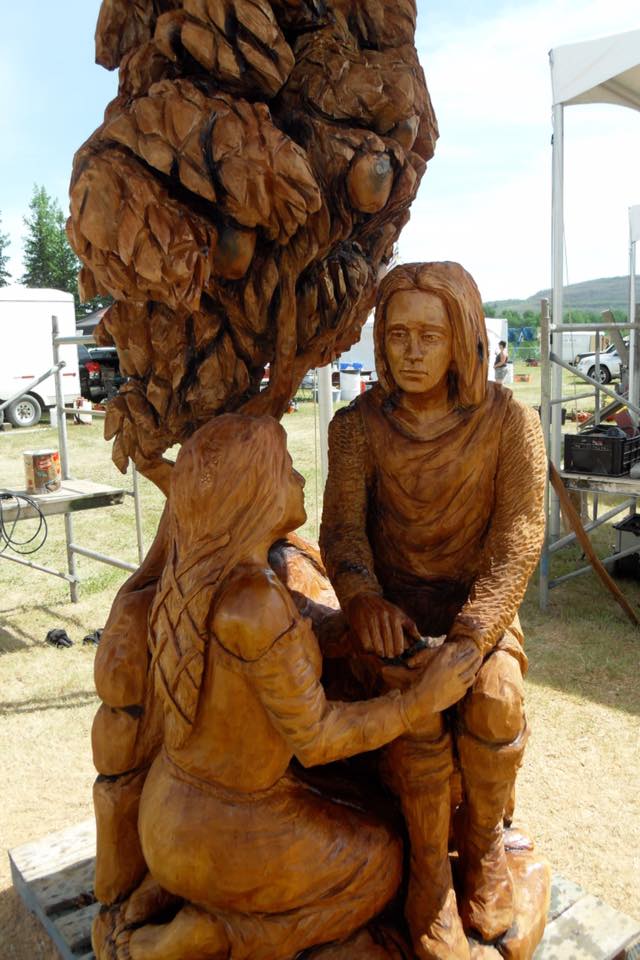 Our next sculpture is another Welsh legend… Tegid Foel! Also known as ‘The Giant of Penllyn’!
Although the legend of Tegid Foel may be Welsh, he was created many miles away at Chetwynd International Chainsaw Carving Championship in 2012. Tegid Foel is the husband of Ceridwen in Welsh mythology. Funnily, the translation of his name into English would be ‘Tacitus the Bald’! Simon truly captures that description in this sculpture!
Just as Tegid Foel is a giant in Welsh mythology, this sculpture stands around 14′ tall. Simon carved him in separate parts and assembled him using scaffolding and a forklift truck. For anyone interested, Simon has an album documenting the process of creating Tegid Foel on Facebook. Just click HERE to see it. It also has close-up photos of details like the feet, belt, and hands. We definitely think it’s worth a look! 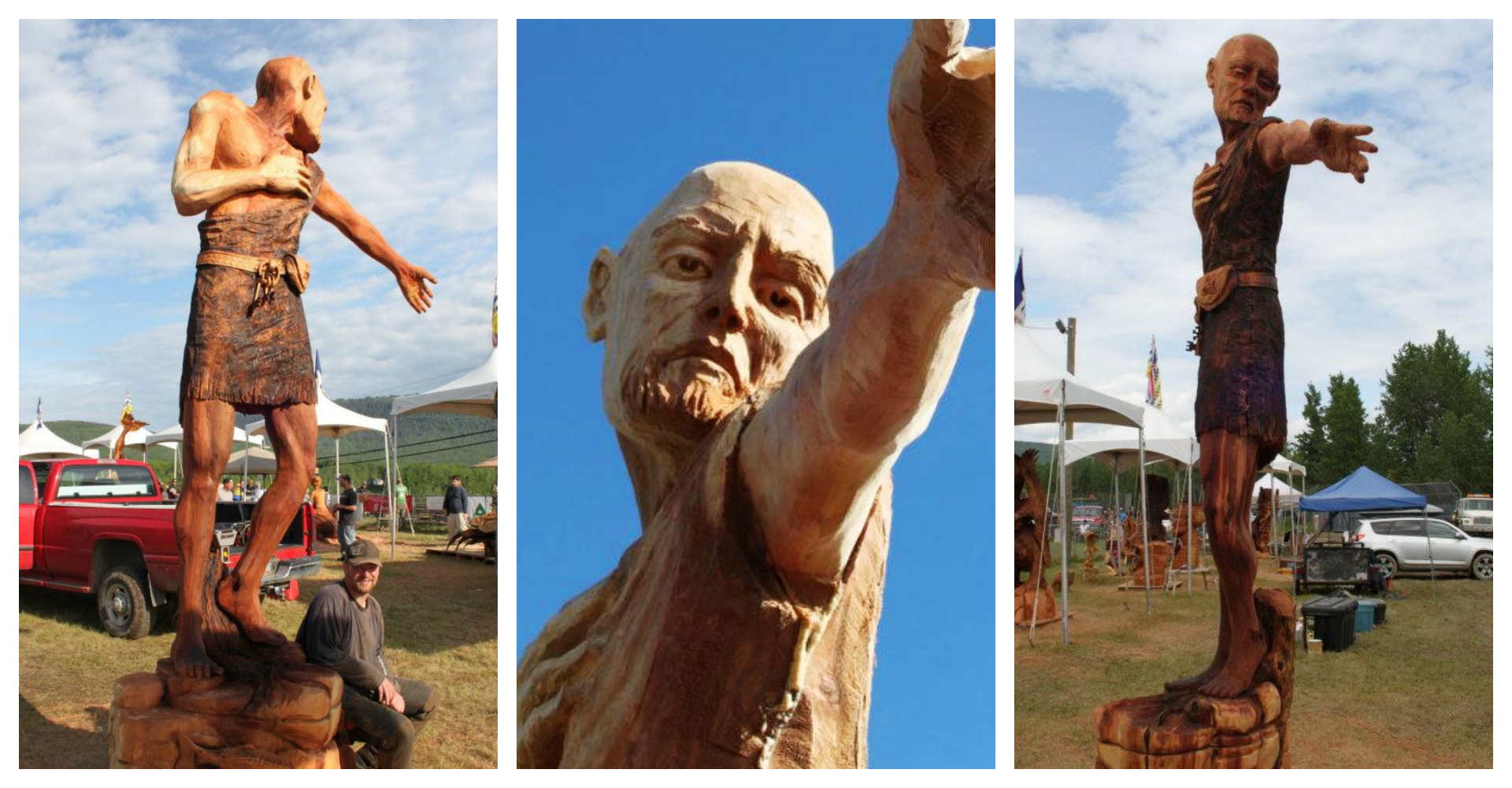 Our last sculptures of myths and legends are also Welsh in origin. The Mabinogion is a compilation of Welsh stories, originally written in Middle Welsh. It’s thought they were compiled in the 12th Century but were passed down orally for years before that.
Back in 2010, Simon created sculptures of several of the characters in the Mabinogion (both human and animal) for a holiday park in Wales. There is something special about living and working in Wales, and being able to help preserve the history and culture of the nation in this way. Just like Tegid Foel, Simon added a full album of the Mabinogion on Facebook which you can visit HERE.
For now, we will just share these few.  The rougher ‘unfinished’ textures blend perfectly with the wooded surroundings. In Autumn they compliment the colours of the Welsh hills and woods, and in summer they contrast beautifully. 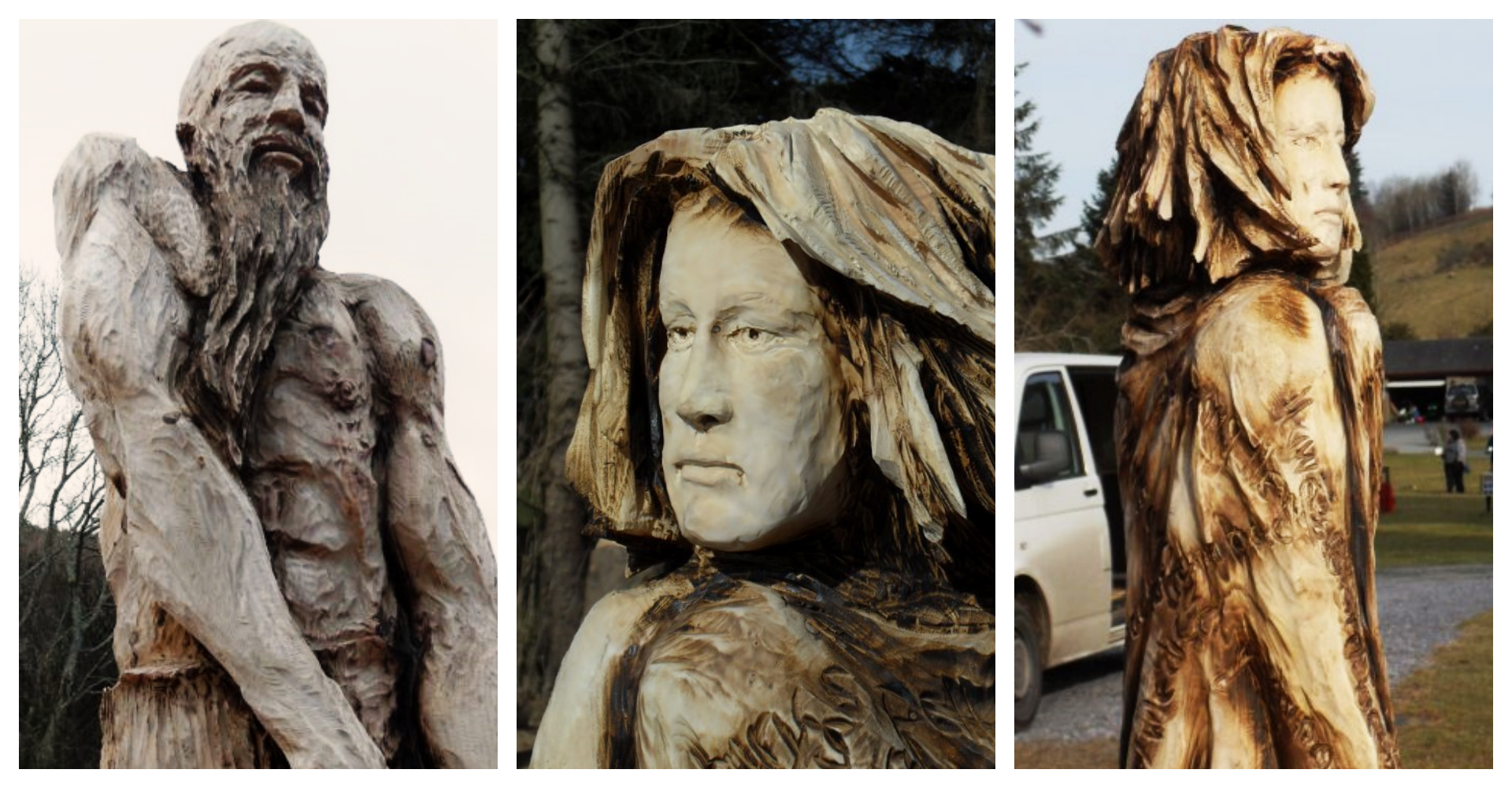 Why Create Sculptures of Myths and Legends?

As we said, a sculpture of a local myth or legend helps us preserve culture. In generations past, we might have spent time telling local stories to one another or reading them for ourselves. The world has expanded massively though. Although this opens up new experiences and learning for us, which is fantastic, it is sometimes at the cost of losing something of our own history. Commissioning a sculpture that depicts local folklore can really help in sharing something of the history and culture with visitors and locals alike.

If you would like to commission your own sculpture of a myth or legend, contact us via the form on www.treecarving.co.uk/contact/ and Simon will be in touch!

Which is Better: Wood or Bronze Sculpture?