A Sculpture for All Seasons – Sculptures in the Snow

One of the lovely things about a wooden outdoor sculpture is how they change with the seasons. Obviously, there is weathering which changes their appearance over time. But even the different lighting and weather gives the sculpture a different look as the seasons change. Our recent wintery weather prompted people to post a few of Simon’s sculptures in the snow, and it got us thinking it would be good to share some of them… 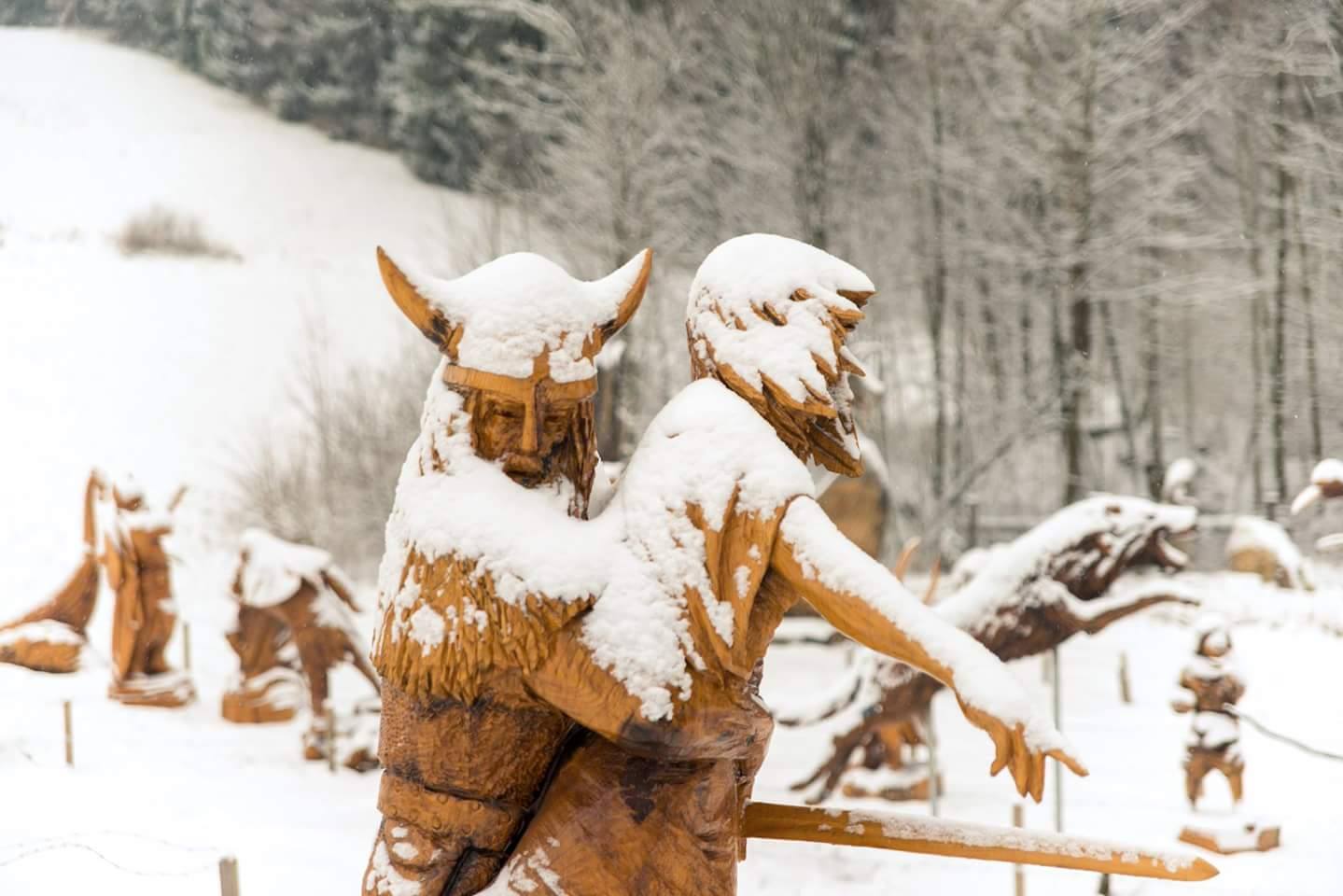 Sculptures in the Snow: Viking Raid

The first of our sculptures in the snow is Viking Raid. This scene was created for the 2016 Huskycup – and won! The three sculptures depict the kidnapping of a young woman during the raid of a village. Given the Scandanavian origin of the Vikings, the snow transforms this into a different, but a still-realistic story. There is a definite striking beauty in the stark contrast between the snow, and the warm wooden sculpture. 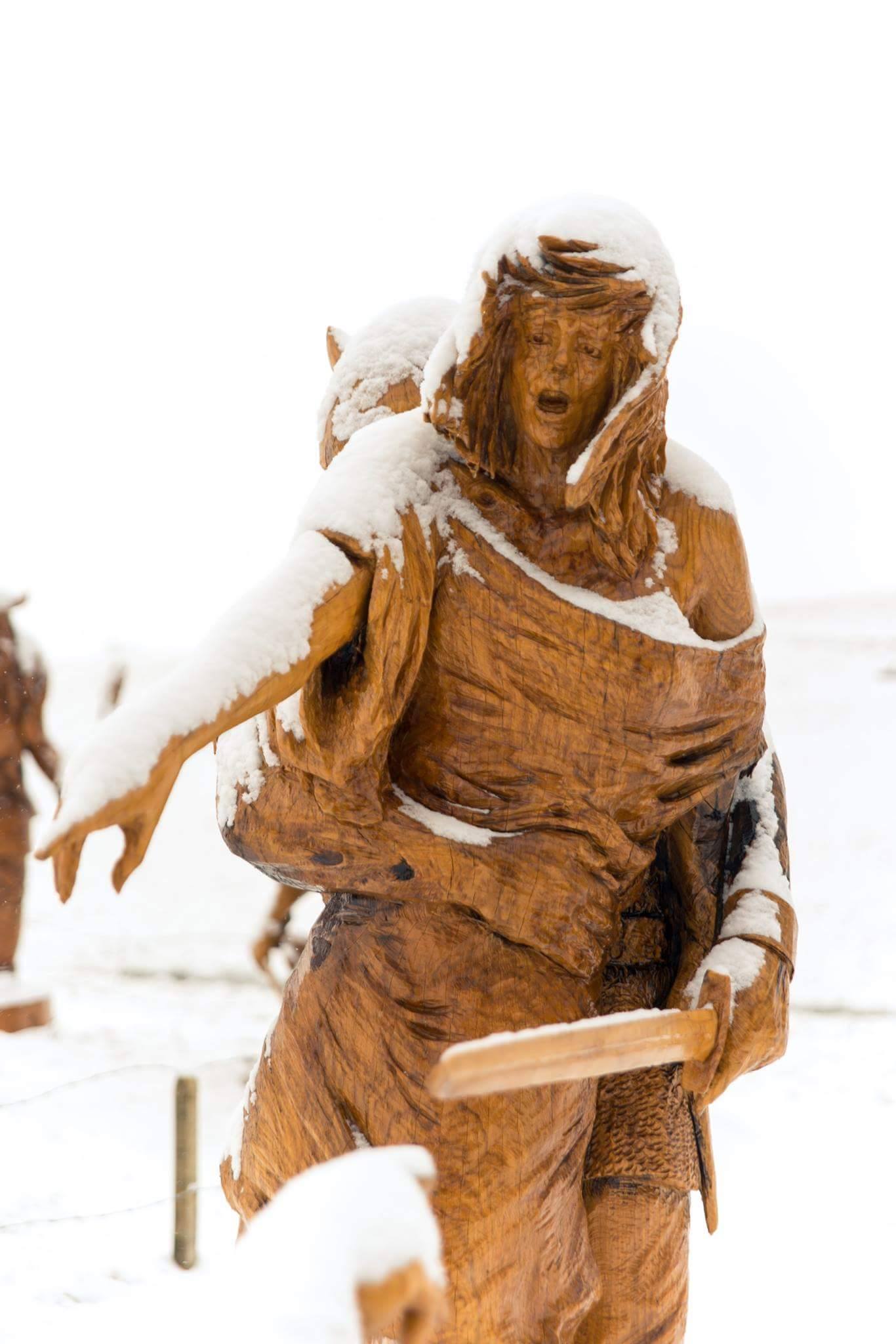 Sculptures in the Snow: The Lion Roars

The next of our sculptures in the snow is a bit of a sad story. Vandals damaged the sculpture, and it had to be removed. However, thankfully we have photos like this to remember Simon’s work!
In the summer this lion looked at home in the sun – his natural comfort zone. And now, in winter – like the Viking Raid – he tells a different story. He still looks majestic and makes a striking contrast with the snow. We think Narnia fans are also reminded of Aslan. Although he wasn’t intended to be C S Lewis’ famous lion, it’s a natural connection when you see a powerful lion in a wintery environment! Looking at this sculpture in the snow, it’s easy to imagine Aslan roaring in the Battle of Beruna… 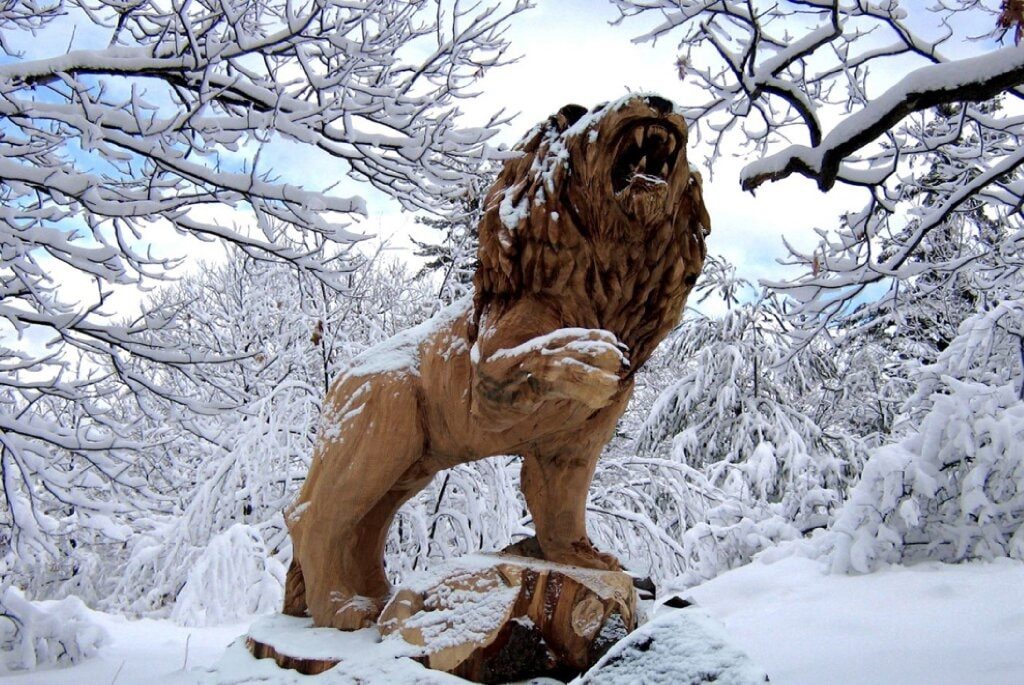 Sculptures in the Snow: The Giant Hand of Vyrnwy

The next of Simon’s sculptures in the snow is one of his most popular: The Giant Hand of Vyrnwy.
The hand depicts the tree’s struggle to live despite the force of the elements and human damage, and this hand reaching upwards is its final attempt to reach the sky. Seeing the hand covered in snow only adds to that sense of struggle as it stands firm throughout the adverse conditions of winter. 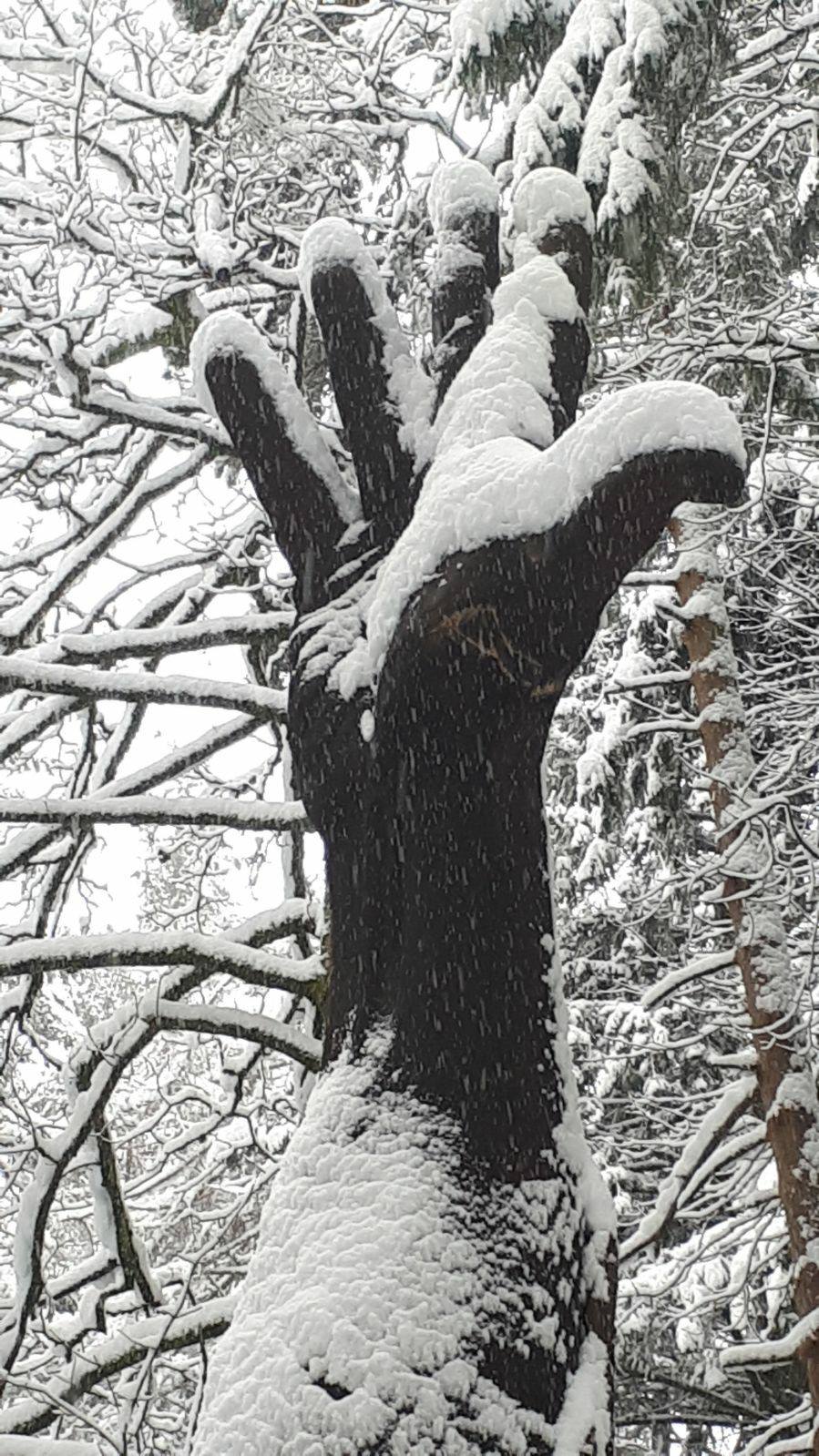 Sculptures in the Snow: Gwyddion the Wizard

This final sculpture was photographed last weekend at Maes y Pant.  Gwyddion stands along one of the accessible trails and draws attention in all seasons. We love how the snow has changed the narrative a little. Where he is holding a bird, it now appears as if he is cradling him and protecting him from the cold. His eyes look tired – perhaps because of living through a cold, harsh winter. His posture has also taken on the sense that he is keeping himself warm in the cold. And again, we are drawn into works of fiction like Lord of the Rings where elderly wizards battle for good over evil.
As with all the other sculptures too, we love how the contrast with the snow seems to enhance the warm tones of the wood. 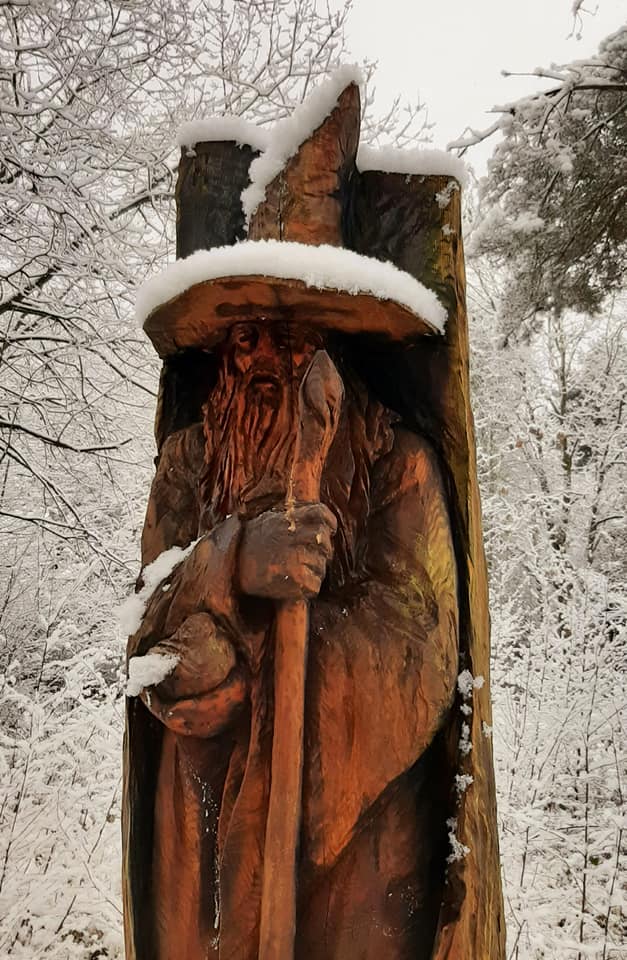 Sculptures in the Snow: Your own Images

Have you seen any of Simon’s sculptures in the snow? If so, we’d love to see your photos! We’d love to hear too how the snow changed the sculpture’s story for you! Just drop your story or photo in the comments, or through any of the usual channels (Facebook, Insta, Twitter). We’re looking forward to hearing from you!

If you would like to talk to Simon about your own commission, contact him via the form at www.treecarving.co.uk/contact.

Commissioning the Right Sculpture – Why Some Designs Make the Cut, (!!!!), and Others Don’t!