Queen of the South Legends Unveiled

Back in May we started sharing videos and photos of a statue of three footballers that Simon was working on. Five months later, we’re proud to see the statue of the Queen of the South legends finally installed and unveiled! 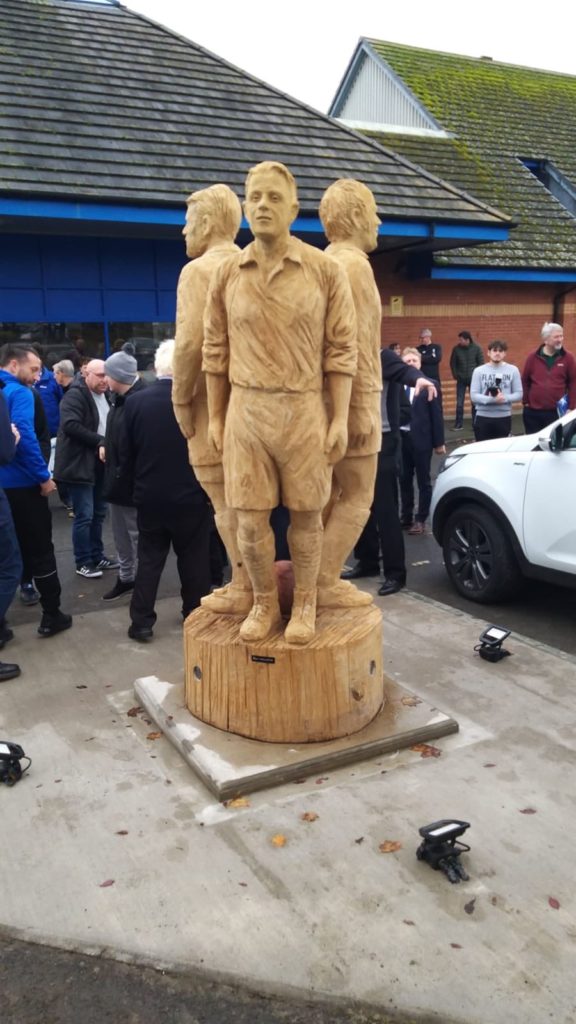 The statue was commissioned by The People’s Project and stands outside the Queen of the South stadium in Dumfries. The People’s Project exists to help rekindle community within Dumfries. It does this through practical projects, funding of community initiatives, and creating opportunities to remind people of the heritage of their town. This statue isn’t their first commission, and they have also restored or commissioned statues of Robert De Bruce, and Peter Pan.

This particular commission commemorates three of the legends of Queen of the South FC: Billy Houliston, Alan Ball, and Stephen Dobbie. Each player represents a different era, achievement and contribution to the club. To find out more about each player, visit http://www.qosfc.com/news-4765. We think it’s always inspiring to read about passion t,alent and dedication, even if football may not be your thing! 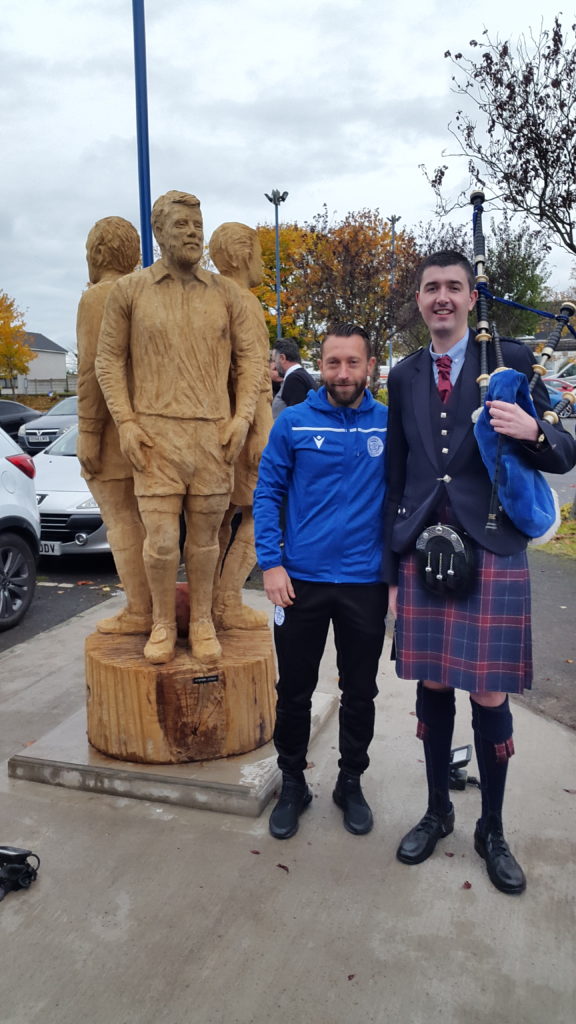 Current player Stephen Dobbie with his likeness at the unveiling

This statue was always going to be a challenge. The original goal was to make the three life-sized players out of one piece of oak:

About to begin a project that will be a big challenge… And for once it isn't a dragon!!Three life size footballers in one log…

If you watched the video, you would have seen Simon refer to a crack throughout the timber. That obviously meant he had to react immediately, and think about how to work with and around that crack. In the beginning this seemed to have a simple solution. Just turn the trunk upside down!

In addition though, he had to think not only about what that crack is like in the moment, but what would happen in years to come. It turned out that when he considered the Scottish weather, that crack was going to create some problems. Simon ended up having to cut out one player, and use a second piece of timber, as you can see in the next video. Every cloud has a silver lining though! Removing that player helped Simon overcome one of the other challenges in a 360° statue – reaching the backs of the other players!

An update on the footballers!! 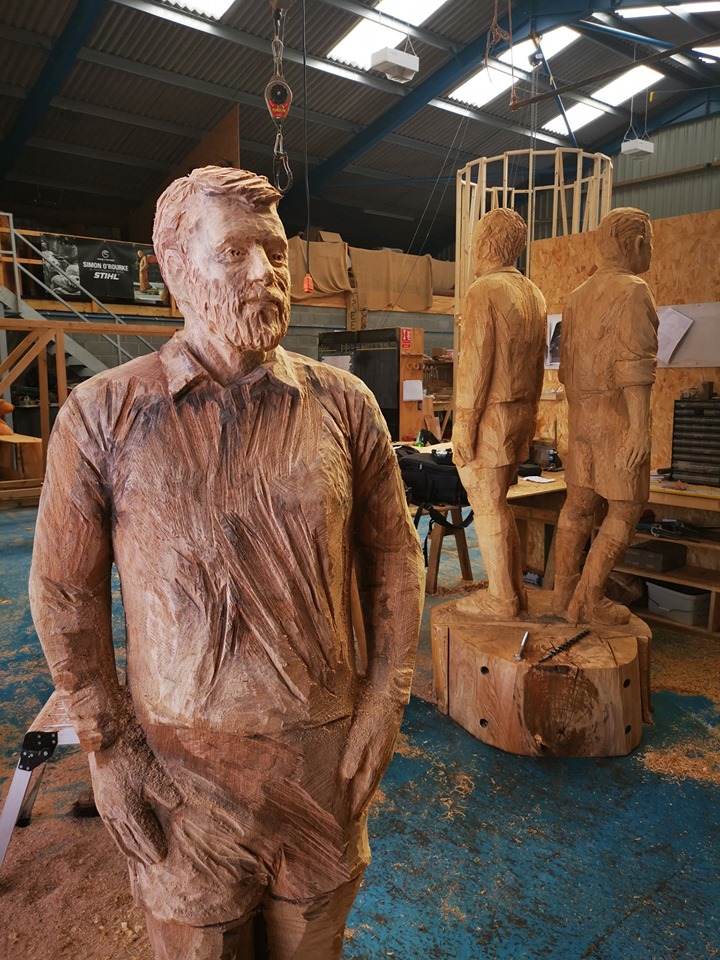 The statue in process after a player had been removed, allowing Simon to access the backs of the other players

As well as technical challenges, there was then the task of creating an accurate likeness. As we’ve mentioned in this blog, this means not only dealing with correct shape and ratio, but also the challenge of depth. In this case too, it also has to be true to life, and there isn’t as much artistic license. Especially in the case of a statue like this where the purpose is to honour people, Simon always wishes to capture them in a way which is accurate and tells a story of who they really are. For those who wonder how possible that is when using power tools, this comparison says it all! 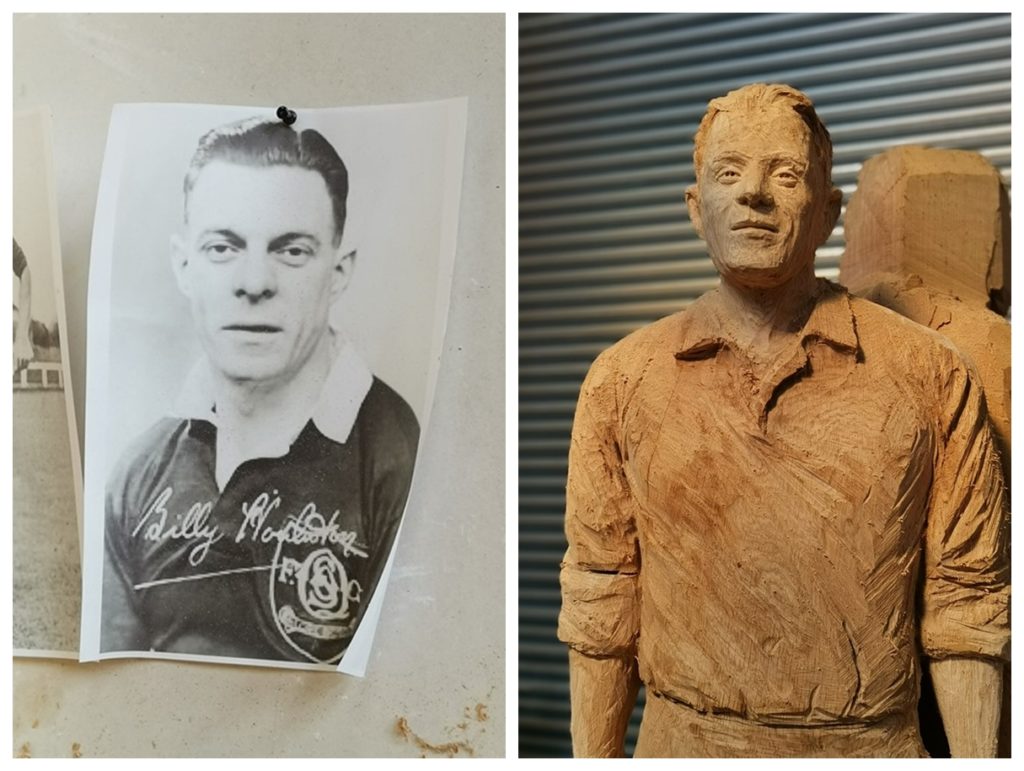 Billy Houliston statue with one of the photos Simon worked from

Creating Community – Not Just a Statue.

Part of the purpose of this statue was to commemorate the Queen of the South legends. It is has a bigger purpose that goes beyond this though.

The reason for commemorating these players is to remind the Dumfries community of their heritage. To remind them of town and community achievements they can be proud of. It reminds them of things they have in common like the love of a sport or a hero. It gives a focus for unity and remembering positive moments in their community. For the younger person looking at these players immortalised in wood, it gives something to aspire to. And for the older generation, it can bring about a sense of nostalgia and ‘the good old days’ that brings joy and encouragement. The kits from the different eras clearly show achievements across the years and history, and so it helps unite generations in a mutual appreciate of their team and its history. 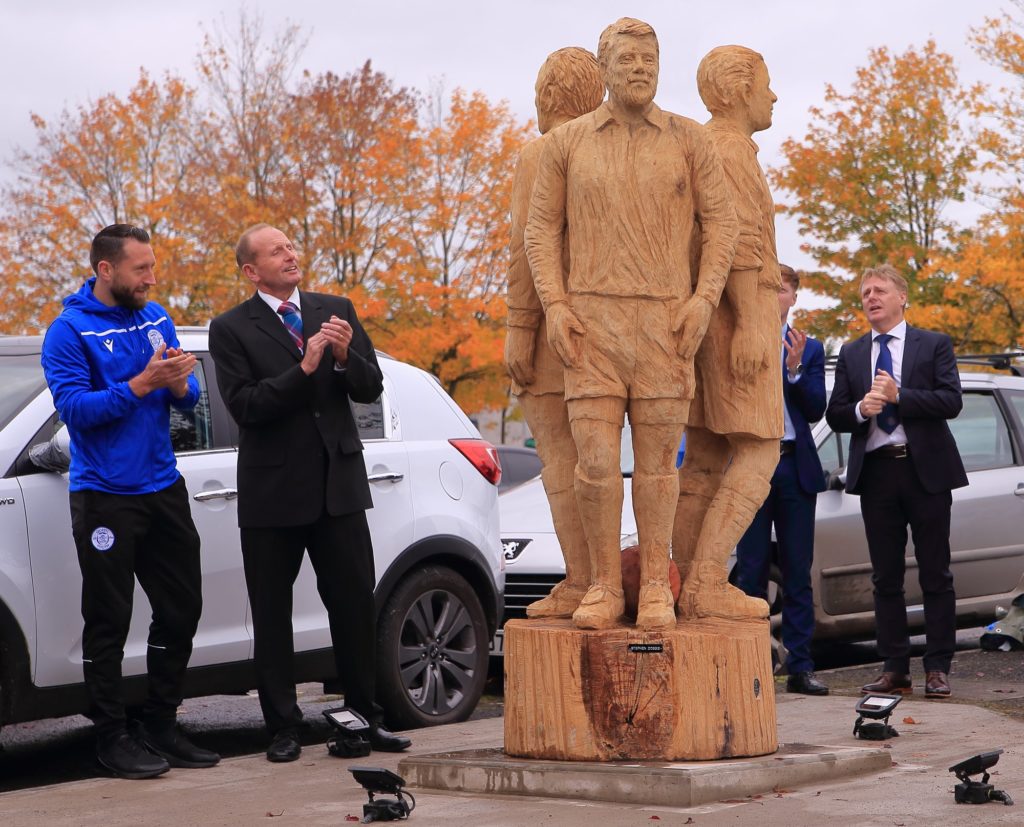 Stephen Dobbie and club officials at the unveiling

And so, statues like this are more than just pieces of art to be admired. They also help unite, inspire, and promote community. Even the simple act of coming together for an unveiling ceremony helps create all these things.

If you are part of a town, club, society or community and would like to explore a similar idea, why not send us a message? As always, Simon is available on [email protected] to talk about your vision, hopes and the practical details.

Teamwork and Character: A Recipe for Success