Last night Simon was on ‘home territory’ as he took part in the annual Victorian Christmas market in Wrexham. Don’t worry though, he hasn’t traded his chainsaw for a stall and money pouch! Simon’s contribution to the evening was much cooler, if we do say so ourselves. He swapped timber for something much wetter, and did some ice carving for Wrexham Museum. 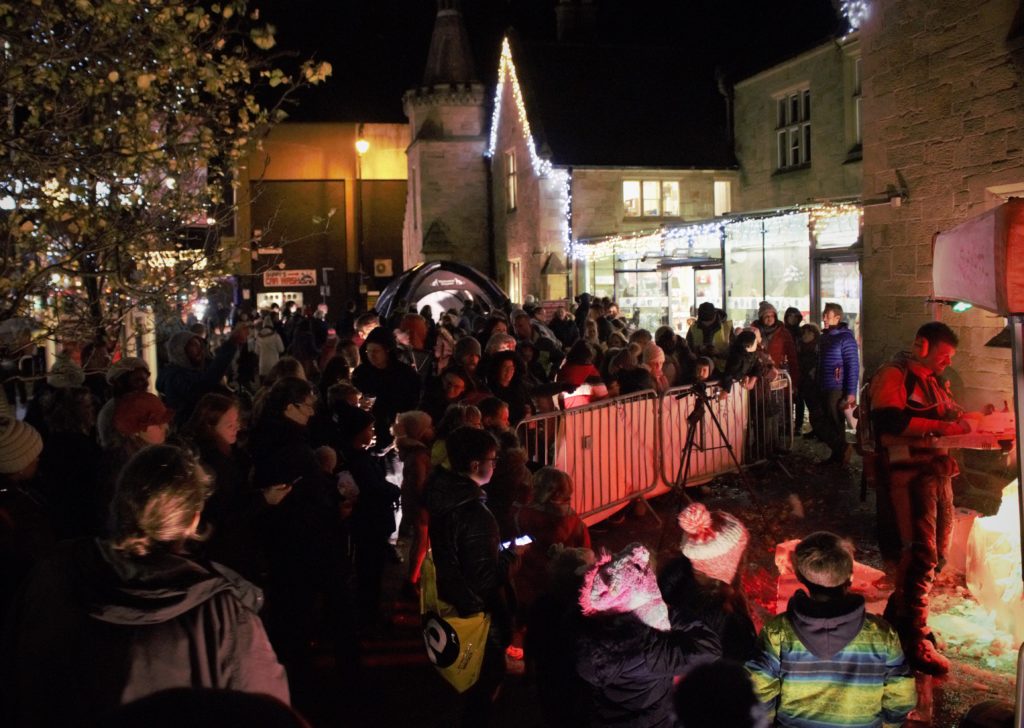 About the Victorian Market

Wrexham’s Christmas Market has become one of the most eagerly awaited events in the town’s calendar and successfully attracts thousands of shoppers year after year.  This year there was a Victorian theme to the market with Punch and Judy shows throughout the day, and period street performers. The main feature though was 100 stalls from Queens Square right up to and inside St Giles’ Church. 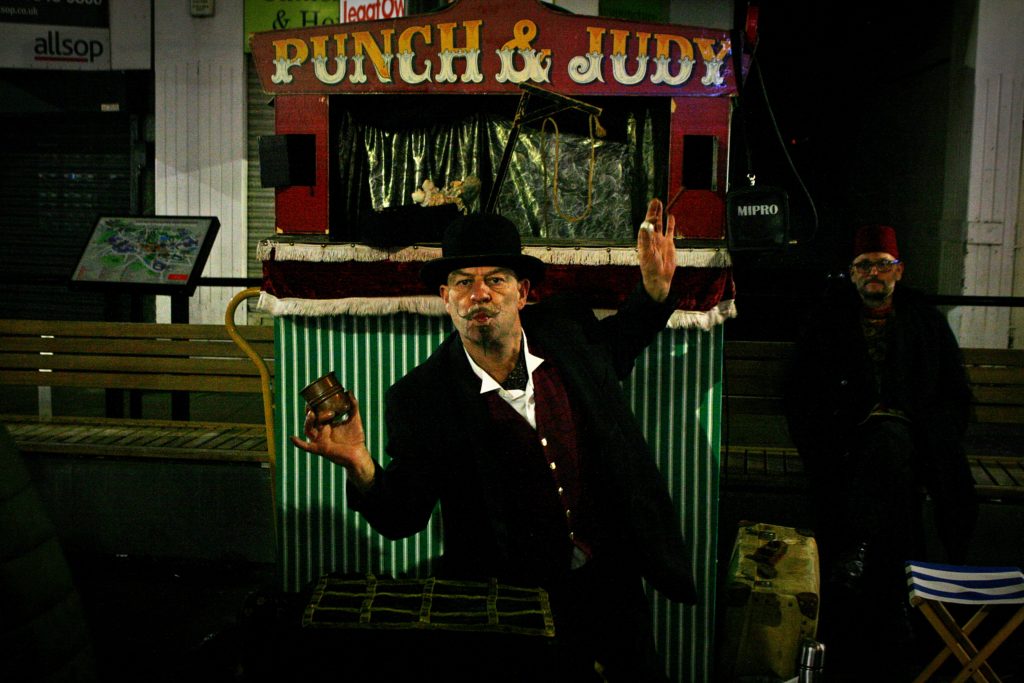 About Ice Carving for Christmas

To coincide with the event, Wrexham Museums also organised and hosted an event: Ice Carving for Christmas. As well as Simon’s ice carving, the museum was open for the public and people could do Christmas shopping in the gift shop and enjoy a hot chocolate or mulled wine in the cafe. Various school choirs performed, including Bryn Hafod Primary who sang in both Welsh and English, and Libby and Sign of the Times. As you can see from the first photo we shared, plenty of people came to enjoy the evening. 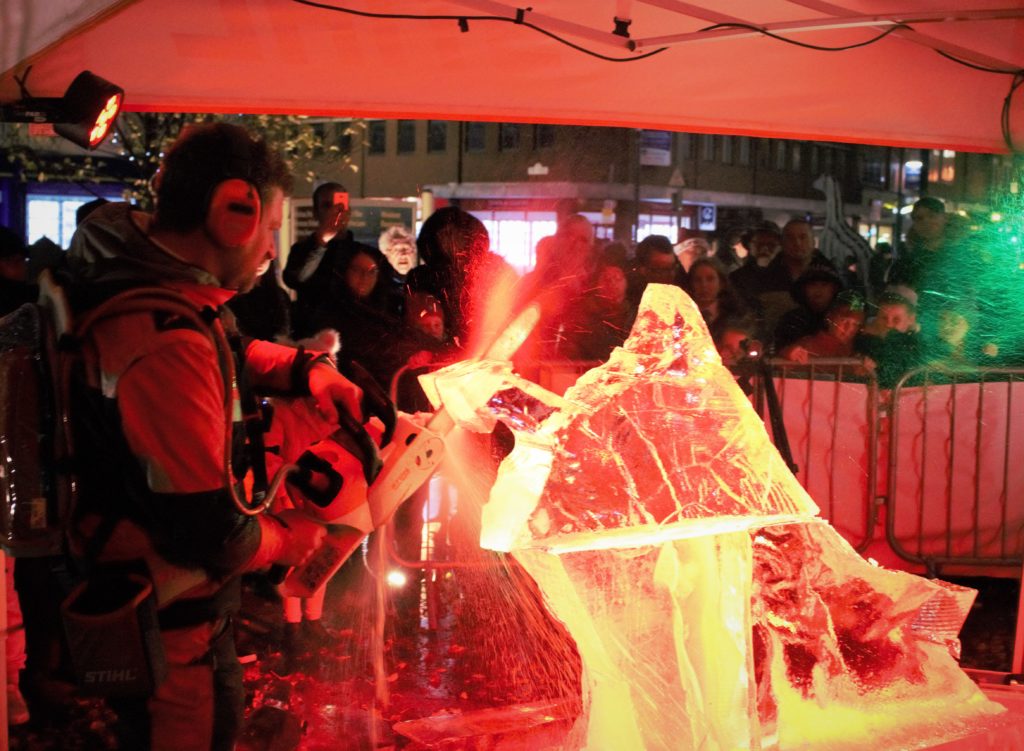 If you read the blog we wrote a couple of weeks ago about the event (visit it here) then you’ll know Simon didn’t just complete one carving. The Ice carving for Wrexham Museum was actually a trail through the town. It began at St Giles church, where most of the market stalls were located, and ended at the Museum.

In the first location, Simon began by carving one block of ice, which was a clue as to what the final ice sculpture would be. People could then follow him to second location where he carved a second block, giving people a second clue.

They could then follow him to the museum where they could submit their guesses as to what his final carving would be, and any correct answers won a prize.

For those who know that 2019 was a year full of dragons for us, it will come as no surprise that the final sculpture was this stunning dragon head.

It lives!! The dragon head, complete with smoke!!

Let us take you back though through the evening as the audience experienced it though…..

Working in the multiple areas gave Simon and Paul the first challenge of the night – getting all the equipment through the thousands of people attending the Victorian Market! They had everything loaded up on a cart, and the high vis jackets definitely helped them get noticed so the crowds could part a little. It definitely wasn’t the quickest or easiest transportation of equipment though! 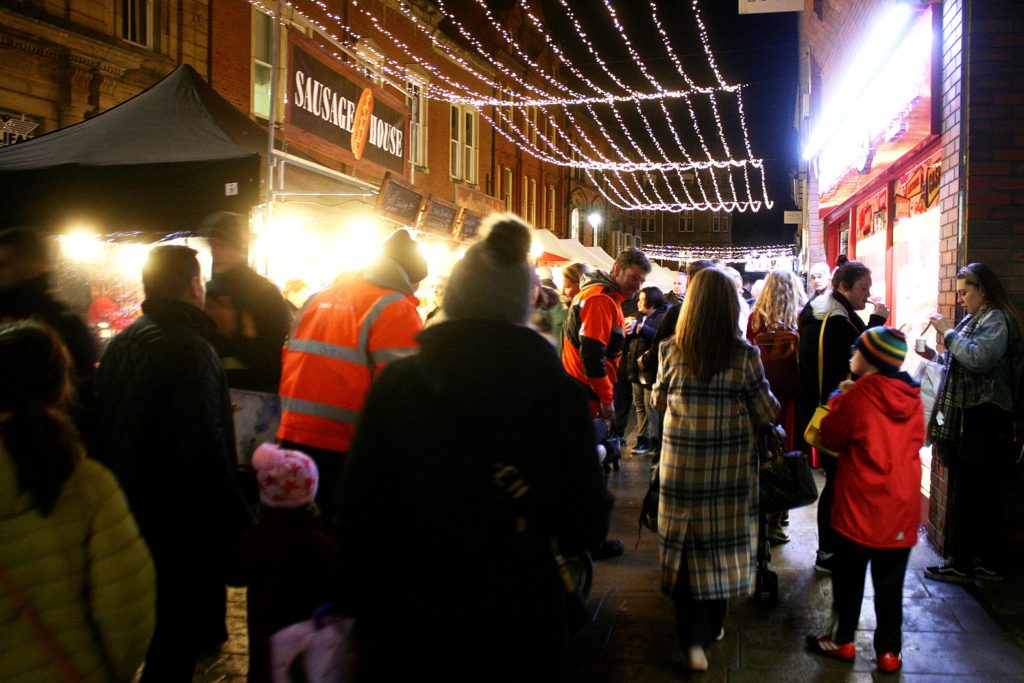 Paul and Simon making their way through the crowds attending the market! 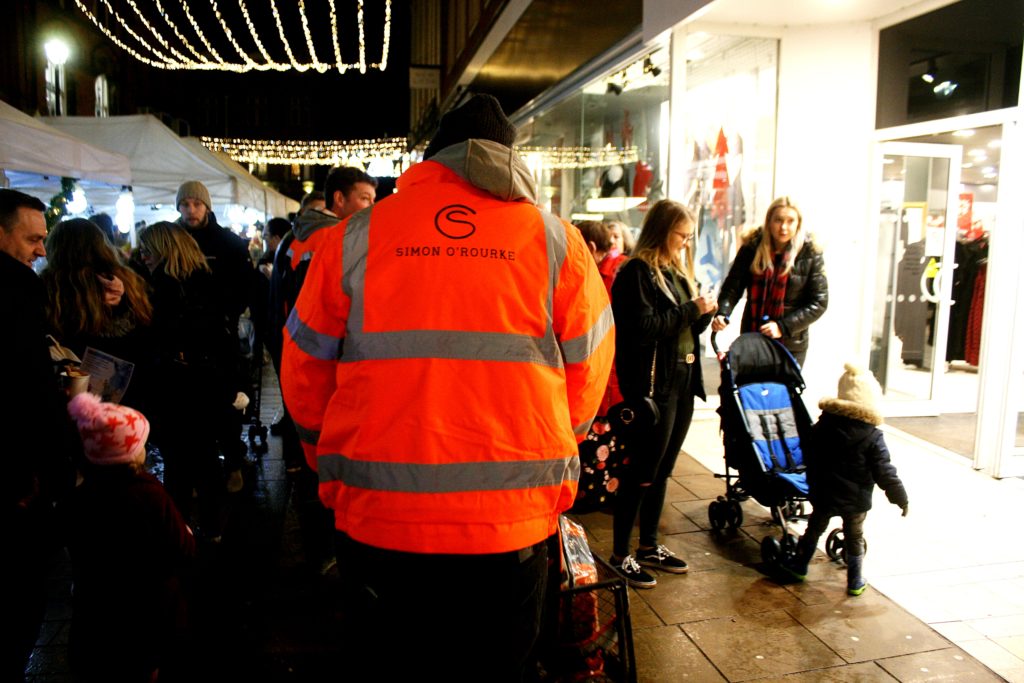 Paul and Simon making their way through the crowds attending the market!

The first location was St Giles church where Simon carved this stunning dragon’s eye. Standing it the crowd, it was fun to be able to hear people’s awe as they watched. Especially as the chain saw went all the way through the ice to carve the space that became the eye! Several people were also commenting on how clear the ice was. Many guessed correctly that we didn’t just freeze water from our hosepipe to make the blocks. Rather, they are especially made for events like this. There’s a science behind it, but you can actually do it at home! Read all about how crystal clear ice is made at Barschool.Net. We’re happiest to leave it to the professionals, but if you try it yourselves, let us know if it works!

As we have said before, it is the lighting that makes the difference when ice carving. This green lighting reflecting off the scales Simon created is definitely eerie and mysterious, which helped add to the sense of mystery and anticipation of what the final carving would be. 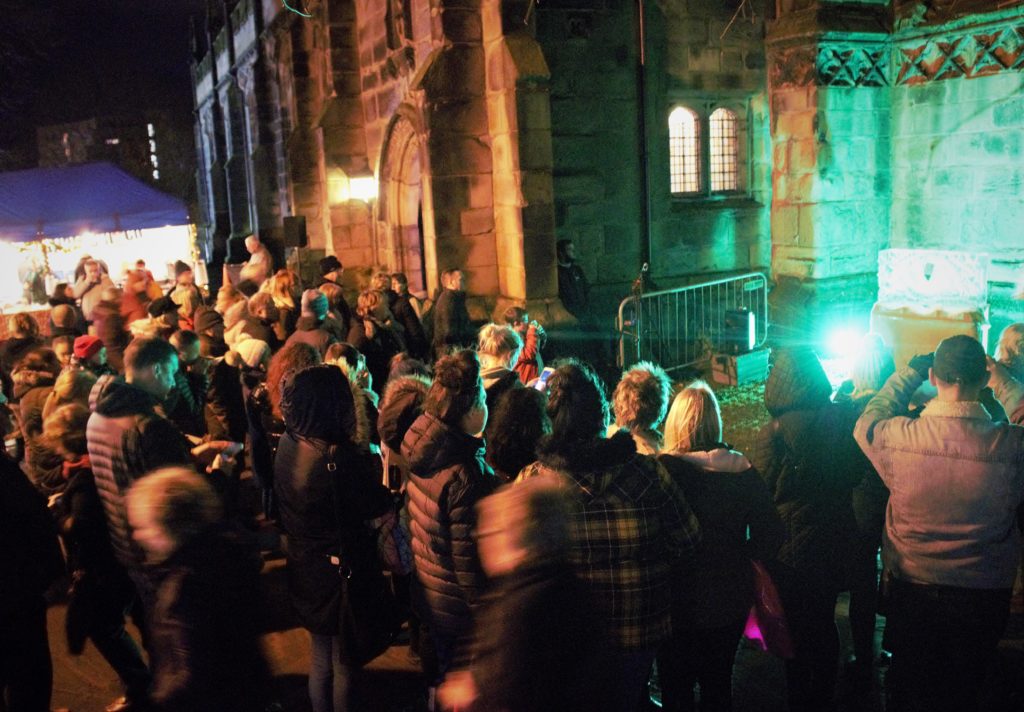 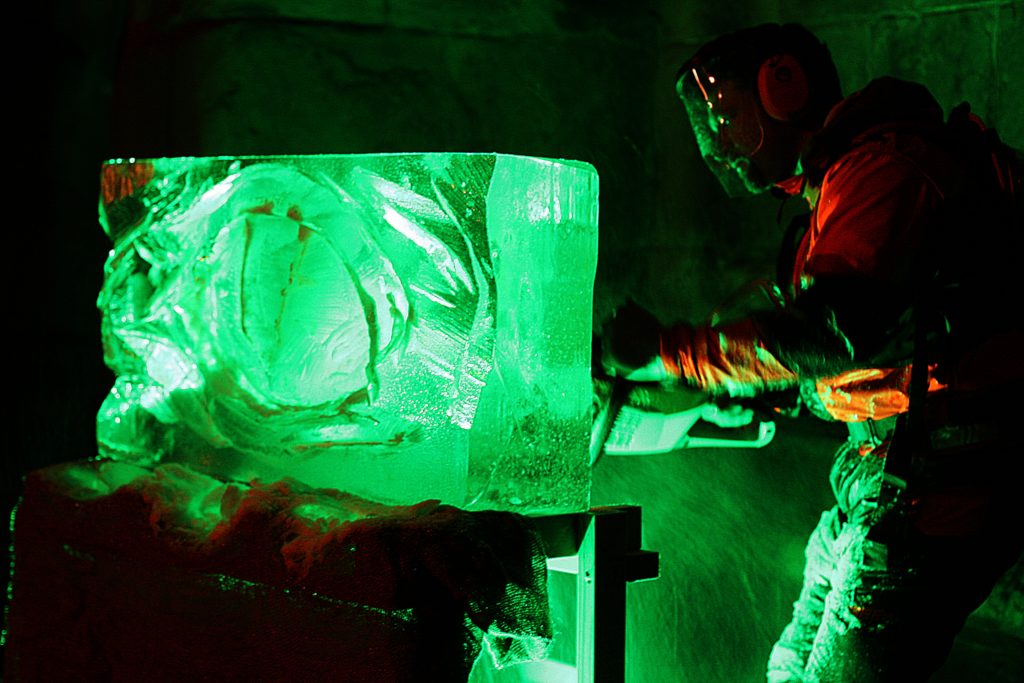 Early on in the work on the dragon’s eye 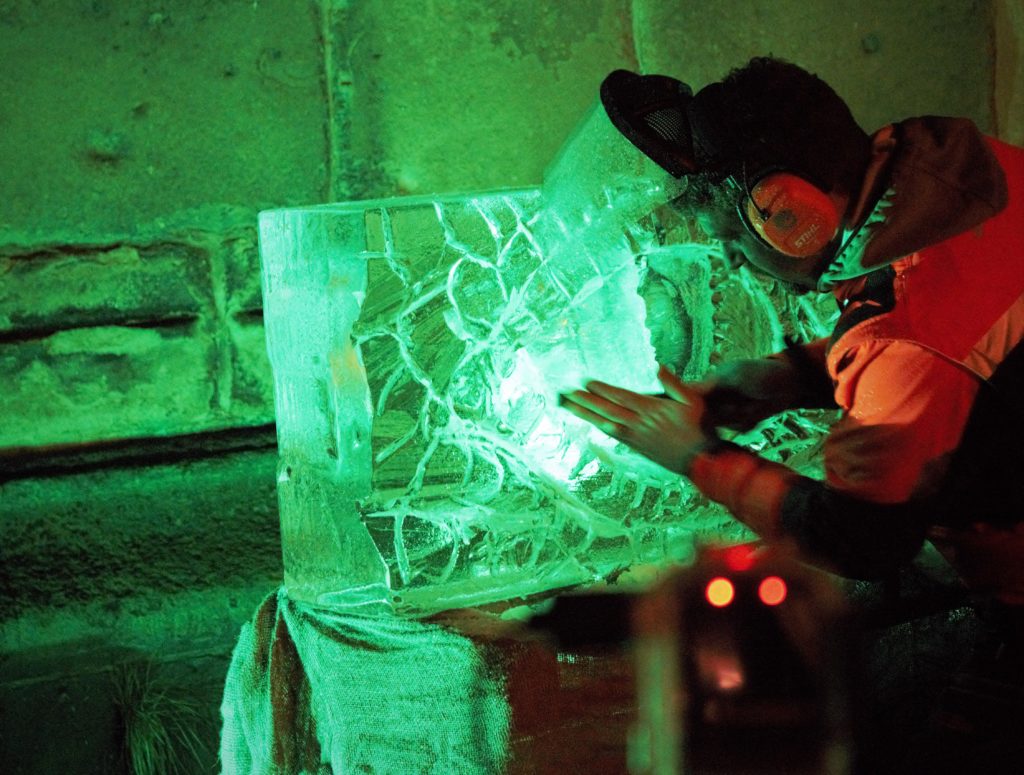 Adding textured to create the scales* 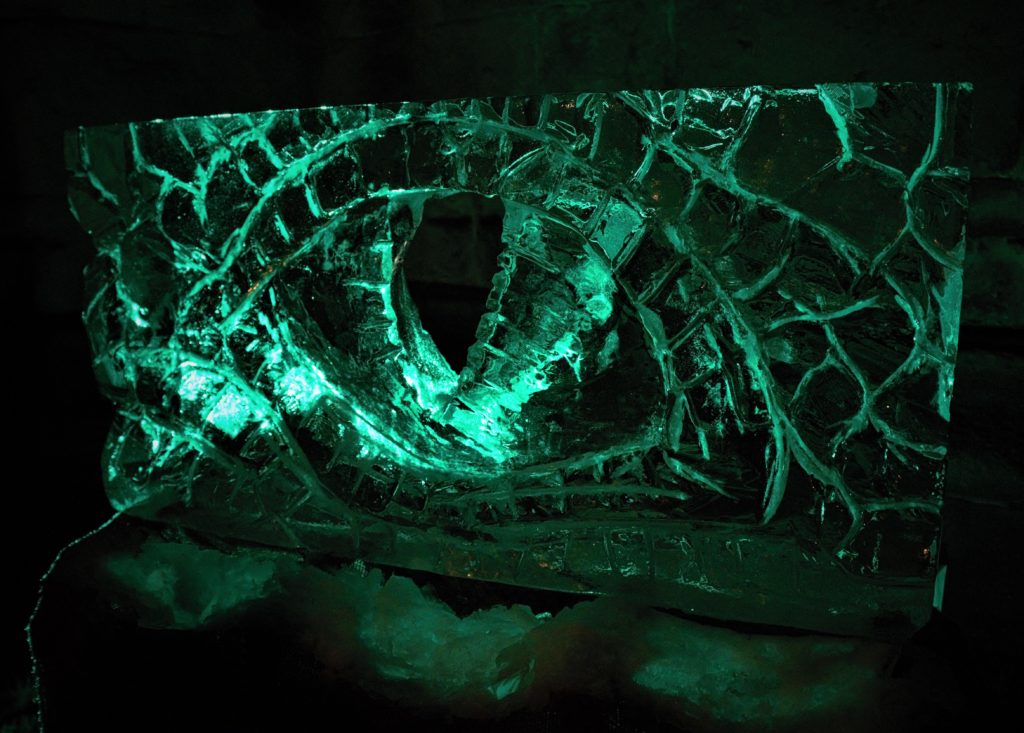 The second location of the night was Henblas Square.
Here, as well as the general admiration of what Simon was doing, I could hear many more questions about the equipment.

“His hands must be freezing” was also a pretty common theme!

Unlike most people were thinking, Simon wasn’t using specialist ‘ice carving’ equipment. He used his faithful Stihl battery powered chainsaws (complete with the handy backpack you will have noticed for the battery packs) for most of the initial carving. This meant they were lightweight and didn’t need a power supply. Perfect for this kind of mobile evening. He also used his Manpa tools angle grinder, with burr bits by Saburrtooth. And, while we’re speaking of Saburrtooth, we’re excited to announce Simon will become one of their ambassadors in 2019!

It was nice to see so many people stay and watch the entire carve here. For a long time people were guessing it was going to be eagles, rather than (as you can see) this amazing dragon claw (clue number two)! It really is fascinating to watch, but the audience were also encouraged to stay by the unusually warm evening. After several nights of hard frost, it was 10°c! Although being a warmer night was helpful for the audience and shoppers, the warmer weather meant Simon had to carve extra fast as the ice was melting far more quickly that he’d hoped! 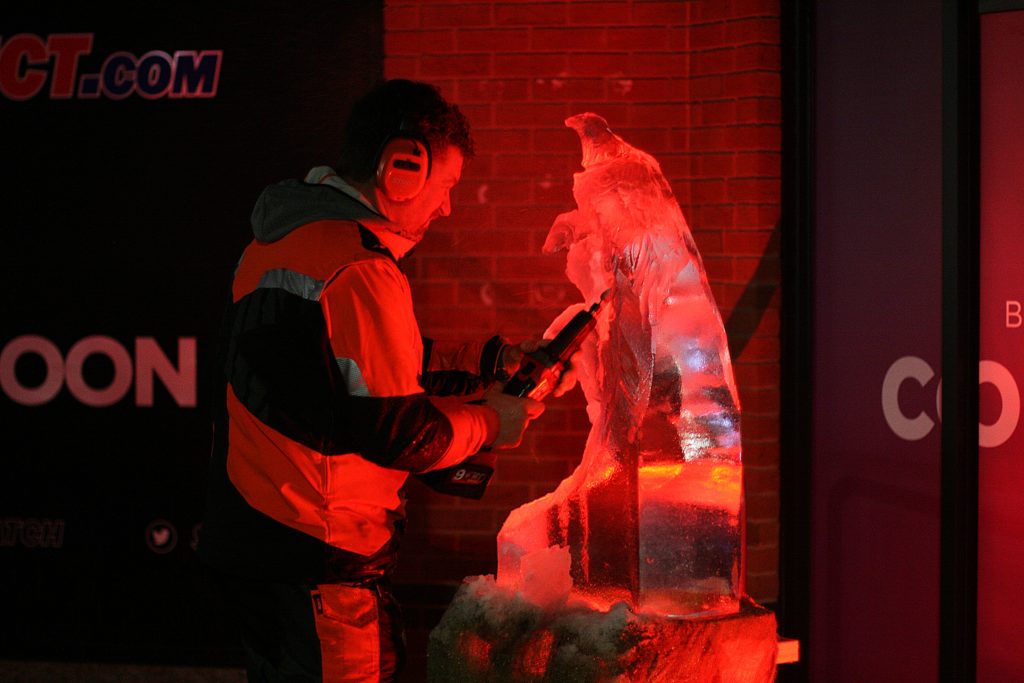 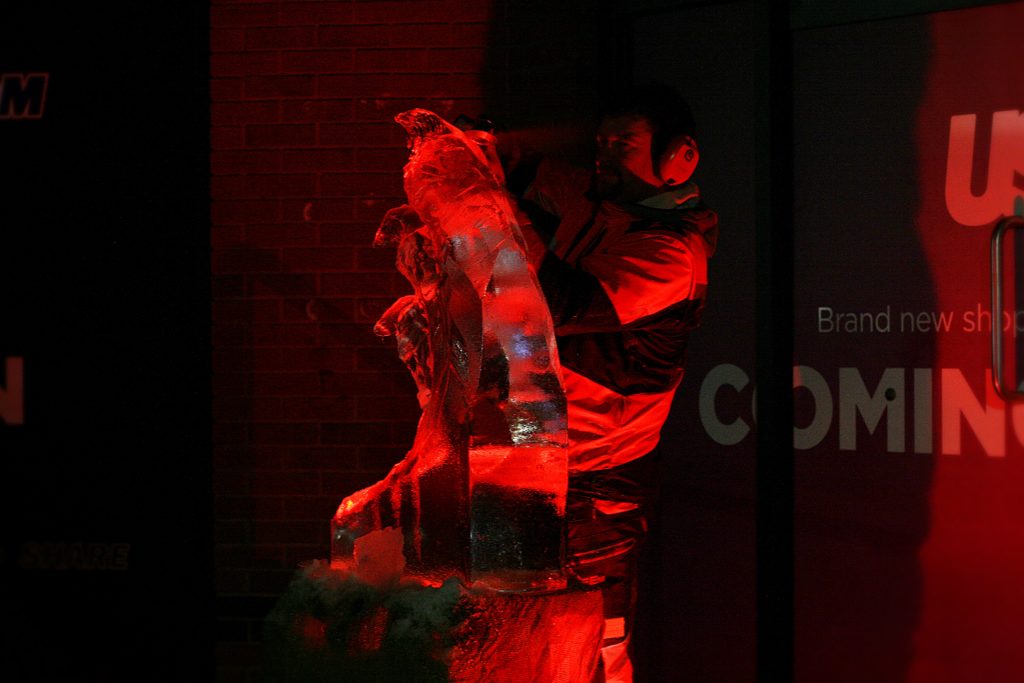 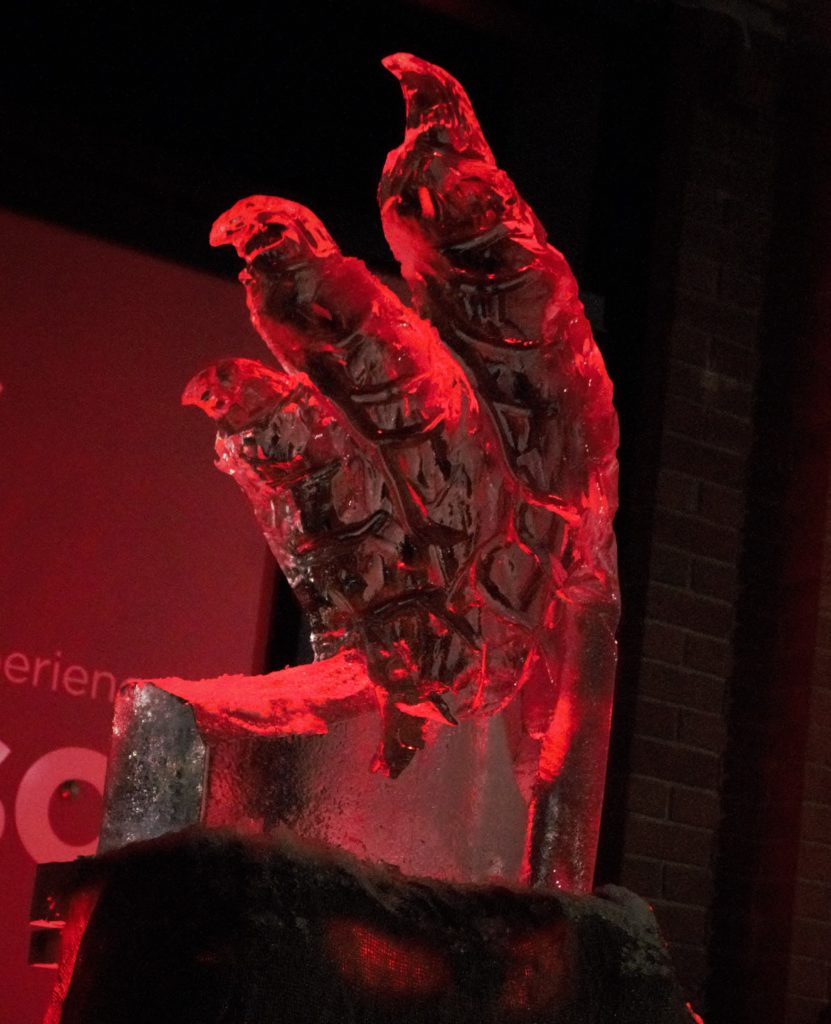 The museum location was the longest of Simon’s carves, and he used six blocks of ice rather than the one that he used at the other locations. Even before he arrived, people were fascinated by the ice on the museum forecourt. 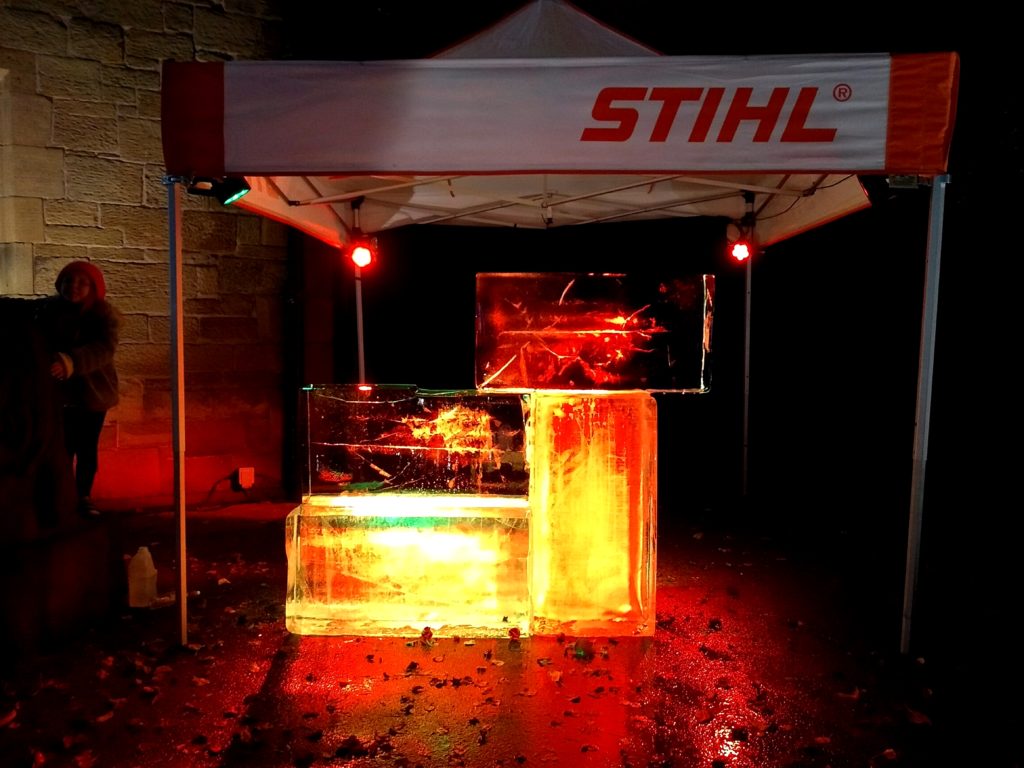 Blocks of ice waiting for carving!

Simon was challenged here not only by the ice melting in the warmer weather, but also an impressive wind. At one point the leaves spiraling in the air looked like a scene from The Wizard of Oz! It didn’t put people off watching though, and in some cases it was hard for parents to pry their children away. 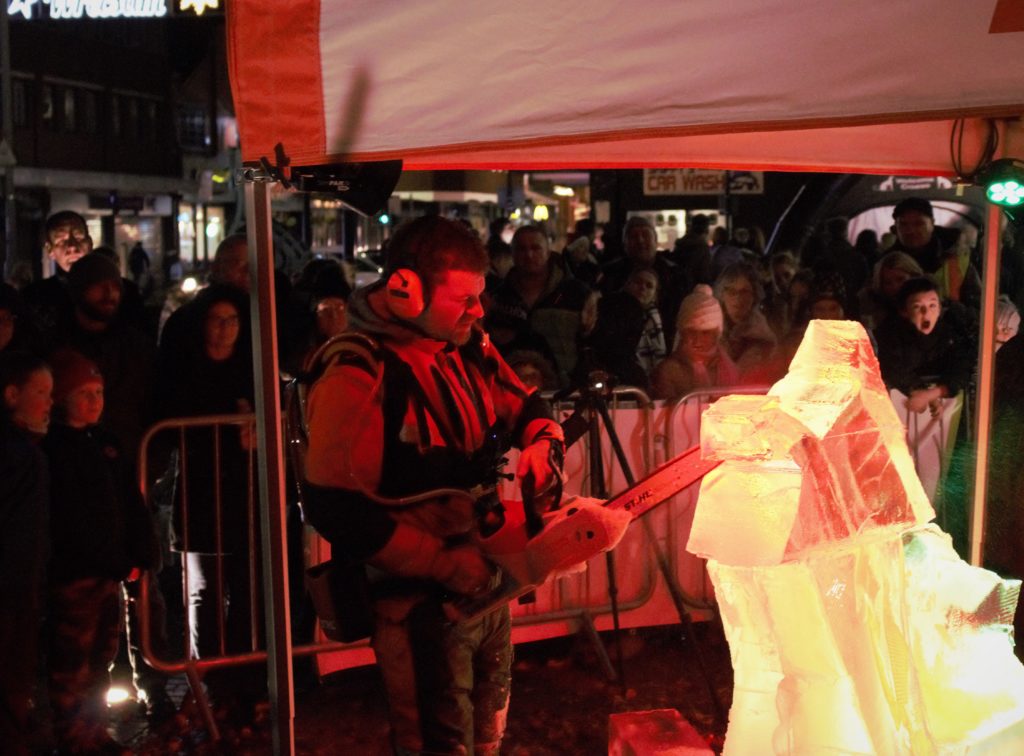 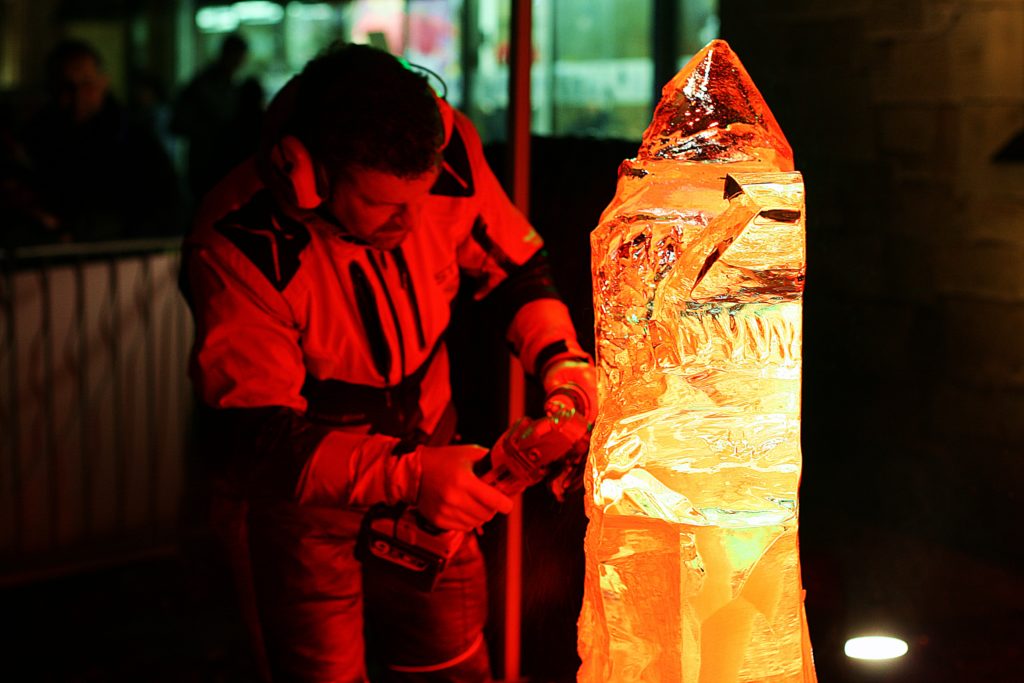 Adding texture with an angle grinder 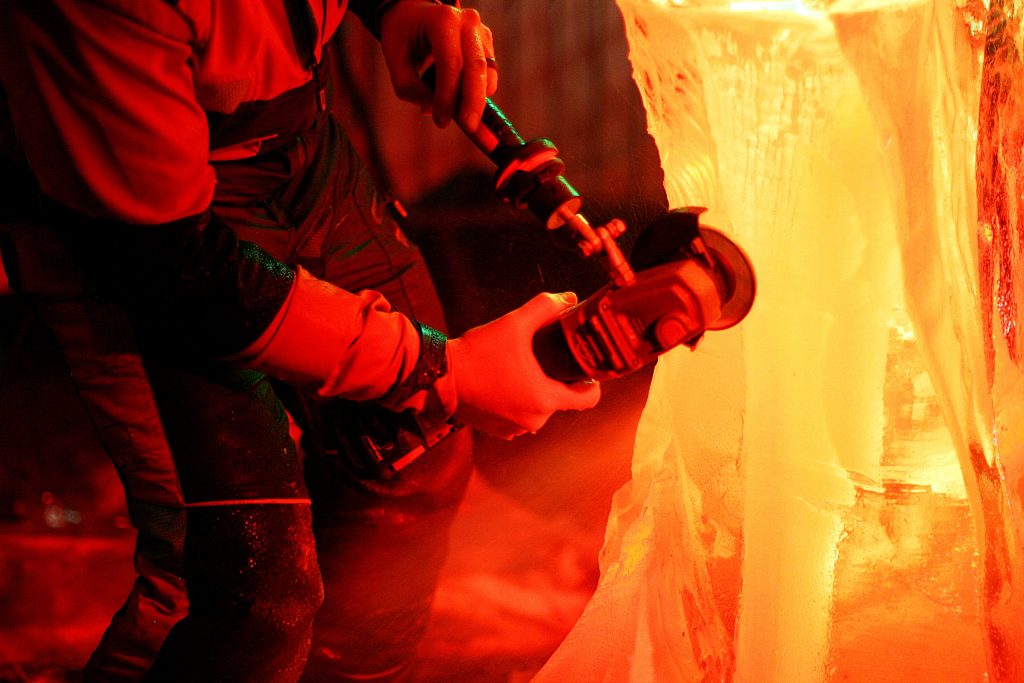 Adding detail to the dragon

One of the perks of Simon being on ‘home turf’ is being able to watch him. Another is being able to hear and see other people’s reactions. The audiences at all the locations were a mix of people who have followed Simon and his work for years, and others who had never even imagined creating something with a chainsaw!

“The precision is unbelievable”

“I’ve never seen anything like it before. It’s bold and beautiful”

“I was only going to stay ten minutes but once I started watching, I had to stay until the end”

“The detail is unbelievable”

We can’t help but agree! The lighting bouncing off the textured scales and the smoke  just made it perfect. Even still in process, it looked spectacular in the light. 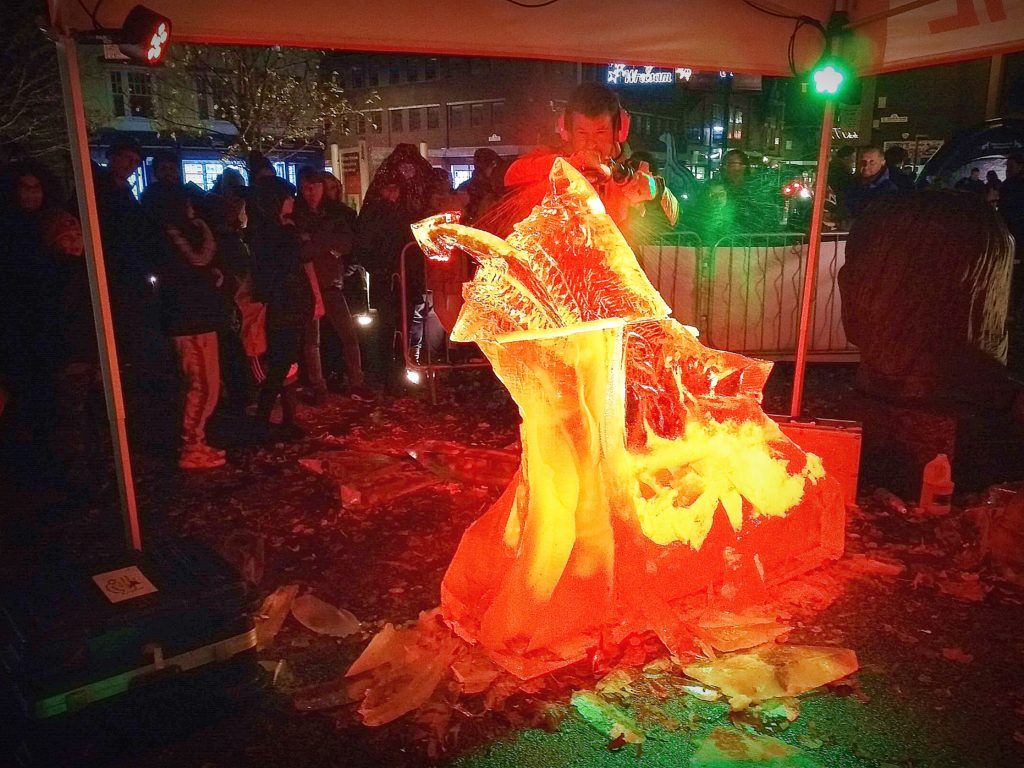 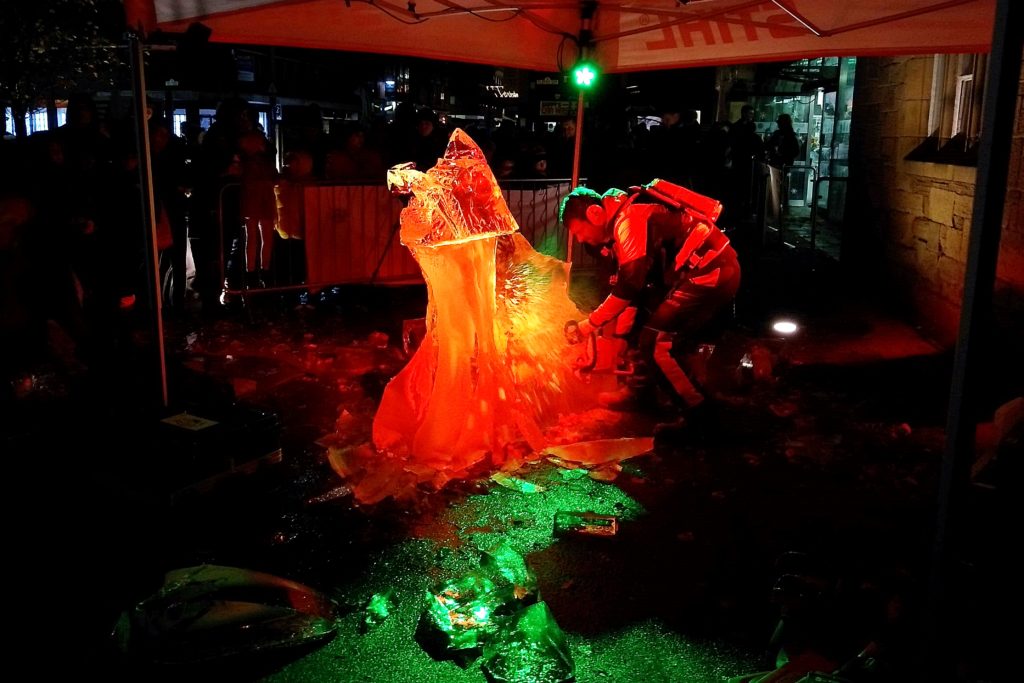 Thank you to Wrexham Museums for organising and hosting the event so well (and for the mulled wine the staff not wielding chainsaws enjoyed!). Thank you too to Shaine Bailey and Treetech for sponsoring the event. And to everybody who came and watched, shared on social media, and complimented Simon on his work. It’s lovely to be able to meet people, and to have such a lovely and encouraging audience. It’s also great to finish our year as it began, with a dragon that captured the attention and hearts of the people who saw it (read about the first dragon, Y Ddraig Derw here).

And so, we leave you with the finished piece for 2019’s Ice Carving for Christmas*: 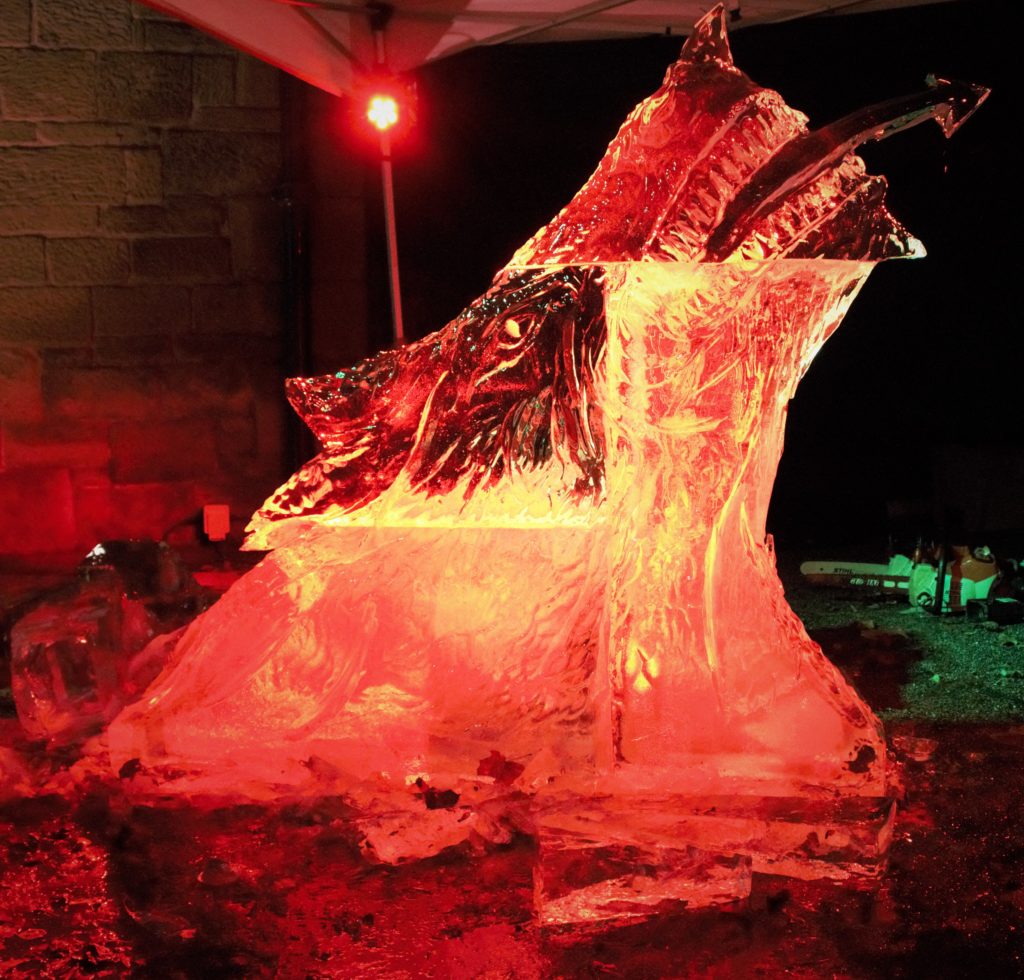 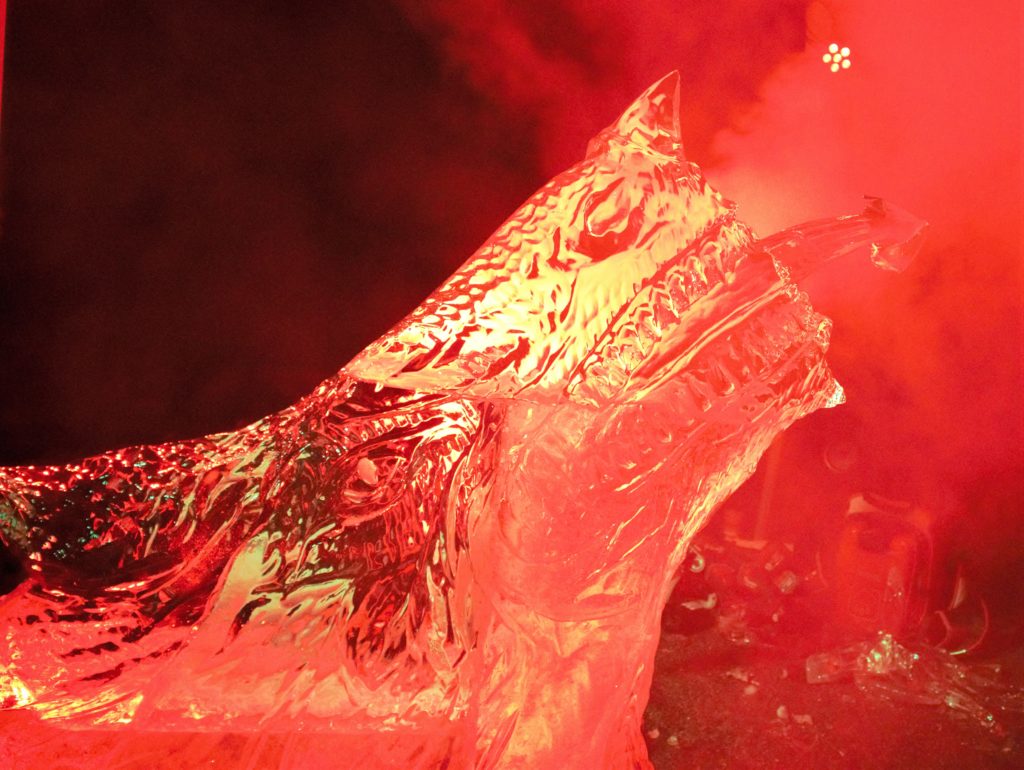 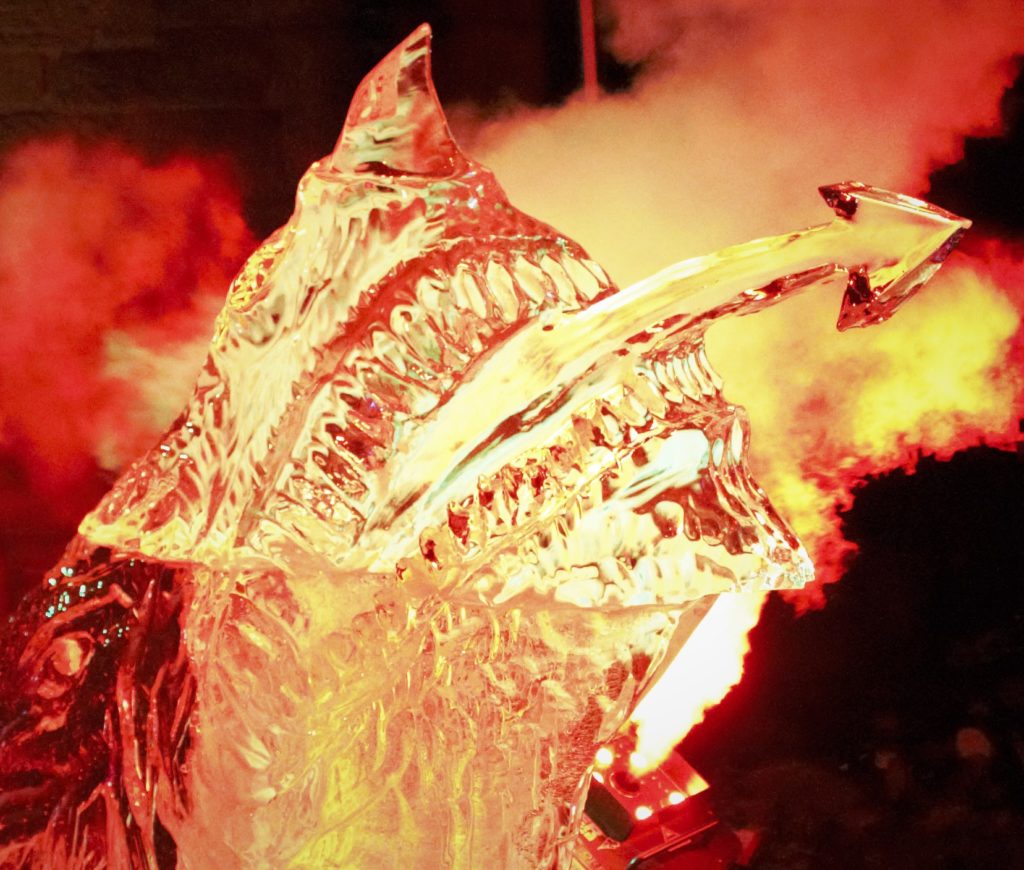 If you would like to book Simon for your event (ice or timber!) email us on [email protected] to talk about details.