No, our blog title doesn’t refer to the movie released this weekend. We mean the real life setting for the series and movie: Highclere Castle. The castle is part of Lady and Lord Carnavon’s estate and is located in Hampshire, over 200 miles from the fictional setting. But for the fans of the series who enjoy a good tear-jerker, today’s blog about visiting the Highclere Castle Airman is just as good!

You may remember that last year Simon and Dan worked on a memorial for the Highclere Estate. For those who need a refresher, the project was a sculpture of a WWII airman and a series of benches that were unveiled at the Highclere Heroes weekend. They were made as a tribute to the airmen who lost their lives in the eight plane crashes that occurred there during WWII.  The benches even featured actual wreckage from one of the B17s that crashed on the estate. This weekend Simon and Liz had the privilege of visiting to see how the Highclere Castle airman is doing.

Keep reading to find out what that entails for Simon, but also a wonderful ‘plot twist’! 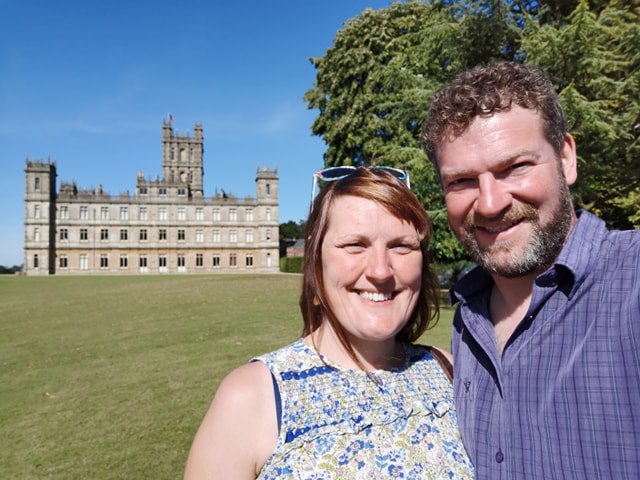 Simon and Liz at Highclere 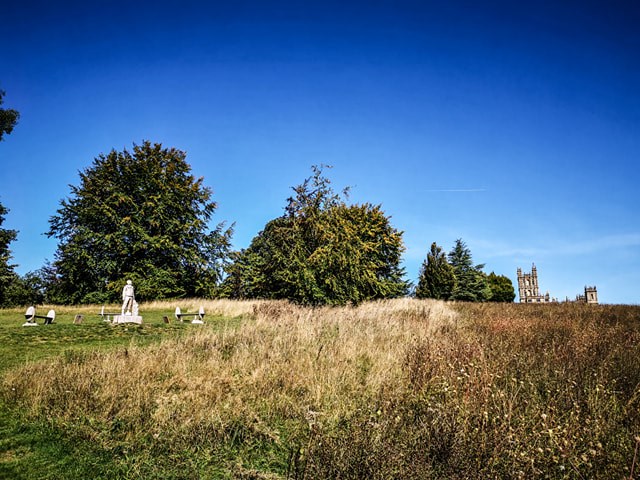 The beautiful setting for the airman and benches

Simon looks out for a few things when checking on a sculpture. One is obviously any damage that needs repairing. Thankfully there is no damage to either the airman or benches. That is, except for the inevitable bird deposits! He also reports that the Sculpture is weathering nicely. It’s already turned a lovely silvery grey colour, which was the intention.
When Simon re-visits a sculpture, he also looks at where the wood has opened up. When he is carving, he has to calculate where cracks will appear as it ages, and take this into account. Using wood in the right way can ensures it doesn’t split across the face or important parts of the sculpture as the wood dries. Again, thankfully all is well! 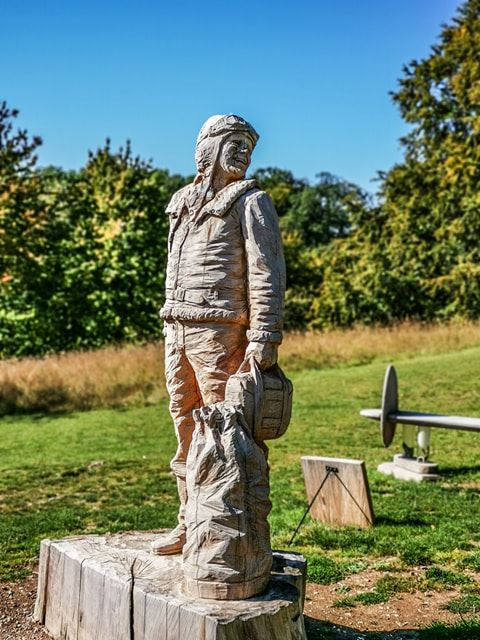 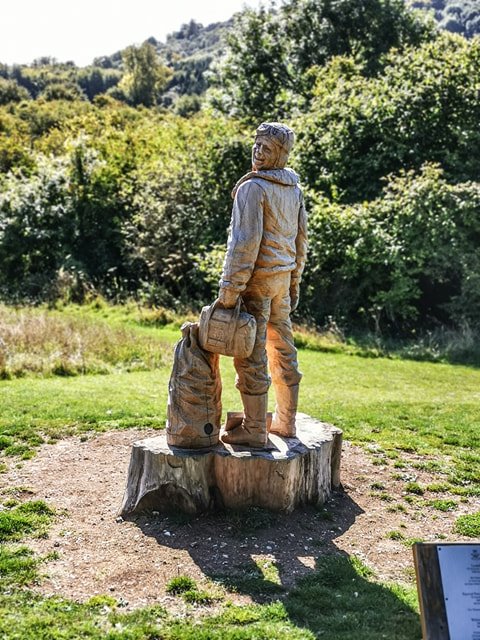 Reflecting on the project

The estate is a beautiful place to  enjoy the British countryside, and the Highclere Castle Airman is located in a particularly tranquil spot. As Simon and Liz were able to sit and enjoy both countryside and sculpture, they took some time to reflect on the project.

The O’Rourkes still feel extremely honoured to have been involved in this memorial. They hope that people will be able to enjoy the sculpture and benches in this setting for years to come. They’re also still extremely grateful to Lord and lady Carnarvon for commissioning Simon and Dan, and for their hospitality to them. As at the original unveiling,  it was very moving for them to be in a place so many sacrificed their lives for others, and to be part of a project that makes that history a visible and ‘living memory’ for others.

Simon, Liz and Dan weren’t the only ones moved by this lovely tribute commissioned by Lady Carnarvon. Several news outlets picked up on the sculpture, but also some of the stories behind it. The BBC article focused on the story of Len Nitti; a serviceman who miraculously survived a crash. The Daily Post focused on the project itself, as does the Daily Mail who also reflect on how the commission was an example of life and art imitating each other, and mirrored the final scenes of Downton Abbey. 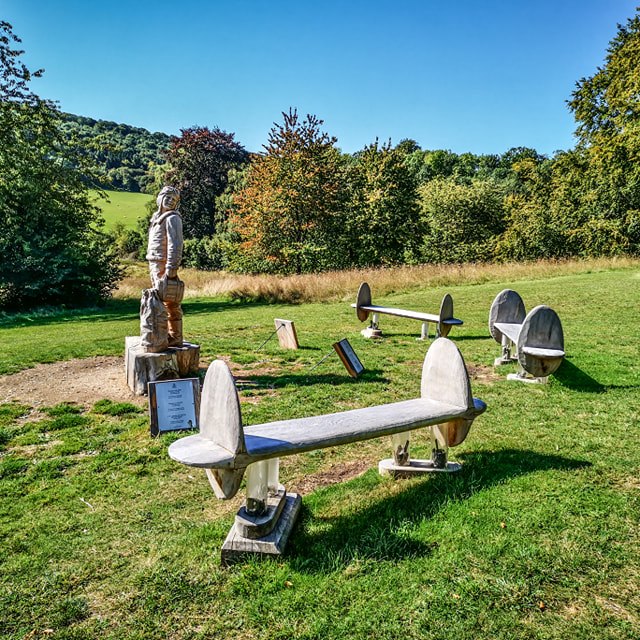 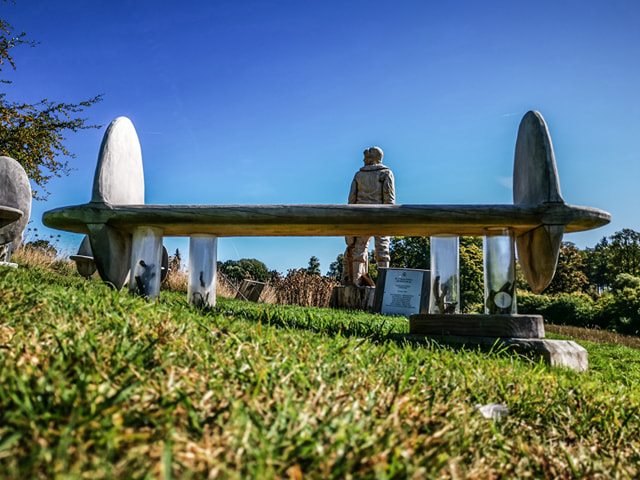 And now for that beautiful plot twist!

Simon and Liz met with families of the airmen who lost their lives as part of the project – a very meaningful part of the Highclere Castle Airman story for them. So much so in fact, they are still in touch with one of the families today. There was one family that they didn’t get to meet at the time though. The family of William Dutton were the only family who were unable to make the unveiling weekend last year. 2nd Lt Dutton died on May 5th 1945 in the B17 Flying Fortress. In fact, it’s parts from his plane that are in the bench legs!
Life is full of surprises though. Completely unexpectedly,  Simon and Liz got to meet Nancy Dutton Sanders this weekend – William Dutton’s sister! 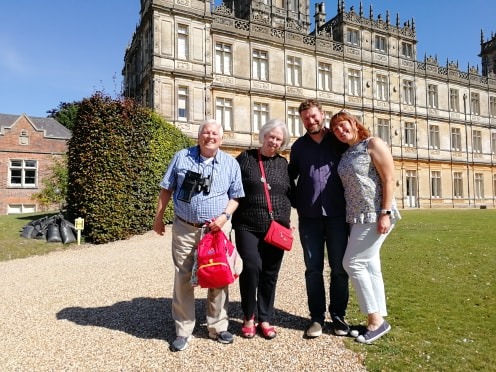 It added a poignancy and beauty to the visit. As always, meeting the ‘real life people’ behind the stories, makes all of us feel afresh a thankfulness for those who fought in wars for our freedom. For Simon and Liz, meeting families and seeing how much it means to them to have their loved ones honoured, is also a privilege and a joy, and adds real purpose to a project. How much more fun when it is totally unexpected!

This really ‘made’ the visit. We only hope that people viewing Highclere on the Big Screen this weekend get as much of a happy ending!