In January 2019 Simon revealed what was one of his most exciting projects at that stage in his career: The Dragon Casket for HBO’s Game of Thrones. We shared about the project at the time in our For the Throne blog. It’s fun to revisit projects though, so this week we revisit the Game of Thrones sculpture, two years on…. 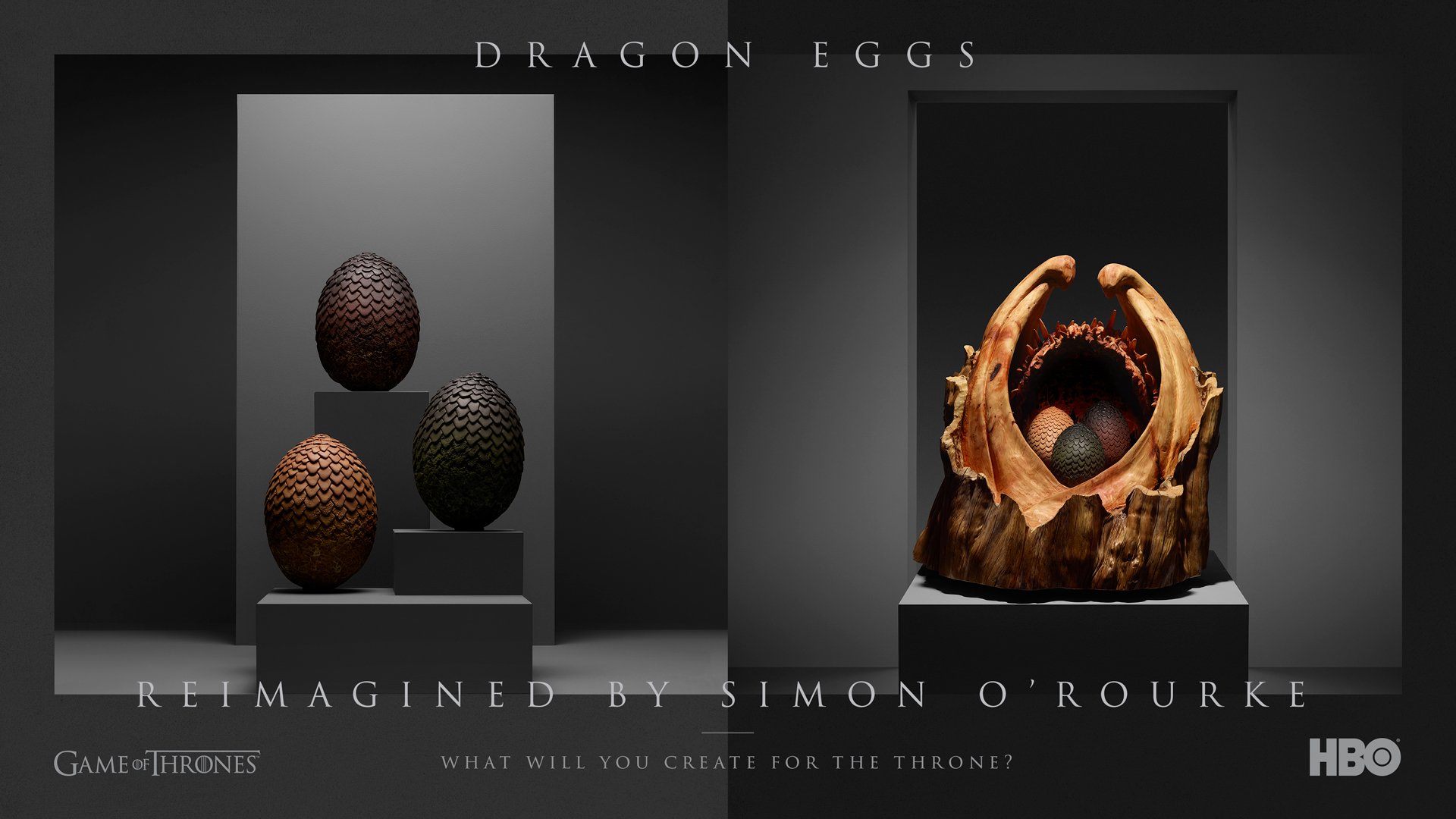 Simon’s Game of Thrones sculpture was part of the advertising for the eighth season of HBO’s hit show Game of Thrones. The company gave select artists from around the world props from the show. Each artist then created something around that prop. Viewers were also invited to share their fan art in a campaign known as #ForTheThrone. Simon received the dragon eggs given to Daenery as a wedding gift, and created a casket to hold them. To see his reaction as he unpacked them, watch the video below…

When Simon created the casket, he had a few practical considerations to take into account. This included the eggs sitting securely, the casket standing without support, and being transportable. As well as being functional, his goal was to also create something that was beautiful and told a story… 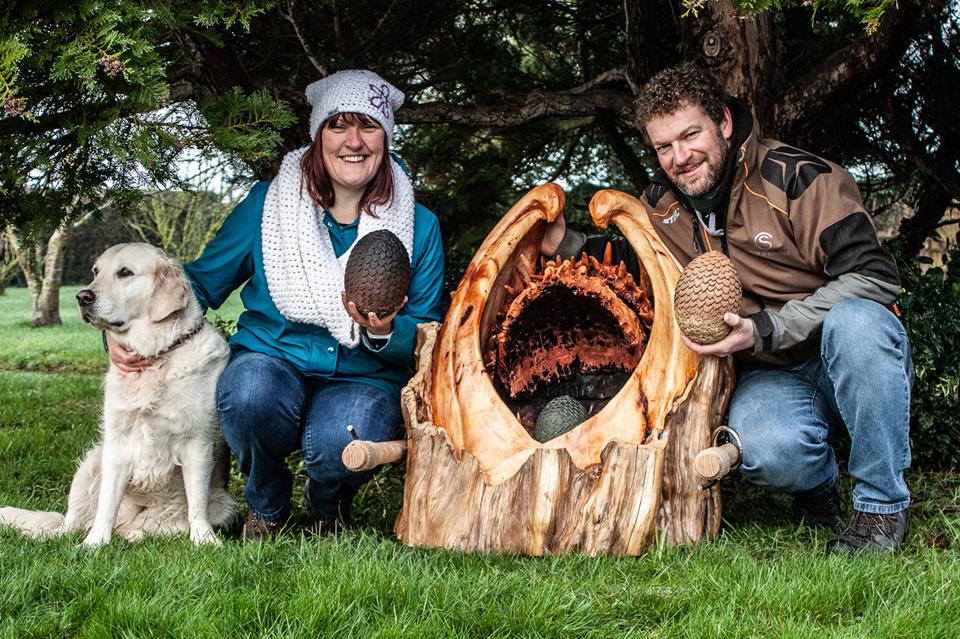 Symbolism in the Sculpture

Simon’s skill and a lovely piece of yew ensured the sculpture was practical, striking and beautiful. There were a few things that Simon did too that created a sense of story…

Viewers know that dragons are an important part of Game of Thrones. Using dragon anatomy in the design (primarily wings, teeth and scaly texture) reflected this – as well as the fact the eggs themselves were dragon eggs. 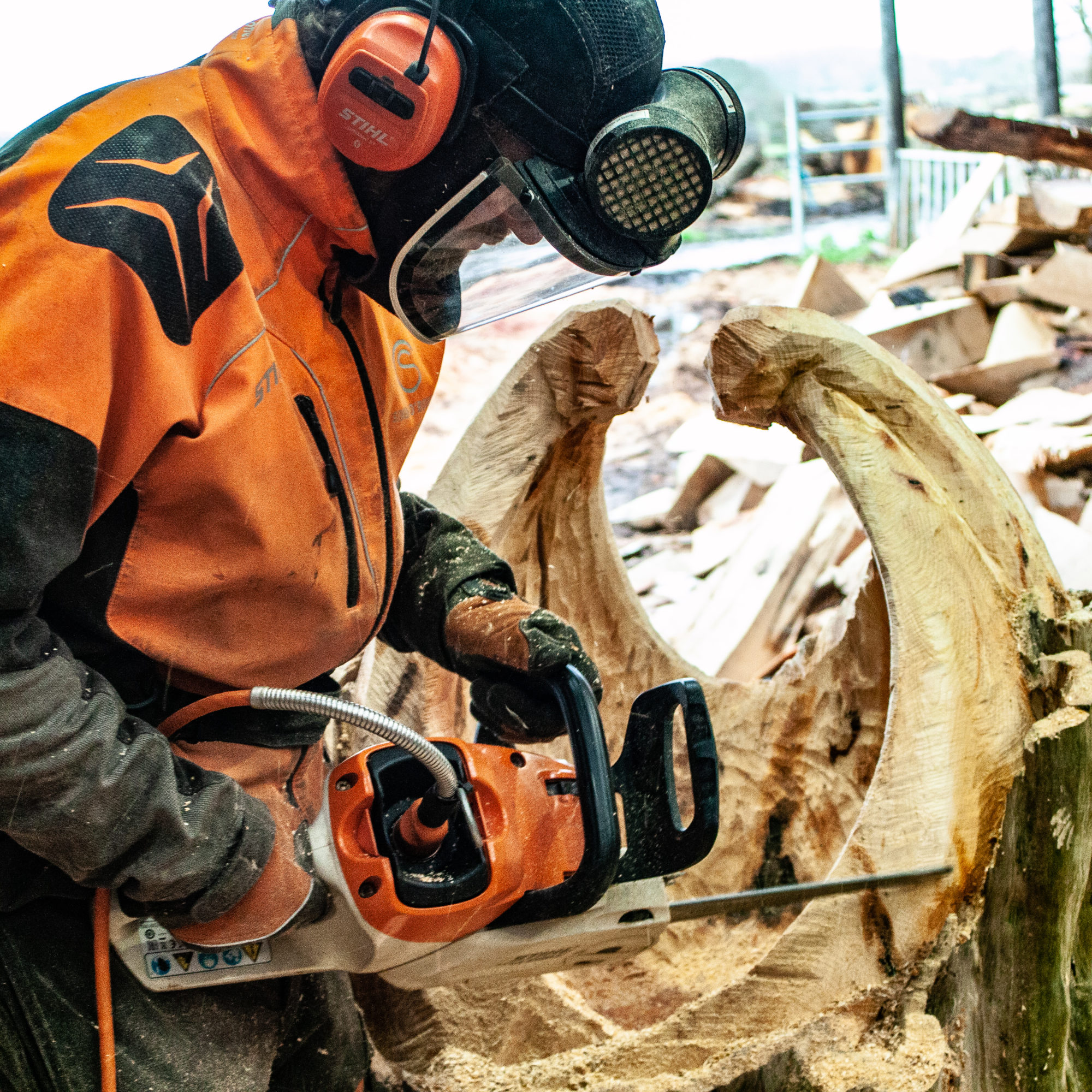 Simon at work creating the dragon wings that shroud the eggs

The mismatched teeth serve several purposes. They help hold the eggs in place which was essential for safe travel! Missing teeth and the texture give a sense of something ancient. The asymmetry also makes it feel edgy – dangerous even – and uncomfortable. 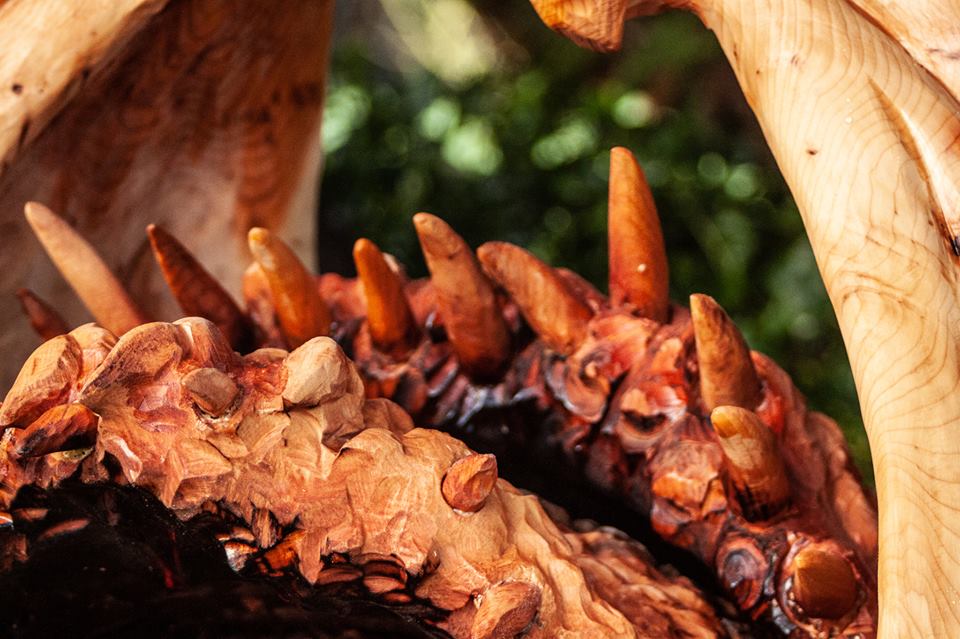 The mismatched and broken teeth convey a sense of danger

Simon chose to use poles to transport the casket. This was not only functional, but the fact it was then carried by four people heightened the sense that this was important, valuable cargo.

Although this wasn’t intentional, Simon also realised that the markings and colour of the yew he used to make it were reminiscent of Daenerys’ hair! Not intentional, but it added to the overall impact of the sculpture! 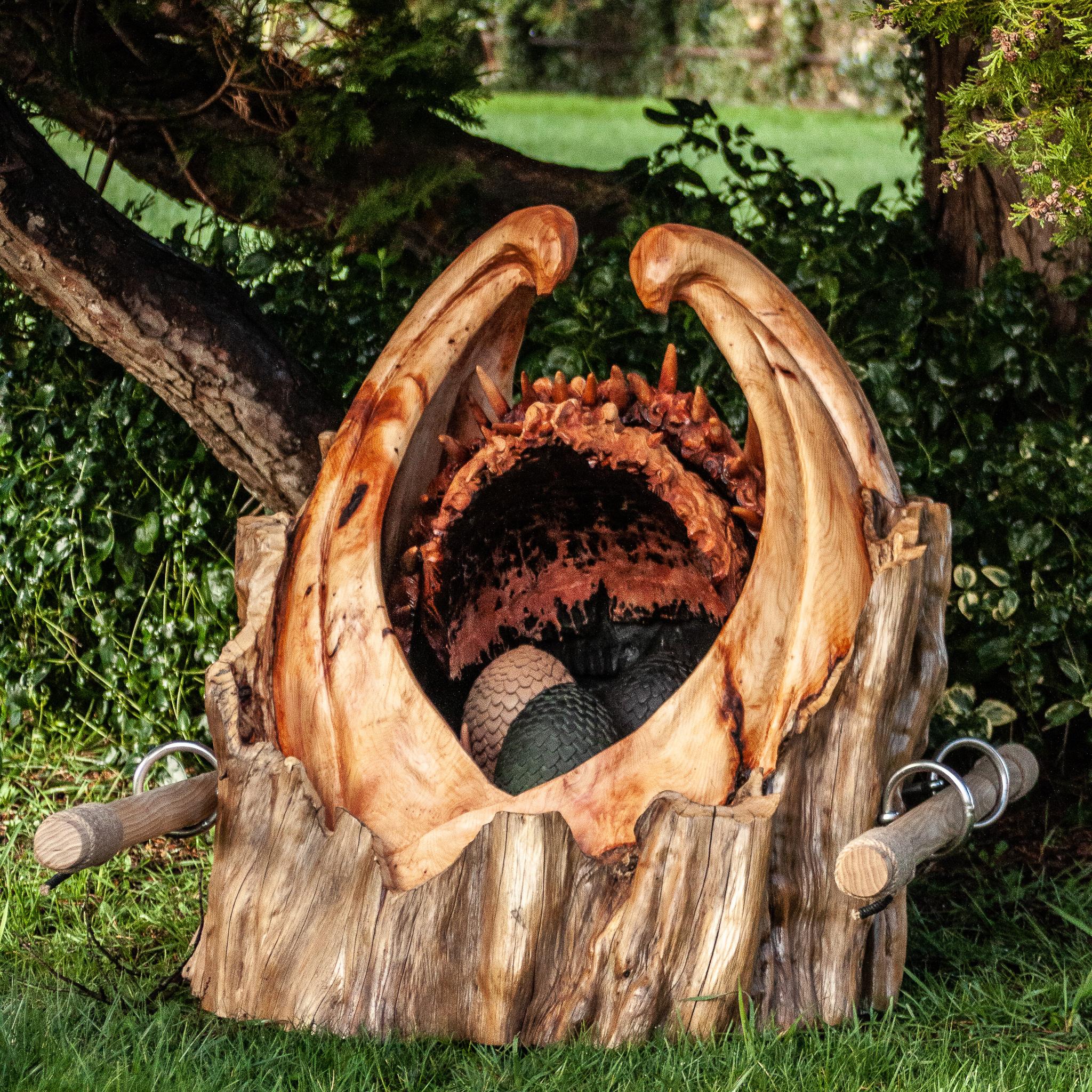 In the TV show, the eggs are not just viewed. Their appearance and the sense of mystery surrounding them invites people to touch them. Each person then experiences something different. For example, Daenerys is the only one who can sense something living inside them.
Simon wanted to create something similar with this sculpture, and did this largely with texture. Things like the smooth wings emerging from the rough bark left with it’s natural markings, contrasting again with the dragon’s mouth, invite touch. The uneven texture and natural curves and knots means each person who touches it will also experience something different – just like the eggs. 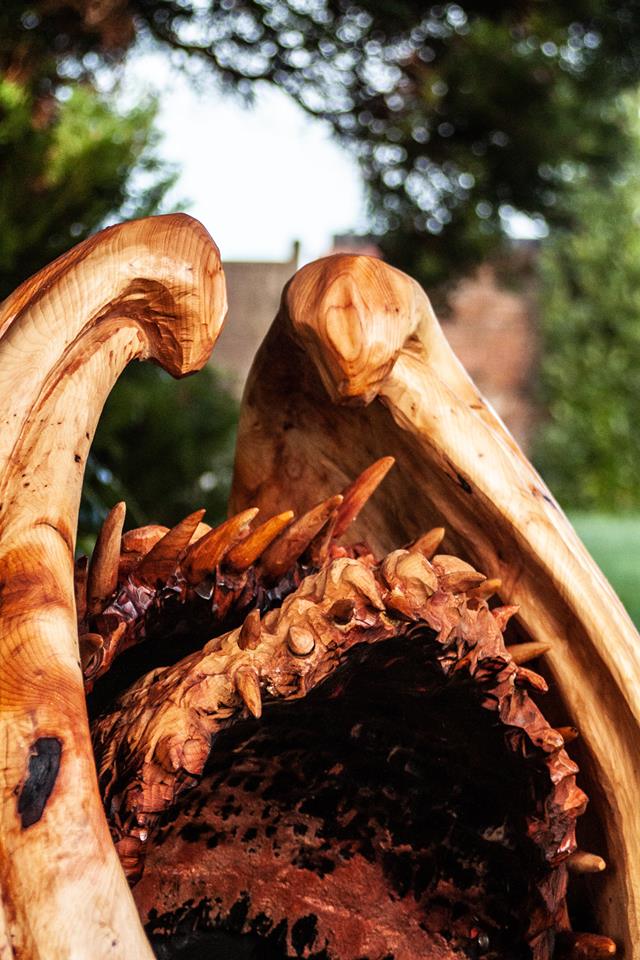 The contrasting textures invite people to explore the sculpture through touch

At the time, Simon was extremely honoured and excited to be taking part in this campaign, along with artists including Jeff Soto, Robert Ball, and Eva Eskelinen. In thinking about the Game of Thrones sculpture now, two years on, and the response people had, Simon and his wife Liz feel just as honoured…

“[we were] just so humbled for Simon’s work to get the responses it did and humbled at how many people love Simon’s work and follow him on our social media platforms. It inspires him to keep going, knowing how much people appreciate his art and his creativity and passion for what he does.” 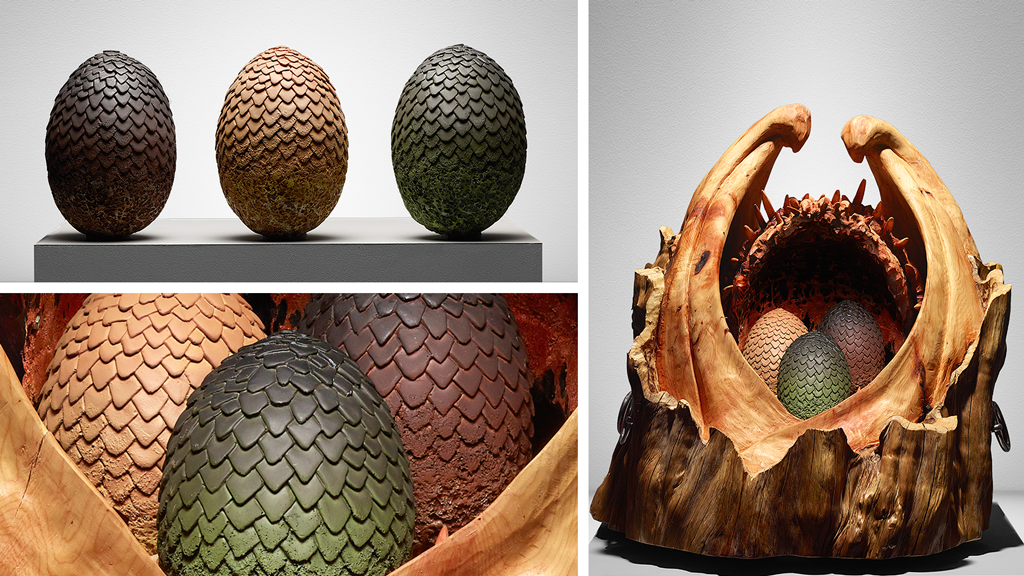 One of the things with revisiting art, is that there is always something new to see or experience. In looking back at this Game of Thrones sculpture, what stood out to you that was different this time? Let us know in the comments.

We hope you enjoyed looking back at this landmark project with us. And, as always, if you would like to chat with Simon about your own commission, contact us using the form at www.treecarving.co.uk/contact/.

You might also like
One of the following
Crohn’s Inspired Sculpture
Bill Badger Sculpture and Bench
The Dragon Tower’s Fire-Breathing Dragon: Ten Fun Facts
Recent Posts

FAQs: Who are your influences?

A Sculpture for All Seasons – Sculptures in the Snow