Can you believe it’s already the August bank holiday weekend?! Time is definitely doing funny things! This weekend is a landmark in the Chainsaw Carving calendar, as it’s normally the English Open Chainsaw Competition. The competition is part of the Cheshire Game and Country Fair, and Simon has taken part many times over the last decade or so. Things are obviously a bit different this year, but we thought we’d mark the occasion by revisiting some of his English Open Chainsaw Competition Entries… 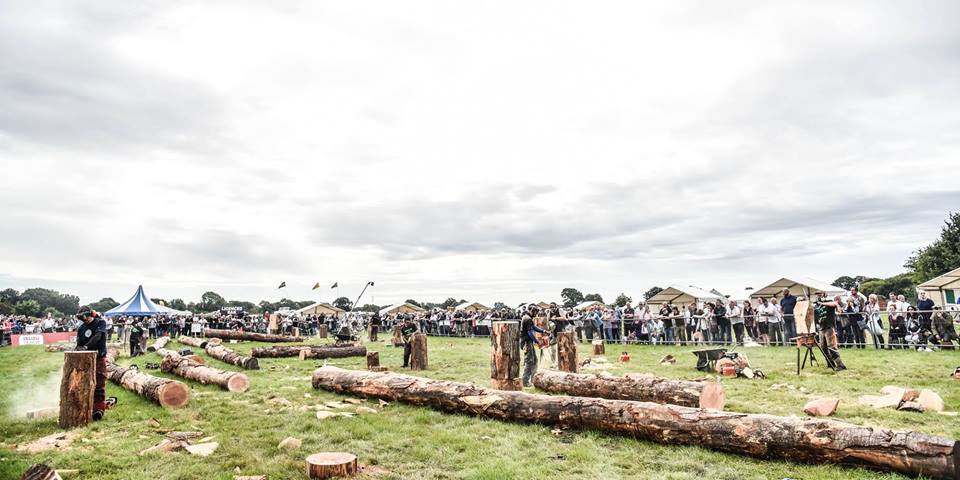 Where it all Began…

Simon first took part in the competition in 2004, and it was a key event in his career. It was his first competition, and he won third place. This helped prompt him to make a career from creating chainsaw-carved wood sculptures. After making that decision, he and his wife Liz set up Tree Carving in 2005… and the rest is history!

Despite being his first competition piece, the first of Simon’s English open chainsaw competition entries not only took third place but also gained national attention. At the end of the competition, artists can choose to auction off their pieces.  During that auction, Simon’s “Sleeping Girl” caught the attention of one of the Sandringham estate managers. Their bid won, and his sculpture was installed at the Queen’s Norfolk estate later that year. Not bad for a first-timer! National news networks picked up the story, which also helped as Simon began his carving career.

Unfortunately there aren’t many photos of this sculpture which proved to be such a landmark in Simon’s career. So, please forgive us the poor resolution of this photo! We promise the photos get better in the rest of the blog! If anyone is visiting the estate and gets a better photo, we would love it if you shared it and tagged us! 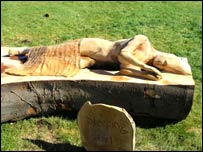 Simon has had a great deal of success at the English Open. In 2007 he created this whimsical fairy sitting on a mushroom. Although Simon’s style has evolved since then, and his sculptures become much more detailed, we can already see his ability to tell a story and create life-like human form sculptures. Judges also admired this piece and he placed first! 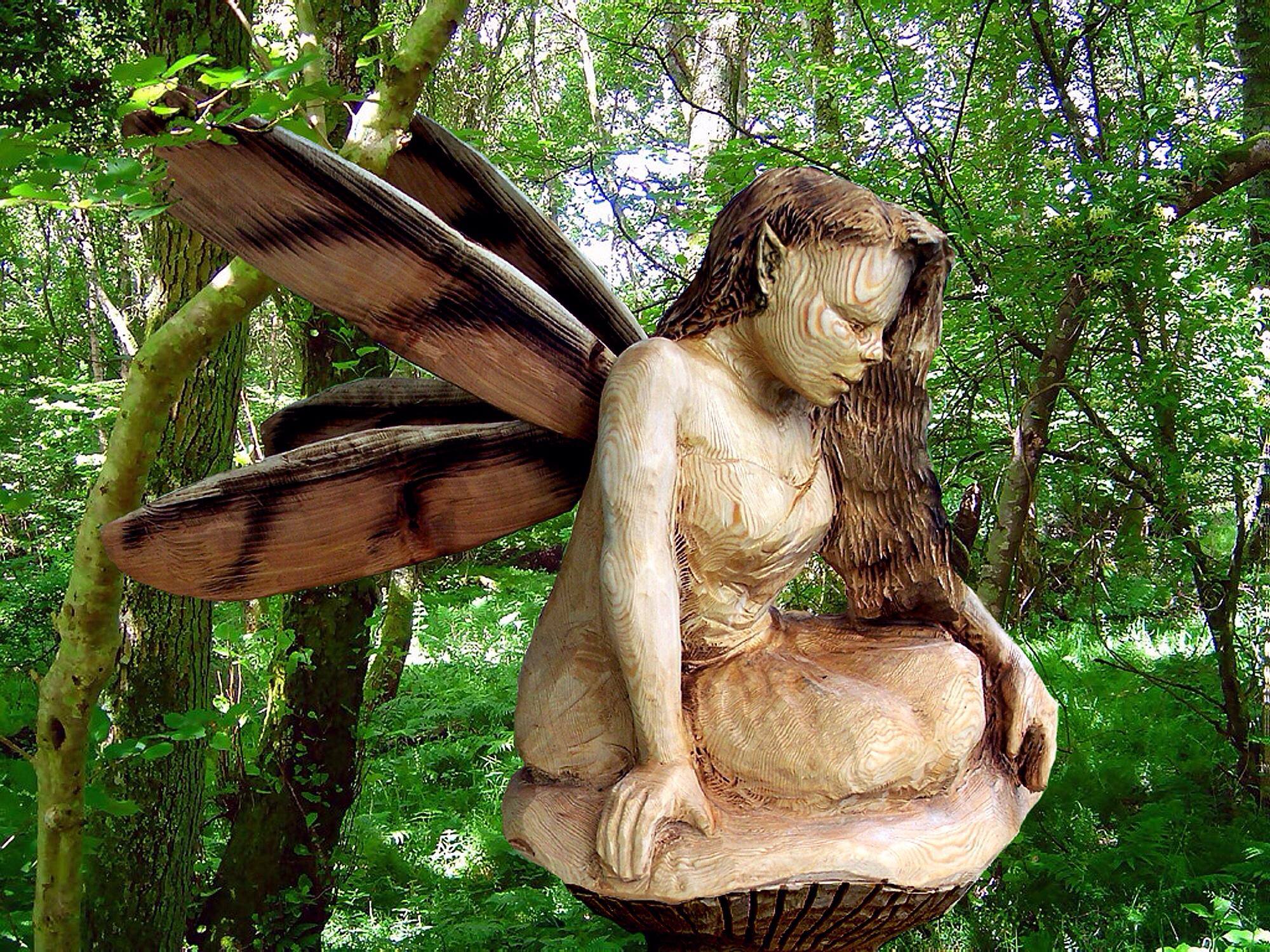 In 2008 and 2009 Simon also won first place with his Neptune sculpture. And once again, he demonstrated his skill at creating stunning human form sculptures.  We can already see much more of the texture that has become part of Simon’s signature style. His facial expression and details perfectly depict this wisened god of the sea, and that physique definitely reflects the power he is said to have. 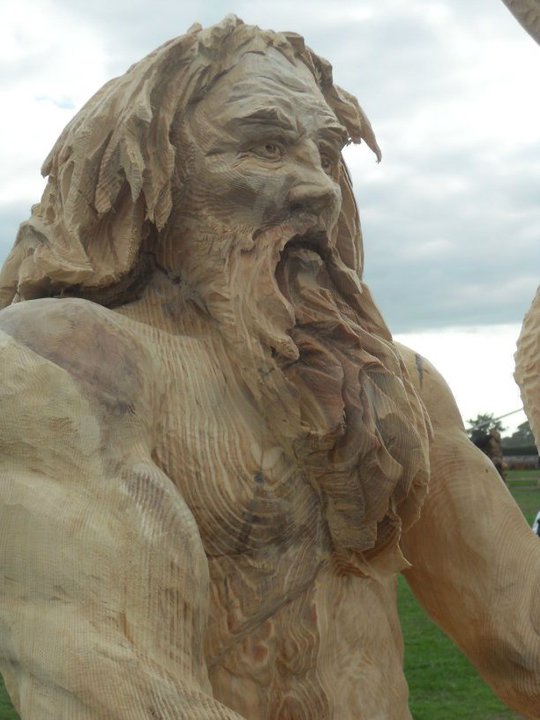 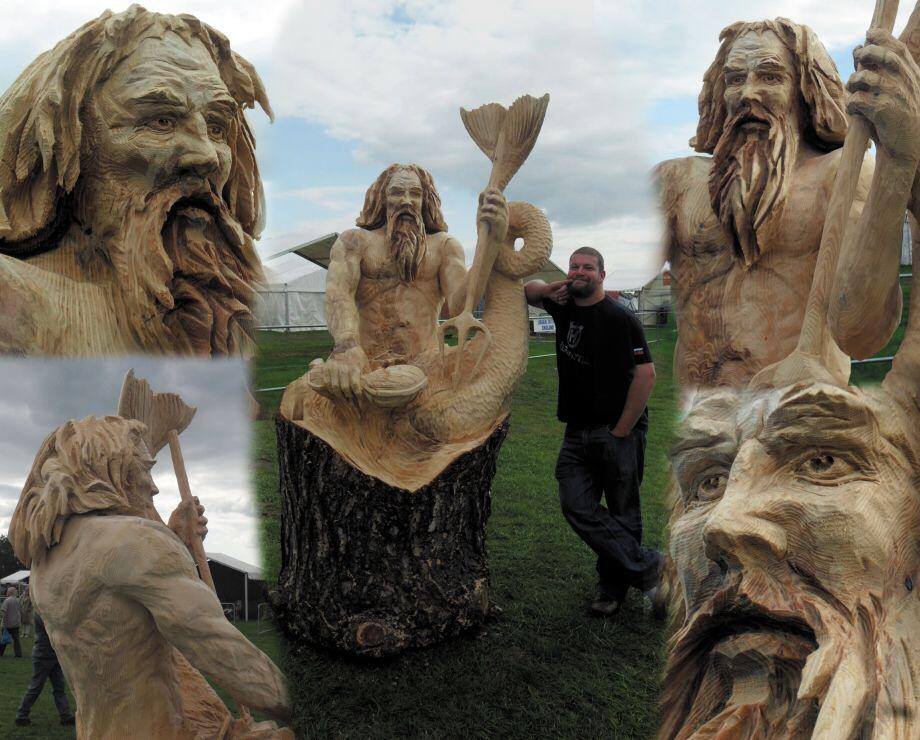 As Simon’s awards page shows, 2010-2013 were also good years for him at the English Open. He placed in the top two each year that he entered. By now he and Liz were a definite part of the tree carving community – one of the fun aspects of taking part in events and competitions.

The nature of chainsaw carving means many pieces are often on a very large scale. Some of Simon’s largest pieces have been the Marbury Lady and the Giant Hand of Vyrnwy. His 2013 entry wasn’t as large as these, but this giant bust definitely showed he could work on a large scale! 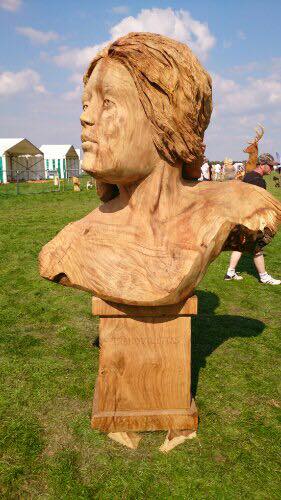 During some competitions, Simon is able to take the opportunity to work on a commission. He may need to refine it later but is able to complete what he can during the time allocated for the competition. 2014 was one of those times. During the competition, Simon created this sculpture of Brother Francis. How special for a client to be able to say their sculpture is award-winning! The piece ‘only’ placed third, but the client was delighted, and this monk looks amazing installed among the trees, enjoying a moment of quiet contemplation. 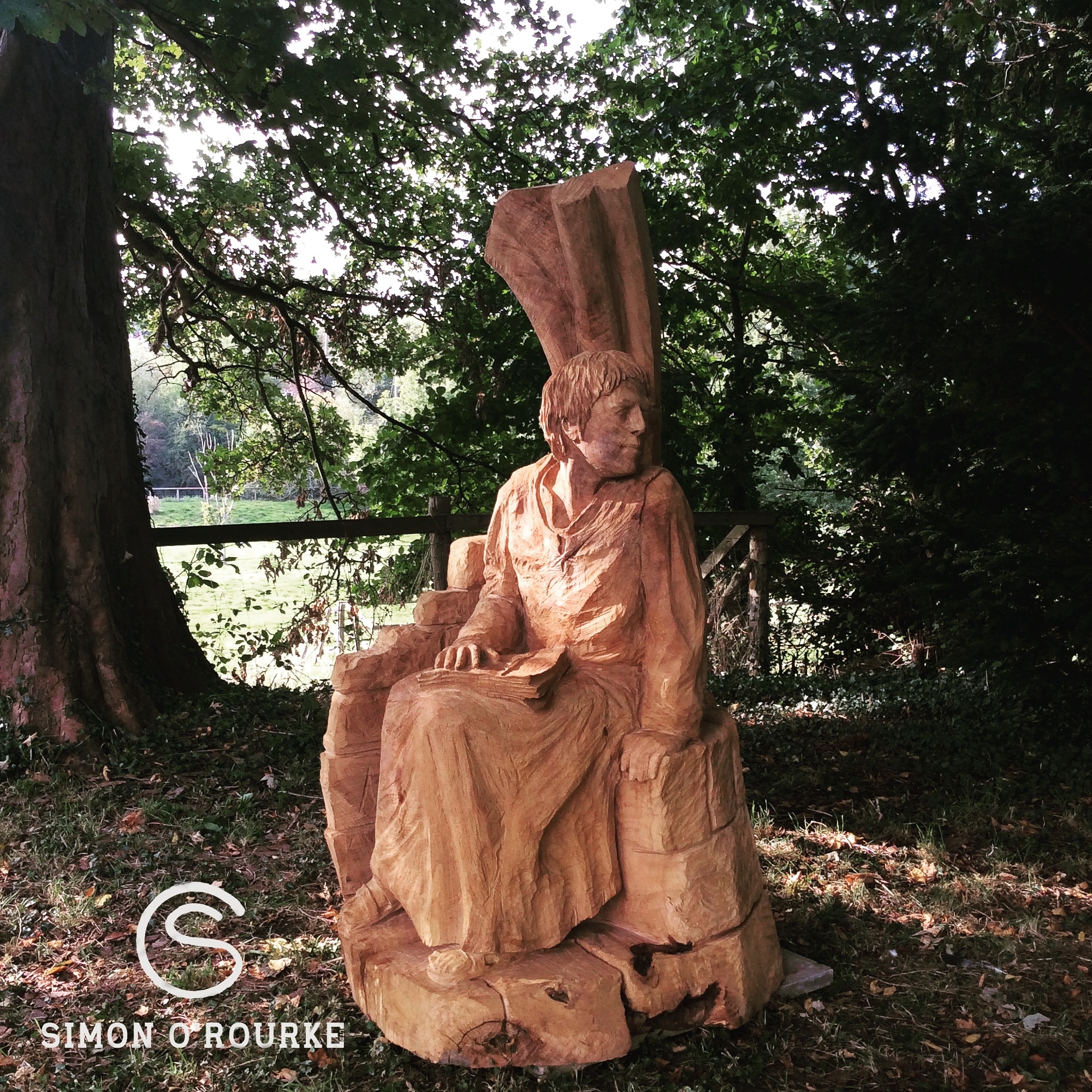 2015 was a winning year for Simon. He took first place with his incredible moving dragon sculpture. The detail is incredible with the scaly texture and attention to detail like the teeth and eyes. The movement was also a real novelty, and took Simon’s skill and creativity to the next level. 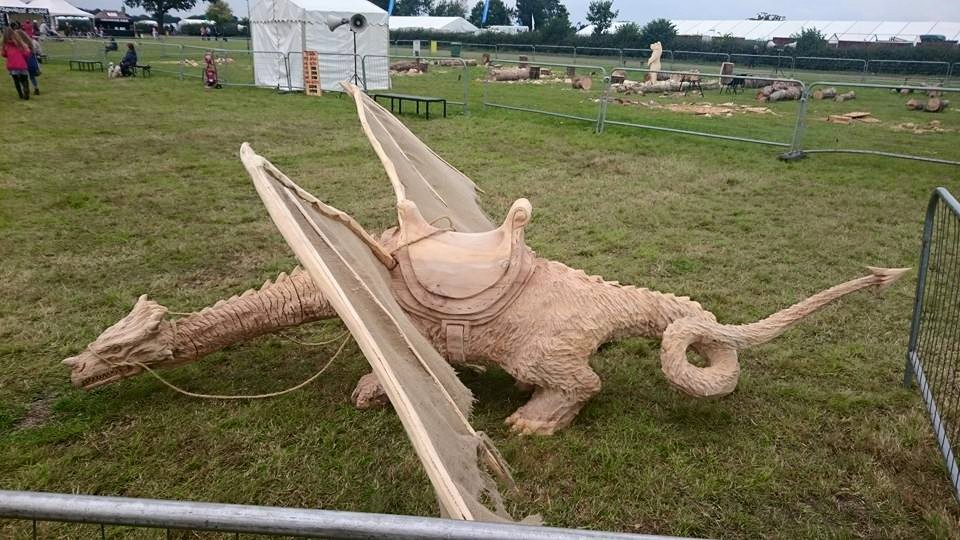 The sculpture didn’t sell at auction, but that turned out to be a good thing. Simon made some refinements to the sculpture and Hemlock was born! Hemlock has since travelled around the UK and is always a hit wherever she goes. She has helped to raise money for Clatterbridge Hospital and other causes, has taken part at ComicCon, and has even been part of a wedding! It’s true! She makes a great photo opportunity and is regularly treated to a dragon spa at the workshop (ie maintenance and repair!) to make sure she always looks her best at your events.

There is no doubt either that Hemlock played a big part in earning Simon his reputation for carving fantastic dragons. Since then he has gone on to create other incredible award-winning, viral dragon sculptures such as The Dragon of Bethesda, the egg casket from Game of Thrones, the yew dragon tower, and most recently, the fire-breathing dragon for The Dragon Tower that appeared on George Clarke’s Amazing Spaces.

To book Hemlock for your event (anyone thinking about a dragon-pulled Santa sleigh this year?!) email us using the form at www.treecarving.co.uk/contact/, and we’ll be in touch! 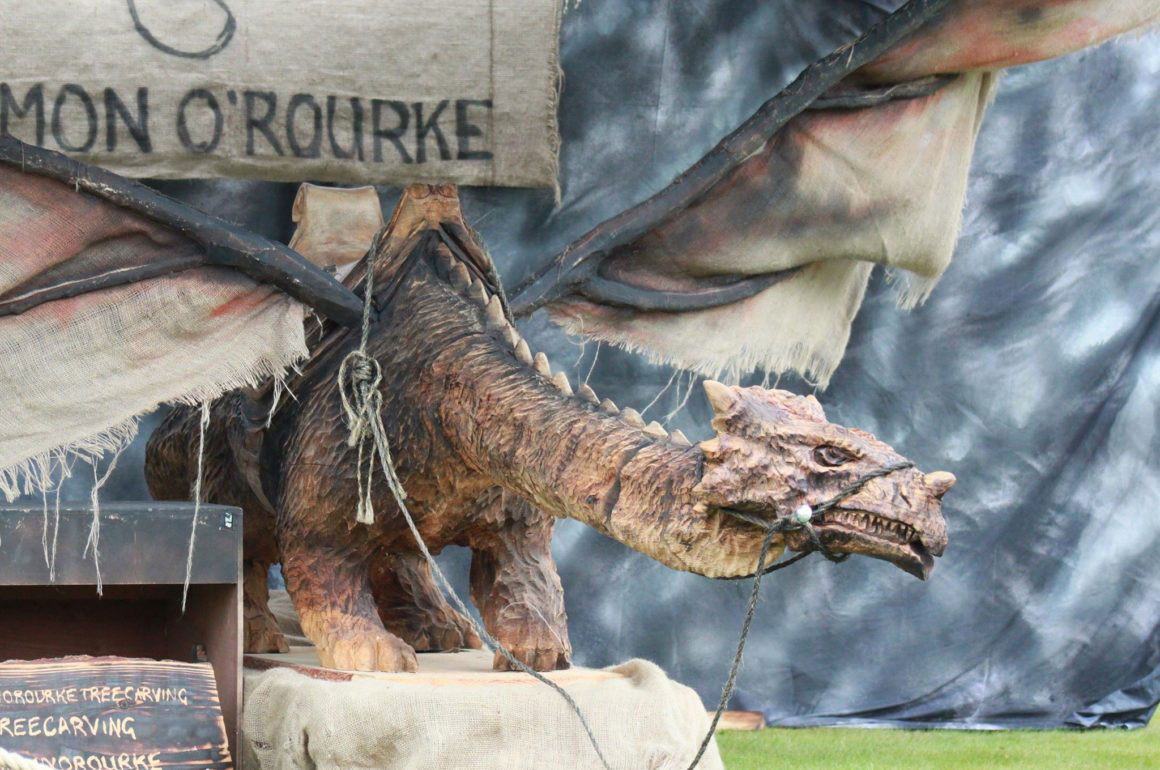 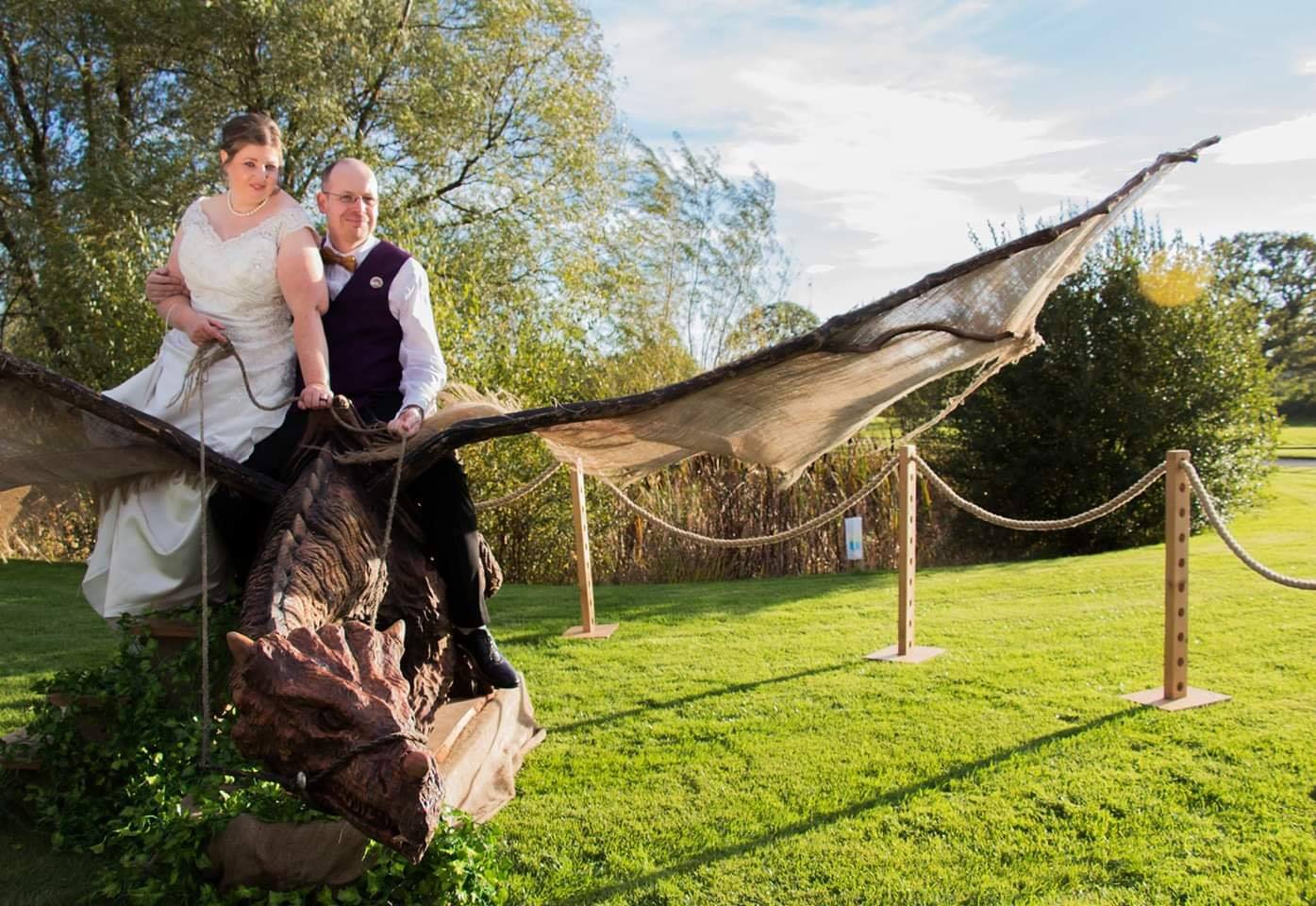 Moving on to 2019, and the English Open was another great year for Simon. He took part in the ‘combo’ competition. This meant creating two sculptures over the three days, one made with only a chainsaw, and the other using any power tools.

His chainsaw-only sculpture was this beautiful, intricate fairy that took second place. You can see the range of Stihl chainsaws he used in the background! 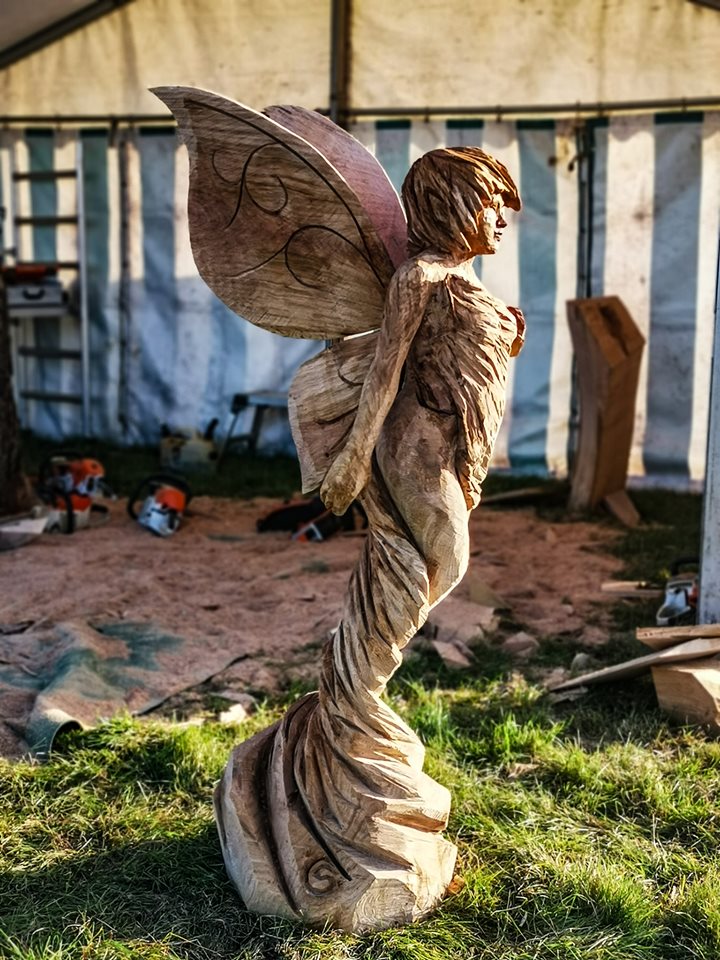 The ‘full power’ event meant Simon could also use his favourite Manpa angle grinder and Saburrtooth bits. He created this angel who is looking truly serene. She doesn’t look at all like she’s been surrounded by chainsaw noise and sawdust for two days!!! She shows all of Simon’s trademark movement in her clothing, and attention to detail in the face. And, as always, Simon tells a story with this sculpture and invites the viewer into this moment of serenity with her. The judges loved her too, and she took first place.

Right now we don’t know when the next event or competition will take place. As you all know, the world and regulations about public events change constantly. Competitions and events are usually a big part of Simon’s summer though. They go beyond an opportunity to carve and are usually a brilliant time to connect with other artists and gain more inspiration, knowledge, and skills. We find some of them actually make for a fantastic day out too for observers, such as Huskycup or the WoodFest.  We’ve definitely missed them this year, although a change is nice too.

However! Simon does still have some space in his calendar later this year for outdoor events, such as ice carving demonstrations at Christmas, or even something ‘autumn-themed’ for your October half term event. Although the large scale events can’t happen, there are still ways to include and enjoy a live demonstration. Email us at [email protected] or use the form at www.treecarving.co.uk/contact/ to ask about ideas and availability.

Sculptures of Myths and Legends

Sporting Sculptures made by Simon