We’re marking Earth Day 2019, by talking about one of Earth’s (and Tree Carving’s!) most vital resources: Trees!

Trees are the biggest plants on the planet. They give us oxygen, store carbon, stabilise the soil and give life to the world’s wildlife. They are also the material that forms the basis for everything that Simon produces , whether life size human form commission, furniture, or accessories (have you ever seen his bowties?!) 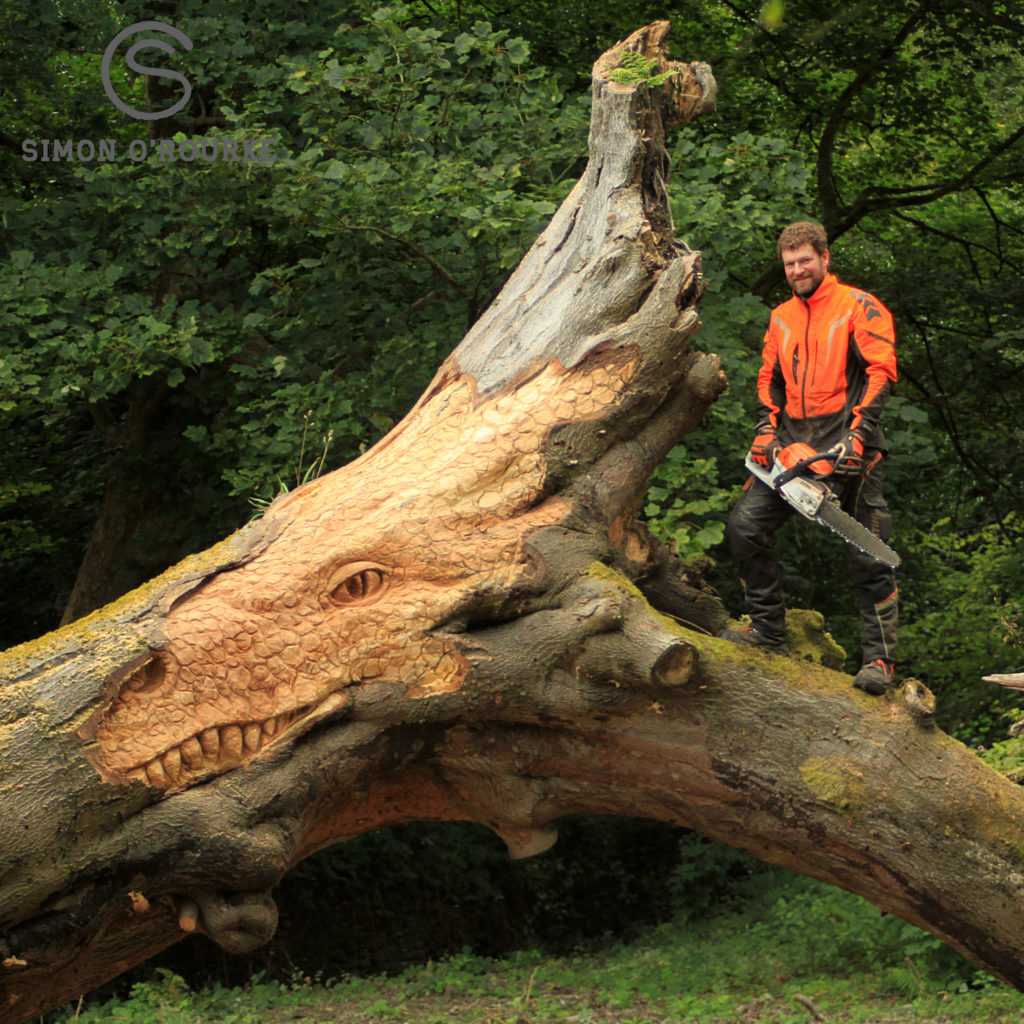 Carving a dragon into a fallen tree

Simon definitely hadn’t planned on tree carving as a career. After A levels, he began a degree in illustration. He actually hoped and planned to be a freelance illustrator of children’s books. After graduation however, he took a job with Acorn Arbor Care as a tree surgeon. The idea was, this would give him an income while he built up his illustration portfolio. And so, at this time he began working with chainsaws. In fact, the first saw Simon used was made by Stihl, . In one of those ‘full circle’ kind of stories, they are now his current sponsors!

Realising he could be creative as well as practical with a chain saw, Simon tried his hand at carving. There was something special for him in discovering that “such a potentially destructive tool can be used to create beauty”. After that discover, the rest – as they say – is history!

As well as the appeal of the chain saw, the wood itself is full of appeal. Part of this is in its ever-changing nature, which then shapes the finished product, beyond Simon’s first idea. He can plan a piece with detailed sketches and have an idea of what he wants it to look like. However it has to evolve a lot once the carving actually begins. The grain dictates where the natural strength of the timber is and can give so much inspiration for the shape of a sculpture. Every tree is unique and you never know what you’re going to find when you cut into a piece. 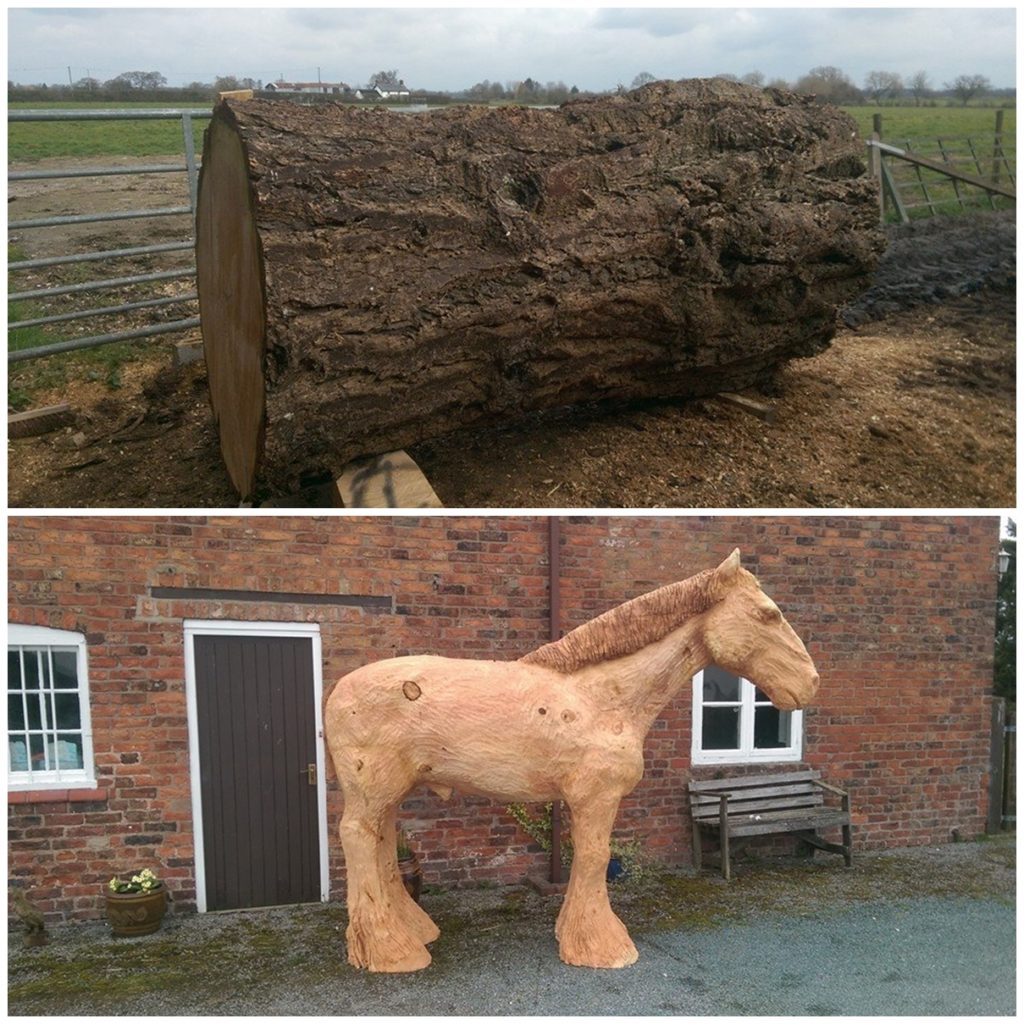 The timber used for this carving of a shire horse. The natural grain enhances the texture and shape of the horse.

On Earth Day 2019  when we are thinking about preserving the world’s resources, it is also natural to be wondering where all this wood is coming from. Is tree carving damaging to the environment?

Far from it. Tree carving is one of the more sustainable mediums for sculpture. Working with a natural material means that although it weathers well, eventually it will degrade, as all wood does. At this point, it is returned to the earth – no land or ocean filling here!
In addition, Simon uses trees that have either fallen naturally, or trees that have become dangerous or diseased. Most importantly, he always uses wood that has come from a sustainable managed location. This includes domestic housing and managed forests and woodlands. One example of this which went viral earlier this year, is his carving ‘ ‘The Dragon of Bethesda‘. This dragon commission actually came about because of an arboretum owner wishing to do something with a storm-damaged fallen tree. 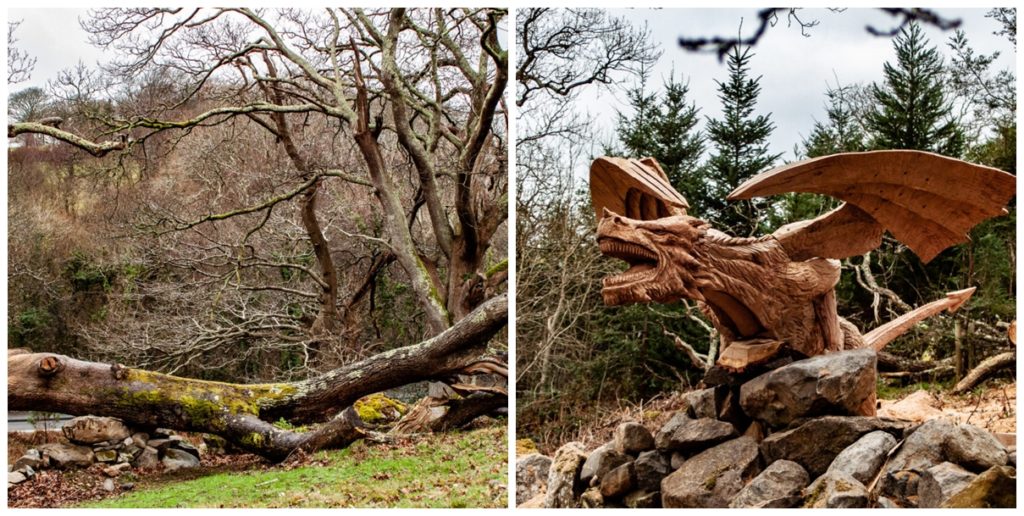 The Dragon of Bethesda, before and after

As lovers of the outdoors and environmentally aware citizens, Simon and his wife Liz enjoy the opportunities that they get to educate others too about the resources we have and how to take care of them through their work. Whether it takes the form of educational captions on a nature trail commission, sharing their hearts in interviews, or through Liz’s role as a forest school teacher, their appreciation for the world around them is clear, and not only do they model responsible use of the world’s resources as individuals and businesses, but they also inspire others to do the same. 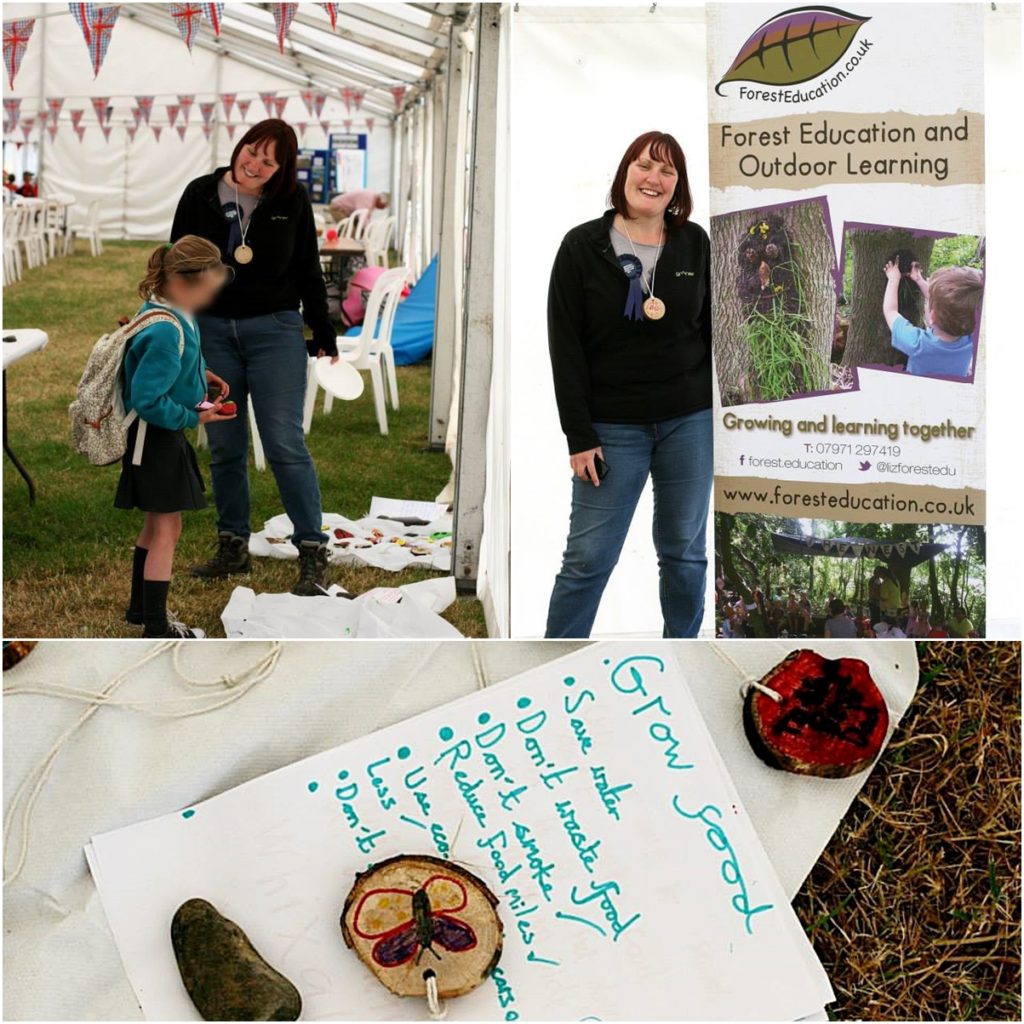 Liz at a forest school session. They even recycle the repurposed wood, using off-cuts from sculptures for classroom supplies like these wood chips!