A year ago, George Clarke’s Amazing Spaces featured Simon and his fire-breathing dragon sculpture, Maggon. Maggon was commissioned by Guy and Tracey, the owners of The Dragon Tower; a holiday rental property at their home in North Wales. He was the finishing touch to an incredible and innovative renovation that even includes a folding bathroom! It was fantastic to create something that’s become so integral to their home and business.
One year on we contacted them to find out what it’s like living with a fire-breathing dragon. We loved what we heard!
Read on to find out ten fun facts that we learned about the dragon tower’s fire-breathing dragon… 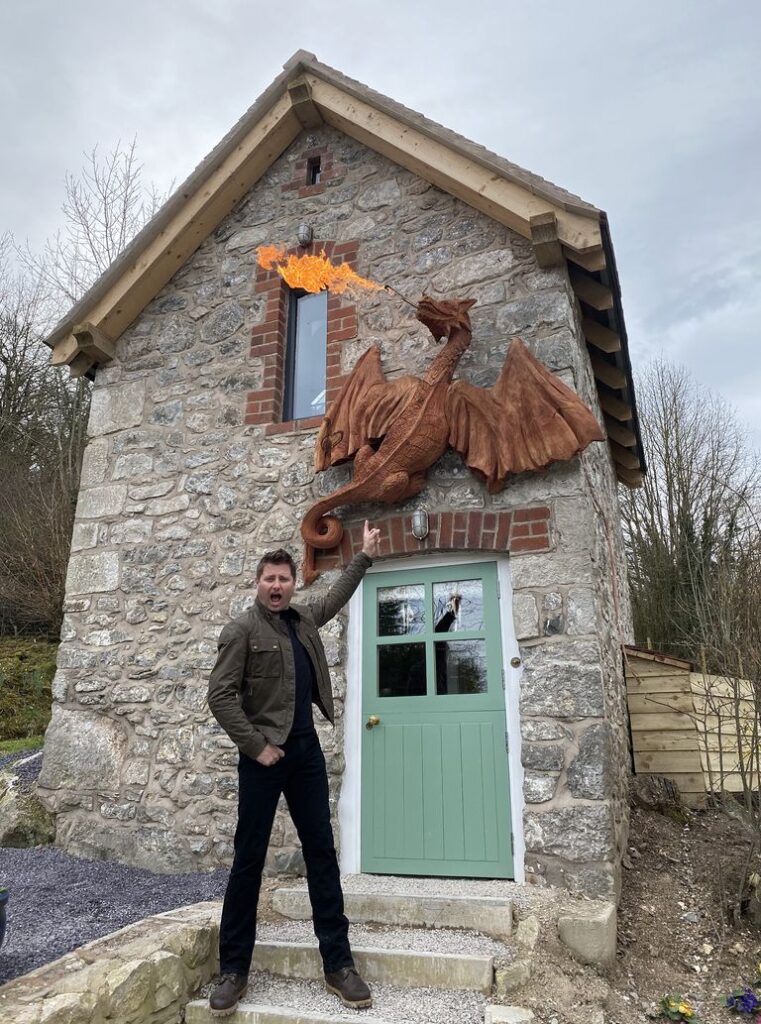 The Dragon Tower’s Fire-Breathing Dragon Fact One:
Kids Love Him!

Kids love Maggon! And in the way only kids can, they have some funny ways of finding language to describe what they experience. Apparently, he sounds like a hot air balloon!

At New Year the village was locked down due to covid. This meant none of the usual firework displays. But that doesn’t matter when you own a fire-breathing dragon! Guy and Tracey fired him up at midnight for the village, using their sculpture to help foster community.

Happy New Year to all and everyone! With love from Guy, Tracey, Ebony and Maggon the New Year Dragon. #slowmotion #happynewyear2021 @treecarving @MrGeorgeClarke #firebreathingdragon pic.twitter.com/t2JZtGBNQz

Guy and Tracey are often asked if Maggon cooks things. So they gave it a try!
And guess what?
It turns out that Maggon is the perfect marshmallow toaster – from a safe distance of course!
As Wales is the land of dragons, we can’t think of anything more perfect to be part of a Welsh holiday experience! How often do you get to say you ate a marshmallow cooked by a dragon?!

The Dragon Tower’s Fire-Breathing Dragon Fact Four:
He Gets More Handsome With Age!

As you know if you read this blog about how wood ages, Simon believes the natural ageing process of wood adds beauty and character to the sculpture. Thankfully, Maggon’s family feel the same! They describe him as being more handsome now than when he arrived. They also commented on how he has lightened in colour. In time he will not only lighten, but will take on more grey hues and complement beautifully the Welsh stone building.

The Dragon Tower’s Fire-Breathing Dragon Fact Five:
You Can Spot Shapes in His Flames

Some of us like to find shapes in clouds. But when you have a dragon, it’s more fun to spot shapes in his flames! Guy and Tracey have had some great photos of Maggon’s flames from guests. As you can see in the photo below, he can even make Mini-Maggons!

The Dragon Tower’s Fire-Breathing Dragon Fact Six:
Tracey Would Love to Write a Story About Him.

Simon loves to tell stories with his sculptures. However, he likes to leave the narrative open for some imagination. And so with a sculpture like Maggon, and clients that are so creative we can’t wait to read it and see what adventures they imagine he has had!
It’s worth noting too though, that if you’re a business owner, this is a great way to create revenue from your sculpture. Or you could incorporate a story into a sculpture trail. 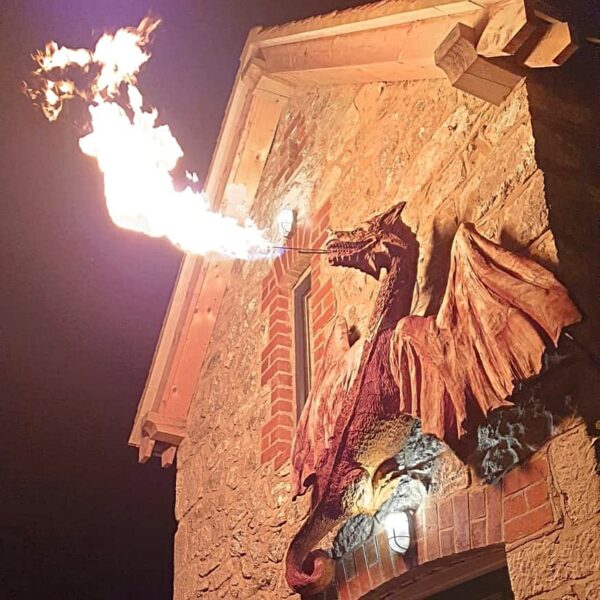 Can you see Mini Maggon in the flame? Photo Credit: The Dragon Tower

As wood changes over time, a chainsaw carving sculpture takes on a new look over time. Maggon is no different, and Guy and Tracey commented that he looks different every time they see him.
The material is also a work of art itself. Guy and Tracey have spotted a knot on his wing that looks like a love heart. We wonder if that will be part of the story when it’s written.

The Dragon Tower’s Fire-Breathing Dragon: Fact Eight
He’s A Dragon For All Seasons!

Guy and Tracey have had fun dressing Maggon for each season, and he even has his own sled to help deliver gifts at Christmas! Rain, shine, Christmas, Easter, Halloween… Maggon is part of it! 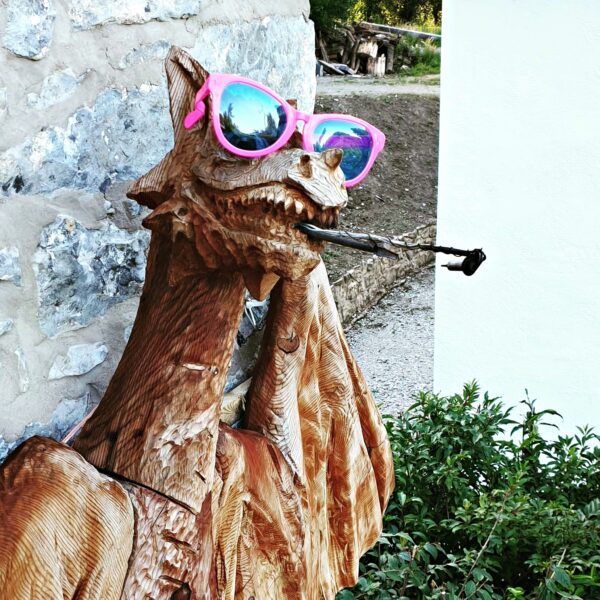 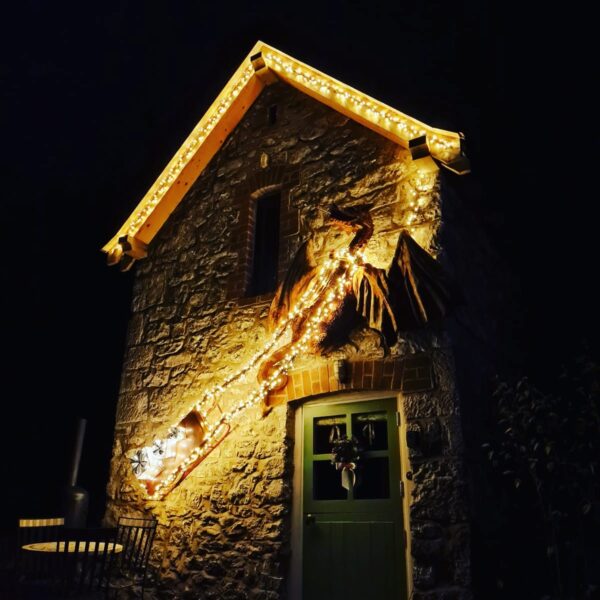 Guy and Tracey give guests to The Dragon Tower a fiery welcome from Maggon. And their eyes light up each time! What customer doesn’t love a welcome like that? And what business owner doesn’t want that impact and fun as part of their guests’ experience?

The Dragon Tower’s Fire-Breathing Dragon: Fact Ten
“We’re known as The Ones With the Dragon”.

Our last fact leads us nicely to this. Maggon the fire-breathing dragon is a unique statement piece, and makes them stand out from everyone else. Even the locals know them as ‘The ones with the dragon’. It’s so important to have something unique as a business. Something you can be known for and that makes you stand out from the others.
Guy’s amazing folding bathroom would have done that alone. The gorgeous Welsh landscape and access to both North Wales and the North West of England we already strong selling points for The Dragon Tower. But Maggon has just added a little more to that, and given them something that both they and their guests can enjoy. 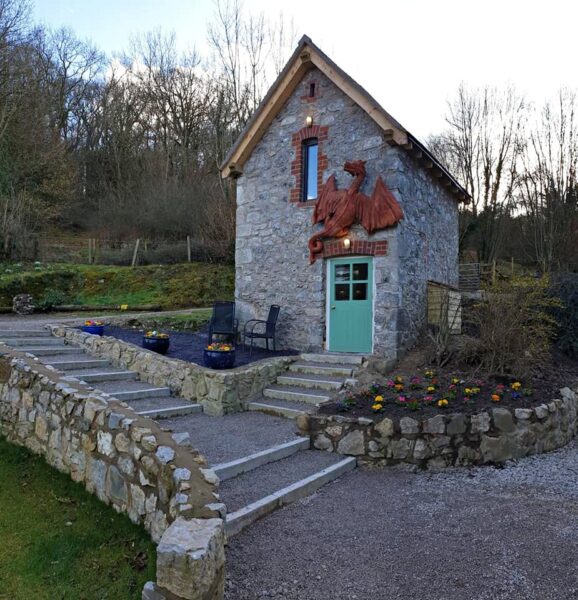 A year after the program aired, it was lovely to hear from Guy and Tracey, and hear some of their thoughts about Maggon (you can catch that episode HERE if you missed it). It was so clear that Maggon the Dragon has not only become a vital part of their business, but also a much-loved part of family life. It’s a great example of how a sculpture can add value to both work and home at the same time. We also love seeing Maggon wearing his outfits and toasting marshmallows!
The Dragon Tower was always absolutely brilliant in its own right, and to be able to add something more to something like that has been a joy. 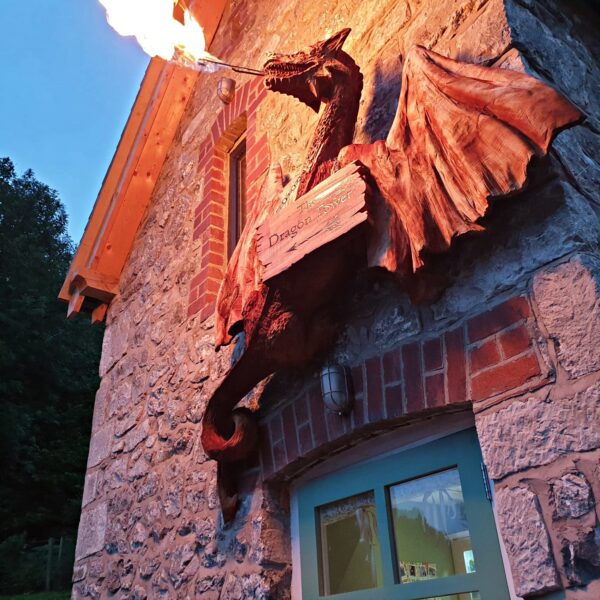 If you feel inspired to commission a sculpture for your work or home, contact Simon using the form at www.treecarving.co.uk/contact and he’ll be in touch!

How The Prestatyn Walker Sculpture Could Help Rejuvenate a Town

Tips for Getting Started in Chainsaw Carving