There are two approaches to tree carving that Simon practices. The first is to design the piece, and then find timber suitable for the project. The three footballers that you may remember from last year are an example of this. In fact,  as you may remember from the Queen of the South Legends blog, completion was actually delayed because of sourcing timber after the original piece had a split.
The other approach is carving a standing stump. This means letting the tree dictate the design rather than the design dictate the timber. Sometimes the shape inspires the subject. Other times, it means making changes to the design along the way to accommodate the shape, size, twists turns and any surprises once the bark is stripped and Simon begins cutting. This was certainly the case with Simon’s latest project: creating an Oak Maiden. 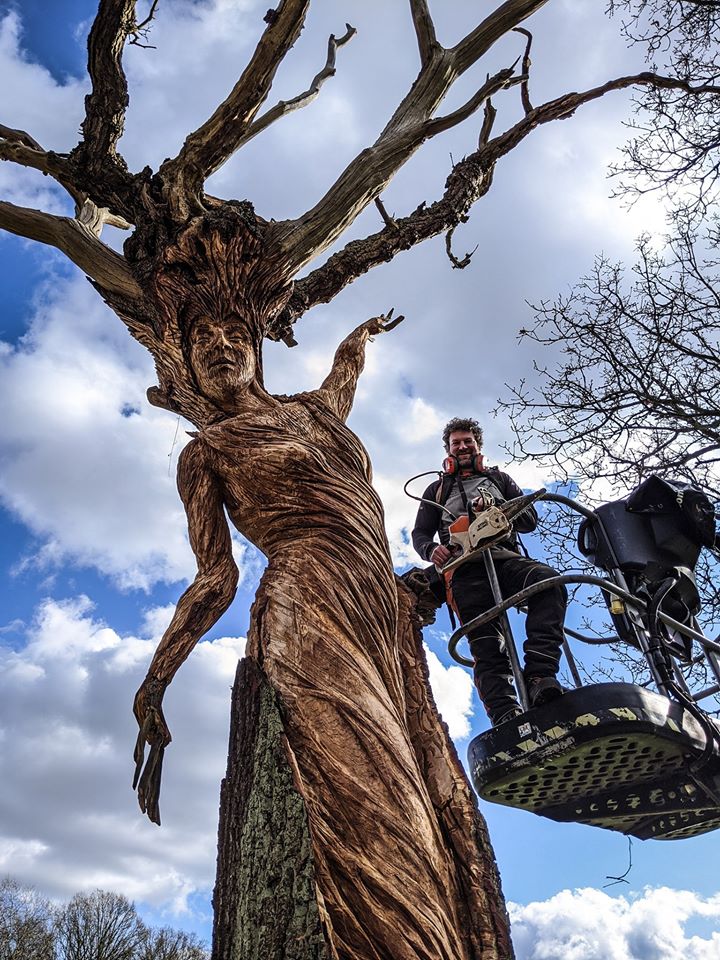 This Oak Maiden looks incredible! However, she wasn’t actually what Simon had planned! The client who commissioned the hydra rising out of the ground, had asked Simon to look at another tree. There was an oak that had died and she wondered if it would make a good sculpture. When Simon first saw it, he could see female form. He also noticed the many branches at the top. Rather than cut these off, he imagined them to be a key part of the sculpture. And so, his initial concept was Medusa. The trunk could be transformed into a striking female form, and Simon imagined those undulating branches would make perfect ‘snake hair’. As a Greek mythological character, she would be a beautiful compliment too, to The Hydra. The client agreed, and Simon arrived at the start of last week expecting to create another Greek myth….. 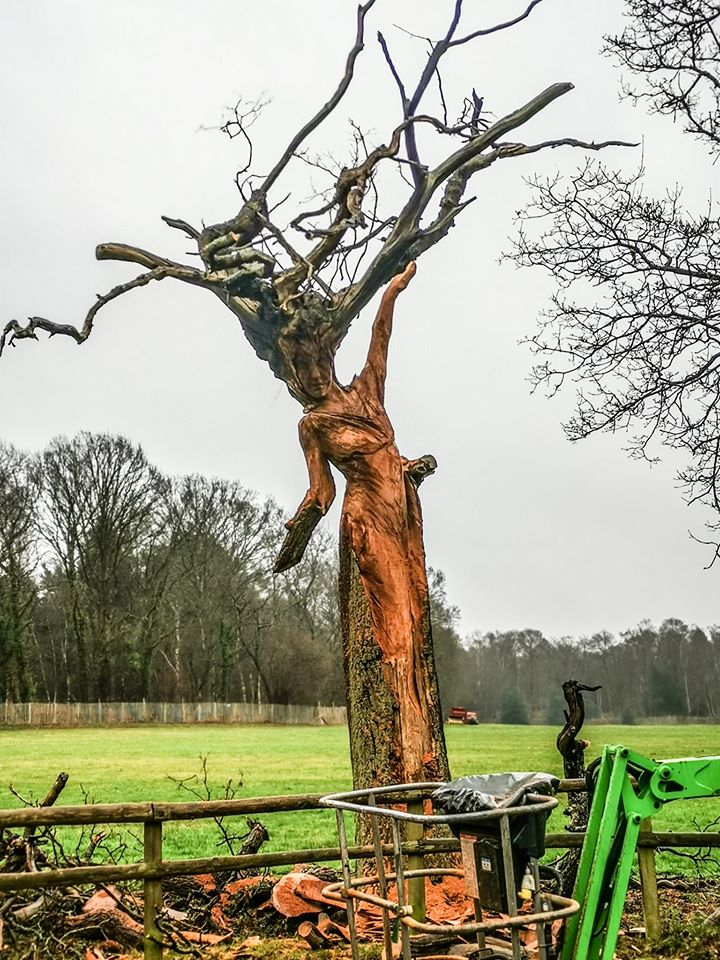 Day one of creating an oak maiden. It’s easy to see why those branches suggested Medusa!

Just as happened with The Hydra though (originally it was going to be a flock of birds or pterodactyls rising from the ground), once he began work, Simon realised that his original design wasn’t going to work. The branches at the top simply weren’t right, and he knew it would be better not to try and make them into snakes.

This flexibility and ability to respond to the timber is part of what makes Simon a great artist. Adapting his design to the work with the shape and features of the timber means creates sculptures which aren’t contrived. In fact, one comment on his Marbury Lady sculpture was that it seemed like she was always there in the timber, and Simon simply uncovered her. 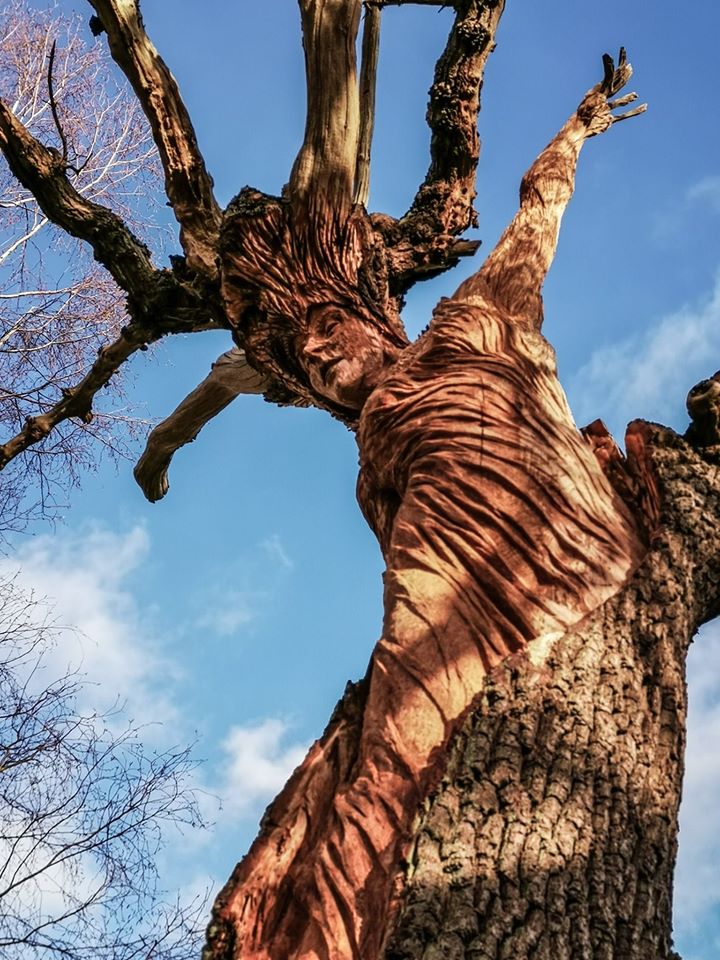 Adapting the design to work with the branches was an aesthetic decision. However, sometimes Simon also has to make changes because of practical reasons. This isn’t just about what he can see either. He also has to take into account what will happen to the timber as it ages. What may seem a small crack at the time for example, could cause massive damage to a sculpture later if he isn’t wise.

Another change in creating this oak maiden was because of one of these practical considerations. When we look at the oak maiden, her ‘crown’ appears bulkier to the left. In his ‘ideal’, Simon would have reduced some of that wood to create a more elegant or slimline look. However, there is a large amount of weight in the branches above it. This meant Simon faced the choice of losing some of that weight (and some of the rustic, organic, woodland feel to the character), or adapting his initial vision. 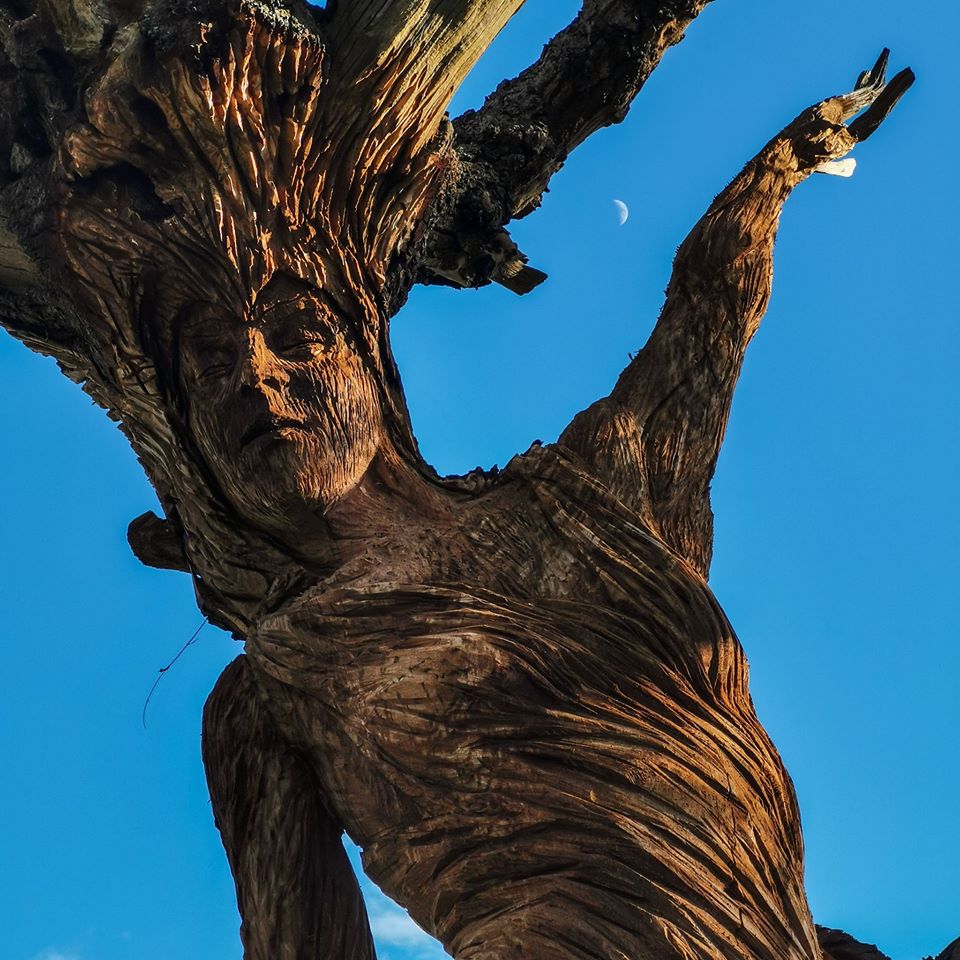 Close up showing the bulk of wood on the left

Simon chose to leave the wood on the left side of the face, to support the weight above it, and again demonstrated his skill at using challenges to create something even better! The extra wood became this fantastically textured crown instead, rather than being unnecessary bulk, it is now part of the story that Simon tells through sculpture. The weight and size is suggestive of a crown that now seems to enhance the status of this Oak Maiden. It reflects the strength and majesty of an oak tree, and conjures up an image of this Oak Maiden being a princess or queen among the woodland characters. 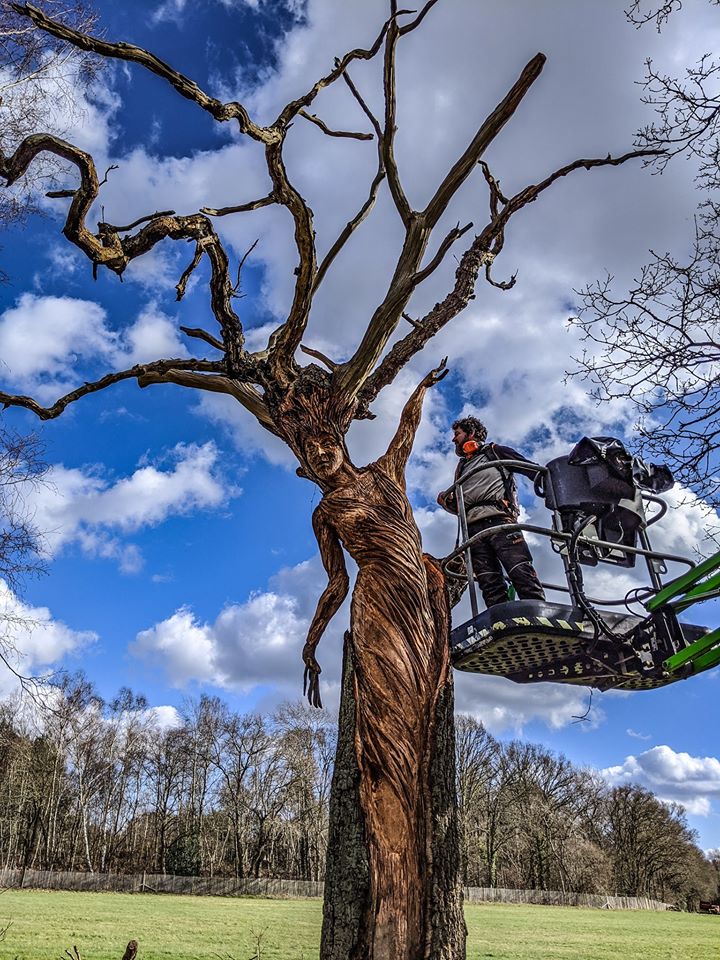 This photo gives a sense of the scale of the sculpture

One of the things that makes Simon’s human form sculptures so exceptional, is his attention to story and structure and how they create movement. We saw this with the Marbury Lady and Prestatyn Hiker that you may have spotted on Facebook or Instagram. The clothes in both showed the lines and wrinkles associated with being worn by a living, moving being rather than being hung static in a wardrobe. In this case particularly paid attention to the shape of the form underneath the cloth. For example, the skeleton, muscles, shape, size and position of the subject. Similarly to the Marbury lady, he also left raised wrinkles to imply a very thin material which skims the body. 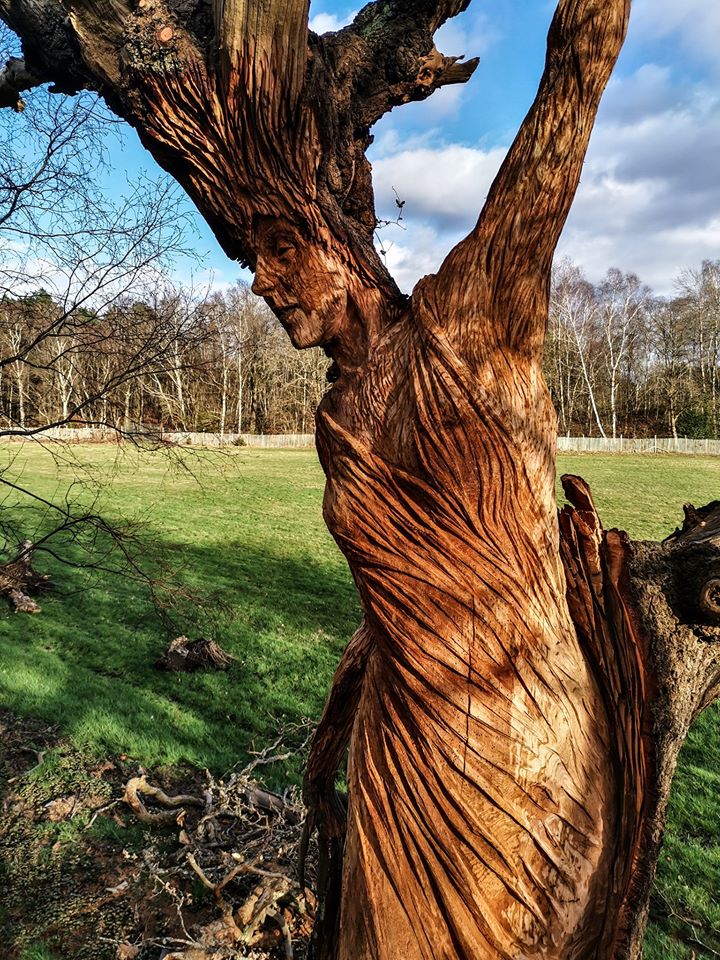 Creating an Oak Maiden: The Tools!

It sometimes seems amazing to think that suck a beautiful thing can be created by something as destructive as a chainsaw! In the case of the Oak Maiden, Simon relied a lot on the Stihl MS400. Stihl’s MS400 is the first chainsaw  to make the change to a magnesium piston. This, and it’s “impressive power-to-weight ratio of 1.45 kilograms per kilowatt”, has made it much more ‘punchy’. Combined with the 20 inch Tsumara carving bar, Simon found  it worked really nicely for controlled shaping.
The Saburrtooth bits have fast become an essential on the job too. These are largely what Simon used for refining the face and hands, creating small areas like the eyes, and adding texture. Some of his favourites are the conical burr, and the large coarse flame bit. The small eye bit also helped create sharper lines and bring more expression to the eyes. 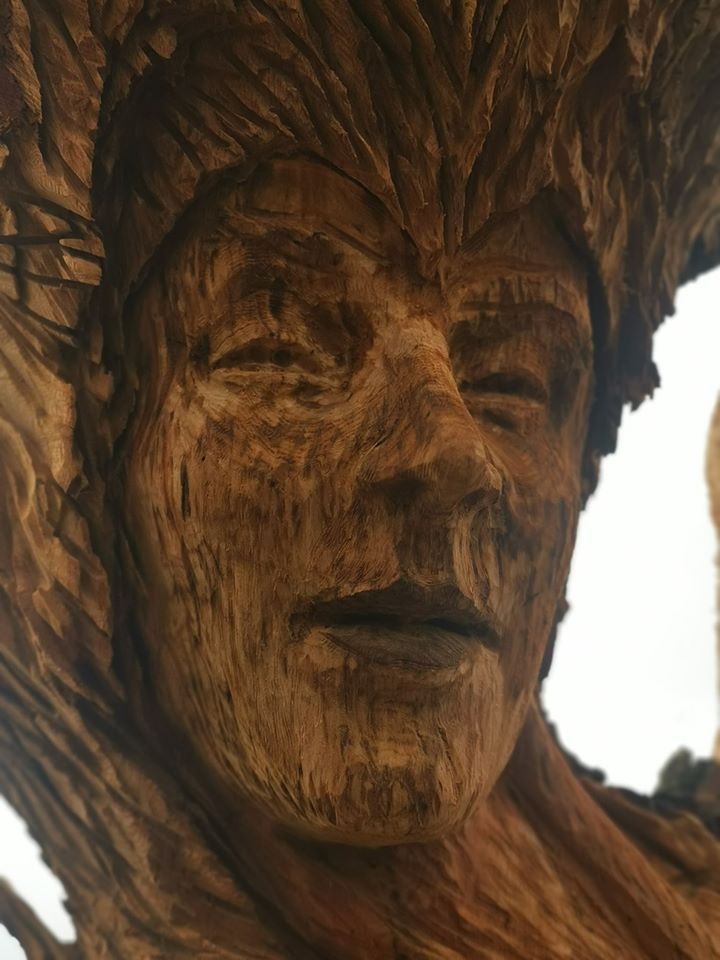 This nymph (or as we’ve been calling her, ‘Oak Maiden’) has definitely been a hit on social media. Most importantly though, the client loves her! The Oak Maiden may not have been the original plan, but Simon has created something even better and truly lovely, restoring life to this dead oak.

If you have a dead tree on your property, why not chat with Simon to see if he can imagine something in it? He loves to bring life back to dead or damaged trees, and can create you something completely unique. Contact him on [email protected] to talk about ideas and quotes.

On Working with Acton Health and Safety