Capenhurst Woodland Scene https://www.treecarving.co.uk/wp-content/themes/movedo/images/empty/thumbnail.jpg 150 150 Simon O'Rourke Simon O'Rourke https://www.treecarving.co.uk/wp-content/themes/movedo/images/empty/thumbnail.jpg February 7, 2020 January 22, 2021
If you saw this Facebook post back in January, you’ll know that Simon’s first completed project of this year was the Capenhurst Woodland Scene. This sculpture was the idea of one person, but was made possible by community spirit and co-operation. It’s a lovely story, so we wanted to share it with you! Thanks to Gary Wright, for his contribution to today’s blog. 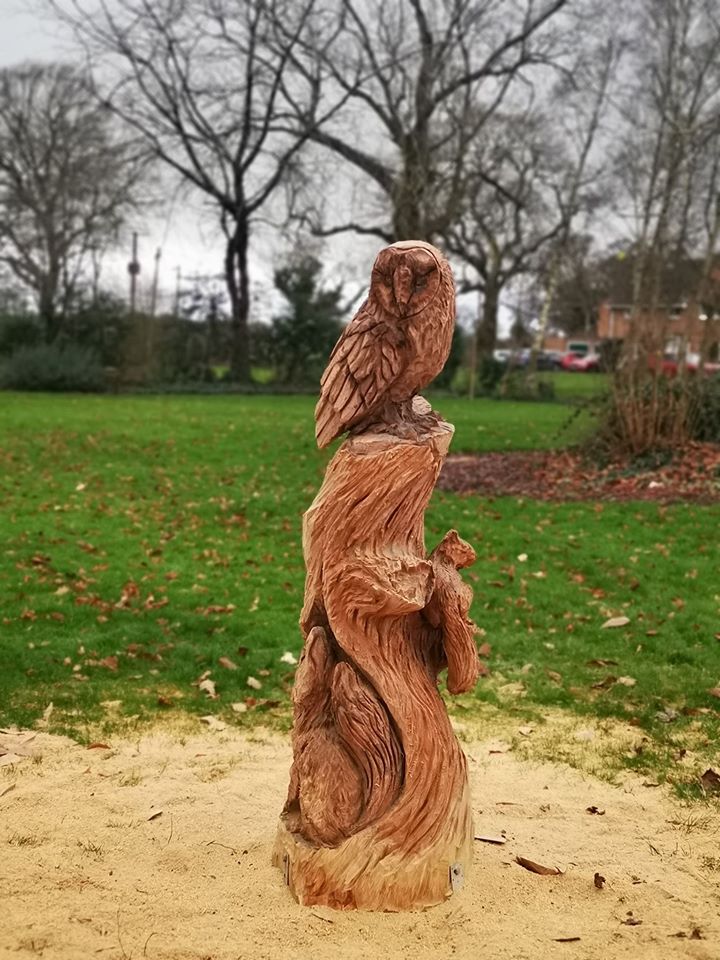 Work in Progess: the Capenhurst Woodland Scene after Day One

The Idea Behind the Carve

A few of the locals in Capenhurst village had been making improvements to the village over the last couple of years to benefit the community. Some of these were small changes, but really make a difference the appearance of the village, and subsequently to people’s mood and mindset. The villagers planted daffodil  bulbs in the grass verges, and installed planters and a bug hotel.
These changes may have been small, but they didn’t go unnoticed. The village entered the ‘Britain in Bloom’ competition in 2019 for the first time. To their amazement and shock, they received a bronze award for their efforts!
Local businessman Gary Wright thought it would be nice to install a focal point on the village green for all to see as they pass through the village. He had recently recovered from illness and wanted to create something to make people smile when passing. Capenhurst is a rural spot with a good array of wildlife, so Gary wanted something to represent this.
Simon has a wide array of sculptures in his wildlife portfolio. These range from isolated sculptures of individual animals, to scenes within a single piece of timber, or even whole sculpture trails with a story and educational purpose. Gary had followed Simon on social media after seeing his work at Erddig National Trust, and thought a wildlife sculpture by Simon would look fantastic.
And so, the idea for the Capenhurst Woodland Scene was born. 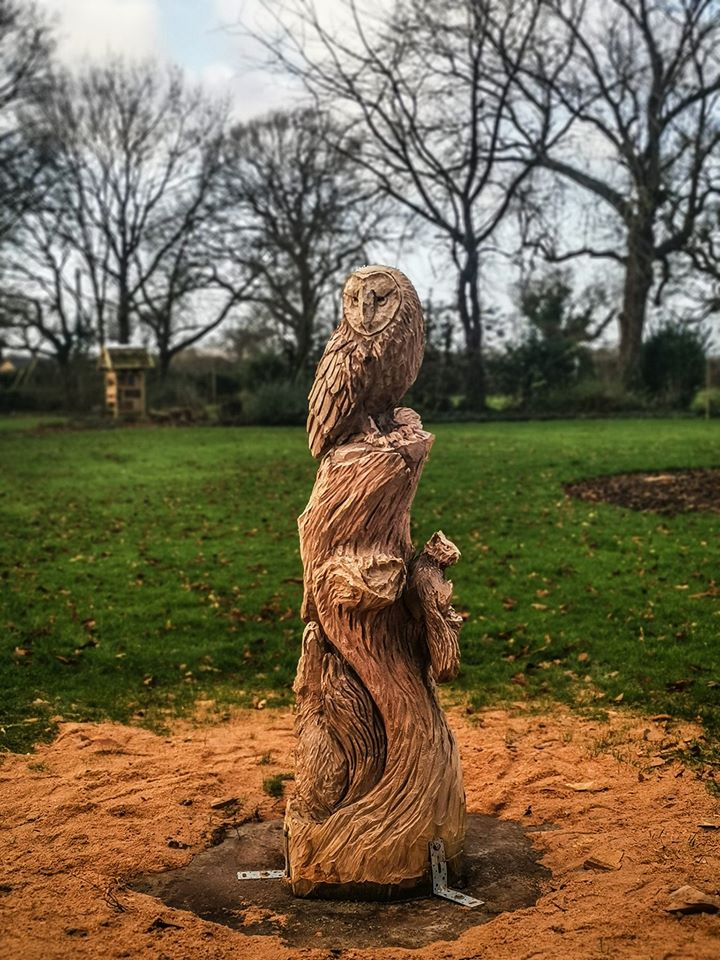 A commission like this which is for the community rather than a private home or business, doesn’t happen overnight. There’s always funding to find, and often a community will need to get permission to erect something new. And then there’s the decision about what it actually looks like! Gary began chatting with Simon about design ideas and costs, and went about making the sculpture happen….

In this case, Gary initially set up a Go Fund Me page to try and raise the money needed. Neighbours began to donate, and funds were slowly building up. However, it turned out Gary wasn’t the only one to think this sculpture would be a good idea. He spoke with Neil Fagan from the neighbouring local major company Urenco, and was amazed to hear Urenco would fund the whole sculpture!
Other companies soon got involved too. Wesley Simpson from Unique Pavings and Landscapes in neighbouring Ledsham agreed to supply and install the concrete footings required for the sculpture. Overall, Gary was overwhelmed with the positive response he received. 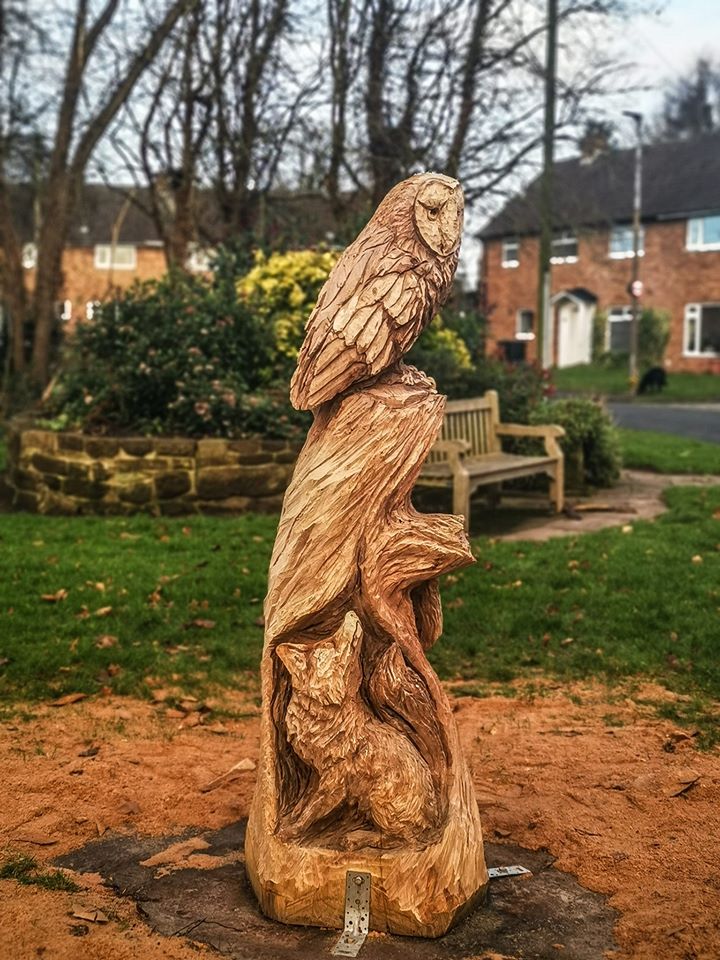 Moving Ahead with the Sculpture

Simon and Gary had agreed on a single piece of timber that would initially appear to be a sculpture of an owl, but would actually be an entire woodland scene. Those who know Simon’s work will have seen this in many other examples. Within the ‘base’ or ‘trunk’ Simon creates other animals, each one telling its own unique story, as well as fitting into a bigger scene.

With this decided and funds in place, Gary agreed a location with the community. Again, for anybody thinking of commissioning a sculpture for their own locale, please don’t skip the permissions! In this case, the parish council and the landowner Urenco approved the location.

Simon created the sculpture on-site in Capenhurst village. As always, he attracted many spectators! A local taxi driver stopped to watch and said that he couldn’t miss watching this being created. He said he’d tell people for years that he had watched it being carved!
Other neighbours took photographs and stopped to talk with Simon. He was even asked to look at some other jobs in the area!

Gary reports that the response to the sculpture has been fantastic:

“People comment on it continuously and it has been visited by the local schoolchildren. It will remain a treasured focal point in the village for years to come.” 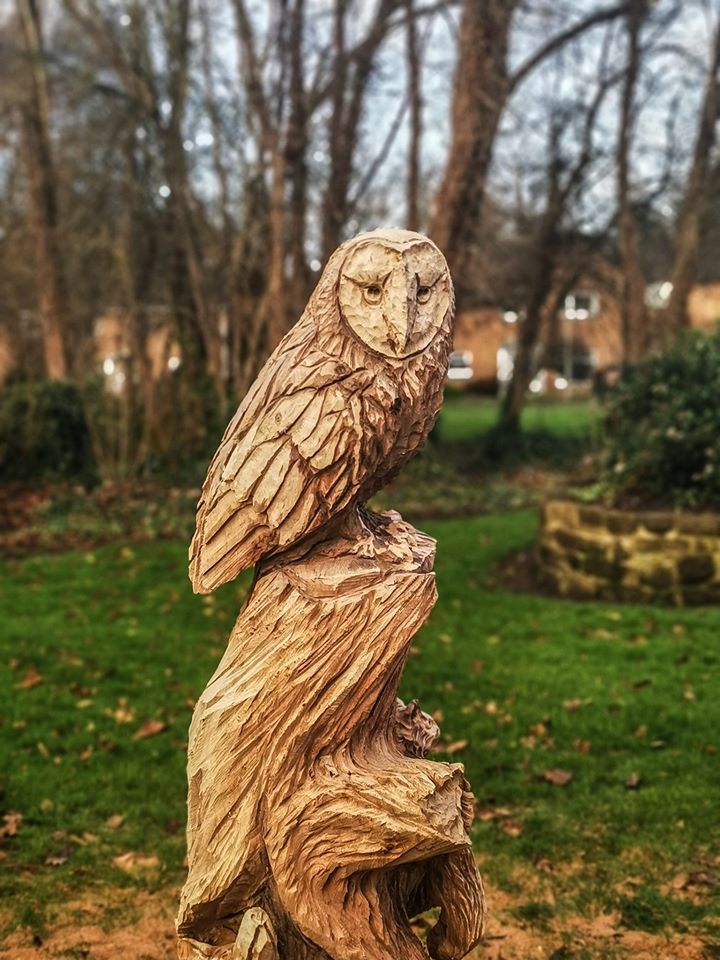 A close up of the owl

What a beautiful sculpture, and what a great story. It’s inspiring to see how one person’s initiative combined with community spirit can come together to create something beautiful.
If you would like to commission Simon for a project in your community, contact us on [email protected] to talk about the details.
You might also like
One of the following
Wellington Heath Jubilee Sculpture
Bill Badger Sculpture and Bench
Lower Farm Sculpture Trail
Recent Posts

The Great Resc-yew (rescue): Two Towers and a Dragon