405 years ago today the world lost a literary legend, 52 years to the day that is is often recognised as being born. Who are we talking about? Britain’s very own bard, William Shakespeare.
To fit the occasion, this week’s blog is the story behind Simon’s bespoke Shakespeare seat at Poulton Hall… 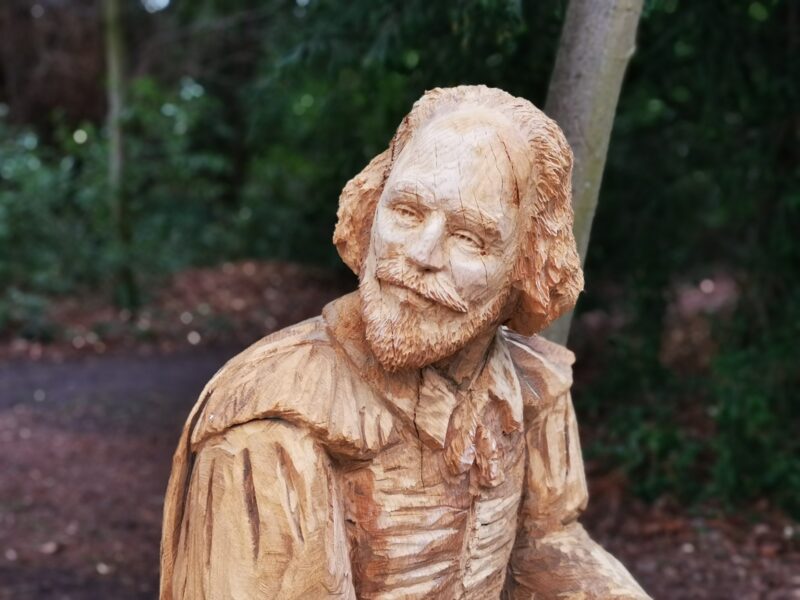 This bespoke Shakespeare seat is installed at Poulton Hall, Bebington. It joins two of Simon’s other sculptures; the Monkey Puzzle Ent and Gollum. If you read either of the blogs about those sculptures, you will remember that the whole estate features literary-themed art.
Poulton Hall is the ancestral home of the Lancelyn Green family. The father of the present incumbent was Roger Lancelyn Green, the author of many well-known books about Robin Hood, King Arthur, Greek Heroes, Ancient Egypt, Norse Myths, Dragons, and all things imaginative and creative.  As one of the Oxford Inklings, Roger was also friends with J. R. R. Tolkien and C. S. Lewis, who was an occasional visitor to Poulton. As a result, many aspects of the grounds have been inspired by imaginative literature.
Although Shakespeare is a departure from this fantasy literature genre, there is no doubt he fits right in among such a rich literary legacy. 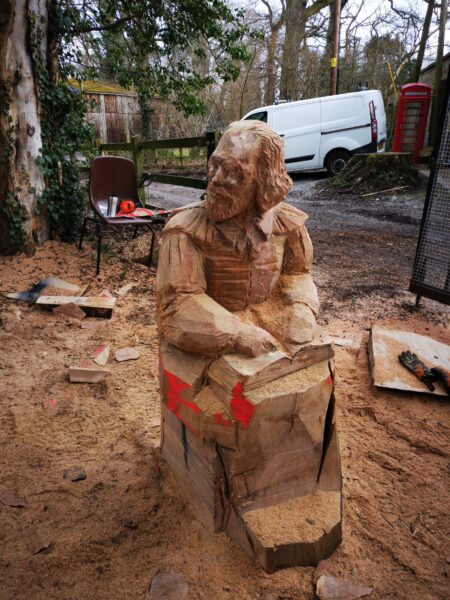 Work in progress on the bespoke Shakespeare seat at Poulton Hall

The Shakespeare seat has been designed as both a beautiful portrait and a seat for visitors. When Simon takes on a commission like this, he is careful to ensure the seating is functional. He also gives his usual attention to the details in the sculpture to create a stunning feature for any private garden or public attraction. In this case, he has chosen to depict Shakespeare sitting on the bench. He has tilted the head to make it look as if Shakespeare has paused his writing to share a conversation with whoever sits with him. That twinkle in Shakespeare’s eye (seen in the first picture) makes it seem that the conversation was humorous! 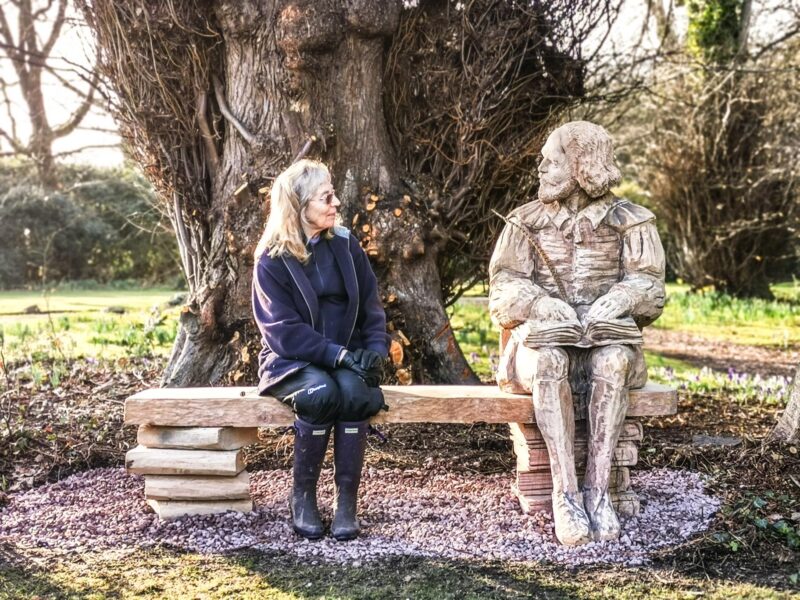 Shakespeare’s position and expression weren’t the only details that Simon thought out carefully. He researched clothing of the period to ensure the clothes and hair accurately showed the fashion of the day. He also discovered a historic disagreement too. It seems people can’t agree as to whether Shakespeare was left or right-handed! As you can see, Simon and the client settled on showing him writing with his right hand.
Although that may not seem important, for clients it matters that the portrait is an accurate reflection of the person.

Another lovely touch is the stack of books for seat legs. Rather than pick titles himself, he wanted the seat to fully reflect the passion and preferences of the client.

As with the decision about Shakespeare’s dominant hand, it may seem a little strange to dedicate so much time to tiny details. However, touches like this are what can really make a work stand out.
It also matters that the client is happy with Simon’s work, so any time there is a detail that is uncertain, Simon will work closely with the client who will make the final decision. 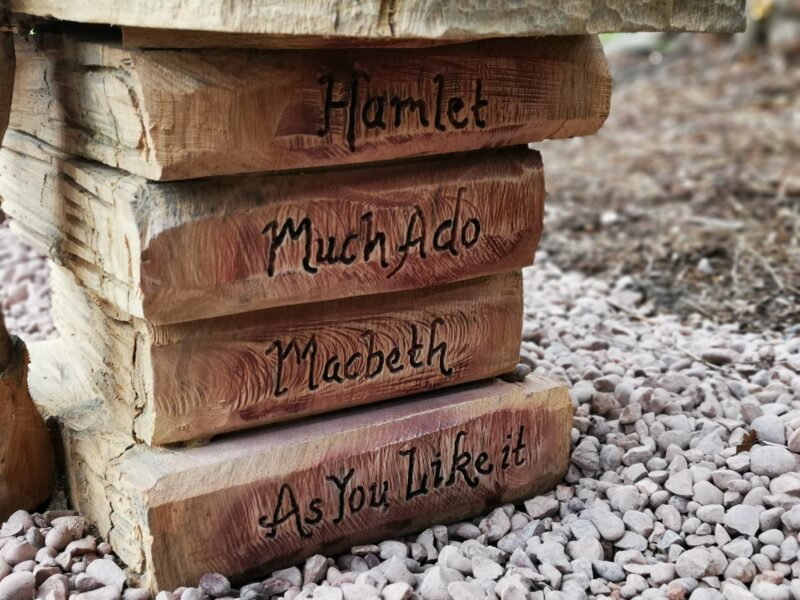 The book titles were chosen by the client to reflect her passions and preferences.

People often ask if they can view Simon’s work. The good news is that it IS possible to see the bespoke Shakespeare seat and Simon’s other Poulton Hall sculptures! The estate opens on certain days of the year, usually in aid of charity. Both the home and gardens are stunning and worth a visit. In fact, novelist Nathaniel Hawthorne enjoyed them so much he even commented on “the fine lawns and the view of the Welsh hills out across the ha-ha or sunken fence”. They are also available to book for weddings. A perfect venue for any literature lovers! You can check the dates at http://www.poultonhall.co.uk/GardenOpenings.html if you are interested in paying a visit. 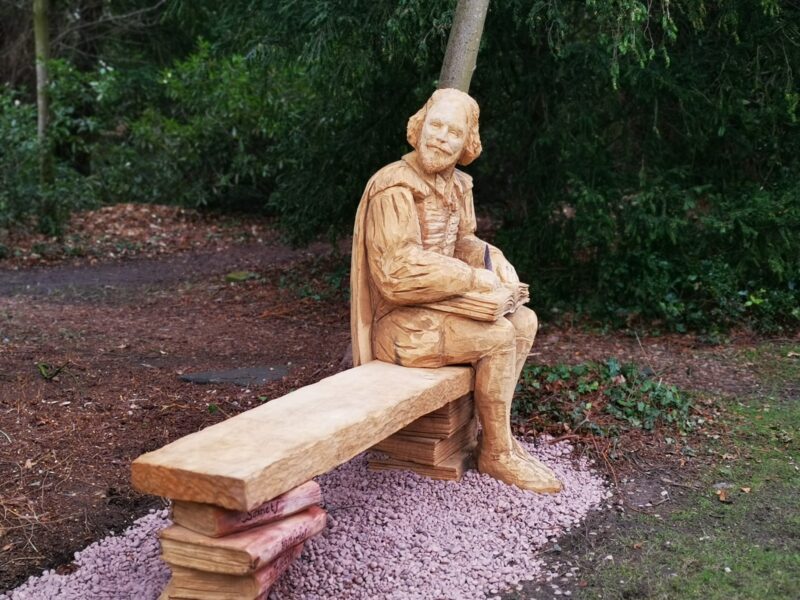 This was one of Simon’s first jobs coming out of this year’s lockdown. It was a great one to start with though as he enjoyed carving it, and the client is delighted with the finished piece. It got us thinking though… if you were to sit and have a conversation with Shakespeare, what would you talk about?

As always, if you are interested in commissioning a sculpture like this for your own home or attraction, contact Simon via the form on www.treecarving.co.uk/contact/ We’re looking forward to hearing from you!

How Do I Care For A Tree Carving Sculpture?