This week Simon was featured on the series opener of Amazing Spaces. It was a great episode, featuring some spectacular architecture and engineering. Simon’s contribution? A 7ft fire breathing dragon! 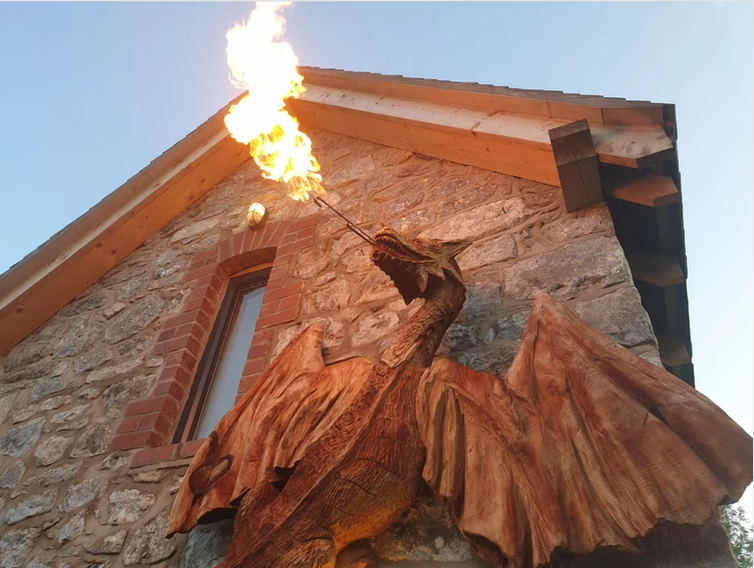 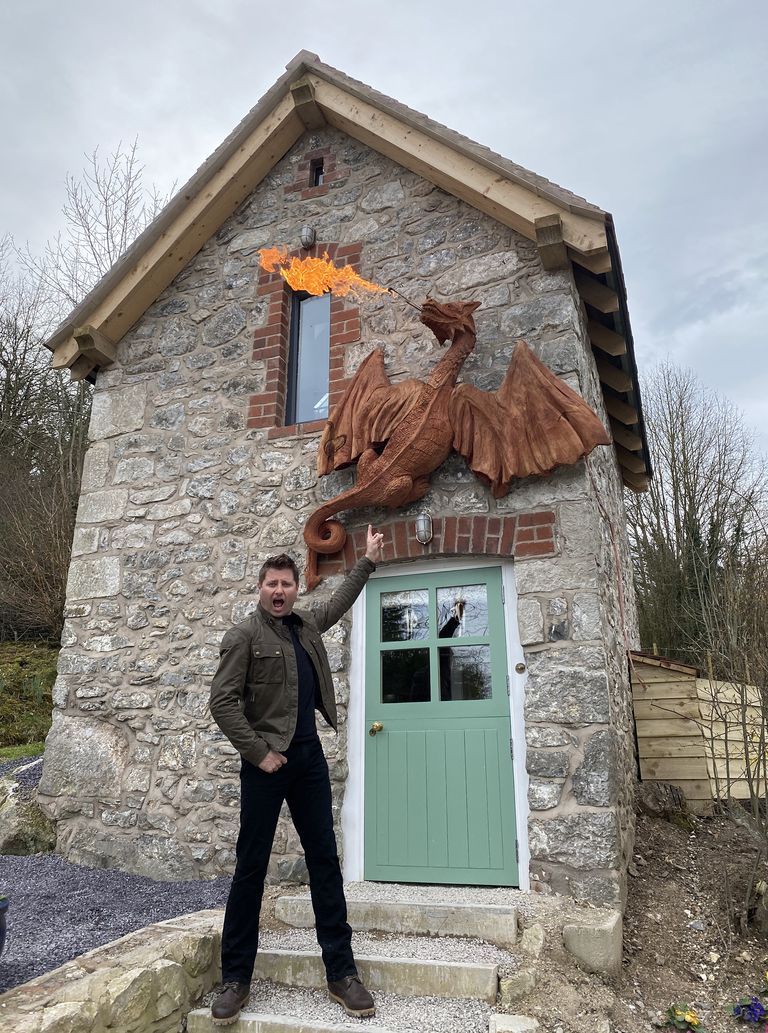 The building itself is incredible. When Guy and Tracey bought their property, it came with a small stone building, which was a former bakehouse. Although it only measures around 3m x 2.5m, they had the idea to turn it into a little crash pad/den. A mini-house!
Space was obviously going to be an issue. Guy is a gifted engineer though and came up with an ingenious fix. In his own words:

“Your bathroom only needs to be big when you’re in it, so I figured you could have the whole bathroom wall moved across and stuck on the wall, and when you need it, pull it towards you to create the bathroom”

That’s right! Guy created a disappearing bathroom to maximise the space! George Clarke was so impressed, the property now ranks in his top three builds!

GCAS Series 9, Episode one on Wednesday, C4 9m… It's all in the details! pic.twitter.com/1HoSJXnCAp

Now finished, the property is a beautiful little getaway, ideal for a couple. Once lockdown is over, it will be available to rent via www.thedragontower.co.uk. If you are impressed with the creativity and engineering, you can also follow them on Twitter where they share more about the process. 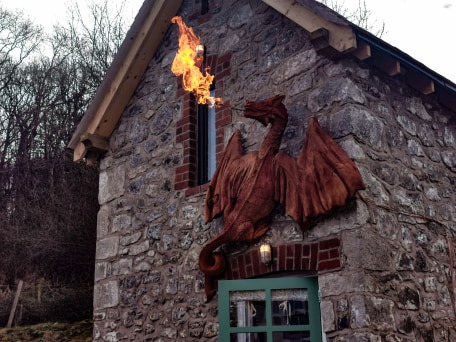 The Story of Maggon the Dragon

The idea for Maggon the Fire Breathing Dragon came from Tracey. The fairytale look of the bakehouse captivated her, and she made a joke about needing a dragon to protect them. Tracey is also a big fan of children’s literature and illustration and had always wanted a piece of fantasy art. And so from there, the dragon commission was born! They also had the idea that he could breathe fire when the doorbell rang. Such a fun, and creative finishing touch to a creative and ingenious renovation!

Initially, they planned on making the dragon themselves. But then, they met Simon. His portfolio includes many incredible dragons, including the well-know Dragon of Bethesda. His background as an illustrator also tied in with Tracey’s love of children’s illustration. So all in all, he was the perfect fit for this commission. 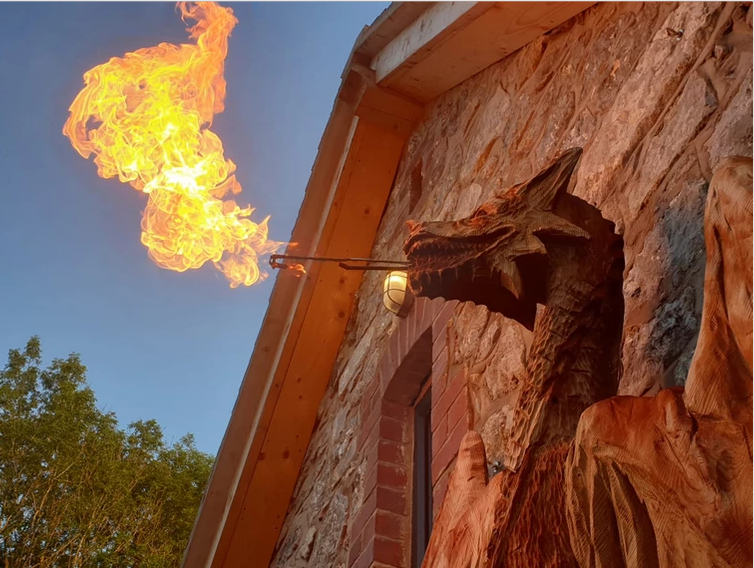 Maggon is 7ft and made from a fallen redwood tree. The warm red colour is perfect for this property in North Wales, as it reflects the red dragon on our flag.
Nerd alert! In dry climates, redwood actually becomes a lighter-silvery tan shade if left to weather naturally. These clients needn’t worry though. In damp climates, redwood darkens, so the North Welsh weather will mean that lovely red colouring is retained for years to come.

The most obvious challenge for this commission was how to make it breathe fire! In this case, Guy had a plan, and Simon’s role was to create a cavity within the sculpture for the propane pipe. If you saw the episode you will have heard Tracey joking about the dragon breathing fire when the doorbell rings. So, for the curious among you.. yes, it is really connected to the doorbell! However, Guy and Tracey wanted to make the fire breathing dragon as environmentally friendly as possible. For this reason, they limit his ‘bursts’ using their own control box – which also helps limit accident potential! Health and Safety matters!

Another problem for Simon to think through was the installation. The dragon not only needed to breathe fire but was going to be mounted on the wall of the house – as if it was climbing towards the window. This meant keeping strictly within certain specifications so it would fit the space. It also meant Simon needed to create the dragon in sections so it would be easier to mount on the wall. Being able to visualise this and take account of it in the design is an essential aspect of larger projects. 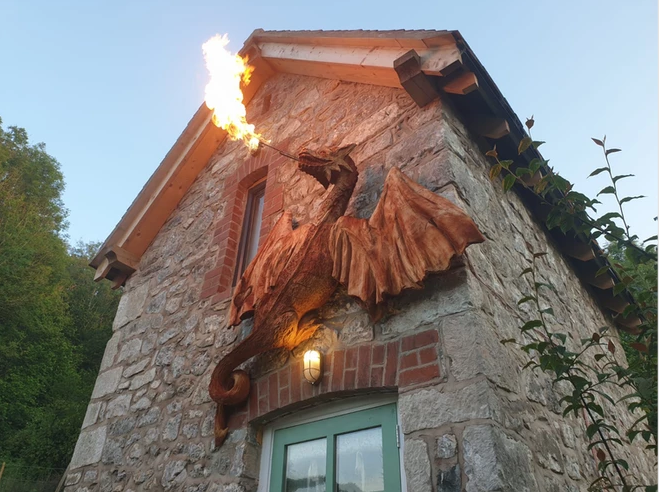 Simon used a few different Stihl chainsaws with various bars to create the main shape of the dragon. He also used these to begin to add a few cuts that give depth, and some of the more general shape and texture. No dragon is complete without scales though! Simon created the scales with the Manpa Tools Multicutter with a round cutter attachment. The friendly grin (we didn’t want Maggon scaring off guests!) and other facial details were created using Saburrtooth burrs.  The flame-shaped burr is an especially useful tool for these projects. You can see a bit of a ‘before and after’ in this photo, Tracey and Guy took in the workshop. Simon has created the main shape and some details with the chain saw, and begun to add the scales with the multi cutter around the dragon’s hind legs.

Although it took several days to create Maggon, you can watch the process in under a minute! What are your guesses for who the sculpture in the background will be?

Being on Amazing Spaces

As an artist, it is always an honour to have a piece featured on television. The focus of the show was the build itself, but Simon did also get to meet George Clarke on unveiling day, and enjoyed a good chat! He also loved seeing the build too:
“It’s incredible what they’ve managed to do with such a small space! It was great to be involved and to add to a project like that.” 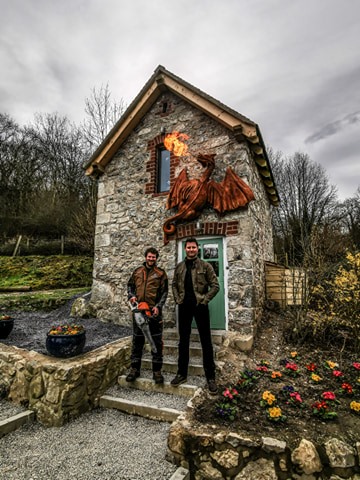 Simon with George Clarke and a trusty Stihl chainsaw!

Thank you to those who took the time to comment on social media. It is always lovely to hear from you, and we’re touched by all the great feedback.

If you have a rental property, a novelty piece of art is a GREAT way to make it stand out, and to attract attention – and gain business! If you have an idea for your home or rental property, why not have a chat with Simon? Contact us using the form on www.treecarving.co.uk/contact/ and someone will be in touch! 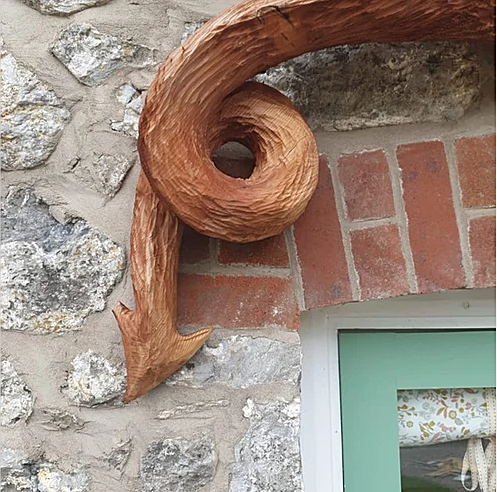 Thank you for reading our blog! Don’t forget to subscribe to make sure you don’t miss any of our posts.

A Memorial Sculpture for Robyn